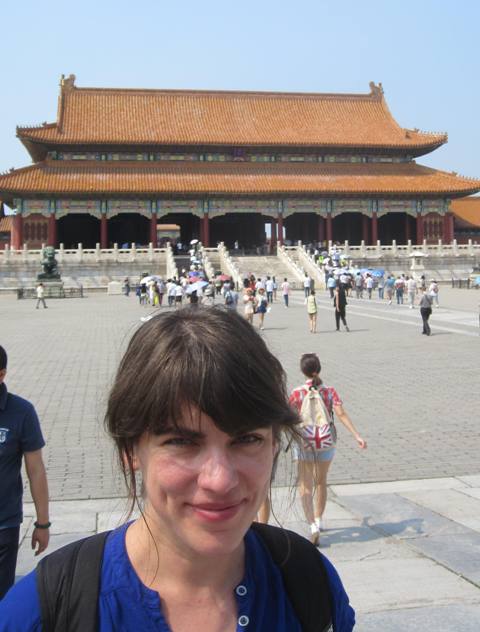 The Forbidden City, like the Great Wall or the Terracotta Warriors, is on every top-10-things-to-see-in-China list.  Oh, fine.  Probably not on every list, but close enough.

I think the first time I was introduced to this landmark was when I saw The Last Emperor waaay back in the day.  The scenes of the Forbidden City, even as a short-attention-spanned youth stuffing her head with too many “historical romance” and parochial Victorian novels, filled me with a sense of wonder and mystery.  Where was this place?  I had visions of one day visiting, perhaps  traveling for hours through wind-swept plains via horseback to finally spy the shimmer of this mystical metropolis on a pastel horizon.

Well, twenty-five years later, my vision has been realized.  Except I didn’t arrive by horseback, I arrived by subway.  And the Forbidden City isn’t cloistered in the tundras of north China, it is right smack dab in the middle of downtown Beijing.  Smack. Dab.  As in, less than 100 feet from the subway stop.   Directly right across from Tienanmen Square, in fact.

Built in the early 1400’s, the Forbidden City served as home base for the Emperors of China from the Ming to Qing Dynasties (around 500 years!).  The “city” covers an amazing 7,800,000 square feet, and while once truly forbidden to pedestrians such as myself, it is now open to the public for a mere 40 to 60 RMB (former price November through March, latter price April through October).

Listed as one of China’s many UNESCO World Heritage Sites and known also as the Imperial Palace or the Palace Museum, the Forbidden City can be an intimidating — and bewildering — place to visit.  Once inside the imposing walls, the city itself sprawls out flat as a pancake with grey cobblestone and cement, interspersed with the brilliantly painted palaces and halls that rise from the monochrome sea like bejeweled pyramids.

Crowds can make it difficult to see into some of the halls (many are not open to entry) but I think for me, it was just the pure feeling of vastness that really struck me with a lasting impression.  It is difficult to imagine this place as it must have once been: bustling with servants and diplomats and courtesans and royalty.  I’m not sure how to put it, but even with tourists everywhere, I had this feeling of looking at an ocean bed that had dried up centuries ago.  It was beautiful and solemn and something else, too, but I’m not sure what the right word is.

There is a Hall for everything in this Forbidden City: a Hall of Harmony, a Hall of Mental Cultivation, a Hall of Peace and and Hall of Literary Glory.  There is even a Clock Exhibition Hall (extra admission fee of 10 RMB) displaying timepieces gifted to His [various] Majesty[ies] over the course of the Qing Dynasty from other countries.

The three main halls: The Hall of Supreme Harmony, the Hall of Middle (or Central) Harmony and the Hall of Preserving Harmony are the first sequence of elevated structures one finds once entering the inner gates.

The Hall of Preserving Harmony displays a large marble ramp-like relief outside festooned with dragons and pearls.  This relief is almost 6 feet thick, 10 feet wide and runs over 54 feet up to the Hall in one single piece!  It is said this slab was hauled over 43 miles (70 kilometers) to the City during the winter, and to facilitate its transport, wells were dug every 1600 feet along the way so that water could be poured upon the roads to create an icy surface for a ski-like transfer.  This was back in the 1400’s!

But I think our favorite hall was the amusingly named “Palace of Earthly Tranquility.”  Favorite because this “palace” was a little bit tucked away from all of the bustle, and amusing because, to me, the concept of one area containing both the bridal chamber as well as the palace’s harem does not a recipe for Earthly Tranquility make … but I guess those were different times.

Aside from the plethora of halls and palaces and temples and pagodas, there is also an Imperial Garden on the way out of the Forbidden City, complete with a man-made “mountain” (more like a grotto-looking hill, really).  After a few hours of walking under the direct sun and squeezing through crowds, the garden proves a great place to decompress before leaving through the city’s north gate.

How to get there:  If you are not on a private tour, the easiest way to get to the Forbidden City is via Line 1 of Beijing’s fantastic subway system.  Just take Tienanmen West or Tienanmen East exit and it will put you on either side of the south-side Meridian Gate, which also serves as the Forbidden City’s entrance.

Thus concludes this self-guided tour of the Forbidden City.  Strangely enough, as Sam and I headed out the gate, I realized that I found the most scenic part of our visit to be the workers everywhere with their brooms and their carts filled with garbage.  It felt like a juxtaposition to the sterile emptiness all around I think, because these people were the only ones here actually in a capacity similar to what the Forbidden City in its day would have seen.  They were the only thing about the place that seemed real.  The rest of us were just gawking tourists or vendors … or people dressed up in costume with blue jeans underneath!