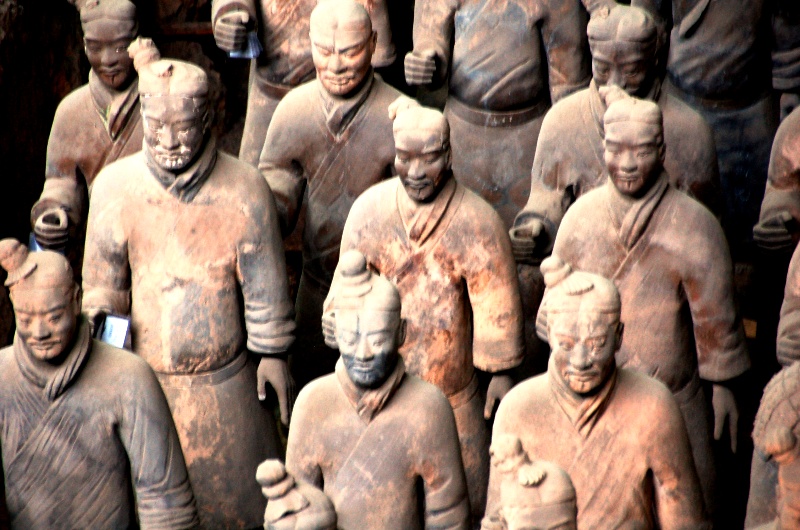 Sam and I have been in China four months now!  One-third of a year!  One hundred and twenty-two days!  Basic greetings, conjunctions, taxi directions, numbers 1 to 100 and bartering banter learned thus far in Mandarin! And for me, this also coincides nicely with having finished my draft of The Orphan of Torundi!

To celebrate our one-third-year anniversary in China, Sam took his first allotment of paid time off and booked us tickets to see the famous Terracotta Warriors of Xi’an.

Discovered in 1974 by peasants digging a well, these clay soldiers date back to 246 BC when the tomb of unified China’s first emperor, Emperor Qin Shi Huang, was first begun. Like the Egyptian pyramids, the Emperors of China developed vast mausoleums for their after-world life, but Emperor Qin took this idea to a whole new level.  Not only did he create an entire clay army for his spirit’s continued protection, he created an entire underground city.  While the city and his tomb have yet to be excavated, legends of mind-dazzling wealth, rivers flowing with mercury and elaborate booby-traps conjure up images of Indiana Jones, Laura Croft and perhaps a future installment of … Liberty Frye! (UPDATE: This TongaTime post was originally published in 2013.  Since that time, the aforementioned future installment of Liberty Frye has been released into the wild!) 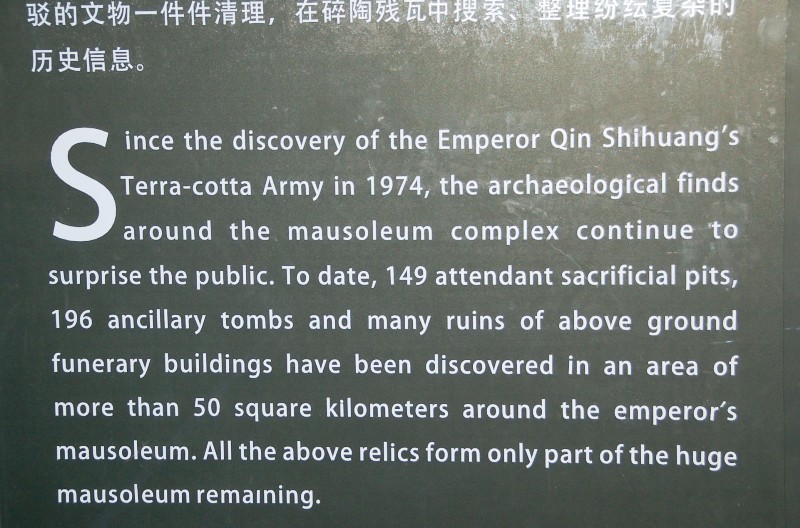 Today, several pits of Emperor Qin’s unearthed warriors are open for visitation, albeit in rather un-ambianced buildings that ensconce the once elaborate, underground kingdom.  Labeled in three separate buildings as Pits 1, 2 and 3, visitors push past throngs of tourists (and I do mean throngs — it is crowded) to peer over the metal railing, into the excavation below. Pit 1 is the biggest, with over 6000 life-size warriors (not all of them view-able), each one unique from the next. 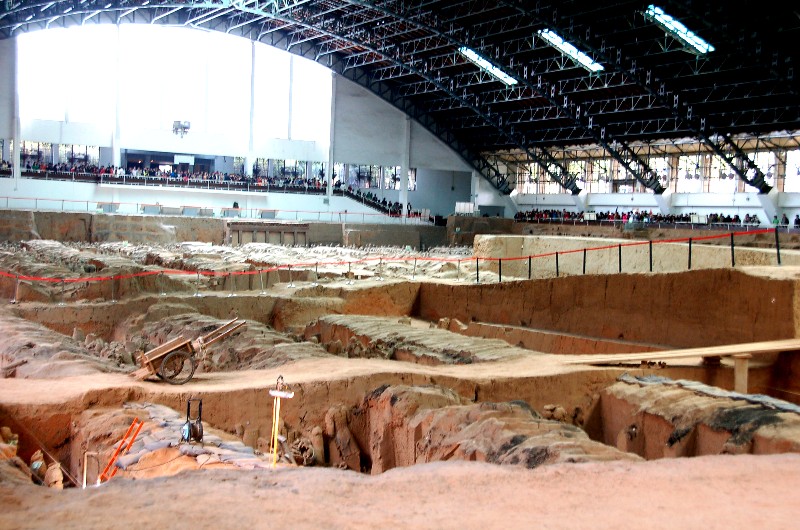 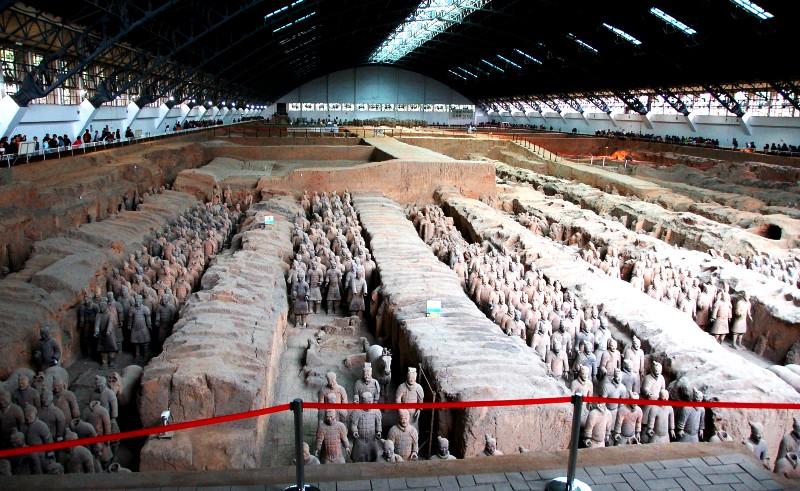 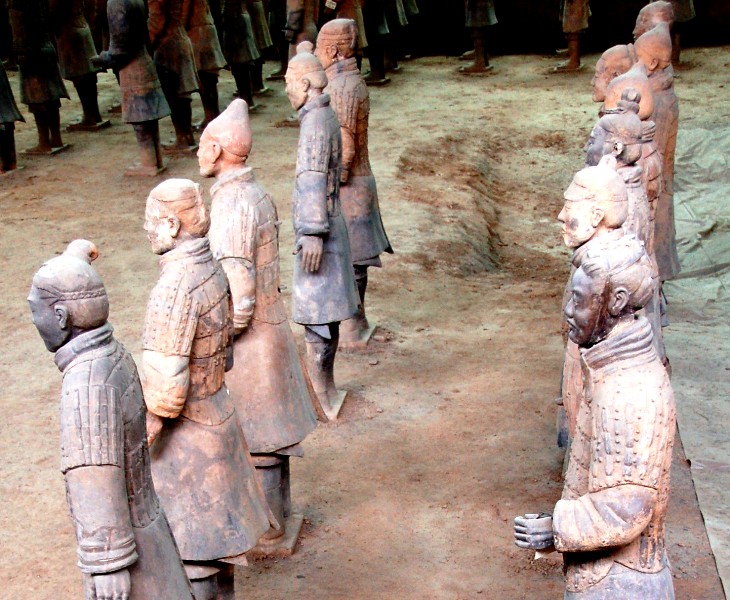 Our thoughts? We’re grateful to have had the opportunity to see them — the details on each warrior are fantastic (Elaborately braided hair! Shoe treads! Buckles and rivets and textile weaves!) but honestly, I would say it was a bit of a disillusionment, too. There were so many people literally pushing by and over and between, that the experience was unsettling. Also, viewing the excavation from above and afar — while completely understandable from a preservation point of view — kind of killed the mood. Maybe that’s why, a few years back, an enterprising German art student decided to make the most of the situation by dressing up like a clay warrior and joining the ranks for real? Now that would have been interesting.

How to get to the Terracotta Warriors Museum

The starting point for most visitors is via the city Xi’an, which is about an hour by bus from the Terracotta Warriors museum. We booked flights through Ctrip for Xi’an.

Options to visit the museum include by public bus or private tour. We chose the public bus option, which is cheaper and obviously more independent, but if you want to see several sites in one day other than just the Terracotta Warriors, it would make sense to book via a tour as independent travel in China can be rather confusing and time consuming!

By Tour:  Hotels, hostels and websites like Ctrip have tons of tour options to choose from. 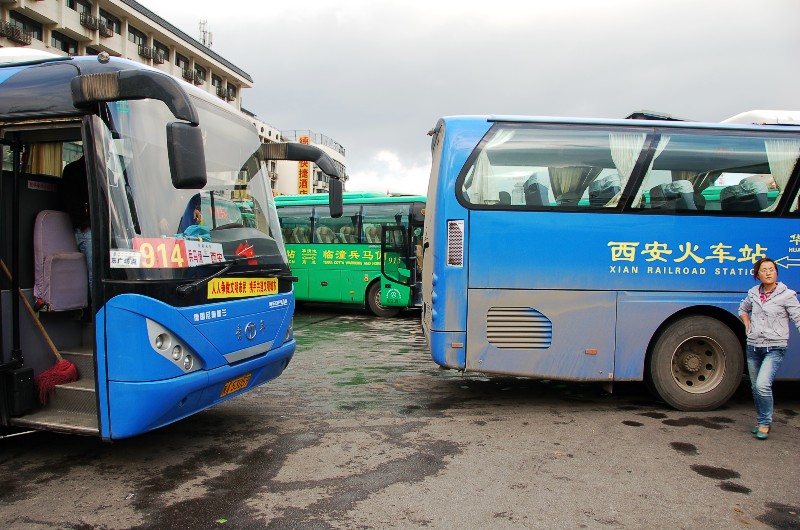 By Bus: From the Xi’an north train station (located just outside Xi’an’s awesome city wall), a league of buses depart every few minutes for the Terracotta Warriors.  You can take public bus number 5(306) or the brightly colored blue or green buses labeled “Xi’an Railroad Station – Terra Cotta Warriors and Horses.”  The cost is 8 RMB one way (about 1.20 USD) and a few stops to other sights such as the hot springs are made en route, which can be confusing.

For example, on the way to the Terracotta Warriors museum, our bus (we took a blue one) stopped by the Huaqing Hot Springs and announced something in Chinese. Sam and I were making small talk and taking in the scenery when we became acutely aware that the occupants of our bus had all turned in synchronicity and were now looking at us, as if expecting an answer. We looked from them to us and back again, not having a clue what was going on but realizing that we’d obviously missed something crucial. Happily, a young woman in front of us explained in English that our bus would not be going any further than the hot springs stop and that we were to get off and get on the other blue bus that had just pulled up in front of us. So, Sam and I got off our first blue bus and got on the second blue bus, hoping we were in fact still on the way to our museum! The driver waived merrily and then we were chugging down the road once more. About ten minutes later, we pulled up to the bus parking lot near the museum and all was well! 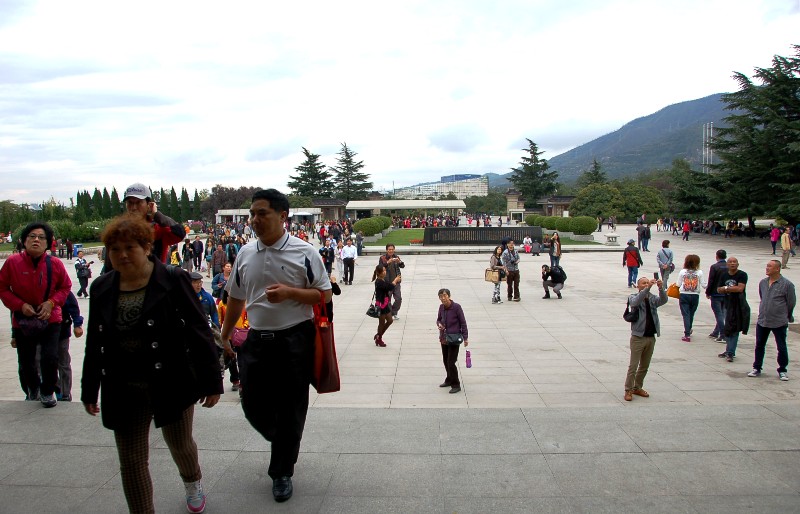 What to expect of the Terracotta Warriors Museum

The parking lot area is filled with restaurants and souvenir shops, but simply follow the signs to the museum. As with the Badaling Great Wall, you will walk quite a distance through landscaped, outdoor shops and eateries until finally reaching the ticket booth. Tickets cost 150 RMB per adult (the tickets are labeled “Emperor Qinshihuang’s Mausoleum Site Museum” lest you see this and suspect you’ve got the wrong thing).  Once you’ve purchased your ticket, you must then turn and follow the cement walkway that passes a (gross) restroom area (alert: free, cleaner restrooms are available once you are inside the museum gates) and more restaurants before entering the pedestrian entrance.  If you pay 5 RMB more per person (we did not), you can enter the park through the gate right by the ticket office and hop on a trolley that will take you to the museum.

The museum itself is composed of four buildings: the one to the far right is crammed with displays and exhibits while the other three contain Pit 1 (the largest — with over 6,000 warriors), Pit 2 (around 1300 warriors) and Pit 3 (the smallest — with around 70 warriors). 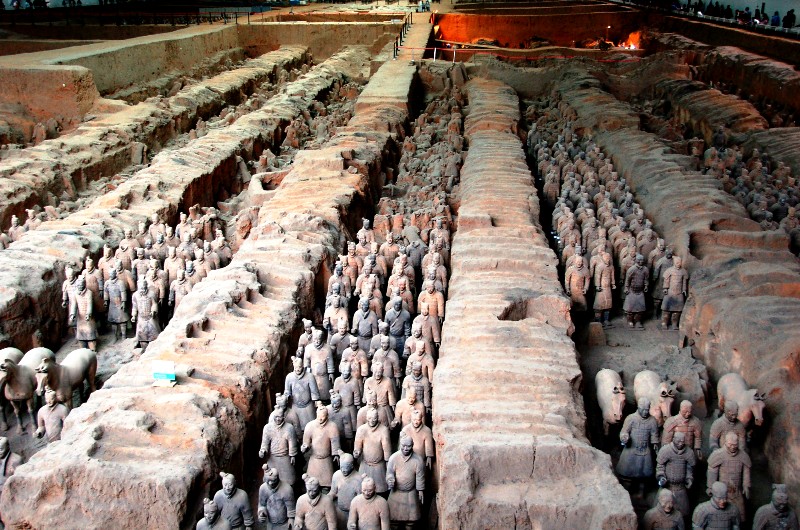 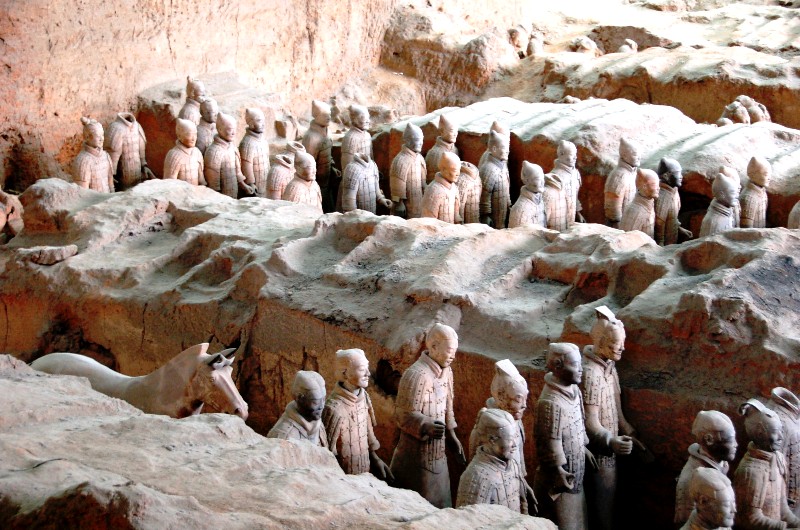 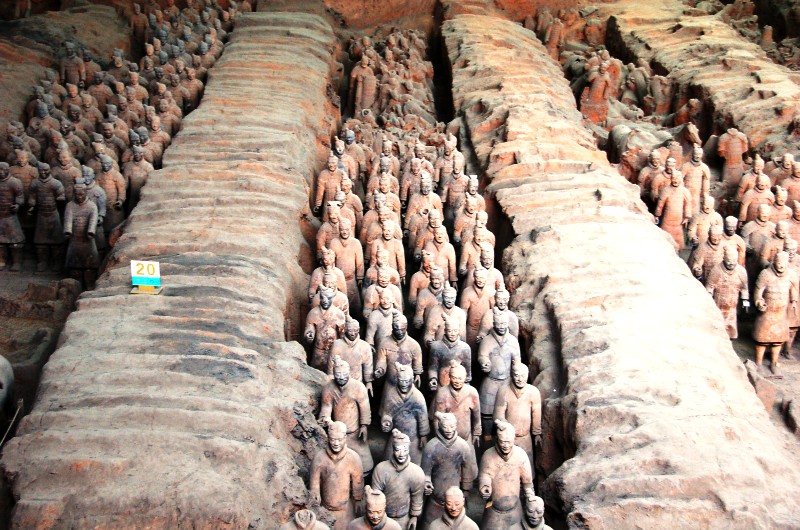 3 thoughts on “Terracotta Warriors: How to Get There, What to Expect”