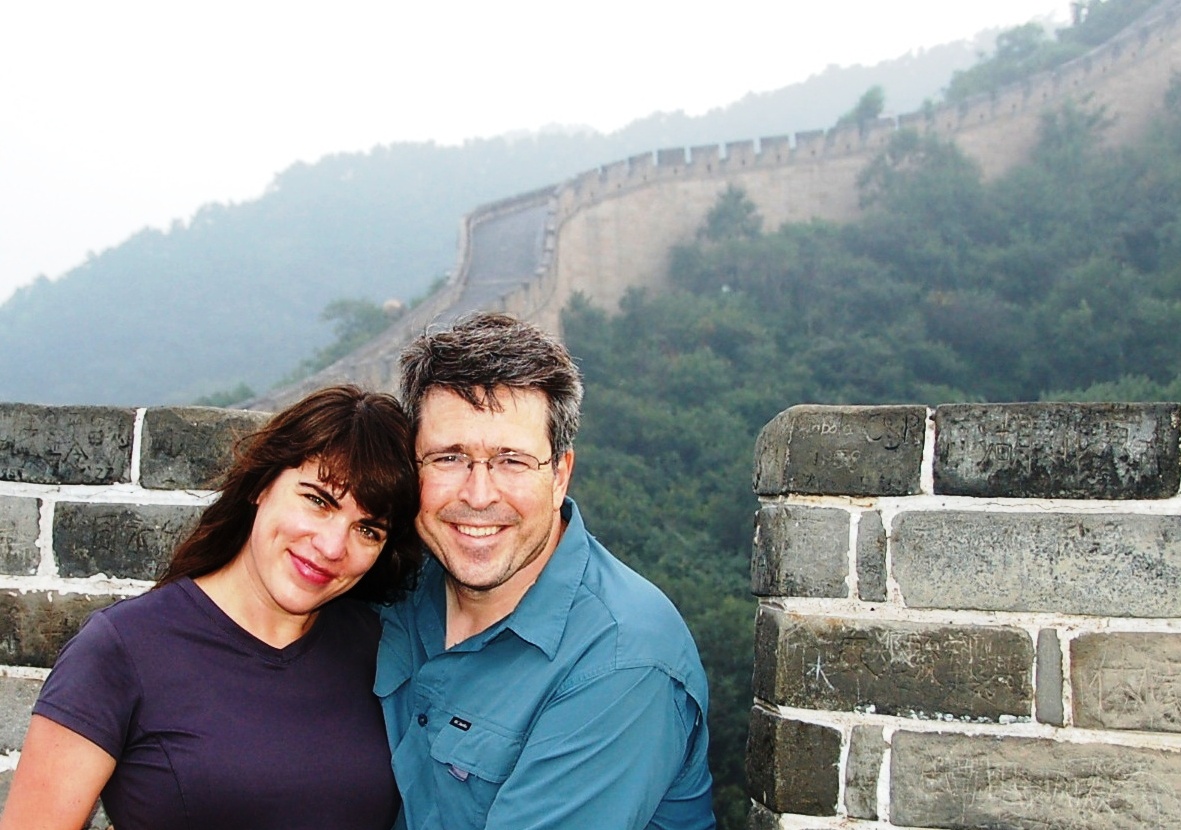 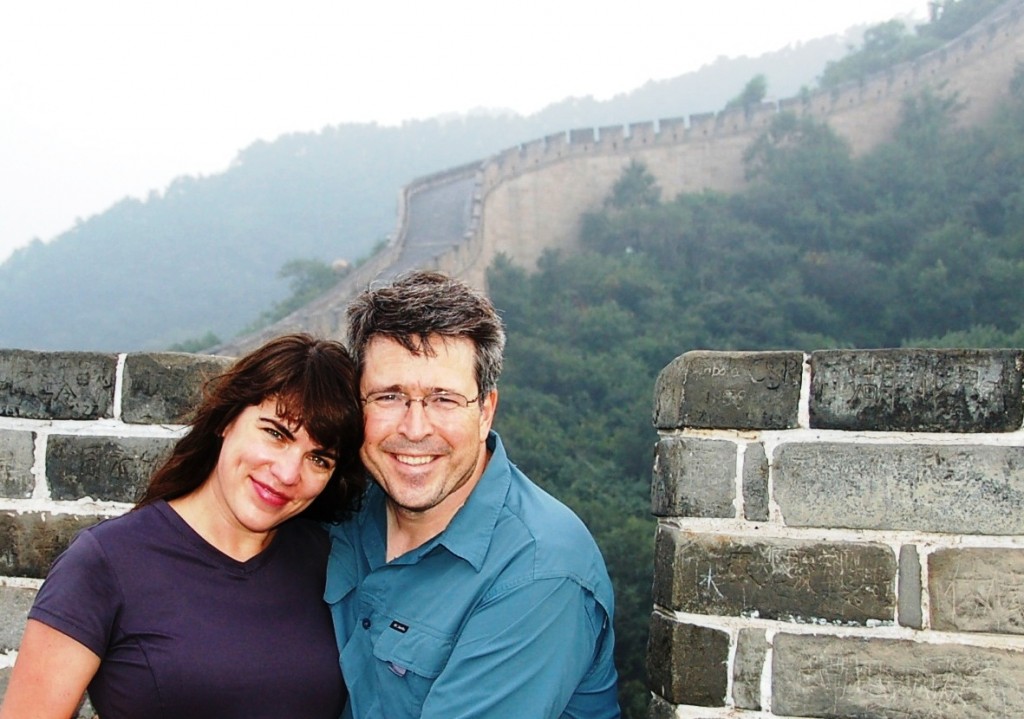 So, we finally did it, the Grand Poobah of many What-To-See-In-China lists:

That serpentine wonder whose image graces practically every Chinese restaurant.  That misty, sprawling feat of human endeavor recognized as one of the New Seven Wonders of the World.  That singular, man-made structure that is so magnificent in size and scope that the good people of earth [erroneously, it seems] claim is visible to the naked eye from … outer space.

And come to find out, “The” Great Wall is, in fact, many great walls.  Parts were actually constructed in non-continuous sections that stretch over 5500 miles, built mostly from 221 BC to 1644 AD.  Over the period of almost two thousand years!  Today, the “main” portions of the Great Wall are Juyongguan, Badaling, Mutianyu, Jinshanling, Gubeikou, Huanghuacheng and Simatai.

The usual starting point to visit the Great Wall is Beijing.  From Beijing, there are many tours to choose from, be it from your hotel, a travel agency, or a local guesthouse/hostel (probably your best bet out of these three — I saw an advert where we stayed for a Badaling and Ming Tombs day tour for 200 RMB per person).  Or you can book online through a travel agency (no insight there).

Or, or, you can do it yourself.

The latter was our option.  We took Beijing’s tidy S-train (19 RMB up and 6 RMB return) to the most frequented, and thus most easily-visited portion of the wall — Badaling.

The scenic journey is approximately 80 kilometers from Beijing, and the train ride from the North Beijing Train Station to the Badaling Station is about 1 hour and 20 minutes, but you must also account for waiting times.  We discovered that the scheduled trains are sometimes canceled without announcement, so even though we should have been able to catch an earlier train, we ended up waiting over an hour for the next available one to arrive.

Also?  The S-train has no assigned seating, and passengers take their boarding quite seriously.  People were literally running to board the train, which was a bit stressful as we thought we’d end up standing on the roof or something.  Come to find out, there were plenty of seats to spare.  This probably would be quite different if it were a holiday or weekend.  I have not witnessed this first-hand, but I have seen photographs of train rides during holidays where literally every spare centimeter of cabin floor and seat were occupied.

There are also buses that go from Beijing to Badaling (and other portions of the Great Wall) and I found this website helpful in describing the various transportation options.  And this link provides more information on Badaling.

Helpful tip:  If you choose to go to Badaling by S-train, your ticket will be issued in all-Chinese characters, which becomes doubly disorienting when you notice that the departure billboards within the station list your destination as “Yanqing.”

I do not pretend to understand this, but the train does indeed
go all the way to a solitary, mountainous station that is not Badaling.  This station is Qinglongqiao.  No one actually disembarks here, but  a stalwart guard stands at perfect attention amongst his dusty plain of orange-brick platform, where, I suspect, Werner Herzog may find a very rewarding documentary project.  From here the train then regresses backwards through the mountain track, back through the dark tunnel, back through the rows of trees and finally, stops at Badaling.  You disembark here.

From the train station, you walk about a kilometer to the Great Wall Badaling entrance, passing various restaurants and souvenir shops on the way.  Signs (in English) point you in the right direction.  The entrance fee for the wall alone is 45 RMB per adult, which you can pay at the base or right before the Great Wall entrance gate.

And then, and then? 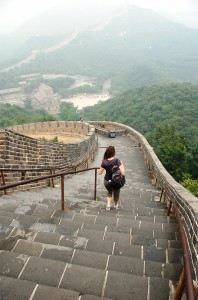 Well, it was not just another brick in the wall.  It was AWESOME.  Now, granted, we went on a Monday, so the crowds were minimal from all I’ve heard and thus, we might have had a better experience than many.  And yes, this part of the wall has guard rails and refurbished steps and security cameras all over the place, but even still, it was pretty cool.  It’s the freaking Great Wall!  And it’s magnificent.  And the way the wall goes up and down all over the mountains is so pretty.  And all those non-leveled steps and walkways make you feel like you’re in a fun-house.  And its got all those photogenic S-Curves.

And did I mention it was pretty?

The Badaling section of the Great Wall is just under five miles long, but you’d never know it from here.  Those towers and grey, stone walkways snake into the clouds, as if they go on forever, and lend a certain Jack-and-the-Beanstalk kind of feel.  And if you are a hiker, even these measly 4.7 miles will give you a work out, because this sucker is steep.  It is a bit of an equilibrium test as well, because the walkways in those misty realms are not level in the least; they undulate like the back of a dragon (fittingly!), so that you have the feeling as if you were walking through some sort of Dali painting.

Weather-wise, it couldn’t have been better.  We went last weekend, which is early September, and the misty cool of the mountains was a welcome reprieve from the somewhat muggy climes of Tianjin and Beijing.  If you go in the summer, it would be hot, hot, hot, as there is no real shade since the wall provides the spine of the mountains.  There are stalls all the way to the wall entrance selling goods, water and snacks, as well as a few enterprising folks pedaling water and magnets once you’re on the wall as well.  Even so, if you go in the summer, it would be wise to bring your own water, just in case.

Once you’ve depleted your glycogen stores, just head toward the bus stop area.  You’ll walk down a covered passageway where kiosks sell t-shirts and pendants and every other kind of I’ve-Climbed-The-Wall paraphernalia.  Toward the bottom of this tiered market, food items will appear, ending in a nice food-stall at the very base where one can score some tasty Chinese food for a pretty decent price, considering the location.  Once done, you can choose your transport back if you’re not on some sort of tour.  We returned by train, taking in the scenery as we returned to Beijing’s bustle.  From there, we caught the high-speed rail back to Tianjin.

The actual visit to the wall only lasted a couple of hours, but getting there and back took the entire day.  Was it worth it?  Absolutely.  In our opinion, it is one of those rare sites that actually lives up to its reputation.

But most importantly, Sam can now declare with absolute authority that he is beyond doubt, a “True Man.”

And did I already mention that it was pretty?

4 thoughts on “The Great Wall of China (Badaling Section)”