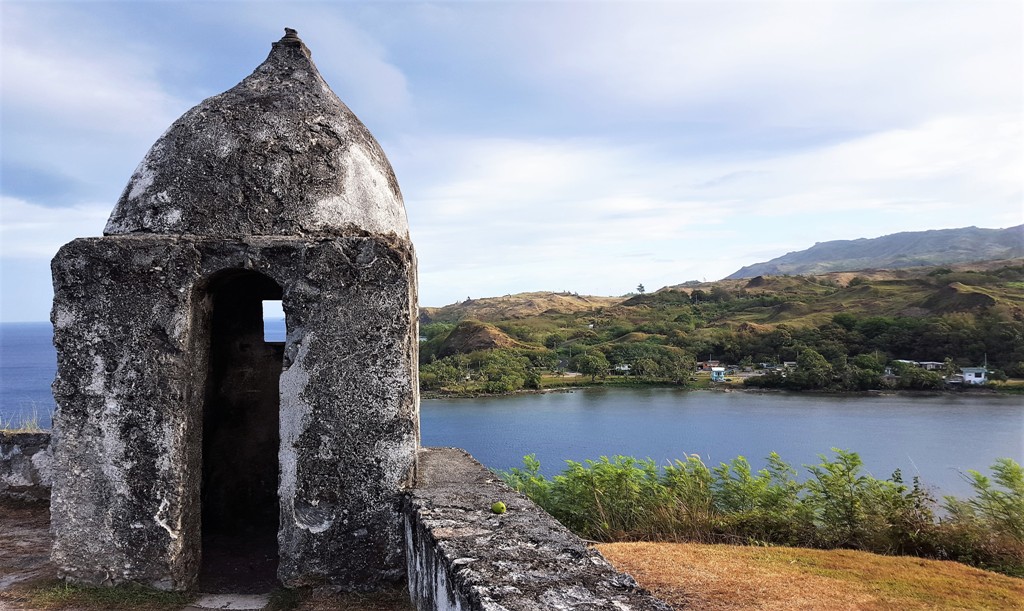 If one could imagine the most opposite place to the White Mountains of New Hampshire, it just might be the tropical waters and palm-tree lined streets of Guam.

And since I’m a little fascinated with ironies, it’s fitting that, a year ago today when we still called Balikpapan, Indonesia our home, Sam and I thought with 99.9% certainty that we’d be making a move to Guam in the near future.

I’ll spare you the details.

Suffice it to say, things like this are bound to transpire when you leave the normal patterns of life, career, etc. and embark upon livable travel adventures. That’s what makes it an adventure, right? You never know what’s going to happen! 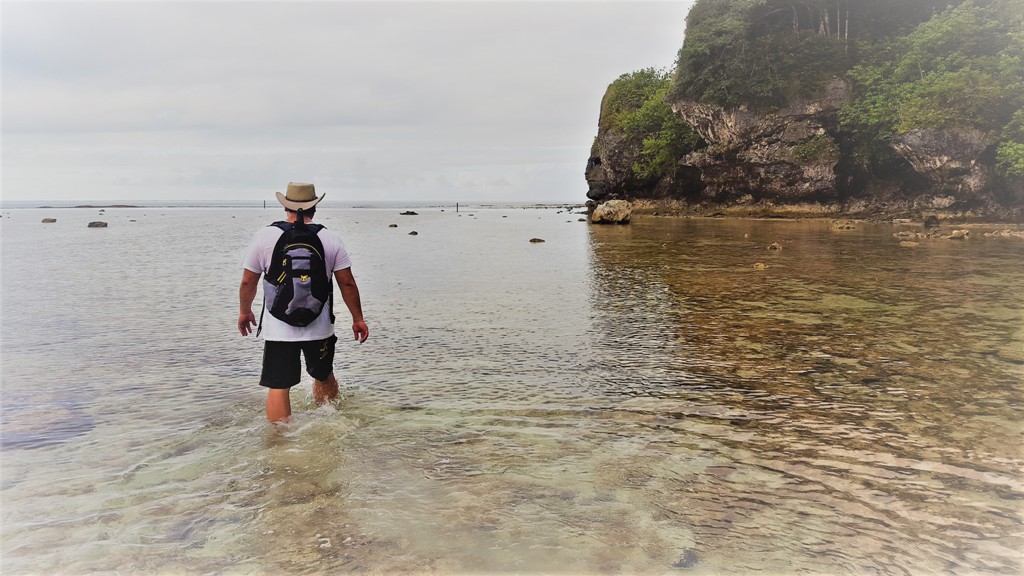 So a year later, here I sit on a cloudy, blustery day in lovely New Hampshire. Time for sun-soaked travel flashback!

If you’re anything like us, Guam is a bit of a vague notion. You’ve heard of it, but it’s kind of like Tonga: It’s one of those places you realize exist, but that’s about the extent of your knowledge … until you have a personal interaction with the place.

Long story short, Guam is a tiny island in the North Pacific–east of the Philippines and south of Japan–population: just under 200,000. The people there are Chamorro, originally immigrating (it is believed) from southeast Asia, then mixing with Spanish (Guam was colonized by Spain from 1668 to 1898), American and Asian cultures. 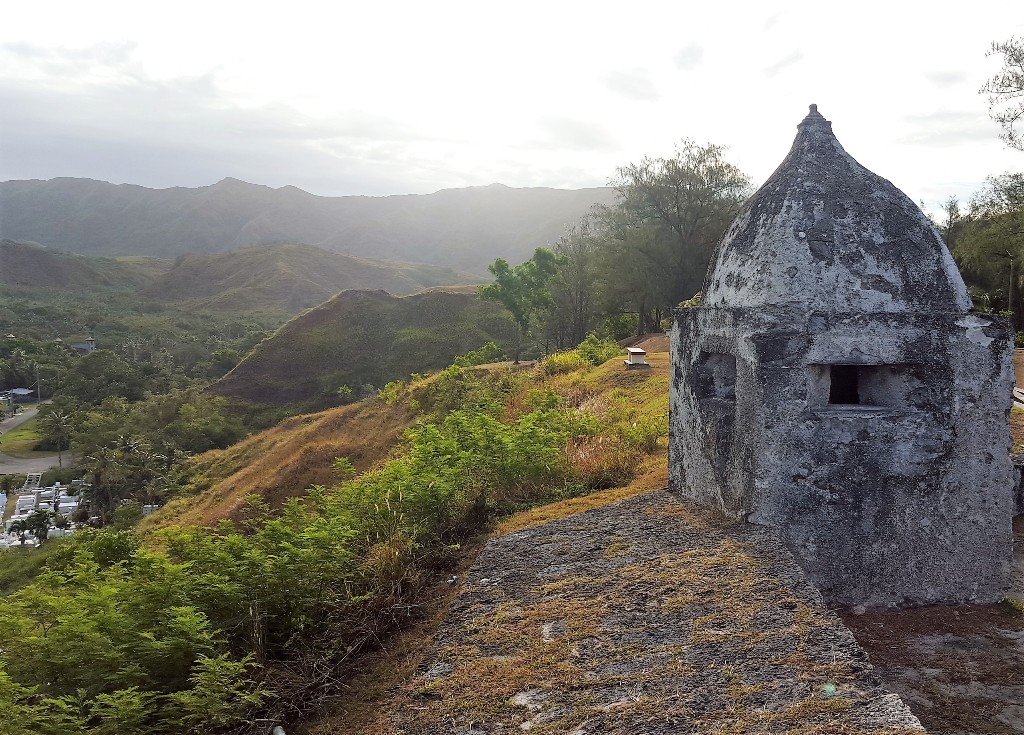 And though many authoritative sites would place Guam in Micronesia, Sam and I learned very quickly upon arrival that this is a hotly contested issue. Tread carefully.

Today, there is such a huge population of recent immigrants hailing from all over the world (largely from various spots in Micronesia and countries such as the Philippines, China, South Korea, Vietnam, Japan, etc.), that it is a true, modern melting pot. It’s also a U.S. territory–with a large military base presence–, which makes for some interesting cultural and political dynamics.  Here’s the Wikipedia link if you want a quick and dirty history of Guam. Also, Guam’s official government website, Guam.gov, provides lots of helpful information and links to other sites.

How to describe Guam today? We’ve heard many compare it to “Hawaii, fifty years ago,” and perhaps that’s a good explanation. But as I’ve never been to Hawaii (does a layover at the airport count?), I’m not much help there. I can say that Sam and I both saw many things similar to Tonga, which I suppose makes sense as it is geographically within the Oceanic group of islands, though Tonga is way over in the South Pacific.

Unlike Tonga, however, Guam has an extremely modern, polished tourist center called Tumon in the heart of downtown Tamuning.

This place is fancy.

Tumon is a creature all to itself. It’s kind of hard to describe. In an otherwise rather undeveloped island, this place is like a Disney Land for shoppers … who fancy a snorkel at the end of the day. Elaborately landscaped walkways curve around cute cafes, glitzy outlet malls and five-star hotels. Beach breezes, white sand and blue, jolly-rancher water peak in between, but in a way that makes the whole town feel like a giant resort. 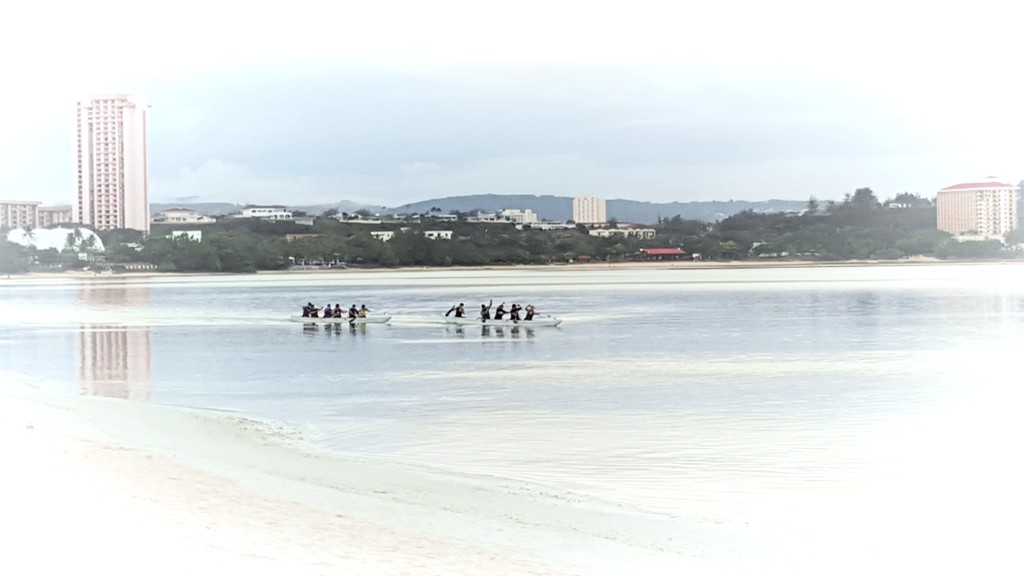 We were told that, years ago, this particular swath of Tamuning was a deserted area designated as a leper colony. Then, an enterprising family started buying up the land and building hotels. Restaurants, pedestrian connectivity and, of course, duty-free shopping centers followed.

And there are shoppers. So many shoppers, mostly from China and Japan.

But if activities are your thing, then Tumon is your HQ for tours and tourist facilities. Snorkeling is right out your hotel door, and scenic places like Two Lovers’ Point are just down the road. Hotels and tourist kiosks in Tumon help with other arrangements, or you can rent a car (also in the Tumon area) and just take an DIY island tour like us! 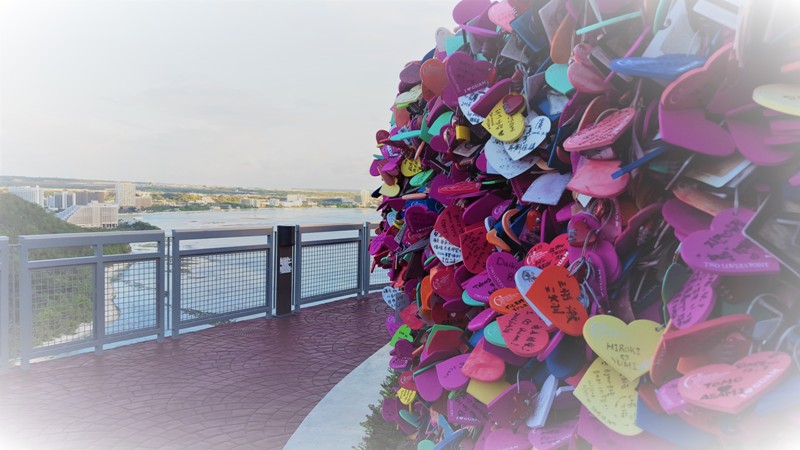 As for the food? Oh, how can I count the ways? Sushi to die for. Italian, Filipino, Vietnamese … all authentically prepared by chefs hailing from those regions. Of course, plenty of good ol’ fashion McDonalds and a smattering of other American chain eateries. Chamorro food and fresh-caught seafood? Oh my goodness, yes! I think we both gained a few pounds during our week-long visit. And the best part of the food scene in Tamuning, for us at least, was that there is truly a selection for anyone. While we were wined and dined at some super fancy (and delicious) restaurants, I think our favorite meals were those we had on our own time at the mom-and-pop restaurants serving up authentic Filipino, Vietnamese and Chamorro dishes at much more affordable prices than the hotels and boutique cafes.

Which leads me to another discovery about Guam…

Electricity is through the roof. Housing, for those who do not already own land, is pretty pricey. This is largely due to the large military presence here, which provides generous housing allowances for its members and thus inflating the market. But if you’re coming from the “outside” like us, then, wow! A decent condo starts at around $2000 a month. I don’t think we found a potential house to purchase that was less than $300,000. And as for groceries? Milk was something like $8 or $9 a gallon! Not all groceries were so high; things like locally grown veggies were much more reasonable, but it was a bit of an eye-opener nonetheless. 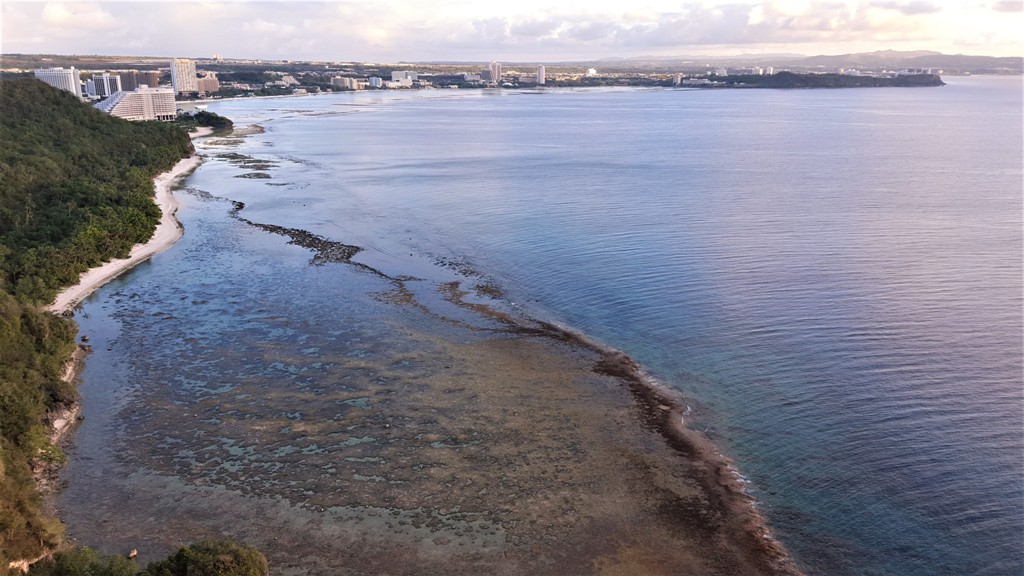 On the bright side, property taxes are relatively low. As for personal income tax, Guam substitutes the US Government’s tax laws for its own, so from what I understand, your personal income is more or less taxed once at whatever the federal rate would be, without a second tax one would normally pay to one’s state or territory. So that’s nice.

The Rest of Guam

Outside of Tamuning and the capital Hagatna just to the south, Guam is an interesting mix of housing developments, scattered commercial sites, ocean vistas, fishing harbors and tucked-away traditional villages. A main road loops around the whole island (all 210 square miles of it!) … well, mostly. The military takes up a large portion of the northern part of the island, so other than a few pot-holed drives to a couple of private resort beaches and a National Wildlife Refuge (that looked fantastic, but alas, we ran out of time to explore), the northern zone is off limits. 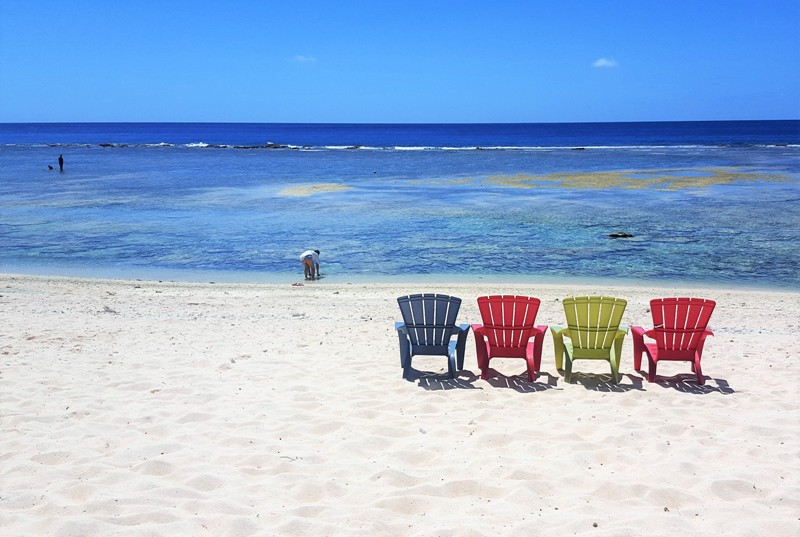 Generally speaking, the further south you go, the more rural and remote. The landscape changes from limestone cliffs and plateaus to rolling, sienna hills with bushy, lime-colored grass and sturdy ironwood trees. The scenery is fantastic. And if you do the island loop, you’ll see the difference between the flat, tranquil waters of the Philippine Sea on the west side to the blustery Pacific on the east.

Our Favorite Stops in the Southern Half of Guam: 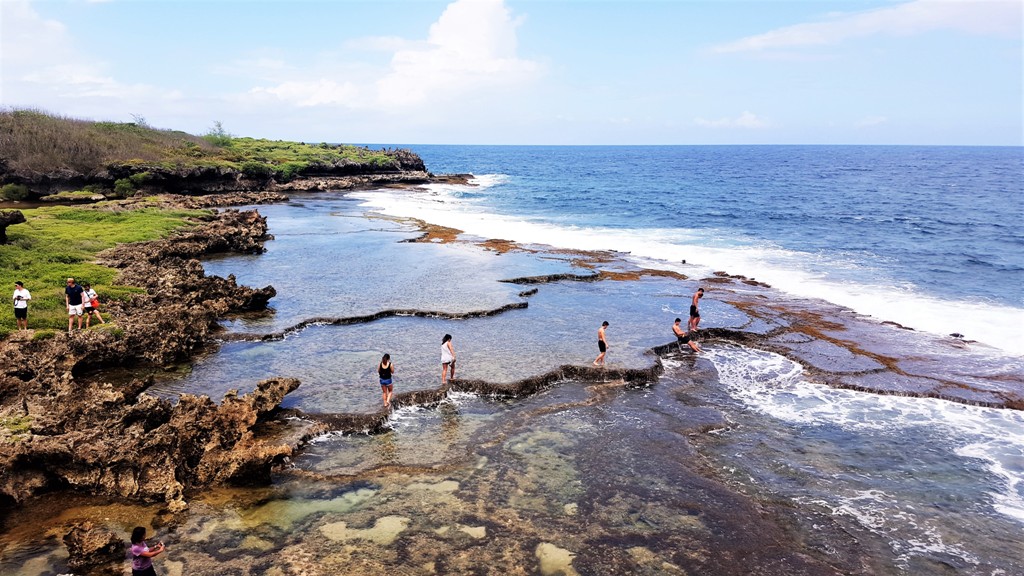 Well, it’s hard to scratch the surface, but considering this was a business trip and not a vacation, we had limited time to really delve into the culture and scenery. So take this with a grain of salt, if you will, but here is a non-exclusive list of things that struck us the most:

But the mountains of New Hampshire are stunning, too!

3 thoughts on “Guam Flashback: A year ago today …”