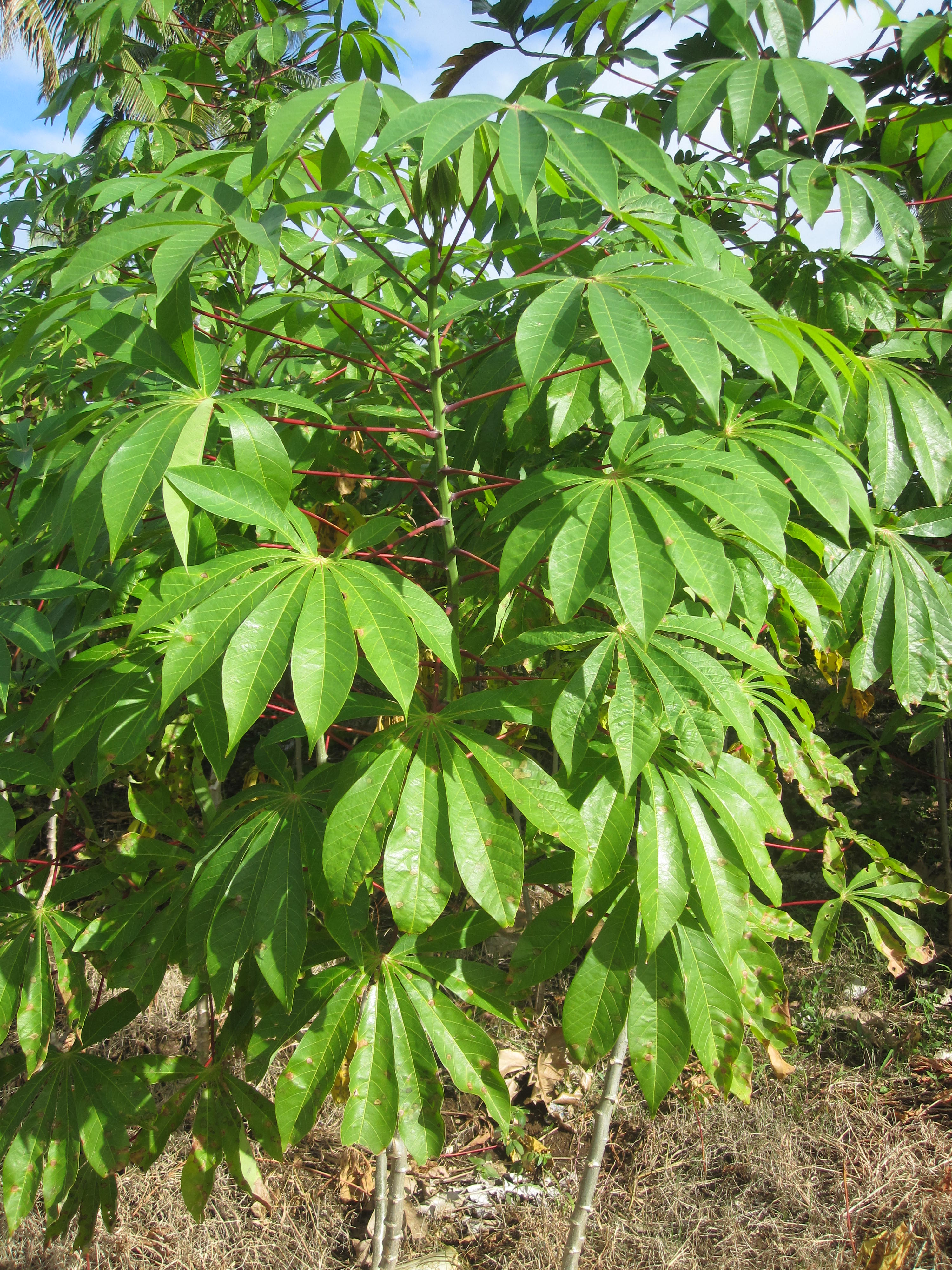 Tonga is sick with vegetation, almost anything grows in this soil, but I think the prevalent food group in these isles remains the various root crops that are consumed by the coconut-frond-braided basket.  Root crops are devoured here the way rice is eaten in Southeast Asia: at almost every meal, and if a root crop isn’t eaten, it’s probably because a loaf of bread is consumed in its place … especially if it is Sunday evening.

So here are the main root crops of Tonga:

1.  Tapioca (“Manioke” in Tongan and often referred to as “Cassava” as well.)

Manioke is seen growing in plantations all around the island of Tongatapu, like the picture below.  The root itself is the part that is eaten; its texture is hard and almost crisp when sliced — much harder and more dense than a potato.  And although it can be eaten similar to a potato, the meat must be cooked thoroughly to kill off the naturally occurring Linamarin, which is a cyanogenic glucoside and, when eaten raw, is converted to cyanide!

2.  Taro (“Talo” in Tongan, “Kalo” in Hawaii and often known as “Elephant Ears” when grown as an ornamental plant  in the states)

Talo is another perennial plant that serves as a staple of the Tongan diet.  Both the root (boiled or baked like a potato) and the leaves are eaten, indeed, the leaves (called “Lu” and used profusely in Umu baking as well as boiled and eaten similarly to spinach) are one of the few indigenous greens found in the kingdom.

Like Manioke, however, Talo contains a toxin called calcium oxalate which can cause numbing in the mouth, sores (in mouth and in the digestive system) and even kidney stones!  Also like Manioke, this toxin is killed off when cooked properly, but I’ve had several occasions when a delicious Lu stuffed with coconut cream and corned beef proved more than what I’d bargained for.  You’ll know it’s happened if your lips, tongue and palate feel tingly at first, then a little numb and sore.  It usually wears off within a few hours.

There are several types of Taro roots, including the aptly named “Giant Taro” whose tuber looks significantly different than the taro above.  These guys’ roots can be a little over four feet long and look more like a green tree trunk than a root.  The white insides of the Giant Taro stems can also be eaten but I haven’t tried these (to my knowledge!).

3.  Yams (“‘Ufi” in Tongan) are NOT what the average American would think of when using this nomenclature.

At least in the American South, “yams” are similar — if not completely interchangeable with — the sweet potato, but in the South Pacific, yams are one big daddy.    Often two or more feet in length, ‘Ufi is a versatile (and I might add, intimidating!) root crop that can be boiled, baked, fried, barbecued and/or otherwise prepared to one’s personal preference.  Unlike Manioke and Taro, most Ufi crops do not contain toxins, but I have heard there are some exceptions to this rule.  Although the enormous tubers can be seen at the market and along the roadside for sale in the ubiquitous braided baskets, I haven’t seen the ‘Ufi plant itself in pre-harvest form.  If I find one before I leave, I’ll add it here.

4.  Sweet Potato (“Kumala” in Tongan and “Kumara” in other parts) are found here in mostly two forms.

There is the Hawaiian Kumala — my personal favorite — which is creamy white on the outside and a shocking, vibrant purple on the inside.

And then there is the Palu Kumala, which is red-ish on the outside and creamy white/yellow on the inside.  I’ve been told that the latter are similar to sweet potatoes in the states, but the Kumala Hawaii is unlike anything I’ve ever seen or tasted before.

Super sweet and downright beautiful to look at, Kumala Hawaii can be cooked in any way one would normally cook or use a sweet potato, the only difference being that Kumala Hawaii is, in my humble opinion, better.  The color is beautiful: ever had purple mashed potatoes?  It’s pretty cool.  We’ve even made Sweet Kumala pie a few times over Christmas.  Delicious!

Breadfruit really isn’t a root crop at all, but it is cooked, eaten and generally used as one as soon as these peculiar fruits come in season.  I’ve seen Mei served mostly thin-sliced and then either fried into a type of chip or baked.  Either way, I don’t think I’ll ever get over these cool plants.

The breadfruit tree is one of the prettiest trees I’ve ever seen — almost magical looking ,really.  No wonder the British were so eager to bring these saplings to their empire back in the day.  In fact, it was this very tree that brought Captain William Bligh to the Pacific in the late 1700’s, just prior to the infamous mutiny that occurred off Tongan shores.

6 thoughts on “Roots Crops of Tonga”