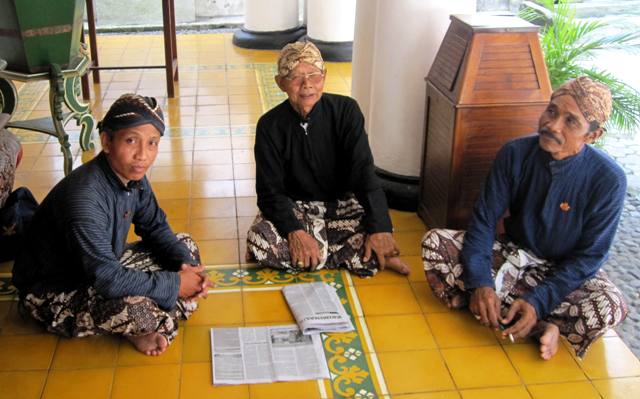 Even though I learned [basic] conversational Bahasa as a girl growing up in Indonesia, as an adult who has spent years and years away, I constantly find myself spouting awkward Bahasa blunders when attempting to revive my Bahasa skills.

The other day, a friend and I finished a group walk (a/k/a “Hash“) where, at the end-point, most of the hash members were enjoying delicious Lontong and Kari (the former, compressed rice steamed in a banana leaf so that, when unpeeled, the rice retains the shape and has a mild gelatinous texture; the latter, curry sauce with lemongrass).

Naturally, we decided we’d like to join in that endeavor, so we grabbed a bowl and plopped down next to a middle aged Indonesian man sporting a festive green hat (similar in style to the ones featured here).

Since I was sitting closest to the man and had never met him before, I thought I should say something in order to be genial. The problem was, the man (who, like many Indonesians, was very polite and reserved) seemed to be taking pains not to look at me or my friend. Solution? Well, that hat of his was pretty cool, so I thought I’d start with that.

I cast the man a side-wise glance, grinned and said in my best Bahasa Indonesia,  “I like your hat!”

The man, in return, sat perfectly still for a second or two while staring straight ahead. After another moment, a slight smile tugged at his mouth and then he said, barely looking my way, “Thank you.”

“No,” he said, and now that amused smirk grew bigger, “from Bali.”

Another moment of silence passed until he said, “You speak Bahasa well.”

I thanked him, protested that I did not, but added that I was trying to advance myself. And from there (and with the help of my friend who actually does speak decent Bahasa), we fell into a scintillating conversation regarding various cities in Indonesia, local delicacies and the virtues of the stinkiest fruit on earth … a/k/a “Durian.” After our chat and snack of Lontong, my friend and I bid the gentlemen adieu and returned to our respective homes for the evening.

When I saw Sam later on, I relayed the story of my Bahasa exchange and wondered out loud why my new hash friend was so amused when I complimented his head gear. But it wasn’t until I was lying in bed that night and thinking the conversation over that it hit me that … I’d gotten the word order wrong!

Because in Bahasa, you typically put your adjectives and possessives after the noun. For example, in English, we’d say “the brown dog” or “his house,” but in Bahasa, it would be “dog brown” or “house his.” Interesting stuff, I know, but this is where it really becomes important to get these things right:

Because instead of saying, “I like your hat” (Saya suka topi anda), I’d actually saddled up to an extremely polite man who was minding his own business, grinned wide and announced, “I like you, hat.” (Saya suka anda topi).

I will never know if that man thought I was a schizophrenic hash-ette who’d developed an undeniable attraction to green hats, or if he merely assumed I was attempting to cover up my forward ways by pretending my initial come-on was really directed to his topi. If I ever see him again, I don’t think I’ll have the courage to attempt explaining my Bahasa blunders, either … probably because I’d bungle it up even more.

Either way, I finally appreciate those mind-numbingly boring elementary school lessons on diagramming sentences! Poor Mr. Valley would be vindicated, if only he knew.

One thought on “Bahasa Blunders … and how to inadvertently hit on polite gentlemen.”