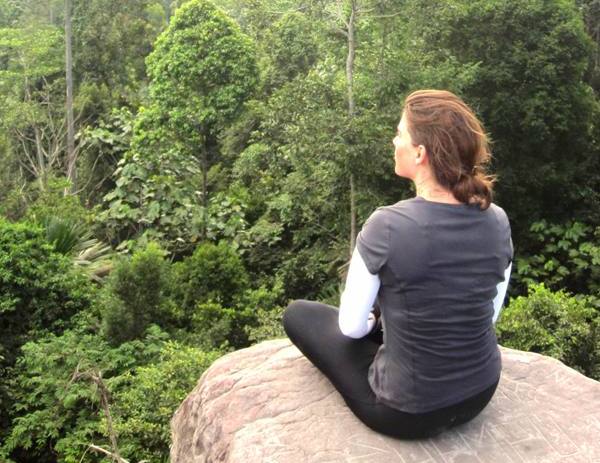 Bukit Dinding (Wall Hill) is a stunning backbone of boulders arching above East Kalimantan’s rain forest, about an hour and twenty minute’s drive from downtown Balikpapan. Pak Yayan has been telling us about this place for months, and since Sam had a weekend off to go further from camp, we said, “Let’s do it!”

Now, the title of this post is “Hiking Bukit Dinging” for a very good reason, and that reason is this: even though our trip to Wall Hill was intended as a cycling trip, due to the many steep, rutty inclines encountered en route to the place, we mostly just pushed our bikes. For those of you like Balikpapan’s famous Mud Hogs cycling group, you’d eat this place up, but since Sam and I are wimps, it more or less ate us. So with that introduction, here’s the journey:

The Road to Bukit Dinding 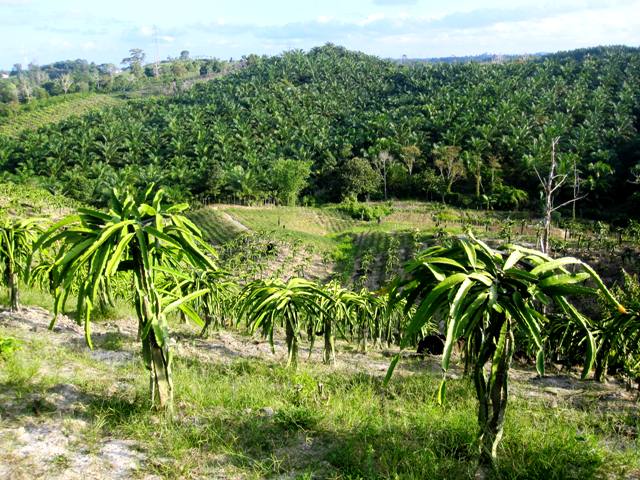 The road to Bukit Dinding starts on the left side of Kilometer 45 off Samarinda Road, if you are driving from Balikpapan to Samarinda. From there, a paved path snakes between kampungs and dissolves into a rut-and-rock-filled dirt road before you know it. 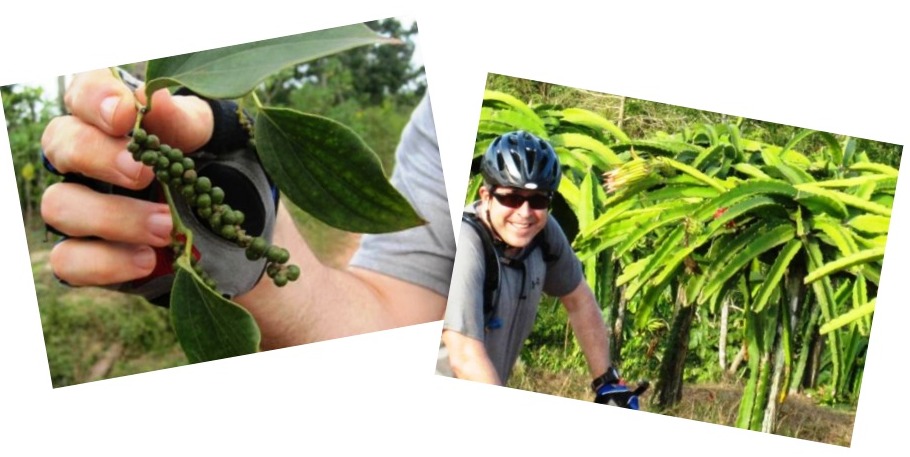 The lighting was amazing on the return leg when, at around five o’clock, the sun spilled golden light over the whole area and I thought that if I just had a little blanket, some apples, cheese and a bottle of wine, I’d propose a picnic … which might have something to do with why I must push my bike up hills while super-fit-cyclists who don’t obsess over wine and cheese actually ride up them.

But wine with cheese is delicious. 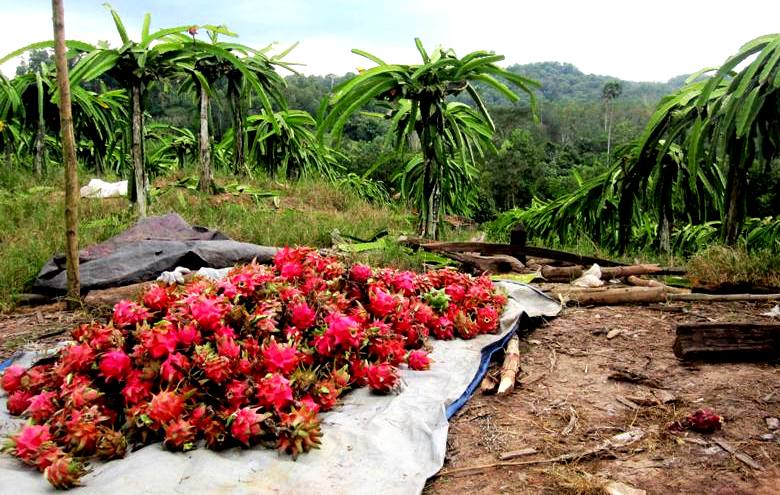 Anyway, from Kilometer 45 to the little rest-stop area just below Bukit Dinging, the journey is only about two and a half miles (one way). That doesn’t sound like much, but you work for those two-and-a-half miles, trust me.

Along the way, little warungs sell drinks for the travel weary … and some may or may not stop to collect an entrance fee. We were stopped at one and charged Rupiah 5,000 a person to proceed, so be sure to bring some small change.

Just before Bukit Dinding, a small, dirt parking lot hosts the few bicycles and/or motorbikes who braved the trip (most people park at the warung where money is collected and then walk the rest of the rugged trail). Makeshift tarp-tents pop with blue color between scrubby undergrowth and trees as the sight is a popular weekend camping spot for locals who stay to watch the sunset and then awake to the sunrise.

Beyond the parking area, a dirt path leads straight up, toward the backbone of rocks that is Bukit Dinding. 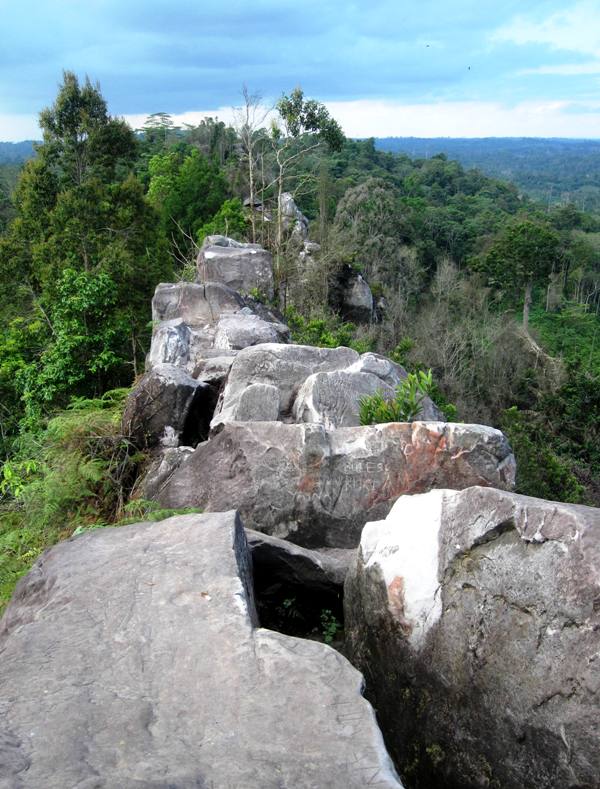 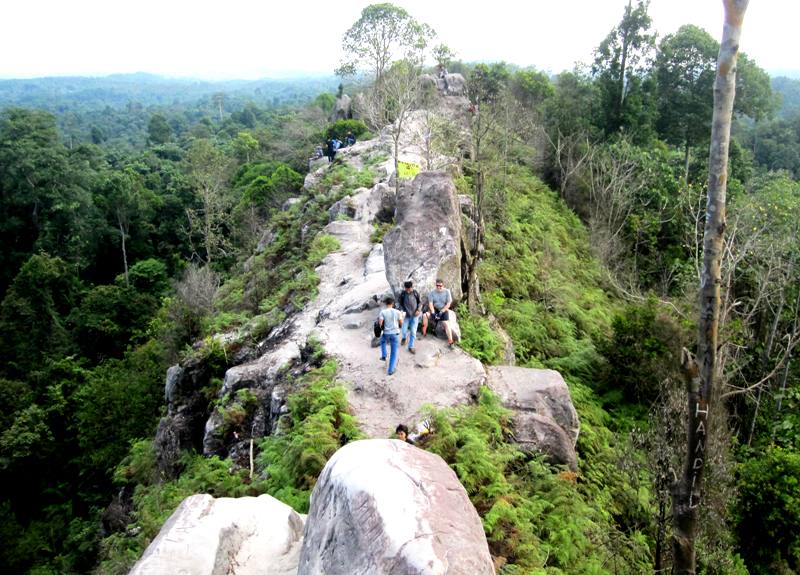 Once at the top, a footpath traces along boulders where photo-opportunities are abundant, as the plethora of hikers posing for pictures evidenced. This place is so popular for pictures that some enterprising person even stashed a comb and hair cream at the top of one giant rock, just in case. 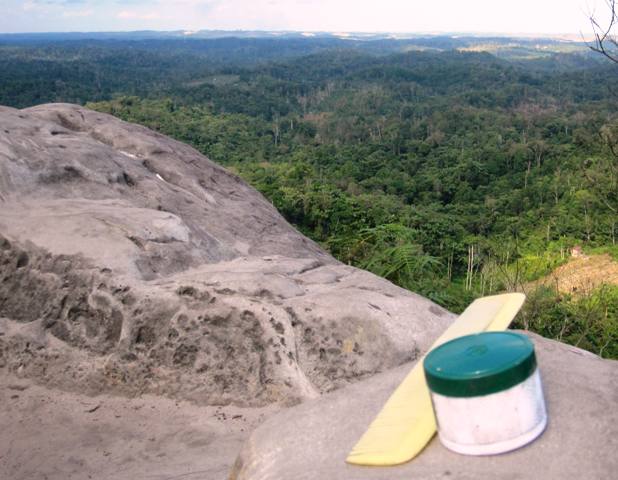 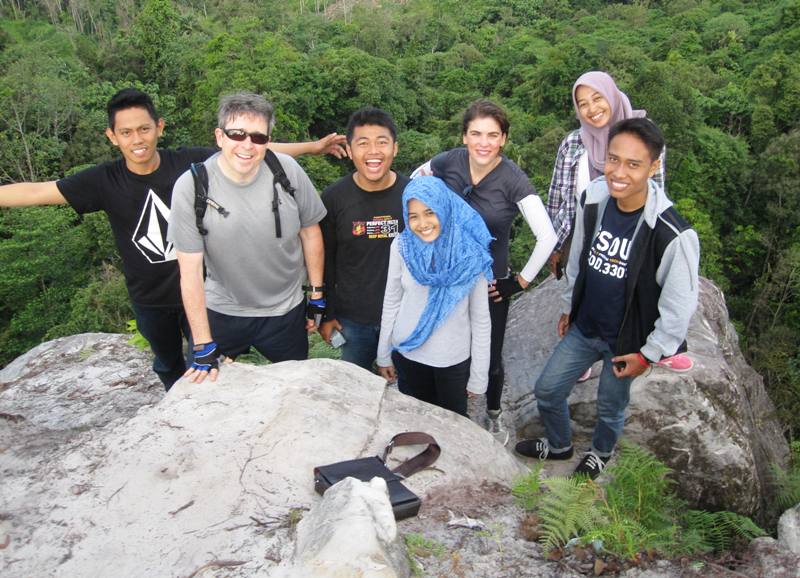 Sam was waylaid by a group of hikers who kept taking their pictures with him, so Pak Yayan and I continued along the backbone-walkway. Some of it is quite steep — so much so that a rope has been installed at especially treacherous areas. I used it because I’m lily-livered, but Pak Yayan practically leapt from rock to rock without any rope at all — this in his clip-in bike shoes! 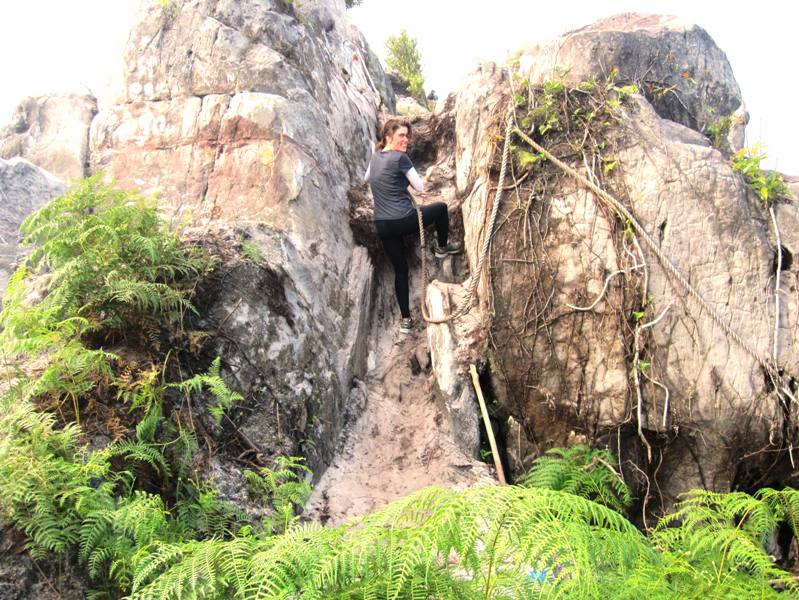 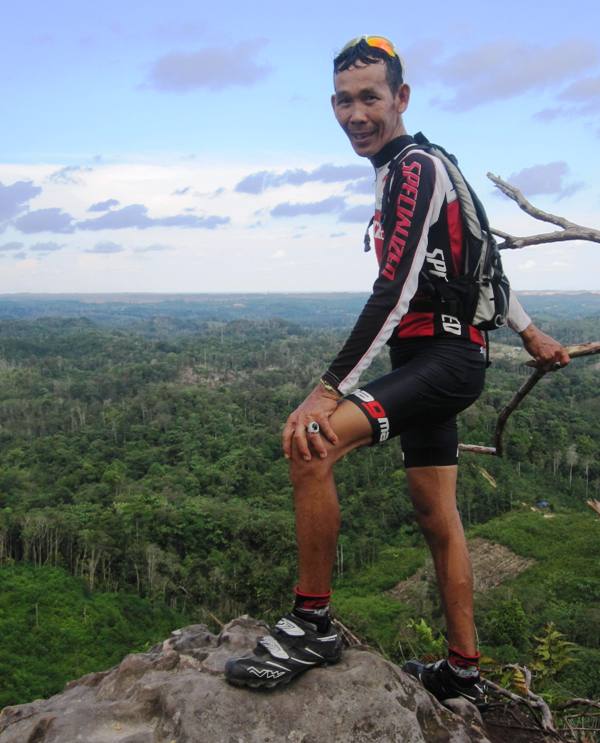 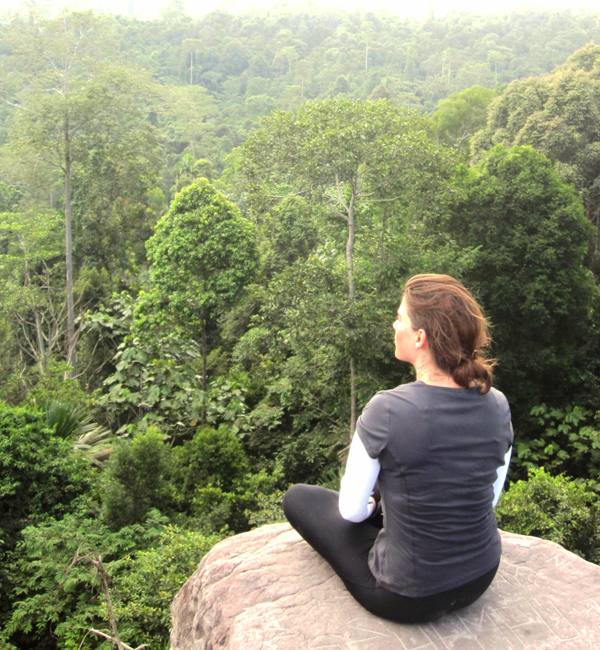 We wish we could have stayed for the sunset as it must be amazing, but work regulations stipulate we must be within city limits by six p.m., so we turned around, and began the ride back. 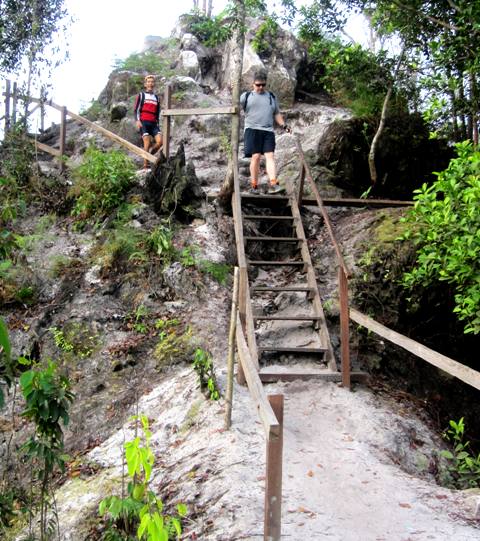 The return is much easier as it is mostly downhill, and we only needed to get off our bikes when the steep declines were so rut-filled we thought it prudent to be on the safe side. 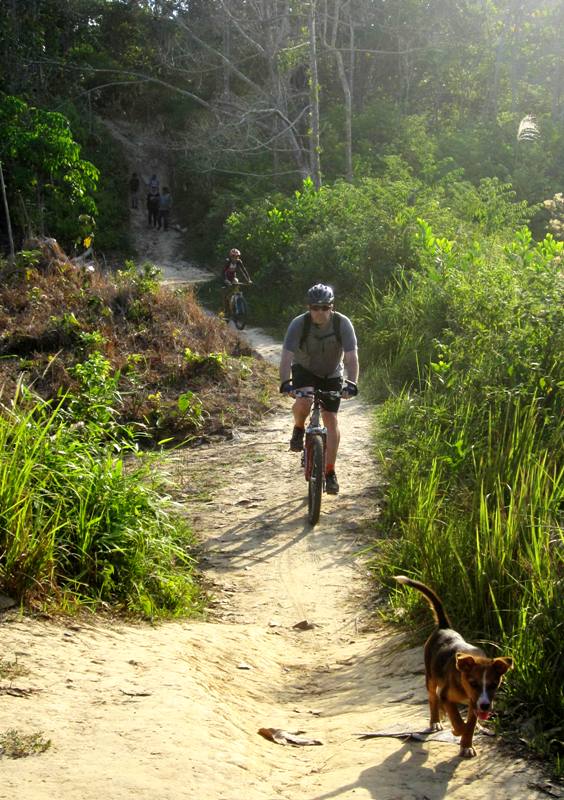 Beyond the easier cycling and super-cute puppies that followed us, the lighting — and the friendly people we encountered along the way — made our return leg lots of fun. This woman, for instance, greeted us on her way home from bathing in a little pond below the dragon fruit gardens. She holds her washing in the tub on her head. 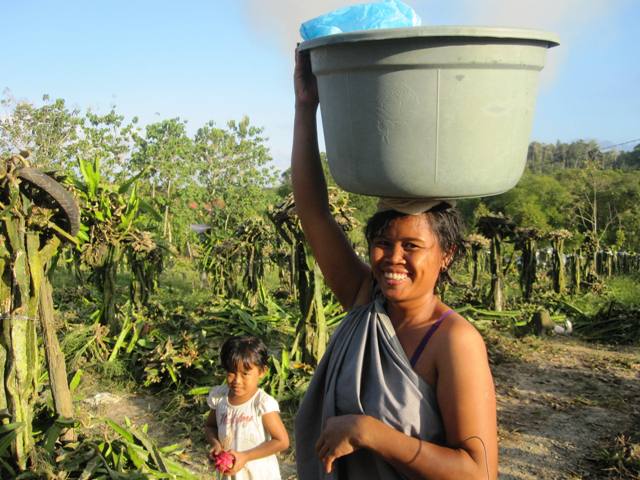 So that’s a wrap of our hiking/cycling trip to Bukit Dinding. And after all of that, we thought we couldn’t possibly wind up the day without buying some of that delicious dragon fruit, so we stopped at a stall along the roadside and picked up about four and a half pounds worth (two kilos) … all for about eighty cents USD total! I tried to pay the lady selling them a bit more, but she just shook her head and said the fruit was too small. And then, she started adding more fruit to my bag in addition to the two kilos I purchased! 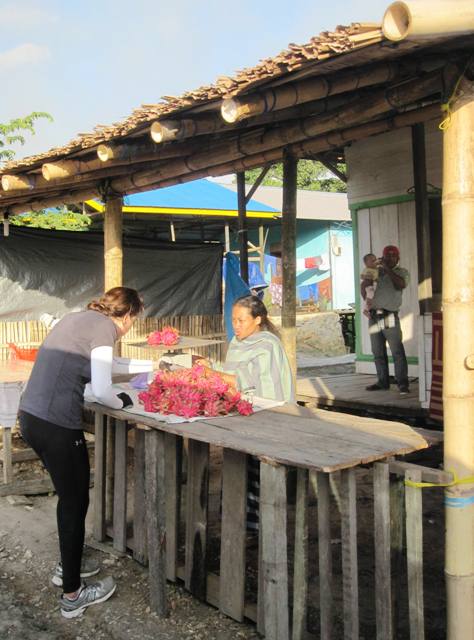