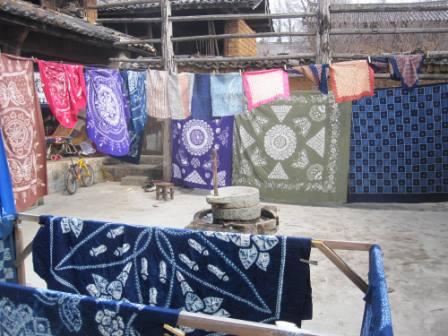 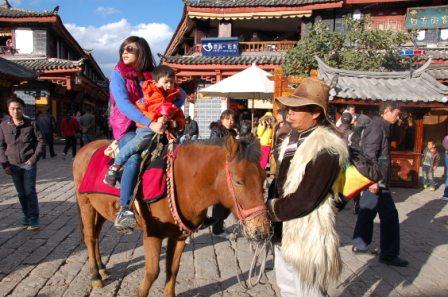 Last month, Sam and I visited the Yunnan Province in Southwest China. Our original plan was to fly into Lijiang, hike the Tiger Leaping Gorge, take the bus up to Shangri-La* before flying back out of Lijiang.

(*Shangri-La, you say? Funny you should ask: the town of Shangri-La (formerly known as Zhongdian) is named after the mysterious place in James Hilton’s novel, Lost Horizon !  But sadly, we read that a week ago, a fire blazed through the old town and destroyed a quarter of the wooden houses there.)

And then … weather happened. The first cold snap in 7 years, we were told. The first day in Lijiang, it didn’t snow, it really, really snowed.  Pretty, yes, and there were all these cool, funky little snowmen everywhere that I really enjoyed as well.  That’s the silver lining.  Snowmen always are.

However, the roads to Tiger Leaping Gorge and Shangri-La were closed for the next few days.  Another fun fact we discovered?  There’s no public heating in southern China, even in the freaking Himalayas!

So we spent a couple frozen days in and around Lijiang before taking the train down to Dali (awesome, by the way — but that is for another post).

Okay, so on to Lijiang.  The reason why we chose to come here in the first place, other than its proximity to the amazingly-spectacular-world-class-hiking-nirvana that is Tiger Leaping Gorge (*stifled sob*) was because it is frequently described as a quaint, cobble-stoned, canal town nestled in the foot of the Himalayas where China’s ethnic minorities such as the Naxi people still live and work.  Sounds nice, right?

It’s also described as “touristy” but we thought, Hey!  We’re living in a rather un-quaint, un-mountainous, un-cobble-stoned city so “touristy” sounds just great!  And here’s a little tip we discovered upon arriving in Lijiang:

When the word “touristy” is used for destinations in China, it is not normally meant in the same way one might think.  Yes, there are tourist shops and cafes and guides galore, but what “touristy” really means is actually code for hordes of big-city, east-coast, domestic tourists who literally flood the streets — all of that is well and good but here comes the kicker — who generally have no qualms in refusing to acknowledge the existence of fellow human beings who may wish to share the sidewalk.  I have never before known what it is truly like to be invisible until that trip to Lijiang.  And you know what?  Being invisible sucks.

The countryside is stunning — mountains all around, clean air, and when the sun is out, the landscape and weather reminded me a lot of Colorado … only greener. 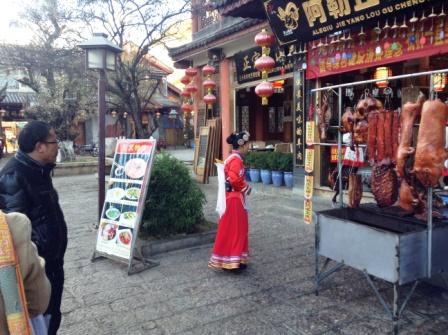 As for the town of Lijiang, it really is amazingly beautiful, even if all the former Naxi homes are now more or less hotels, shops and restaurants.  And for the most part, the shops sell the same things from one quaint wooden house to the next, with a curious propensity to offer colorful “tribal art” that looks like something from a Disney movie about Inca warriors or something.

Oh, also drums.  They love the little bongo drums.  Every other shop featured a cute girl thumping on them to the SAME song played over and over throughout the entire town. Seriously.  I do not exaggerate.

But I do digress. 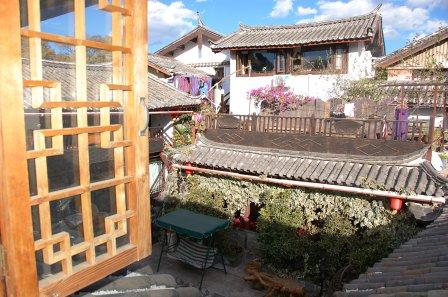 Where to stay:  There are tons and tons of historical Naxi homes converted into guesthouses to choose from smack dab in Lijiang’s Old Town (also called “Dayan”).  We stayed at a mid-range guesthouse called Moon Inn, which was reasonably priced (we paid around 200 RMB a night for a room with rooftop views) with clean rooms and a “western” bathroom with a hot water shower.  Eric, the manager, speaks good English and helped us arrange airport pickup and drop off.  Contact info: +86-13578385646 or +86-13769039538, ericlijiang (at sign) 163 (dot) com 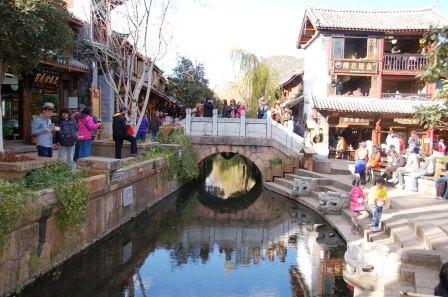 Check out the town public pools, such as the White Horse Dragon Pool (see photo gallery at end of post).  These are a sequence of three pools made from a spring.  The first pool is for drinking, the second to wash food and the third to bathe and wash clothes.  They are still used today! 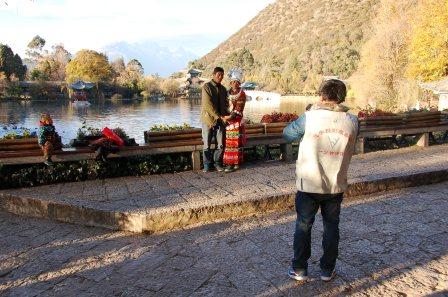 Black Dragon Pool, a pretty park with tiered ponds leading to the foot of Jade Dragon Snow Mountain (which is a mountain on one side of the Tiger Leaping Gorge trek).  Also, some fun people-watching, where folks cram into every picturesque angle for a snapshot of one of China’s most famous landscapes.  Up the hill from the main pool there is a strange “Dongha Cultural Institute” (strange, because it is a rather elaborate construction that had an abandoned air about it) that is supposed to be a learning center about Dongba-ism, which is (I think) a blend of Tibetan Lamaism, Daoism and shamanism .  The priests at the center are said to be able speak to the spirit world while translating  ancient Naxi pictographs (according to the Lonely Planet, this is the only hieroglyphic language still in use in the world today!).  The center was closed when we were there however. 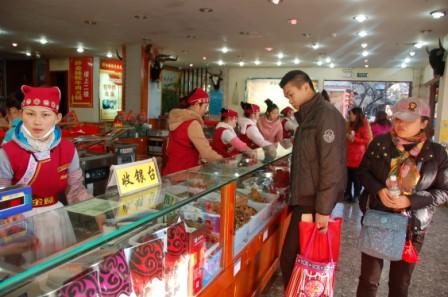 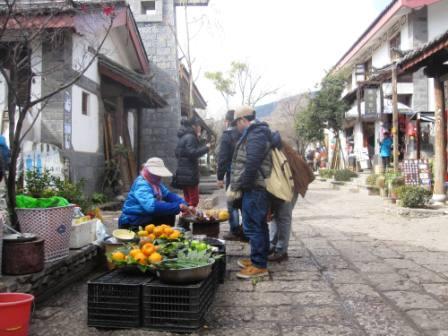 Like Lijiang, most shops and restaurants have little authenticity to them, although we did eat dinner at “Naxi Restaurant” in old town and it was excellent — delicious roasted fish and vegetable clay pot at super cheap prices.   The north side of Old Town Shuhe is especially worth checking out — it leads to pretty garden plots and pagodas with old-timey shops lining the rambling cobblestone walkways on the other side of the canal.

Also worth checking out?  The awesomely entertaining engagement/wedding photographs prominently displayed about town.  You just kind of have to see them for yourself to understand. 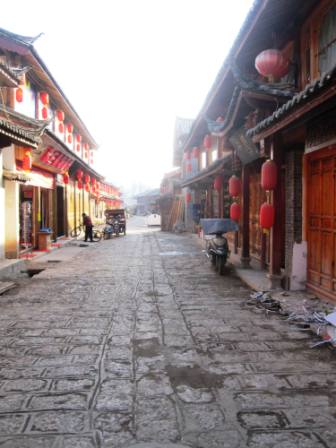 Shuhe is a few kilometers from Lijiang Old town.  We actually stayed at Bruce Chalet just outside Shuhe for a night after our trip to Tiger Leaping Gorge got cancelled due to weather.  Bruce Chalet is very peaceful and tucked away from the bustle of the old town.  Be warned however: if you go in the winter, the rooms get positively frigid … and there is no — literally NO — heat except for a heating pad they put over the mattress and a nice, comfy blanket. (That said, the winters are usually not as chilly as they were this year, so perhaps one doesn’t normally have one’s breath freeze while sleeping…) Nicer people and better customer service could not be found on this planet, though. 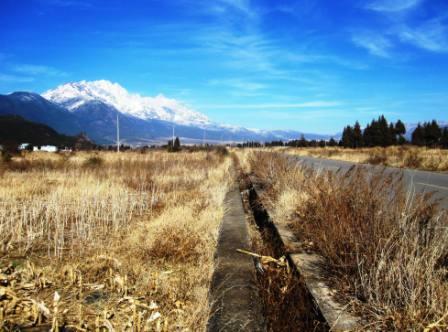 Rent a bike and ride up to Baisha Village.  This was probably our favorite thing we did while in the Lijiang area.  Baisha is about 2 kilometers north of Shuhe and was once the the seat of the Naxi kingdom before Kublai Khan decided otherwise.  We went there twice, walking the second time because it was our first opportunity since arriving in China to walk through fields with mountain views all around.  So pretty.

And the village is amazing — from the indigenous, bright blue clothing worn by the Naxi women to the sod houses, barns stuffed with corn and pretty batik and tie-dye craftwork.  Also?  Try the Naxi fried white cheese.  It is mild and soft — like ricotta — cut into cubes, fried and then sprinkled with sugar.  I added a pinch of salt to mine and it was delicious. 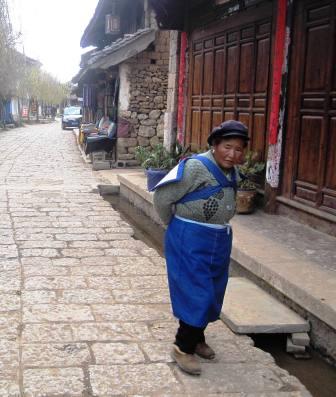 Getting back to Shuhe: If you are in Baisha Village and arrived via foot, you can catch the blue, number 6 from the main bus stop in Baisha back to Shuhe old town.  But be warned: the bus does not always stop where it is supposed to!

Bottom line: Lijiang and the surrounding area is gorgeous and visiting local villages where the Naxi people still live somewhat traditional lives was a refreshing change after spending over six months in a city of 13 or so million.  I’d say Lijiang is worth a visit, especially if you are interested in hiking the Tiger Leaping Gorge or visiting Shangri-La.  But if you are just after a historical town with mountain access as well as a chance to see the countryside, I’d go to Dali if it was a choice between the two. 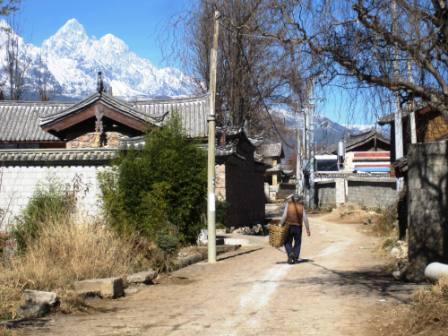 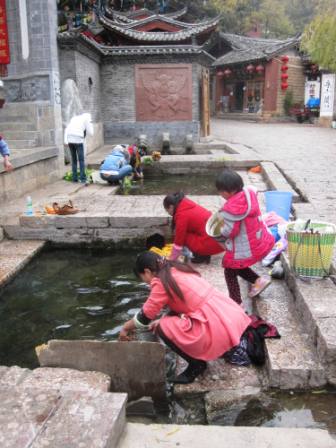 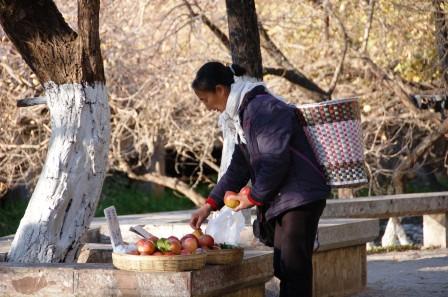 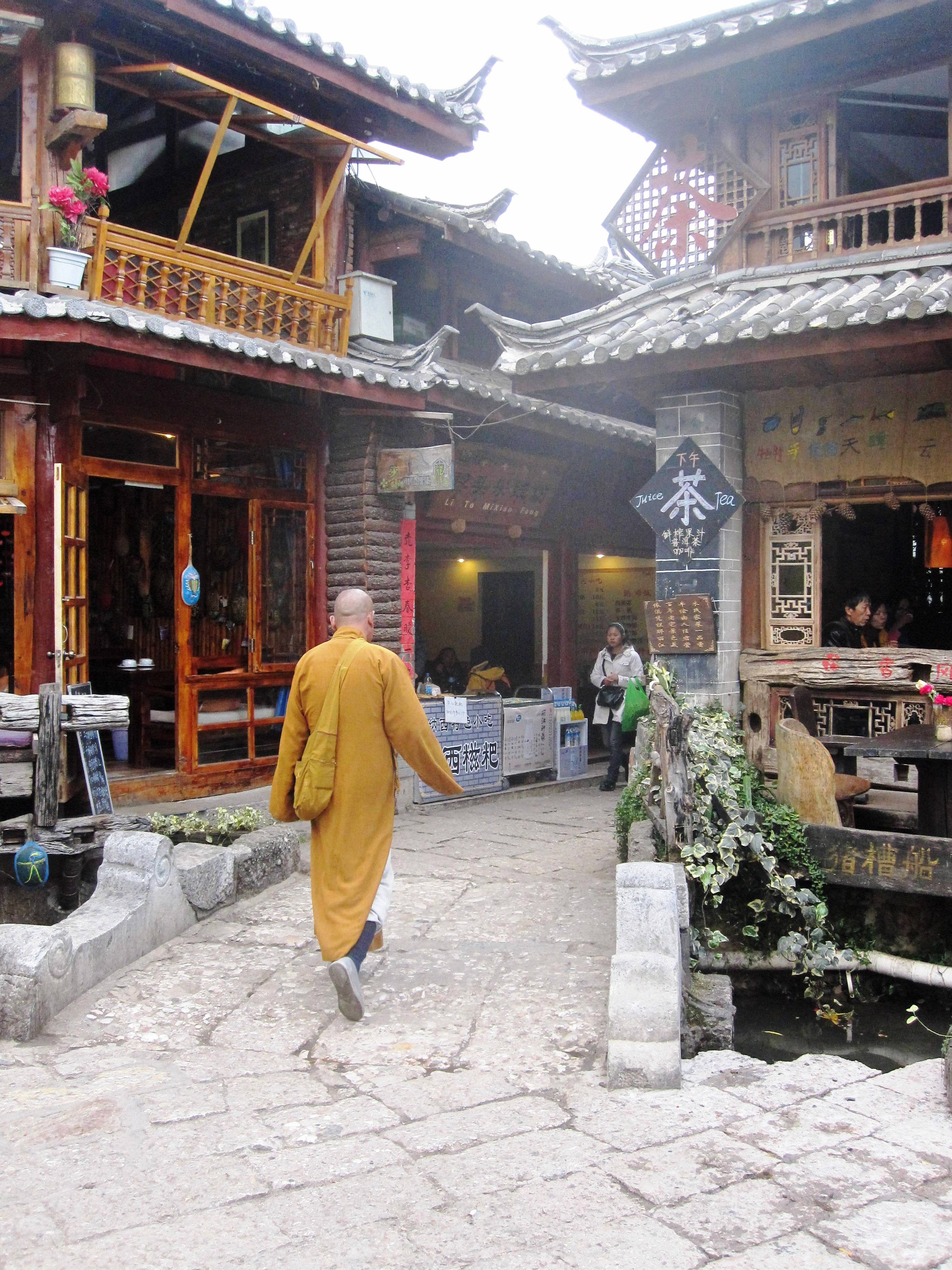