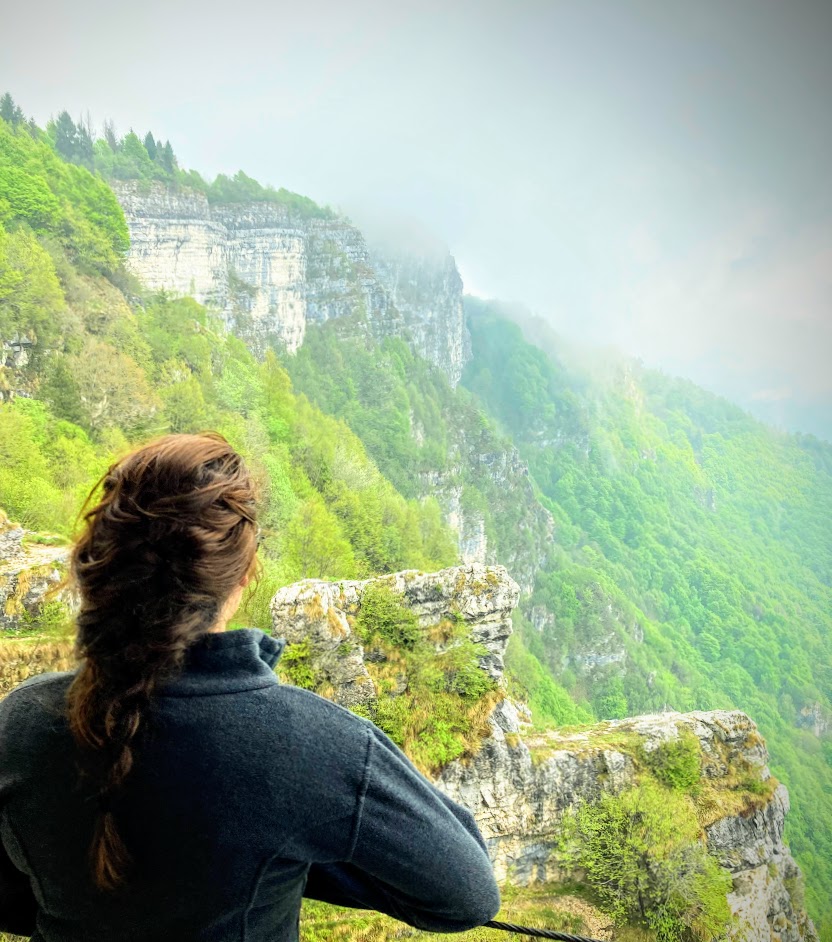 Just over one hundred years ago, in this beautiful place of misty mountains, verdant cliffs and a dragon’s-eye view of valleys and villages, the Grenadier Brigade fought one of Italy’s most significant WWI battles at Monte Cengio.

That happened in 1916, when 6,000 Sardinian soldiers (the Grenadier Brigade) arrived at the plateau of Monte Cengio, a mountainous area near Asiago, Italy on May 22. Their task? To defend Italy’s northern border against the invading Austrian troops. The brigade succeeded, but at a tremendous cost. Merely 14 days after arriving, only 1,300 soldiers made it out of Monte Cengio on June 4. The rest were dead, missing or severely wounded.

That fourteen-day journey for the Grenadier Brigade is now memorialized by the two-hour hike leading through tunnels and widened cliff sides.

It is difficult enough to imagine the terror and cacophony of war in such a gorgeous setting, but even harder to imagine what it must be like to leave one’s island home of Sardinia to defend a craggy, unfamiliar part of the country some 500 miles to the north. Harder still to comprehend that, in two weeks’ time from arriving in this place, only about one out of every six of your comrades remain alive.

As an American, I feel that WWI is a mysterious and rather vague affair. We didn’t participate to the extent we did in WWII. It was a war that happened in another place, largely to other people, and while it set the stage for WWII, it still seems hazy, less personal.

Living in Italy has helped change that. The vague and impersonal transforms to something vivid and courageous and terrifying. History swirls into real time. A hundred years doesn’t seem that long ago when you walk through passes like this one along La Granatieri route–which reminded me somewhat of the battle setting from the movie 300–, then reading the nearby sign explaining that it is called the Grenadier’s Leap:

Researching this, we discover that it is called Grenadier’s Leap because it was here, at this critical pass within the mountains, that the Grenadier Brigade ran out of ammunition while advancing against the Austrians. Instead of retreating or surrender, these men grabbed the Austrian soldiers and, one by one, jumped to their deaths.

The Grenadiers’ Route, or “La Granatiera” is one of hundreds of historic, stunning hikes in this area of Italy, but so far, this is my favorite hike I’ve ever done–be it in Italy or elsewhere. The signage is fantastic, the views incredible, the multiple tunnels are exciting, and the story of the Grenadiers Brigade weaves an experience that is so much more than a gorgeous hike in the mountains.

How to get to the La Granatiera hike at Monte Cengio

Monte Cengio is just under an hour north of Vicenza (Italy) and just south of the incredibly charming town of Asiago. We parked at the free parking area at Piazzale Principe del Piedmonte. There is a chapel/church there, picnic tables and good signage. We actually took the route backwards from the suggested direction, starting with the footpath leading off to the left (if you are standing in the parking area and facing the signage and recycling bins) with a wood post sign that indicates “Gallerie” (which translates to “Tunnels”). The footpath leads to a wider gravel stretch, and then shortly thereafter, you hit your first tunnel, “Galleria Cannoniera.” (Featured below)

IMPORTANT: There are exits within the Galleria Cannoniera from the various “windows” and even through a built-in metal ladder of sorts. BUT, it is confusing to find the Granatiera Route from these exits. The best way to stay on-track it to check out this tunnel, then turn around and exit the way you entered, following the dirt path that curves around to the right.

The La Granatiera Route: What to Expect

If you start the way we did at the Piazza Principe del Piedmonte and complete the loop without taking side trips, the hike is about 3.5 miles. If you take the side paths at the precipice of Monte Cengio (where the cross is), your hike can extend to 5.5 miles or longer.

Even taking the 3.5 loop, you will pass through varying landscape that will impress and entertain almost any age group: you’ll creep through tunnels, climb to a mountain-top bunker and trench, walk along ledges that float above valleys far, far below … and even, if you are lucky, chance upon rock climbers.

Informative signs along the way explain that most–if not all–of the tunnels were actually created after the Grenadier Brigade’s harrowing battle, beginning in 1917. Here and there, you can still spot the tubular hallows where dynamite sticks helped break apart the stone to create the tunnel system we see today.

Once you reach the summit of Monte Cengio (which is closer the start of hike if you go the other way) you will stand in the Sacred Area with the cross, memorializing the thousands of lives lost on this mountain. The view from here is, of course, incredible. You can also see the path taken to reach this peak.

In this area, you will also find signage showing the intended route (we went the opposite way) and multiple side trails.

I recommend at least taking the side trail to the observation point. The views are beautiful and there is a grassy spot that would be perfect for a picnic … if it were not for the pile of felled tree limbs obstructing the space when we visited.

Difficulty level: Most guides rate this hike as fairly easy. I know someone who recently brought their five-year-old, and they did the 3.5 mile loop without trouble. Even with lots of photo stops, our 5.5 mile hike took under 3 hours.

Observed dangers: The risk of slipping/falling is the most obvious danger, and if you have children, of course use appropriate precautions. Stretches of ledges spanning over deep ravines are a large part of this hike, and there are no barriers to keep children or pets from falling, should they wander to the edge. We didn’t encounter any creepy crawlies, but we’ve been told that there are venomous snakes in the mountains … yet another reason to arm yourself with good lighting!

I believe hiking opens up in late May and lasts through the fall. But the ideal time, I think, is when we went: at the end of May. Why? The weather is not too cold nor too hot, but mostly, it is because it was during this exact same time frame, from May 22 to June 4, 1916, that the Grenadiers so bravely defended northern Italy from Austrian invasion. As an American, doing this over Memorial Day weekend felt especially appropriate.

Restrooms: None. If you stop at the Rifuge Ai Granatieri for a drink on the way out/back (depending on your direction of travel), they have a nice restroom there.

The Rifuge Ai Granatieri is right off the La Granatieri loop. We stopped here for a couple beers and to refill my water canteen, and really enjoyed the friendly laid-back atmosphere. If you are at the parking area, there are two other restaurants/Rifugis you can walk to. If you are driving up to Piazzale Principe del Piedmonte parking from Vicenza, right before you take the EXTREMELY sharp left turn to go up the mountain, there is a great little family albergo/cafe where you can buy drinks and some basics. They told me that they specialize in Asiago sausage with polenta at dinner time, and this is on my list of things I am determined to experience.

Where to go from Monte Cengio:

Have you hiked La Granatieri at Monte Cengio? Or have you done any of the other routes, such as the hike to Fort Corbin?