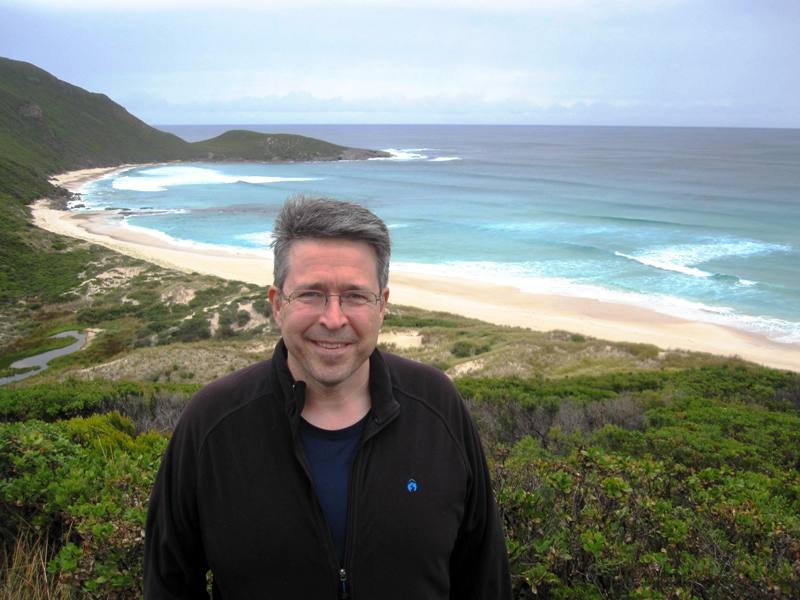 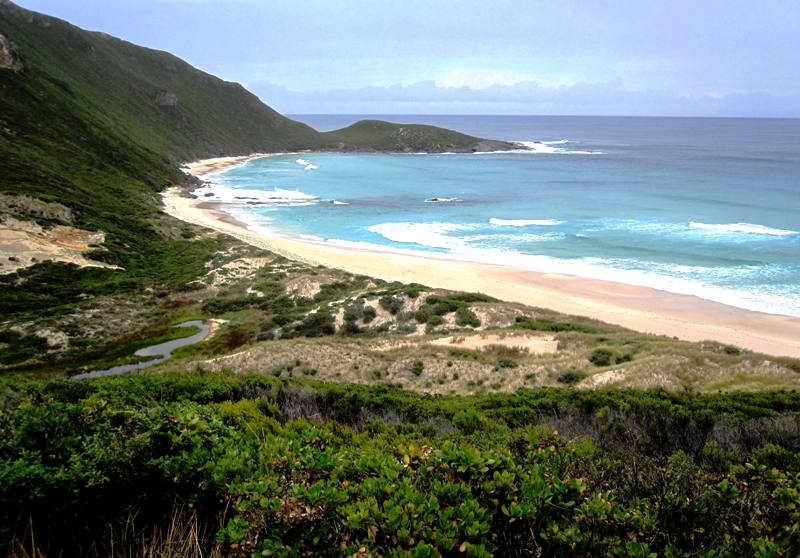 One of the reasons Sam accepted his current job offer to work for a while in Indonesia, was the amazing destinations we might not otherwise be able to visit. So, for our mid-year time off in late May, we decided upon a road trip through Western Australia. The problem was, Western Australia is an enormous (and expensive!) place — far too enormous to cover in a seven day R&R block — and most blogs and travel sites I came across warned of long stretches between towns and the perils of fitting in too much in too short of a time. “You don’t want to spend all your time in the car!” most people said.

And while that wisdom is definitely true, what’s also true is that, for better or for worse, we’re both Americans. And one thing I’ve noticed about a lot of Americans is that we want to fit in as much as we can when visiting a new place.

Sam and I have a few theories on why this is, one of them being that, as a general rule, Americans have significantly less vacation time than, say, Western European counterparts, so we want to see as much as we can during our precious, precious vacay, not to mention the extra length of time (and expense) it takes to reach many destinations outside of our continent. For example, friends who live in the Netherlands or Germany will face 14-plus hours to travel from their country to Jakarta, Indonesia, while it takes Sam and I twice that amount of time to travel from the US to Jakarta. But that is another matter for discussion!

The purpose of this post, and those following in this series, is to hopefully help readers who, like us, fancy a self-drive around Western Australia, but feel a bit daunted by the sheer vastness (and expense) of what to see and do in a week’s time frame.

So here’s how we did our Western Australia road trip in seven days with lots of stops along the way, fun activities fitted within, and all of this on a budget:

After a good bit of research, we narrowed our road trip down to the mid-to-southern portion of Western Australia. For a week-long trip, you kind of have to narrow down the region a little, and since many rental car companies won’t allow one to drive in the northern areas of Western Australia (check their policies before signing that agreement!), this helped with our decision making somewhat. Also, we were interested in seeing a bit of Perth, but didn’t want to spend much time there as the famed eucalypti forests and stunning coast found along the southern region, the renowned vineyard paradise of Margaret River, and the gorgeous photos of Pinnacles Desert made our We’ve-Got-One-Week-to-See-Western-Australia! ambitions focused and more organized.

The first leg of our itinerary went like this: Day One: Fly to Perth. Rent car. Drive from airport south to Walpole and spend night. Day Two: Drive east to Valley of Giants for the Tree Top Walk, then south to Conspicuous Cliffs, then west toward the logging town of Pemberton. Spend night. Day Three: either stay an extra night in Pemberton or begin journey toward Margaret River. We’ll cover days four through seven in subsequent posts, with our journey ending at the Perth airport.

A note to prospective visitors: Australia requires a tourist visa to be obtained prior to arrival for citizens of most countries (including the U.S.A.). The online process is easy, super-quick and inexpensive — we obtained our visa within a few minutes of submitting our application — but just make sure you do this before you leave for Australia! (UPDATE: The information in this paragraph was current when originally posted in 2015.  As of now (2020), you must obtain an “Electronic Travel Authorization” or ETA for short term stays in Australia.  Info about this and the online application can be found here.)

We rented our car via vroomvroomvroom and settled on the rental company of Red Spot — both for Red Spot’s affordability and also because it is located inside airport. We learned the hard way when visiting New Zealand several years ago that many budget car rental companies are not just not in the airport, but have offices significantly removed from the airport, and worse, some unscrupulous companies shut their doors after normal business hours, even if you’ve booked a rental for a late flight arrival! We didn’t have any problem with Red Spot, thank goodness, and with our trusty little economy car now secured, we began our journey south on Highway 1.

The highway drive, for the most part, wasn’t terribly scenic — we crossed vast desert plains that look similar to Texas or parts of California, I suppose, but as we neared the logging towns of southern Western Australia, the eucalyptus forests of Karri and Tingle trees changed the landscape entirely. 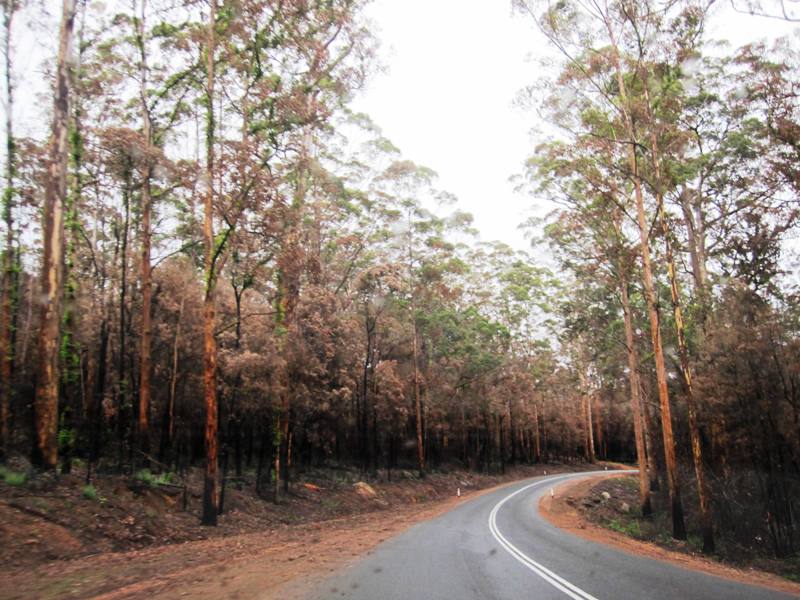 We learned that, due to the dry climate and the high oil-content of eucalypti, these trees spontaneously burst into flames at times. The trees then regenerate, thus self-regulating the forest density and undergrowth. It was a strange thing to see, actually: as we drove through forests, one one side the trees would be green while on the other, they were more of a post-burn ocher hue.

We arrived in Walpole just before dark and checked into our room at the Tree Top Walk Hotel … which would much more accurately be described as a motel. The room was quite large, clean and within easy walking distance of what consists of Walpole’s “town,” but as the town is teeny-tiny with very little choice in dining options, we had our supper at the motel restaurant. Portions were huge and hearty. 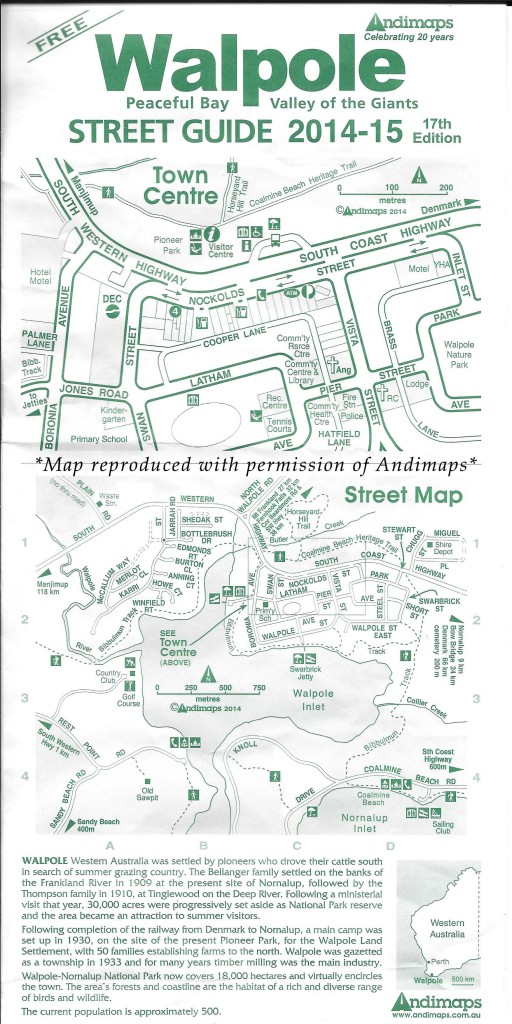 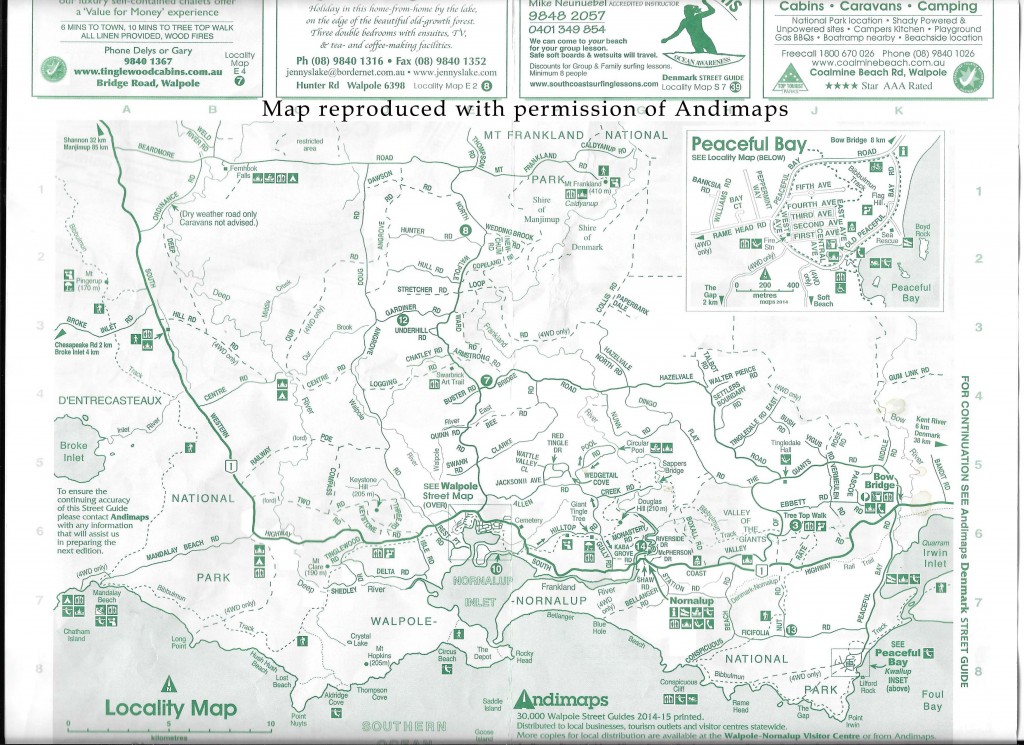 The next morning, we drove to the famed Valley of the Giants Tree Top Walk, about a twenty minute drive from Walpole. The super friendly Discovery Center charges $15.00 AUD per adult ($7.50 per child) for entrance to the Tree Top Walk. This thing is pretty cool: the walk is a slanting metal walkway that starts from the forest floor just behind the Discovery Center, then gradually rises to 40 meters (about 120 feet) above! Even walking in misty rain, the grated flooring and side rails provided secure footing, but the strangest sensation was the mild bouncing underfoot — almost like a lazy trampoline. 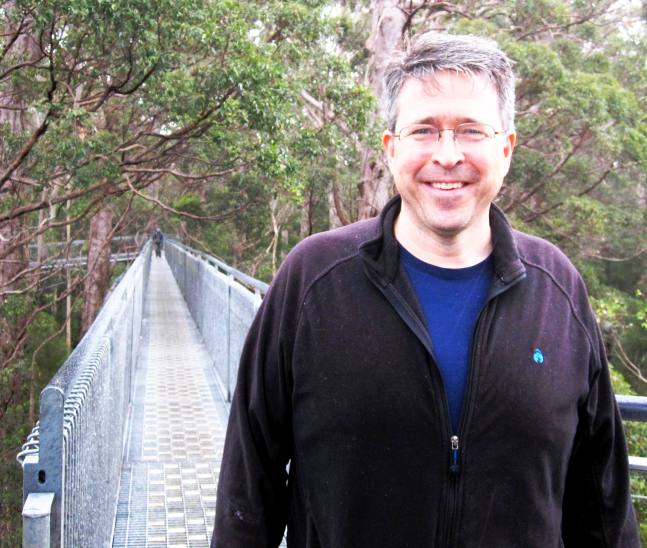 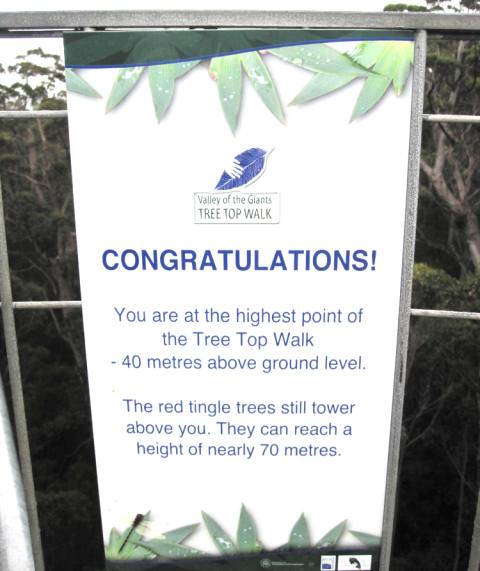 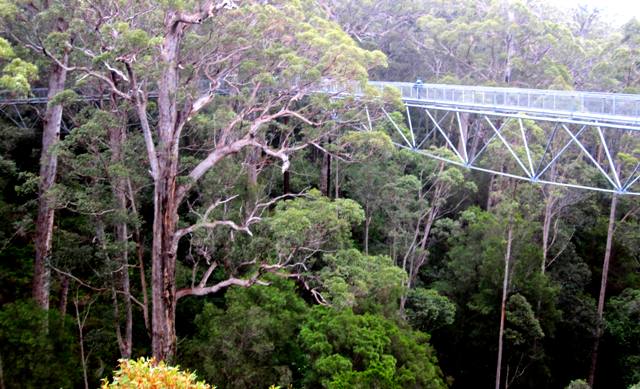 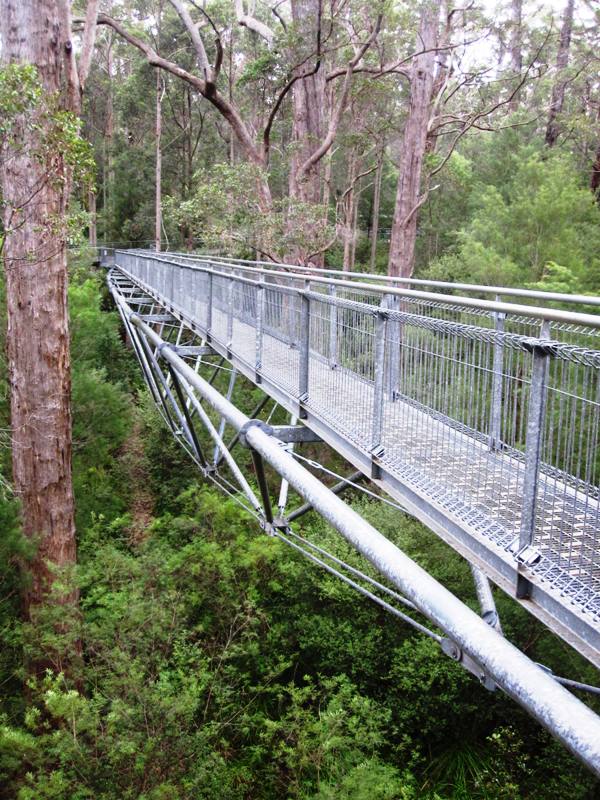 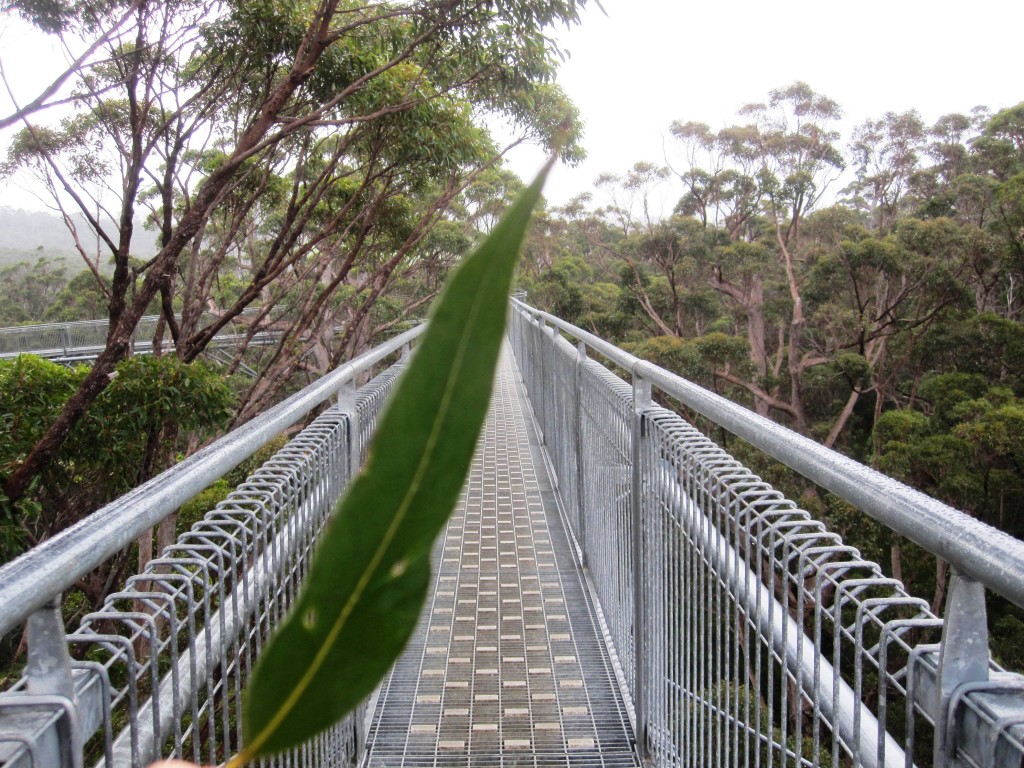 Here at the Tree Top Walk, various eucalyptus trees such as Tingles, Karri and Marri (the collective also referred to as “gum trees”) grow from 30 to 80 meters in height. The Red Tingle tree is especially interesting because its trunk bottom expands and splits — not unlike some of the giant redwoods — to compensate for its shallow root system and to adapt to chronic injury such as fire and fungal attacks. In fact, the root system is so sensitive that even walking near the Red Tingles can cause injury, which is one reason why the Tree Top Walk was constructed. 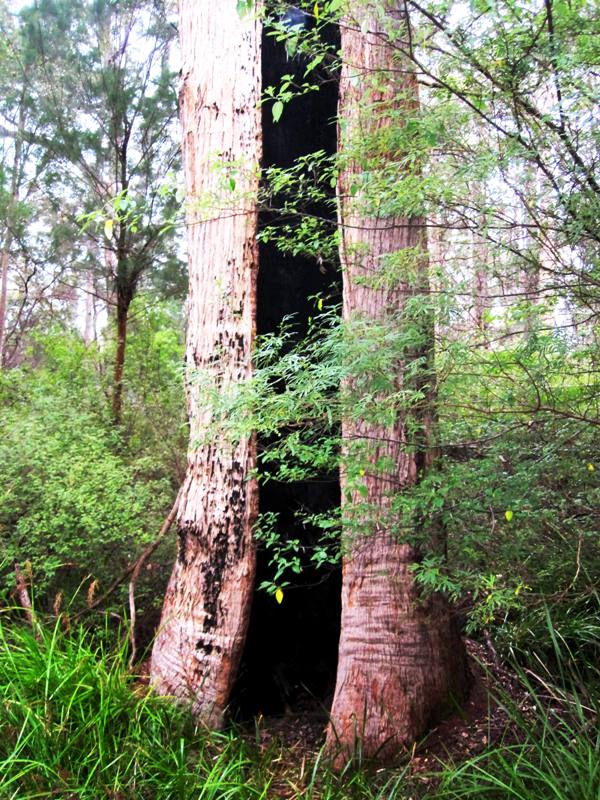 After the walk, we drove south for about another twenty minutes to reach the Conspicuous Cliffs and their matching Conspicuous Beach. I’m not sure where I read about this place, but ultimately, we wanted to visit simply because of the name. Also, it sounded like something out of Princess Bride, so….

Turns out, this place — which is one of a zillion pristinely-maintained national parks here — did not disappoint. It was so stunning, that the reason why it is dubbed Conspicuous was completely conceivable. In short, we do think it means what they think it means. 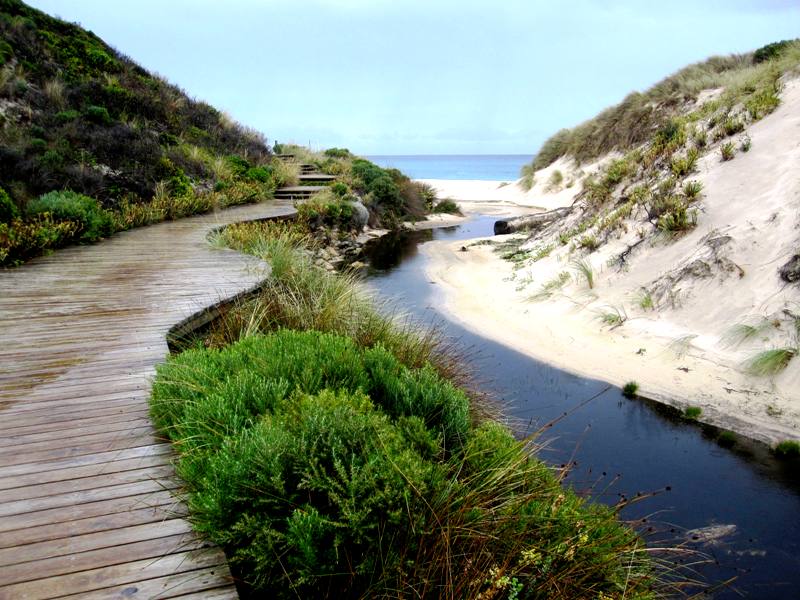 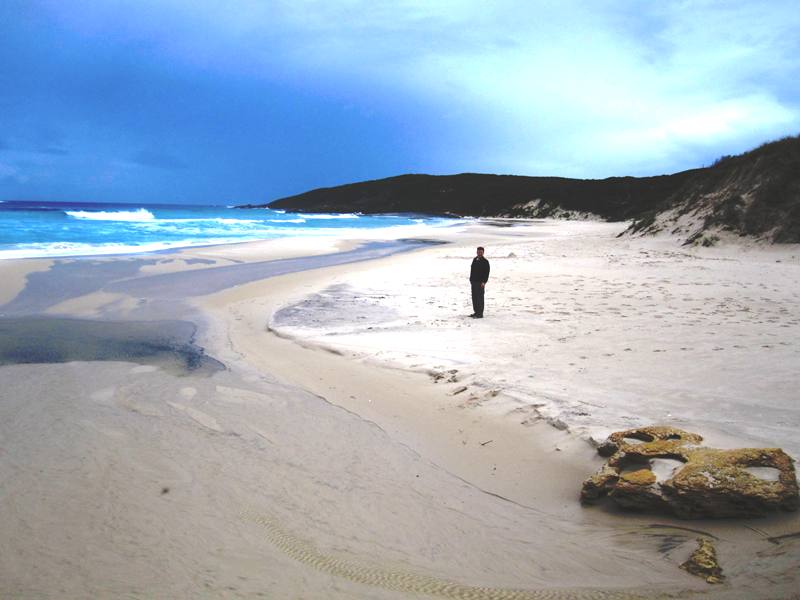 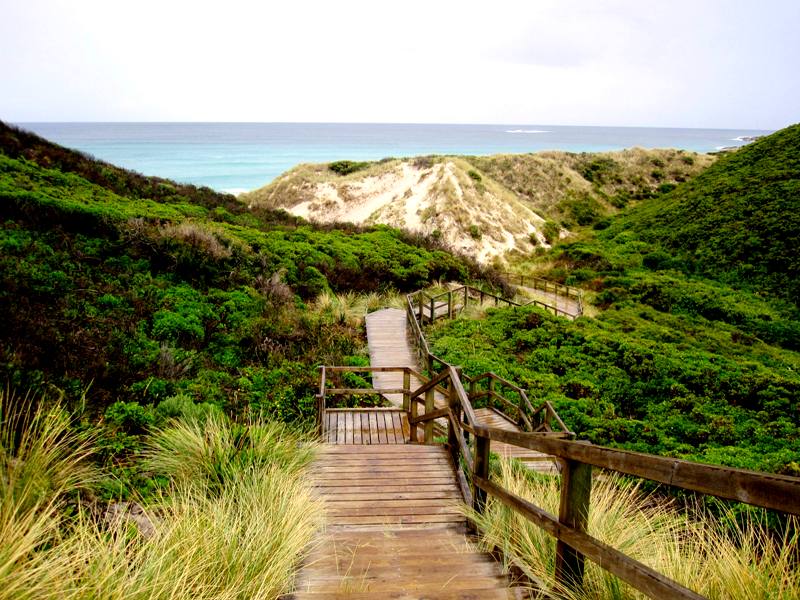 We even saw a grey kangaroo lounging in the bush as we followed the pretty, boarded path from the beach to the cliffs above. It sat so still that at first, I thought it was dead. 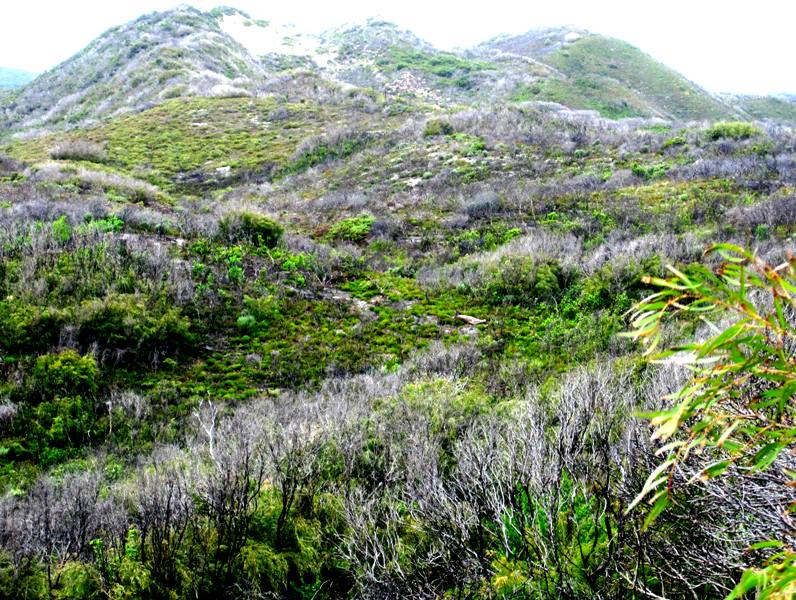 From the Conspicuous Cliffs, we drove west for about two hours to Pemberton: a village the guidebooks describe as a charming logging town worth spending at least a few days in. Maybe it was because of this description that we found ourselves a bit disillusioned upon arrival. It’s not that Pemberton doesn’t have some charm to it — it certainly does — but I’m not sure what makes it stand out amongst other towns in the area. Admittedly, the weather was a bit cold and drizzly while we were there, so it killed some of the outdoor activities on offer like mountain biking, which looked pretty fun as Pemberton has a cycling track through the woods on the outskirts of town. But while the town itself was just so-so in our opinion, the surrounding area offered many things to do. There are several wineries, a micro-brewery or two, national parks where the famous Bibbulmun hiking track and mixed-use Munda Biddi Trail cross through, and the giant Karri “climbing trees,” like the Gloucester below, that soar 72 meters high. There is also a little trolley departing from Pemberton most days of the week that takes one through the forests, but we decided to skip that and do our own self-drive. 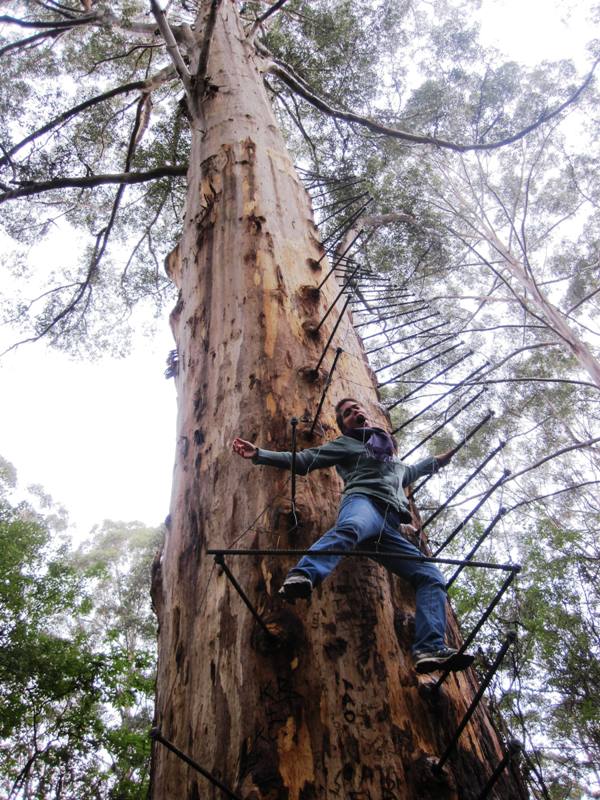 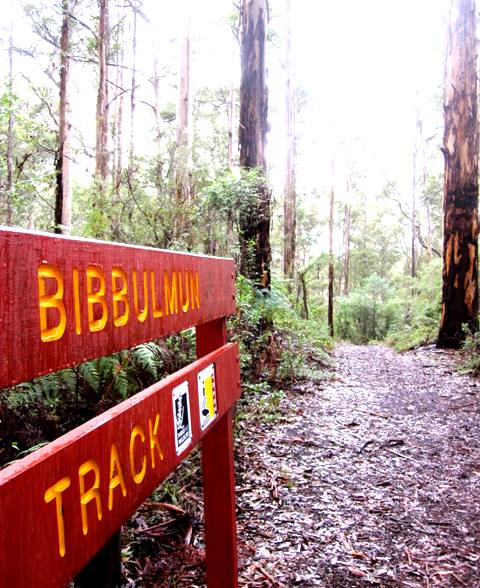 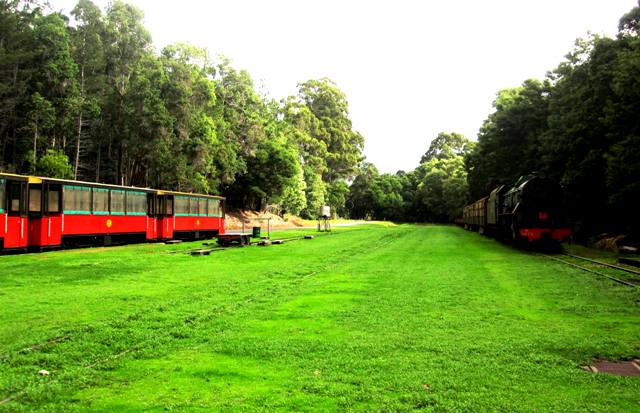 We arrived in Pemberton in the afternoon, so we visited the interesting Visitor’s Center and tooled around town for a bit. Highlights for us were walking under the towering eaves of the Karri and Tingle trees, attempting a bit of the Gloucester (before my legs started shaking too much to continue), and visiting the Jarrah Jacks Brewery. This latter activity comes highly recommended: it’s actually located within a winery a short drive from town, so if you’re torn between wineries and micro-breweries, then you get the best of both worlds. And the french fries we ordered with our ginormous “sampler tray” were amazing. 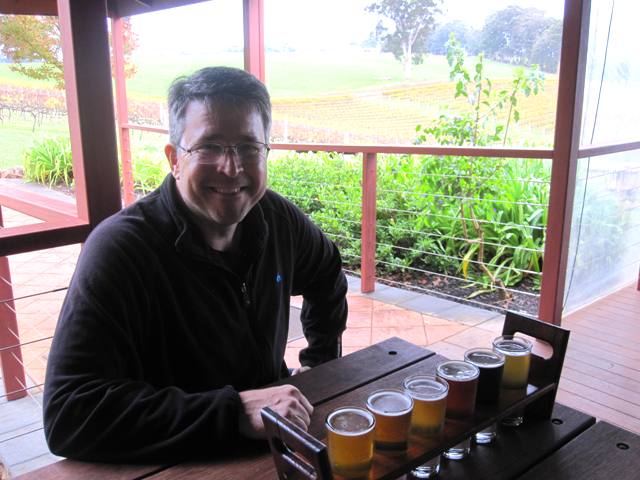 We stayed the night at Karri Forest Motel and had dinner at Cafe Mazz, which I think is one and the same as the Best Western restaurant (various guide books refer to them differently).  I ordered the trout special and Sam had lamb; both plates were impressively huge to look at, but I found the trout to be more or less flavorless to be honest. That said, considering how expensive going out to eat in Australia is, Cafe Mazz definitely provided bang for the buck in terms of food portions. If I were to eat there again, I think I’d try a less healthy option as their fried foods and burgers looked pretty delicious! 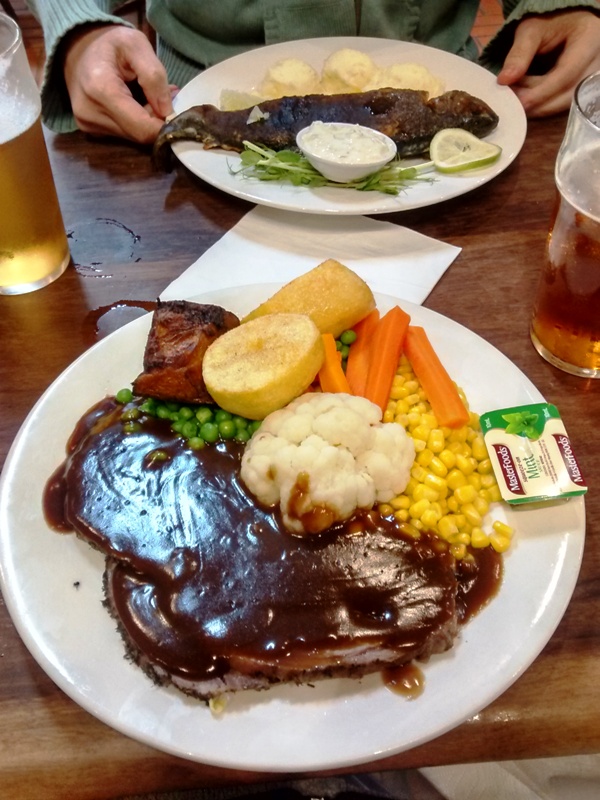 So that’s the first leg of our Seven Day Road Trip through Western Australia. Coming up: Pemberton to Cape Leeuwin, then up Caves Road to the famed Margaret River.