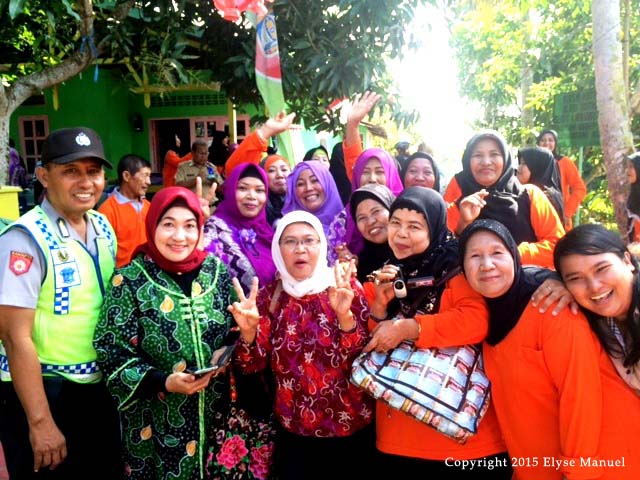 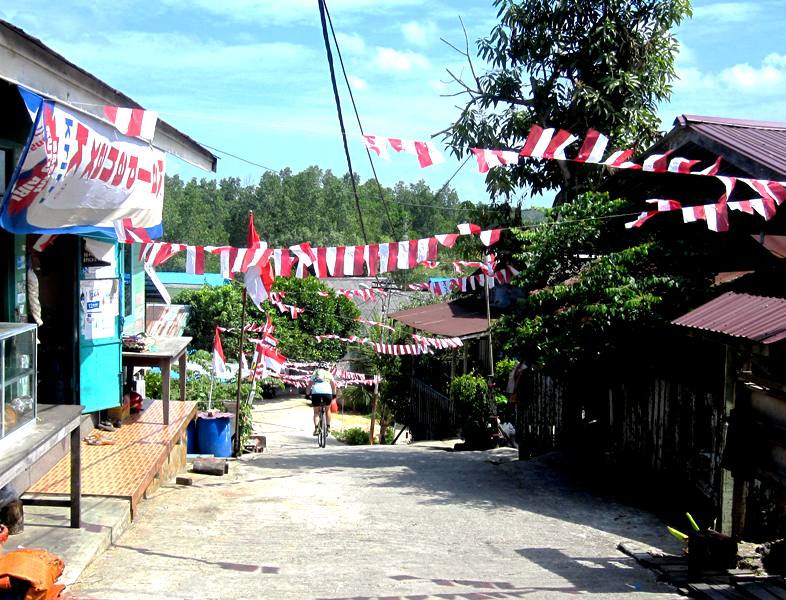 Indonesia’s Independence Day, August 17, is right around the corner, and the streets festooned with mini Indonesian flags and garlands of red and white painted party cups make this a fun time to stroll or bicycle through the villages (“kampungs”).

This Wednesday, the BIWA cycling group did just that. 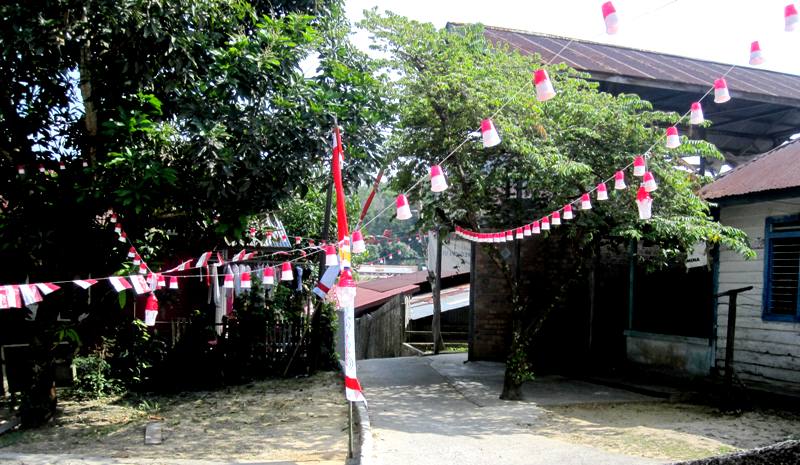 Bike rides with the Balikpapan International Women’s Association (BIWA) cycling group are always an adventure; if for no other reason than because you never know what you might stumble upon. Every Wednesday morning at around 8:30, we meet at a location pre-determined by Pak Yayan, don our helmets and gear up for a two-hour tour of some little nook of this city we’d never otherwise experience. And this Wednesday was no exception … but it certainly ended more unexpectedly than most.

We began our adventure at the football field off Oil Road (Jalan Minyak) — an ordinary enough location, granted — but somehow, within an hour, we’d cycled past little garden spots like this one where a cute wooden arbor drips with [what I believe are] passion fruit (“markisa”), then through forest, then the Pertamina housing development, and eventually finding ourselves pedaling over boarded water pipes that wind through kampungs! 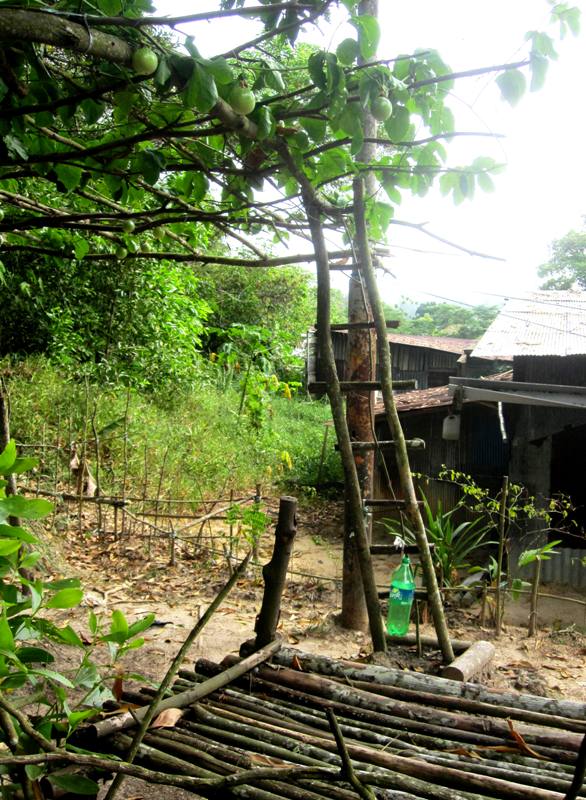 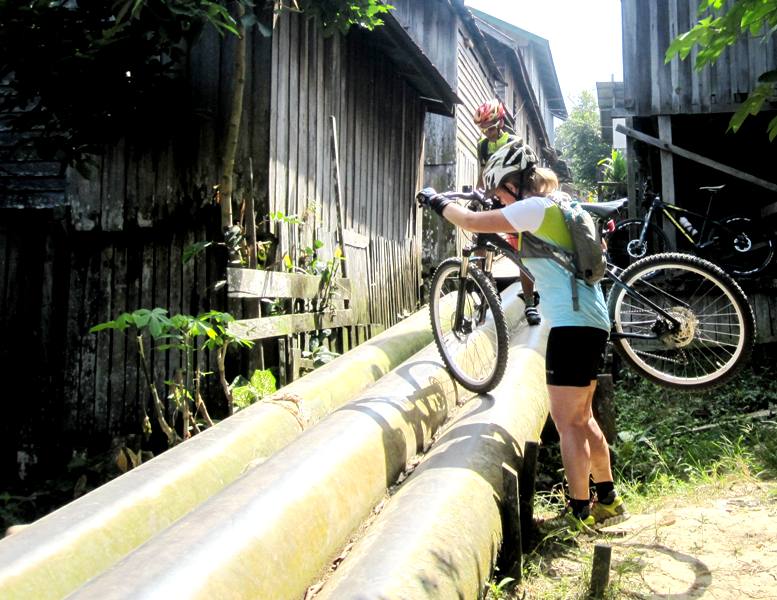 These water pipes begin at Pertamina’s Sungai Wain reservoir (another BIWA cycling location), then snake kilometers through mangrove forest, over the Somber River, between kampungs where inhabitants ingeniously cover the pipes to turn them into a little boardwalk, and end at Pertamina’s water repository for Balikpapan. 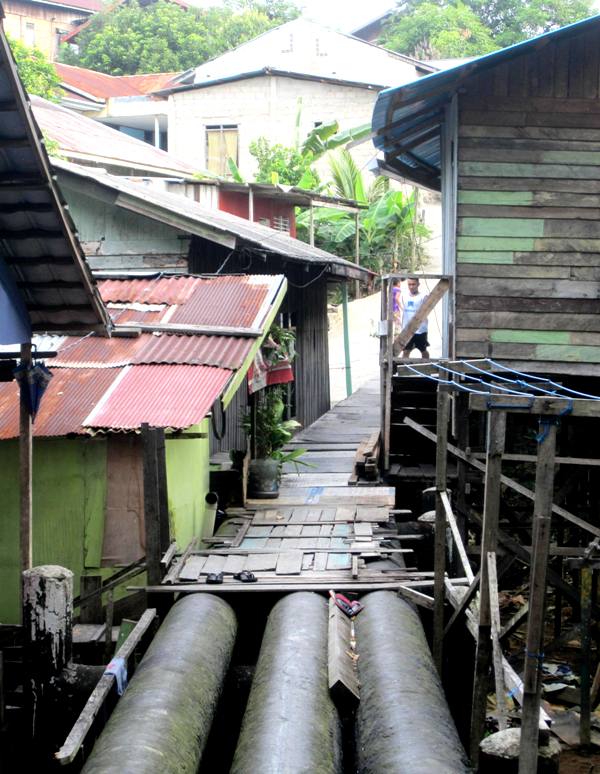 We only cycled a short distance over the boards before we found ourselves once again on a concrete alleyway (“gong”) that wove through a particularly scenic kampung area designated as RT 38. 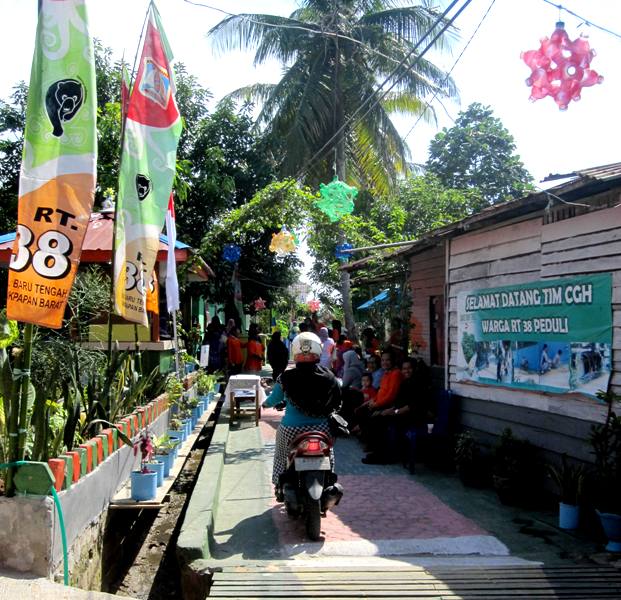 And that’s when it happened:

We noticed there seemed to be some kind of celebration going on in front of us, as groups of people where gathered along the gong with matching orange shirts — not to mention the cute party balls strung overhead made from recycled plastic bottles.  And as we approached, the strangest thing happened. I can only recite from my perspective as the event was rather overwhelming, but I remember Anneke going first, carefully passing through the “party zone,” much to the astonishment of the revelers who most likely did not expect to encounter a cycling foreigner (“bule”) crashing their block party. 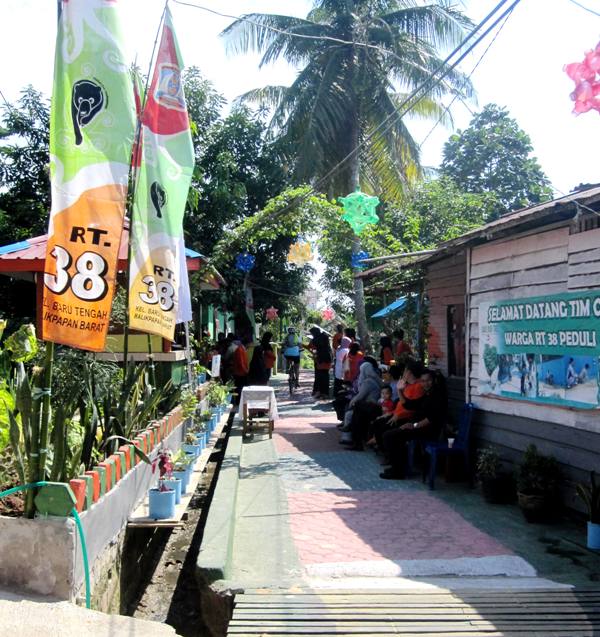 Alerted to this novelty, the people turned to me as I approached, waving me forward. I followed Anneke’s lead, slowing down to pass through the party zone when, in the next minute, it felt like twenty arms were reaching over and around and at me — like an extremely gentle football tackle — then I vaguely recall happy shouts and exclamations as the flurry of arms turned me around and I found myself in a barrage of cell phones flashing their cameras. It was the funniest thing and I think I was laughing as the crazy flurry of hands and arms tugged at my sweaty back and waist and some woman even gave me a huge smackaroo on my face — not a demure kiss-kiss from cheek to cheek as is quite natural here, mind you — but a full-on juicy smack! I wasn’t sure whether to laugh or apologize at that as I was disgustingly sweaty and stinky, so I think I settled for doing both, to which one woman replied, “Don’t worry, you don’t stink that much!” 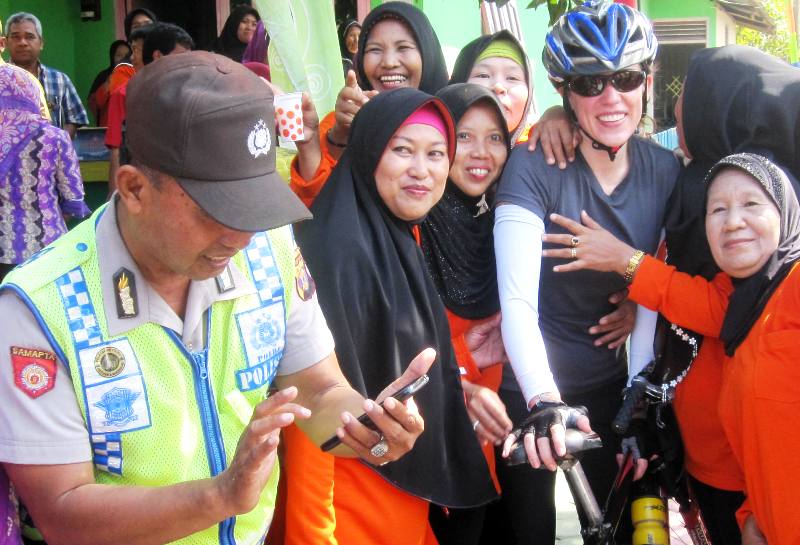 By the time I had my wits about me to hand someone my camera to record the craziness, the mayhem had already died down considerably. Camera returned, I managed to get this one of Elyse who was in front, but I never got a photo of Anneke as she had disappeared somewhere in the insanity. 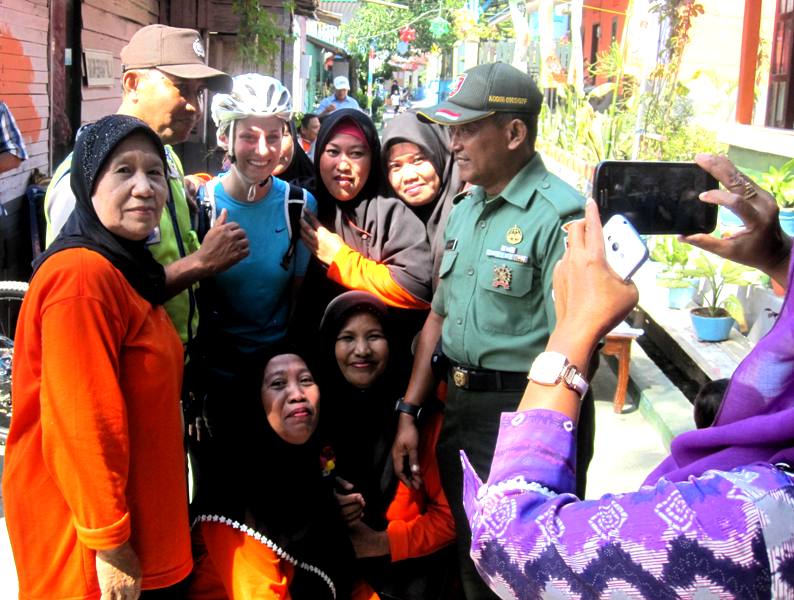 Once I extracted myself from the photographs, one of the ladies kept insisting we eat some of their little finger-foods made of tapioca (“singkong”). When I explained that if we ate, it would give us tummy aches when we began riding again, she insisted I take some to go. This resulted in my following the woman to the snack table where various tapioca goodies where loaded into a bag … and I was instructed to pose for more photos. At one point, a lady behind me complained, “She’s too tall! You can’t even see me!” This was quickly resolved by shuffling me to the back as cameras snapped away. So funny! 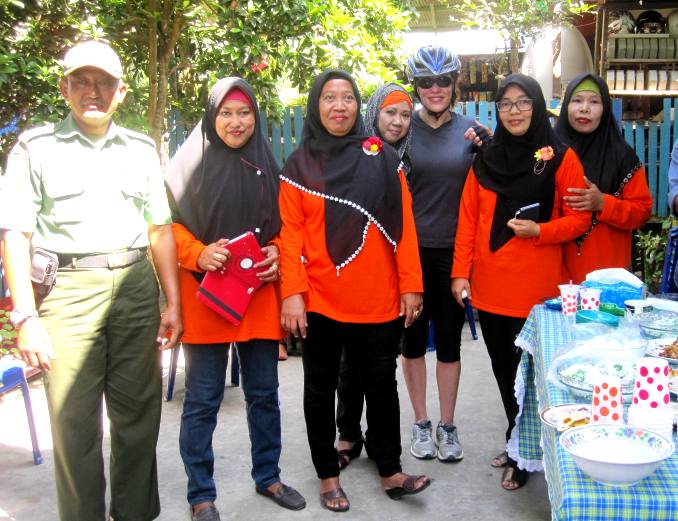 Eventually, we discovered that the party was a celebration for RT 38 winning a Balikpapan-wide “Clean Village” competition. We all agreed that they certainly deserved the award as their village was truly clean and so festively decorated. If there had only been a “Most-Enthusiastically-Hospitable” competition, they would have won that as well!

By the time we took our leave, I had a bag of tapioca finger foods dangling from my handlebars while Anneke received a huge bag of fried snacks. So, with bikes laden with swinging tasty treats, we bid adieu to our new friends and made our way to the old ferry terminal (Pelabuan ferry tuah), off Semarinda Road Kilometer 3, where our ride concluded. 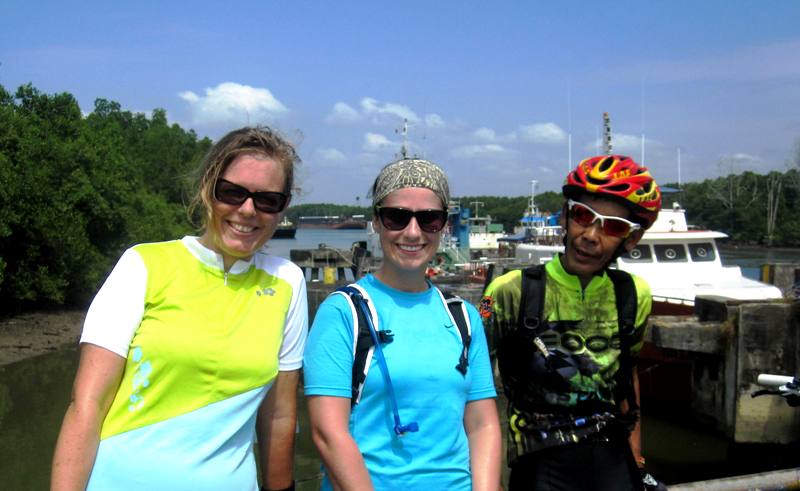 And this morning, I collected the local papers to find the following item in the Balikpapan Pos, where our little adventure (Elyse being front and center) is referred to in the caption as laughing bule cyclists, together with an accounting of the “three biker bule ladies” crashing their party, which, alas, I do not yet have sufficient Bahasa skills to adequately interpret. I just hope that our encounter with the merry makers of RT 38 was even half as fun and hilarious from their perspective as it was from ours! Also? Congratulations RT 38, for being clean and green! 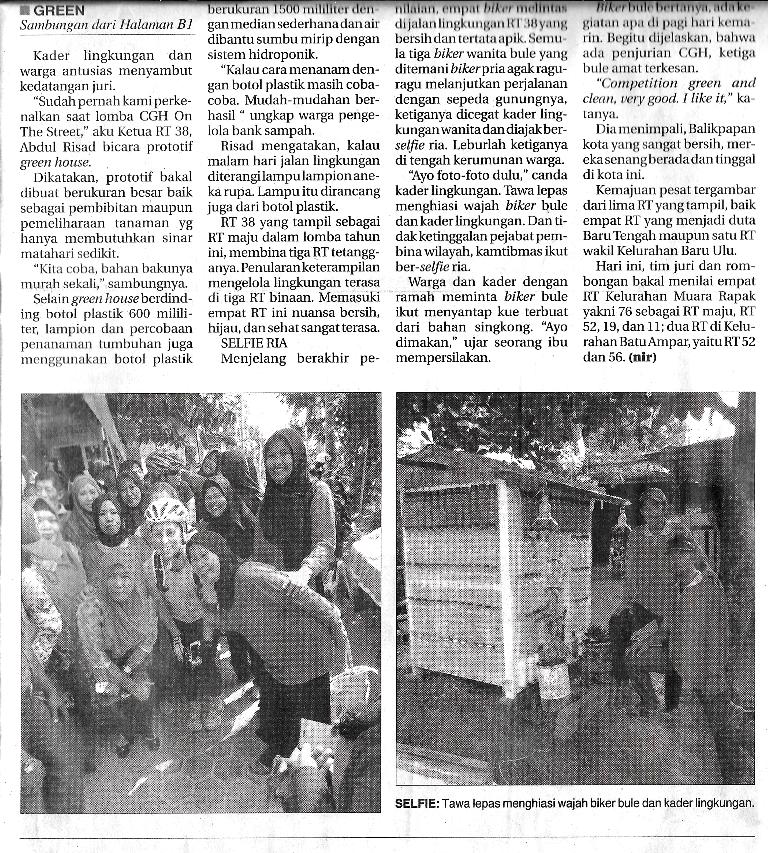 For more on cycling in Balikpapan and the Balikpapan International Women’s Association, check out my piece at Indonesia Expat magazine: http://indonesiaexpat.biz/travel/taking-a-spin-in-kal-tim/