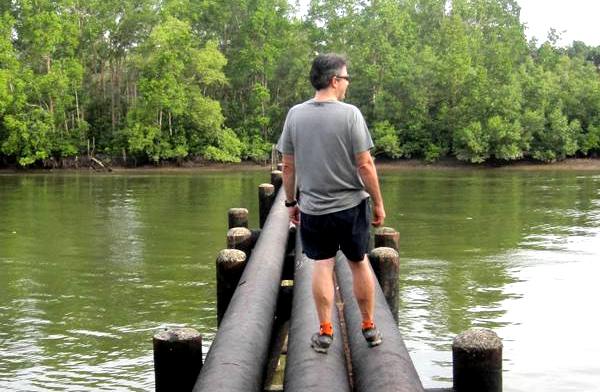 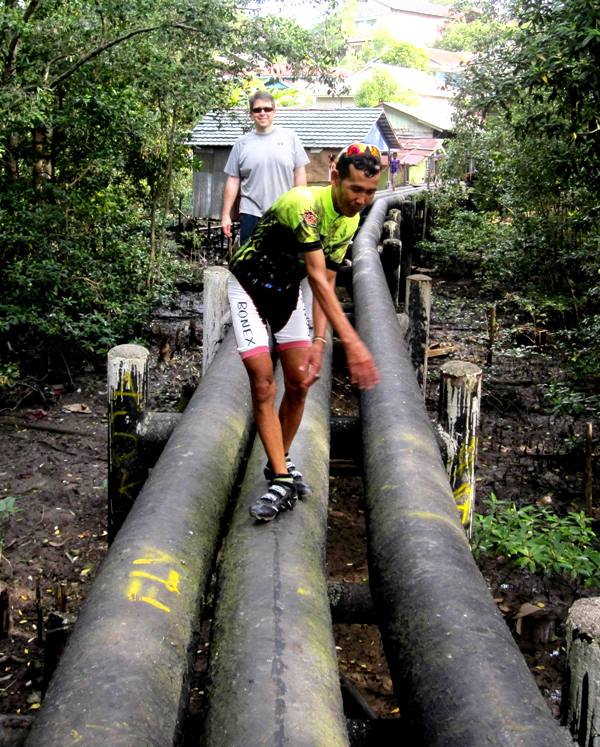 Living in Balikpapan, Kalimantan, Indonesia is, for the most part, like living anywhere else … sort of. Even if you’re here as a dependent instead of the work visa spouse, you still have your chores and errands: shopping for groceries, house cleaning, laundry, exercise, cooking, and all the other day-to-day activities that are a part of being a human.

Except shopping for groceries here takes the experience to a whole other level and at least three times the amount of time. Even when you get home from the slurpy pasar or nearly equally slurpy grocery store, you still have to scrub down your eggs and apples and bell peppers with soapy water, wash your lettuce with diluted bleach water, rinse the freshly-chopped chicken and then bag it for freezing, etc. Fun stuff, right? And for the most part, when it comes time to cook, most things here are made from scratch, with none of that already-roasted rotisserie chicken to pop into the microwave. I’m not complaining, actually, because I think this forces us to live healthier, simpler lives for the most part.

But one activity that is almost always a guaranteed adventure involves simply stepping outside just for fun. Whether you’re walking or shopping, running a hash or cycling, something wacky and wonderful is sure to be around the corner. For example, the week before last, I posted about the Balikpapan International Women’s Association “brush with fame” and coinciding bike ride that had us ending our cycling journey at the old ferry terminal along Balikpapan’s Somber River. That experience still makes me chuckle when I think of it, but it’s the bizarro thing that occurred when Sam, Pak Yayan and I finished our ride at that same spot that really takes the cake. Here’s what happened:

On a Saturday late afternoon, Sam and I had ended our cycling at the old ferry terminal, loaded our bikes onto the back of our Kijang and headed back towards camp. But less than ten minutes into our journey, my cell phone rang. It was Pak Yayan, who was still at the terminal, calling to tell us that proboscis monkeys had ventured out from the mangrove forest and could now be seen along the riverside!

We’ve attempted several times in the past to visit these interesting animals who live within the mangroves here, but to no avail. Excited at the opportunity, we turned around and headed back to Sungai Somber, camera in hand. Unfortunately, that camera is a tiny, automatic that’s great for taking on bike rides (which has since become no more as I recently lost it over Independence Day weekend while on a short jaunt to Bali gone horribly awry — more on that later), but not so good when one needs to zoom in on something. So when we reached Pak Yayan and squinted across the river, we could spot the distinctive orange coats of the proboscis monkeys, but we couldn’t see much more than that — especially not their strange, unique noses that we’ve been so curious about. 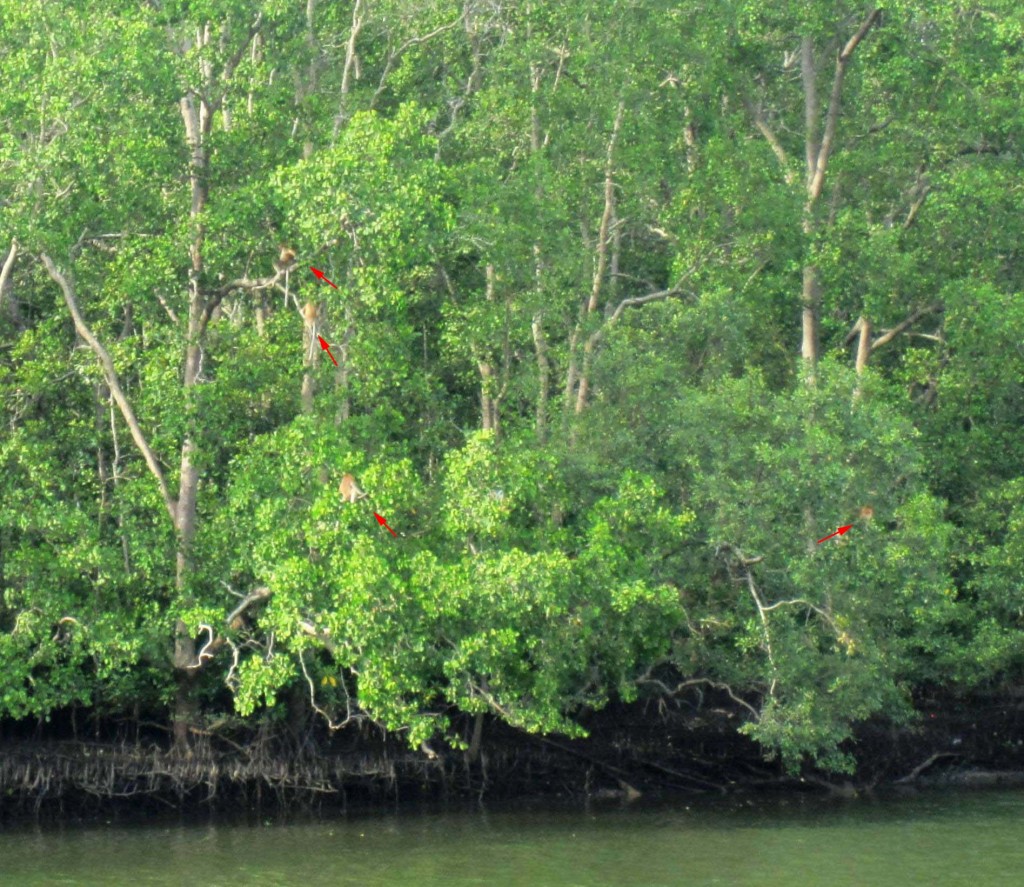 That’s when things got interesting, because Pak Yayan had a plan. He pointed over the river, directly in front of where we stood — indicating a pipe bridge that spanned across the waters, thus leading from the city side where we were, directly into the mangrove forests where the proboscis monkeys were!

“People fish on those pipes,” said Yayan, still pointing. “We could follow them into the forest for a better look if you like. The pipes go on for kilometers; they lead from the Sungai Wain Reservoir  and feed into Pertamina’s (the Indonesian government-run oil company) water supply for the city.” 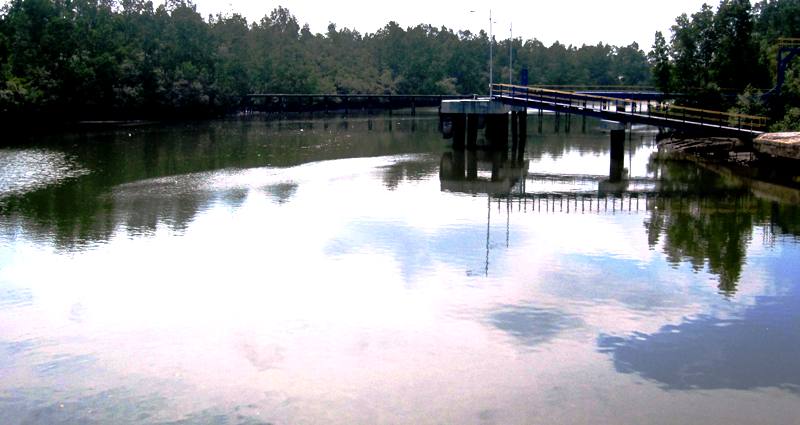 Sam and I were momentarily taken off guard. “Really?” we asked. “That’s allowed?” To which Pak Yayan laughed his signature ha-ha-ha-ha, and then led the way via foot from the ferry terminal, up the hill toward the main road, then hooking left into a kampung. Here, we wandered left-ish until the Pertamina water pipes were found. At first, the pipes are cleverly boarded over and used as a sidewalk within the village. As soon as they near the river, however, the pipes turn into a bare, three-barrel bridge whose gaps grow increasingly wide the closer you get to the mangroves on the other side. 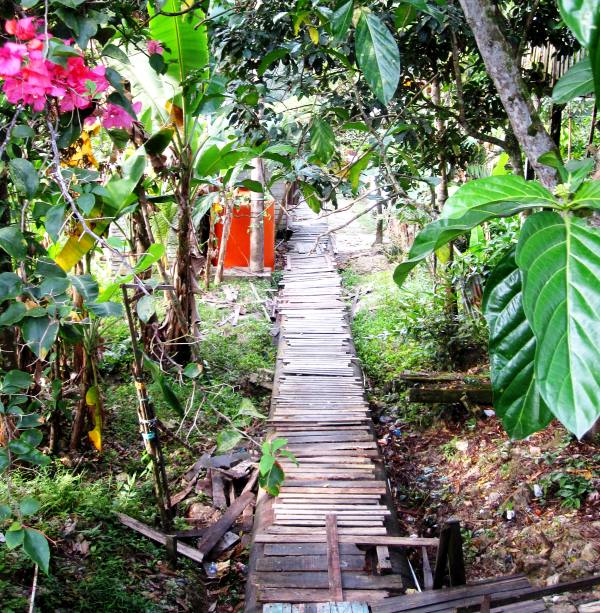 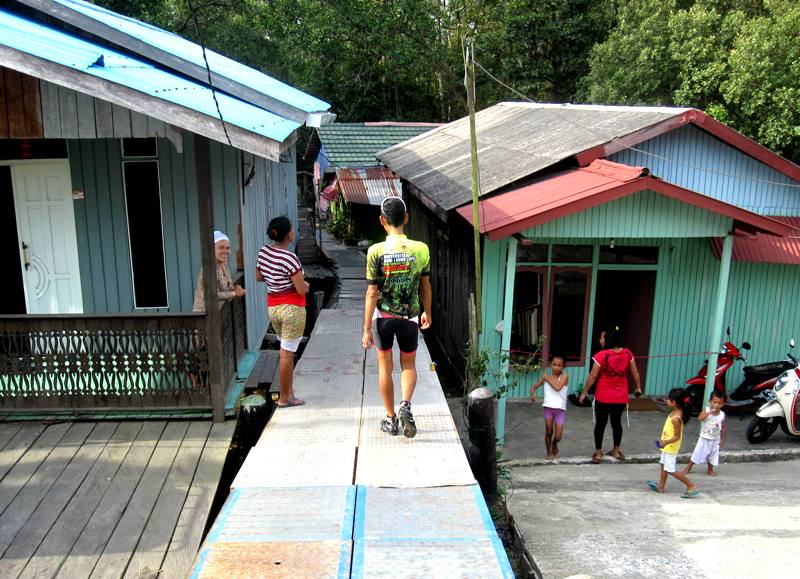 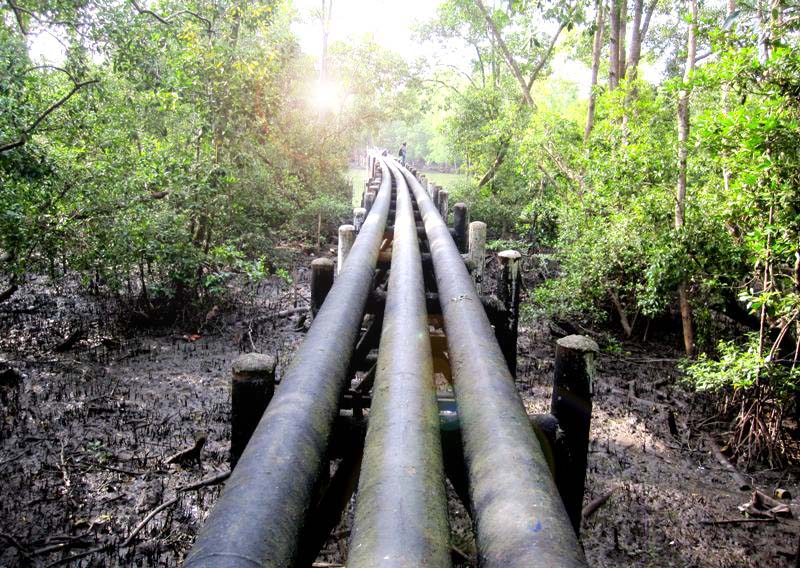 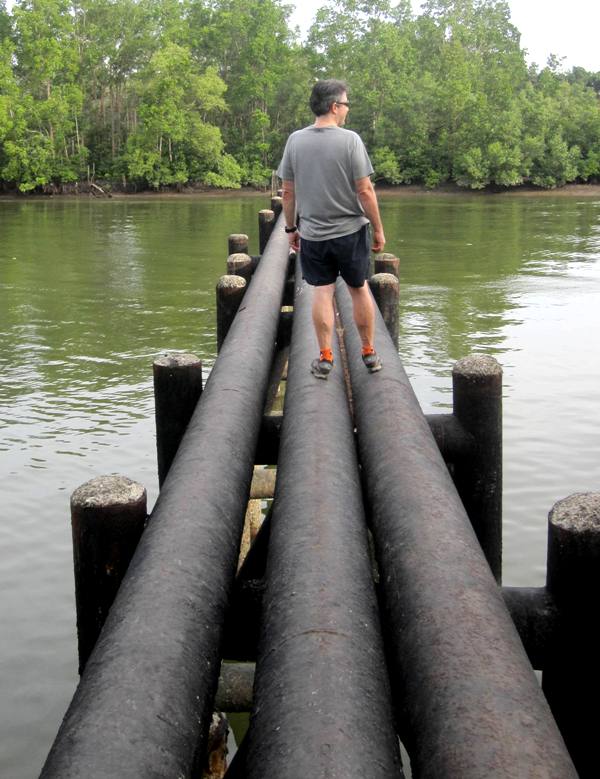 Halfway over the river, clusters of fishermen try their luck in the waters. It was strange squeezing past them as we continued our journey toward the mangroves. Most of the fishermen edged a bit forward to give us more room as we wobbled past, but some grew visibly annoyed with us. I mean, for them, they’re just fishin’ — same as they always do on a nice evening — and here come these big bules wobbling all over the pipes with stupid, excited grins on their faces, gabbing on about the monkeys on the other side that are equally unremarkable to them! Poor guys.

One of the fisherman told us to be quiet, and we quickly complied, sheepish of our excitement. But even in my eagerness to get close to the proboscis monkeys, I was still a bit unnerved at times by the height and … er, lack of proper bridge-y-ness. Pak Yayan practically danced over the pipes, but it was all I could do to keep my balance, continue onward and not fall head-first into one of the fishing boats plying through the waters below! 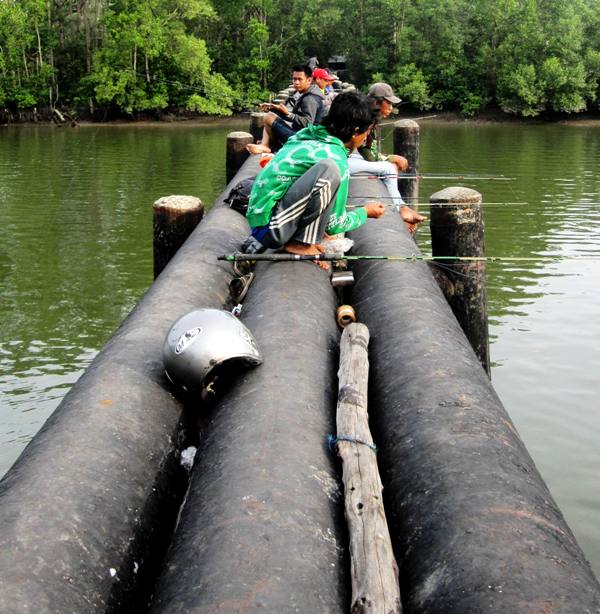 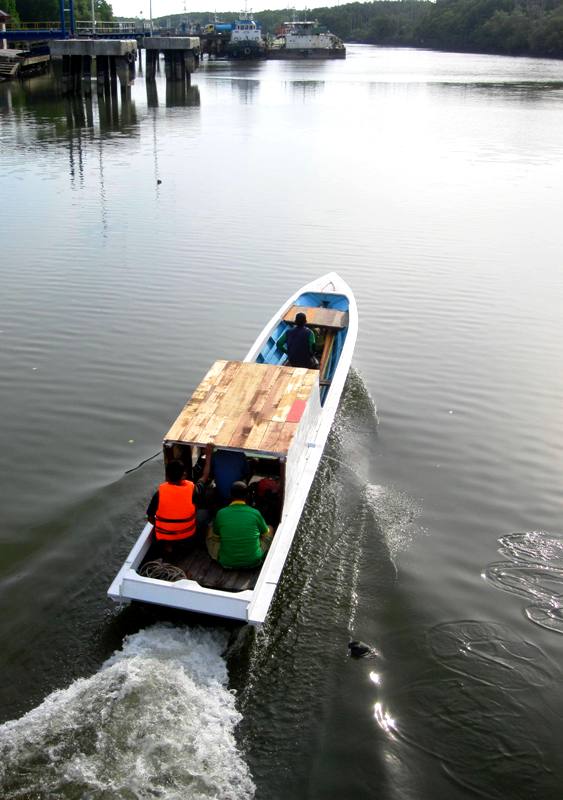 On the other side, the pipes grew wider and wider apart until I admitted I was too chicken to continue on, for fear of falling between them and into the slurpy, murky mangrove waters/mud/trash/unknown-particles-but-certain-to-contain-sufficient-sums-of-monkey-poop below. And though we did spot a good number of proboscis monkeys, they moved so fast — and for the most part were so high up — that it was impossible for me to capture a decent photo. Part of the problem was that, in order to photograph the monkeys, you had to stand on one of the pipes while craning your neck sky-wards, camera held high on the ready.  This, in turn, created an unexpected feeling of vertigo, so that I frequently found myself wind-milling my arms to keep my balance instead of holding the camera like the professional I apparently am not. Sigh. My fantasy of being a National Geographic Photojournalist is officially dashed. 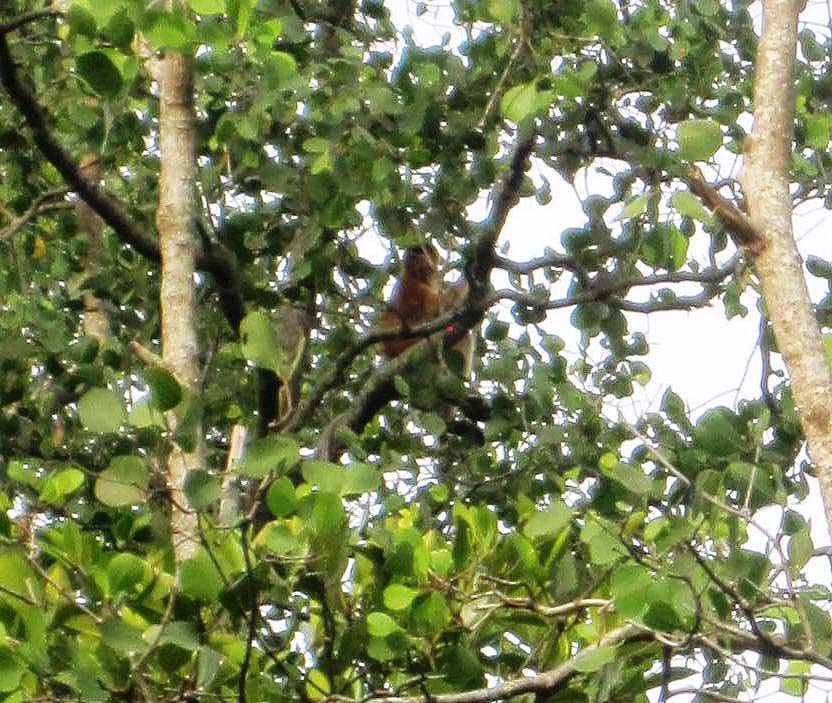 And even though we never got a good shot of the proboscis monkeys, just seeing and hearing them in their natural habitat was amazing. Their call is high-pitched and rapid and fills the air so that it sounds as if you are surrounded by a strange flock of birds. These guys are super acrobatic, too — they leap from treetop to treetop with astonishing speed and agility. Their jumping distance really surprised us; due to their speed, it was hard to make an accurate estimation, but it seemed they could leap sideways at least ten or so feet, and when they’d drop southwards from tree to tree, it was like watching a bizarre roller coaster ride. I was so surprised by their movements, that I almost fell backwards a few times. Thank goodness I didn’t because I do not want to find out what’s in that scary water below!

In short, the experience was amazing. We’re just not sure what part was the most fun: the adventure of walking over those Pertamina water pipes or finally visiting proboscis monkeys! And that’s the kind of magic that happens when you step outside to explore a bit of Balikpapan!