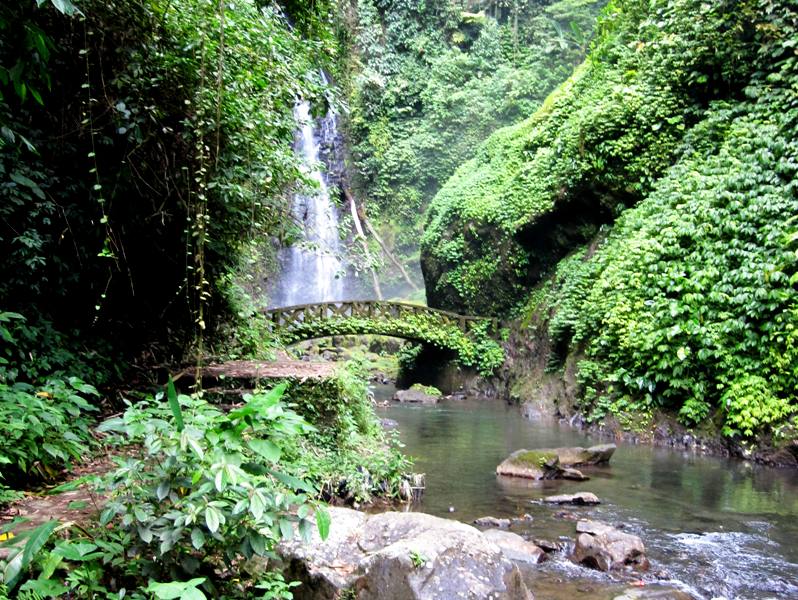 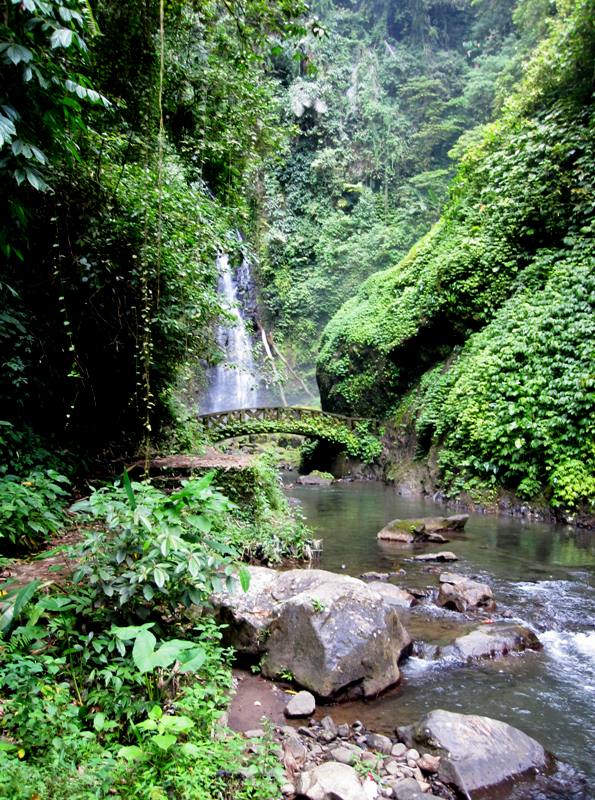 Kali Waterfall (“Air Terjun Kali”) is located in the rain forest surrounding Kali village, about twenty or so minutes from downtown Manado. Along the way to Kali, tarps spread with freshly plucked cloves (“Cengki”) dry in the sun. Sulawesi is one island west of the famed Spice Islands, where Columbus himself set sail for, so no wonder cloves are found here in abundance! 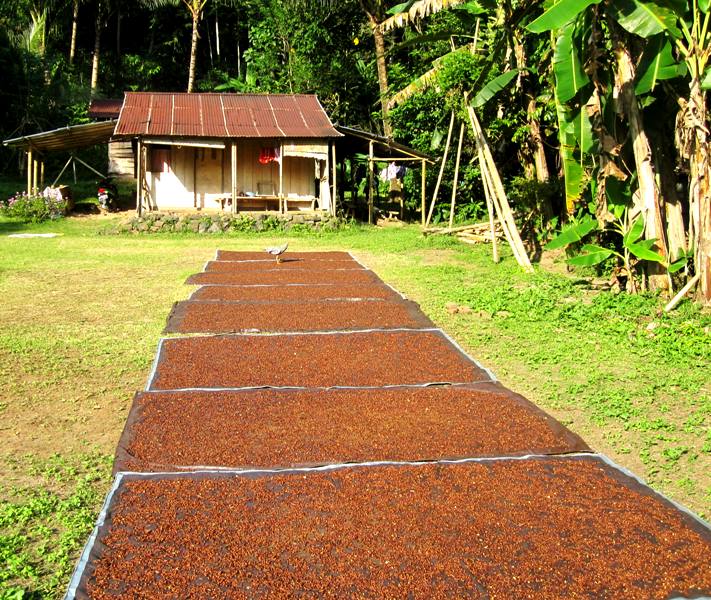 Getting to the Kali Waterfall trail head is an adventure in itself: once inside Kali village, a narrow, crumbly road climbs at an angle of about thirty degrees around a reinforced hill. To one’s left, a concrete wall practically scrapes the side mirror and to one’s right, there is … absolutely nothing. Well, except the stones scattering off spinning tires, which then fall to their depths, far, far below. Our poor taxi driver, Pak Noldyanus, sweated bullets as he yanked his emergency brake, shifted gears, spun more tires — all in an effort to reach the hilltop before his little sedan followed the route of the stones I was watching with increasing agitation. While he remained remarkably calm during the whole endeavor, I confess to freaking out a bit at one point when we started to roll backwards, and as I clutched the shredded vinyl seat with my fingernails, I turned to Sam and said, “Holy sh**. Should we get out?”

“I don’t think that’s an option,” Sam replied, just as Pak Noldyanus revved the engine again, splattering rocks like a hailstorm as all four tires churned up enough dust to at least obscure the scary chasm to my right. But he got that car going again and didn’t slow down until we reached our hilltop. 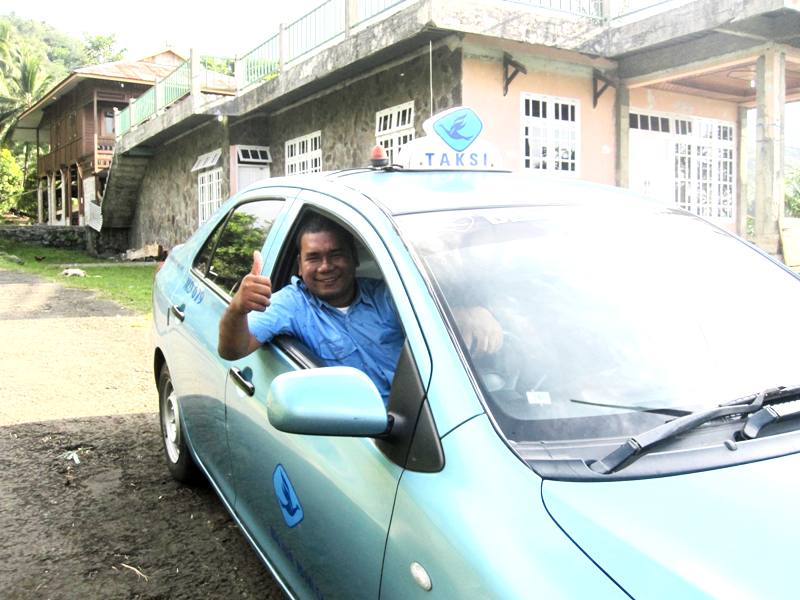 While information I found on Kali Waterfall said there was a small entrance fee, we didn’t encounter anyone or any place for such a collection, so we just thanked Pak Noldyanus for his skillful driving and headed off with shaky legs for our jungle trail. 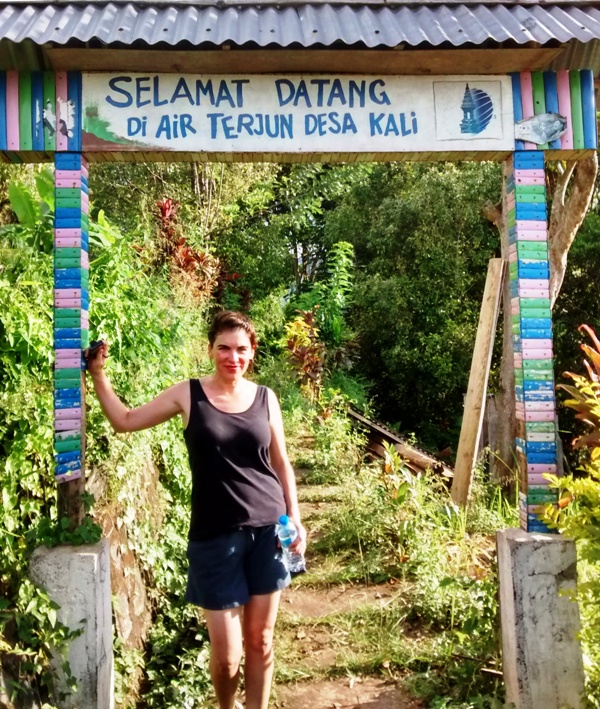 From the condition of the road, the fact that no one seemed to know exactly where the waterfall was located and then the actual trail to the waterfall itself — which was more or less overgrown, we gather Kali Waterfall isn’t as visited as it once may have been. Too bad for everyone else because this just might have been the highlight of our Manado, Sulawesi mainland activities. 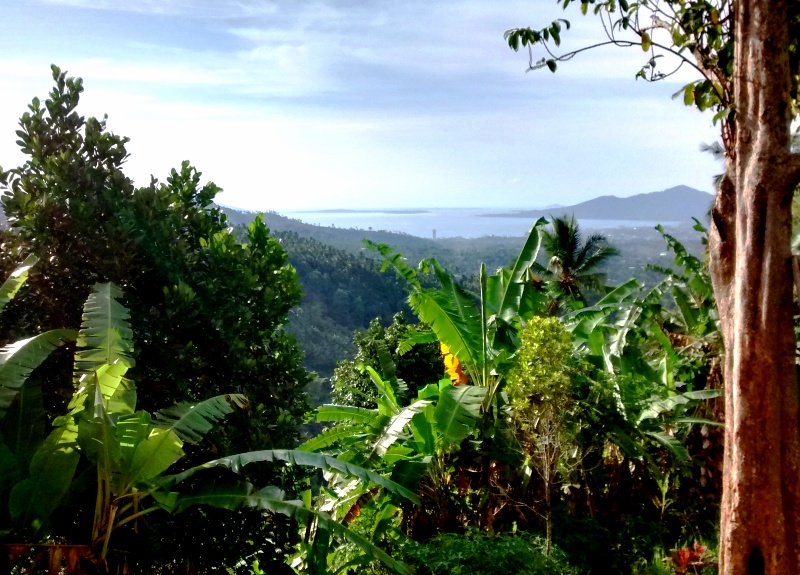 The view of the sea from our jungle hilltop was gorgeous, and as we ventured deeper into the forest, we noticed all kinds of interesting vegetation, such as Kenali nuts (these are the nuts from which locals make a nougat-like dessert called Halua that we tried at Bunaken Island), and cocoa trees. Turns out, the fruit in those cocoa pods (the flesh surrounding the actual beans) is soft and sweet and tastes a lot like Indonesia’s fabulous manggis/mangosteen fruit, if you’ve ever had that. As they’re both evergreens, I wonder if the two are closely related? 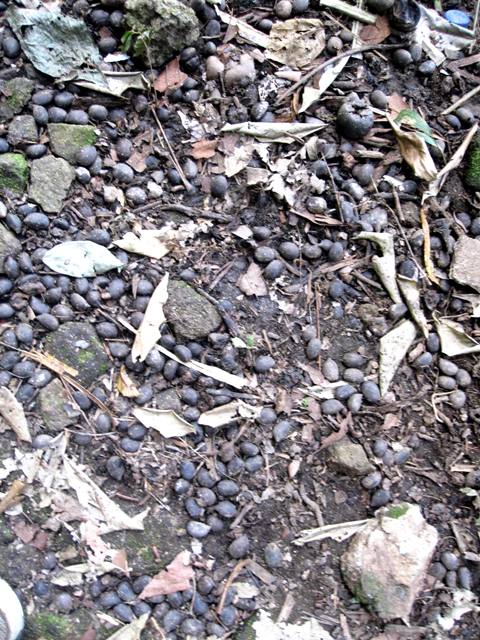 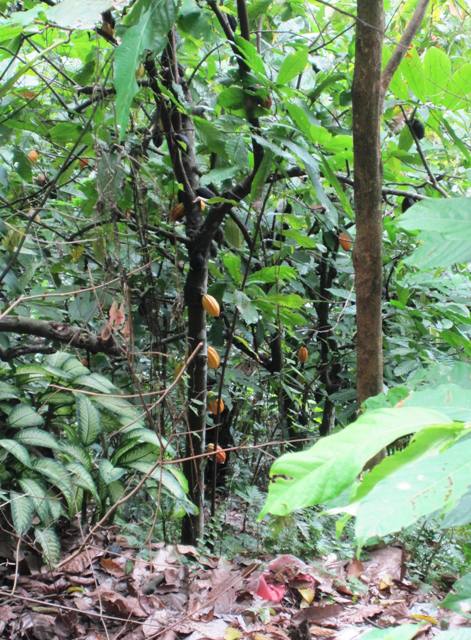 Heading further in and downward, the trail grew increasingly ramshackle. At first, it was quite beautiful, but as the path began to disappear into undergrowth and trees lay felled across our way, my imagination ran awry with images of slithering things I had no wish to encounter. That said, if it weren’t for my fear of snakes (which tends to put a damper on things), I’d wholeheartedly say that the general state of nature-gone-unchecked really added to the atmosphere. 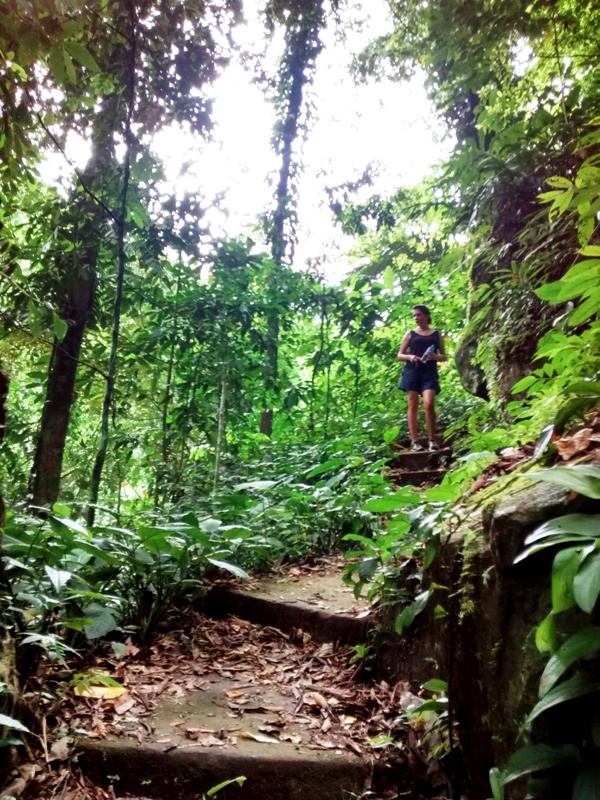 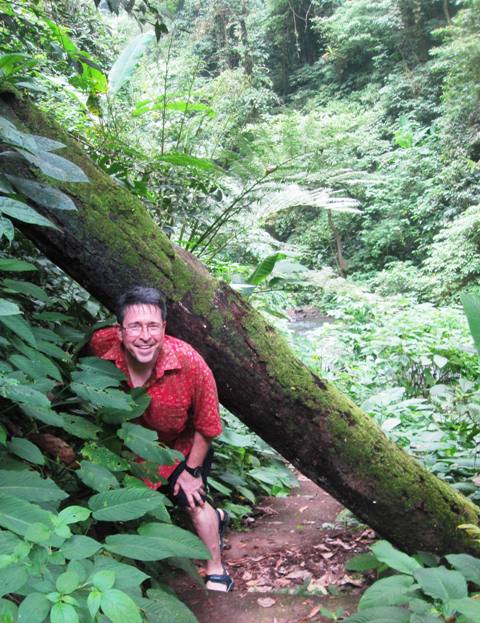 After about thirty minutes of gradually winding downward, the sounds of the waterfall announce journey’s end. At first, all one can see is a pretty river cutting through the forest, but following the river toward the whooshing water sounds, the forest suddenly morphs into a fairyland. Green moss enshrouds everything — the earth, the rocks, the trees, everything — and as one approaches the slippery, moss-covered bridge, the mist and sprays from the waterfall permeate the air, so that breathing and swimming feel nearly one and the same. 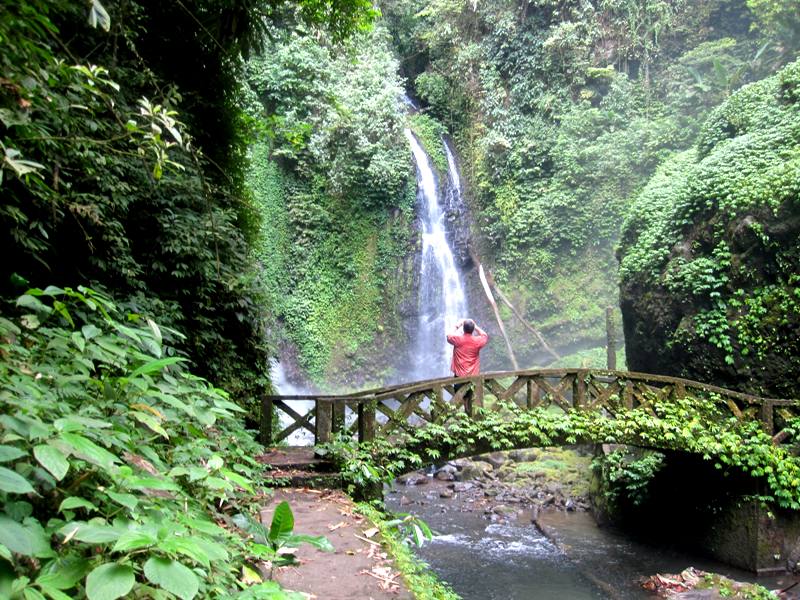 We didn’t swim in the pretty little pool, which, turns out, is fed from two waterfalls rather than one, but even standing twenty or so feet away, we were still soaked through and through. It felt really good, actually.

Our only complaint was that the earth was so soft and slippery, and the spray was so fierce that it was impossible to get close enough to get a decent shot, partly because we were blinded by mist and water and partly because our cameras were, too. In any case, the falls are said to be 60 meters and 20 meters high respectively. Whatever the measurements, it was stunning to see and to have it all to ourselves. If you ever have a chance to visit Manado, we definitely recommend making the trek to Kali Waterfall! 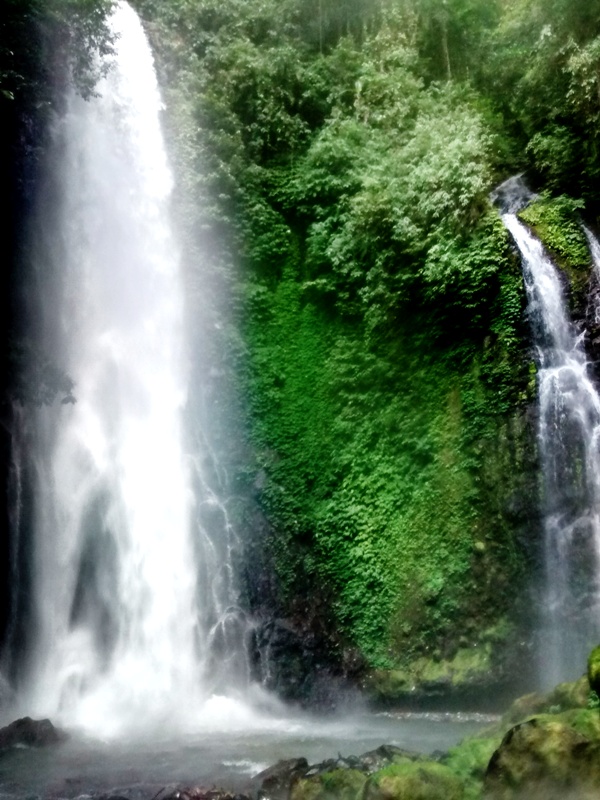