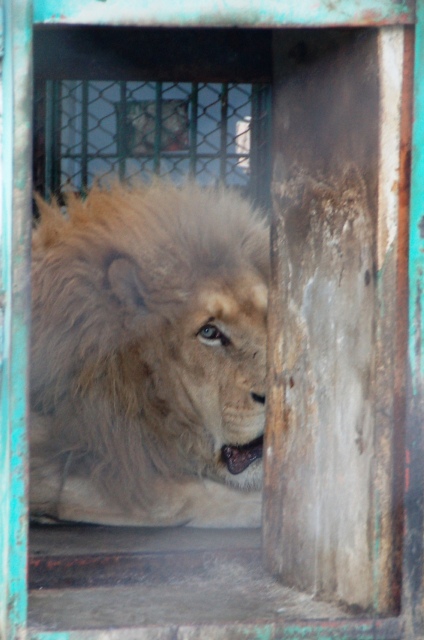 Because of Harbin’s diverse past, Russian architecture, Jewish synagogues and some unexpected food choices await.  So if you came here for the ice festival and are wondering what else there is of interest, here a few of the highlights:

Stroll the Pedestrian Street, Zhongshan Dajie that cuts through the center of Harbin’s Old Town.

Walk across Songhua River to Sun Island (in the winter only, of course).  Or, take a bumper car ride over the icy banks!

Eat!  Especially if you’ve been in China for a while, it is a great treat to dine on some authentic Russian specialties at restaurants such as the Russia Cafe or the Tatoc.

The former (above photo) is often touted in guidebooks, and although we found the cozy interior charming, the food didn’t really live up to expectations.

The latter (below photo) has an amazing basement/cellar restaurant with full-on Tolstoy-esque decor, complete with vast, fixed menu Russian dinners.  We splurged on a 389 RMB fixed menu for two and had a great time of it.

Another favorite was also a guidebook (and basement) destination featuring d0-it-yourself spring rolls, across Zhongshan Dajie from the Russia Cafe called Lao Chang Chungbing (look for the small address plaque “180”).

They have an English menu where you pick rice or flour wraps, bean paste and then a variety of pork, vegetable and egg dishes to make your own spring rolls.  Cheap, fun and delicious.

Visit the St. Sophia Cathedral.  This is said to be Harbin’s most famous landmark and upon visiting, I can see why.  The 1907 Russian Orthodox cathedral structure itself is beautiful — and quite an unexpected thing to discover in China.

While I’m certainly no expert, it seems that the facade has been relatively well maintained, but the interior (after paying 20 RMB admission) was disappointing.  The once grandiose nave is more or less entirely gutted — including the ornate embellishments on the walls and ceiling.  What remains is a cavernous space filled with black and white photos displaying Harbin’s history. 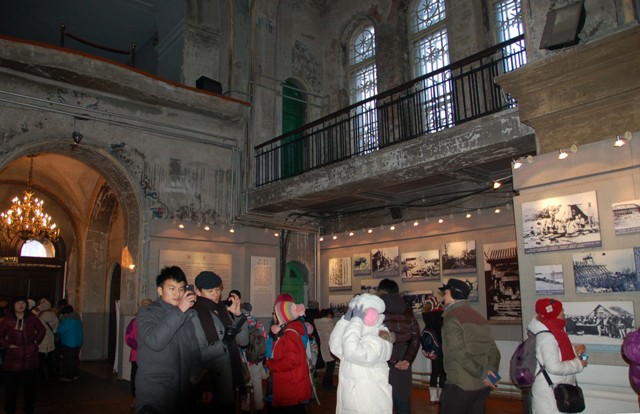 Other Historical Places of Worship: The Old Jewish Synagogue — a huge yellow structure with gorgeous Star of David windows built in 1909 — was closed under renovation when we visited, but we read that it normally houses a popular hostel and cafe.  Just down the road apiece, the old Turkish Mosque is also worth a photo or two, although it was closed to visitors as well.  Both are on Tongjiang Street.

Take a “Safari” at the Siberian Tiger Park.  This one, Sam and I both had mixed feelings about.  Firstly, it is a strange thing to visit the ice festival one evening and the next day find yourself in an armored van, snapping photos of Siberian tigers frolicking in the snow.

Since the park claims to be a conservation/breeding ground for the endangered Siberian Tiger, we felt okay with spending the entrance fee (100 RMB per person for entrance and “Safari”) to pay them a visit.  But, then you see these signs where live animals can be sold so that the tourist can watch a chicken or goat or even a cow being mauled in the open.  Very Roman Empire, you know?

Apparently, we were placed on a mini bus where no one paid for this extravagance — fine with us — but still, the knowledge of this option was a bit off-putting.  Also, once the safari is completed (which was not all that to be honest.  You climb into a mini-bus with about 30 other tourists and drive around in the snow while tigers roam about) you have a walking tour of all these tiny cages where animals such as cheetahs, lions, puma’s and other cats NOT intended for freezing weather — much less tiny confined cages — pace back and forth in agitation.

We suspect this park is actually more of a breeding ground for the much-touristed Liger (pretty much Napoleon Dynamite’s favorite animal, you know).  For real.  Apparently, the Liger is a cross between a male lion and a female tiger so that the Liger is larger than both.  They are sterile animals.  They are kept in small, solitary cages.  In the snow.

We both left feeling a little depressed.

Visit the Unit 731 Japanese Germ Warfare Experimental Base.  If I thought the Siberian Tiger Park was depressing … this upped the ante, but in a different way altogether.  Warning: Some of these pictures and descriptions may (and should be) disturbing.

The Unit 731 Japanese Germ Warfare Experimental Base — now a government run museum with free entrance (Electronic guide is 15 RMB) — is a bit out of the way to get to but entirely worth a visit, if for no other reason, than to gain a better understanding of the oft perplexing hostility Chinese nationals frequently exhibit toward their prominent neighbors to the east.  A passport will be required upon entrance, so be sure to bring yours.

When Sam and I lived in Germany, we once visited the Dachau Concentration Camp near Munich, and I think that experience comes closest to what we saw here.

Although the Unit 731 museum is still being developed and does not have all rooms on display to really give the visitor a good idea of what the place must have been like, it still shows enough of the inhumanity humans are capable of to bring tears to one’s eyes.

Basically, Unit 731 of the Imperial Japanese Army was the unit tasked with developing and deploying various forms of chemical and biological warfare against the defending Chinese during the Japanese Occupation of Manchuria from around 1936 to 1945.

Additionally, they conducted vicious human experiments and vivisection very similar to the stuff being conducted by Nazi “doctors”.   They experimented on Chinese civilians, adults and children, captured POW’s (including non Chinese), and other various people who they felt didn’t merit being treated like humans.  The victims were, in fact, called Marutas by their tormentors, which, according to the museum’s explanation, meant “logs.”  Apparently, this was a “humorous” reference to the fact that victims were disposed of in incinerators once done being victimized, or otherwise, chopped and experimented upon like so many hunks of wood.

Just to be clear before I go any further, I don’t think there is anything unique about German or Japanese people with regard to their capacity to act like monsters.  I think places like Dachau and this Unit 731 museum are an indictment of human beings everywhere.

But I also think the main value of preserving these historical sights of horror is not in order to point fingers at any nation such as Germany or Japan (or, for that matter, USA — who purportedly granted safe passage to perpetrators in exchange for classified research data), but rather to serve as a grave reminder and warning to all of us of just what we are all potentially capable of as a society.  Humans have great capacity for beauty and love and wonderful creativity, but we also have tremendous capacity for deep, deep evil.

Anyway, this museum documents various experiments perpetrated upon Chinese (and other) civilians and soldiers, such as induced frostbite followed by the chopping off of frozen limbs and other experimental methods of “defrosting”, the disembowelment of living children for use of various experiments, vacuum chambers where victims’ organs were sucked from their orifices while alive, rape or other methods to intentionally infect victims with diseases such as syphilis, the Bubonic plague, etc.

According to the museum, rats were even bred on site and infected with plague, then dropped into villages to intentionally infect on larger scales.  Also, the museum dedicated a considerable amount of its documentation toward recent disasters sustained by Chinese civilians as a result of accidentally discovering chemical weapons left and buried by the Japanese as they retreated from China.

Like I said, depressing.  But I think worth the trip.

Thus concludes our sites in Harbin.  I think out of all the things we saw, the Unit 731 museum made the most impact — which isn’t exactly a Pollyanna vacation moment — but I’m glad we went.

Potential Taxi Scam Alert:  We flagged a taxi from downtown Harbin and showed him where we wanted to go using our mini ipad map.

He charged us 60 RMB to get there, which is more than the meter fare called for (it clocked 52 RMB) but since it was removed from town, we thought the extra amount was fair enough.  He then offered to wait and return us to town for another 150 RMB.  We agreed, mostly because this place really is fairly removed and taxis were not a frequent site (though the public bus would have been an option).  We ended up staying at the museum probably 2 hours or so, which must have been more than the driver calculated because when he drove us back to town, he initially refused to give us our 50 RMB change for the 200 I paid him!  Sam then pulled out his smartphone and was attempting to use software to translate something along the lines of, “Look, we all agreed ahead of time that you would wait for us and this was the amount …” when the taxi driver suddenly smiled, laughed nervously and pulled out a 50 RMB note.  Apparently, he must have thought Sam was calling the police!

Getting there:  The Unit 731 Museum is about 30 kilometers southwest of Harbin, near the town of Pingfang.  Here is the name of the museum in Pinyin and Chinese characters:

To get there by bus,  it is suggested by some to catch the 338 from Harbin’s railway station to Pingfang, or to take the 342 bus from the post office on Tielu Jie (Railroad Street) and then get off at Xinjiang Dajie (Railroad Street), retrace the bus’s journey by foot for about 5 minutes until you see the museum on the left.  Personally, I think taking a taxi there is a good idea just because it is so removed.  For return, taking the bus would be much easier as Old Town Harbin is fairly easy to navigate, even if you do get lost along the way. Also, before you go, check the times.  Presently, the museum’s operating hours are strange, something like 8:30 to 11:30 and then 1:00 to 3:30, I believe. Make sure they are open on the day you are interested in going.

One thought on “Things to Do in Harbin, China”