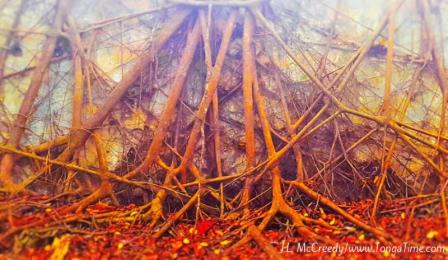 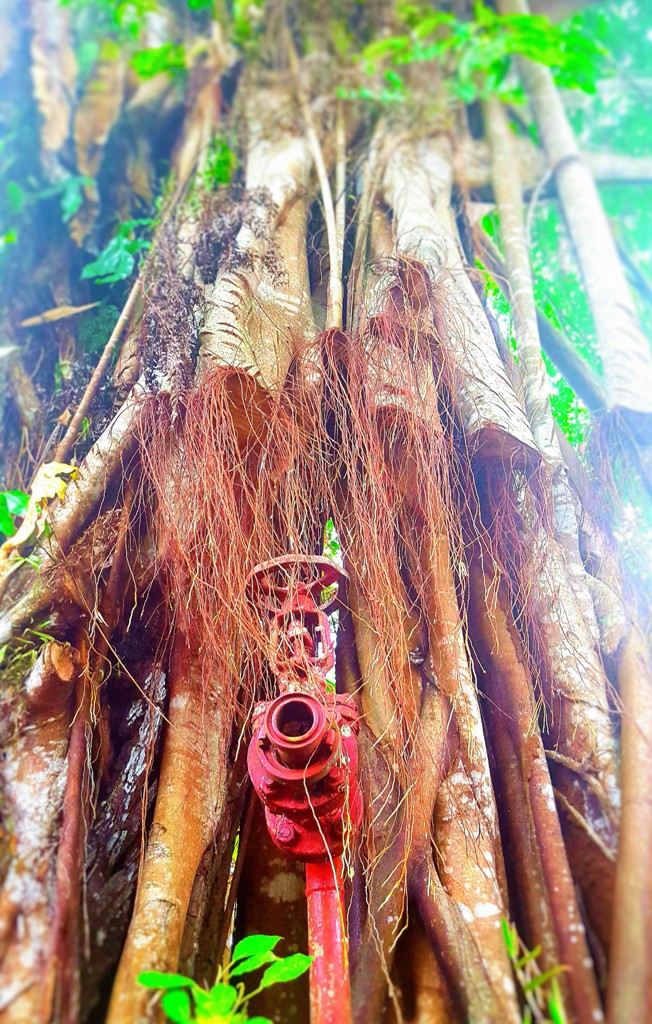 Indonesia has the world’s third largest tropical forest, after the Amazon and the Congo. And lucky us, we currently live in Kalimantan, a/k/a Borneo, where the rain forests cloister species still being discovered; currently our island — the third largest in the world — is home to a huge range of flora and fauna found nowhere else in the world! To wit, 44 species of mammals, 1000 plant species, 37 species of birds and 19 species of fish. All of these are endemic!

Sam and I didn’t discover any new species when we took a walk in the rain forest on Sunday, but we did stumble upon curious artifacts that made us feel like jungle explorers … for a few hours. You know, until we decided we were hungry and thirsty and wanted to return home for a hot shower. And AC. And homemade pizza. Just like old-school explorers….

But back to the rainforest:

Where we live, patches of forest still tangle on the edges of housing complexes in Balikpapan. Here, little paths twist off of the wide, asphalt roads that run like ribbons between large homes squatting on bluffs overlooking the sea. You never know what you’ll find when you follow those little trails, and on this Halloween weekend, we discovered all kinds of things weird and wonderful, like a cherry-red hydrant nestled in the roots of a banyan tree … or a neglected vinyl blue sofa. 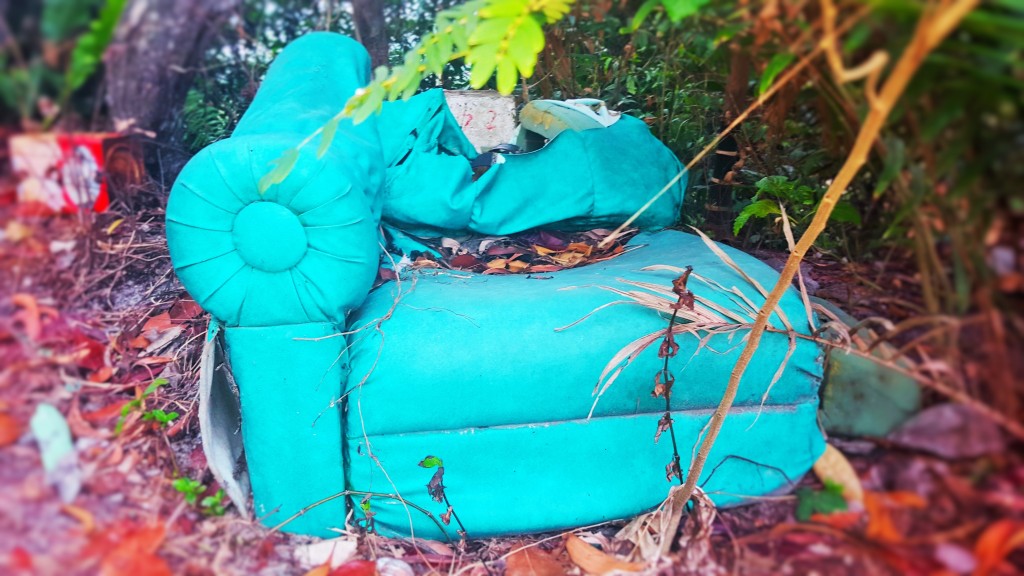 I love stuff like that: the unexpected. Things juxtaposed. Maybe I get unreasonably excited at photographing a blue sofa; if so, it was nothing to what Sam and I both felt when we discovered an abandoned bridge choked with vines, spanning a forest ravine. It was beautiful and creepy at the same time. It also looked sturdy enough to cross, if you walked on the pipe running along the base and gripped the wire fencing along the way. 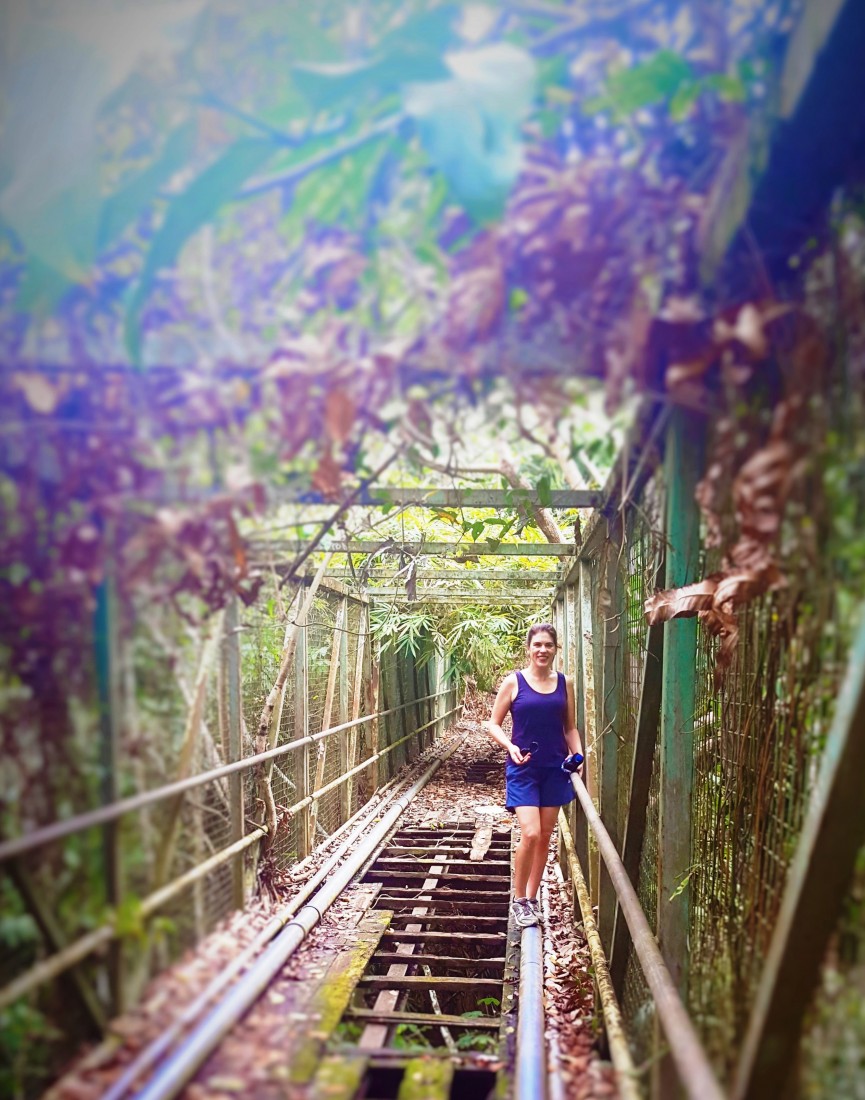 And even though the bridge felt in the middle of nowhere, we were surprised to discover that, on the other end, after crawling over and under a few felled logs, a concrete staircase led up to a house nestled in the Pertamina housing complex — Indonesia’s government oil company here in Balikpapan. 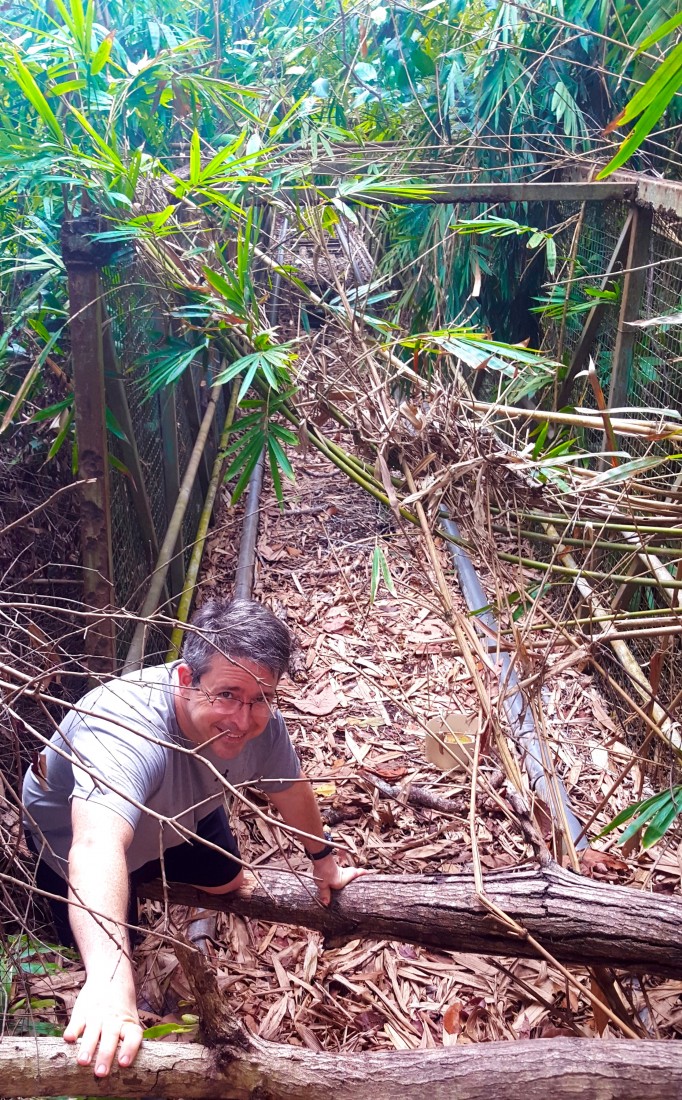 We were pretty excited at our bridge discovery, and were scratching our heads at having emerged once again within the tidy complex of Pertamina, when Sam spotted yet another trail leading into the forest. 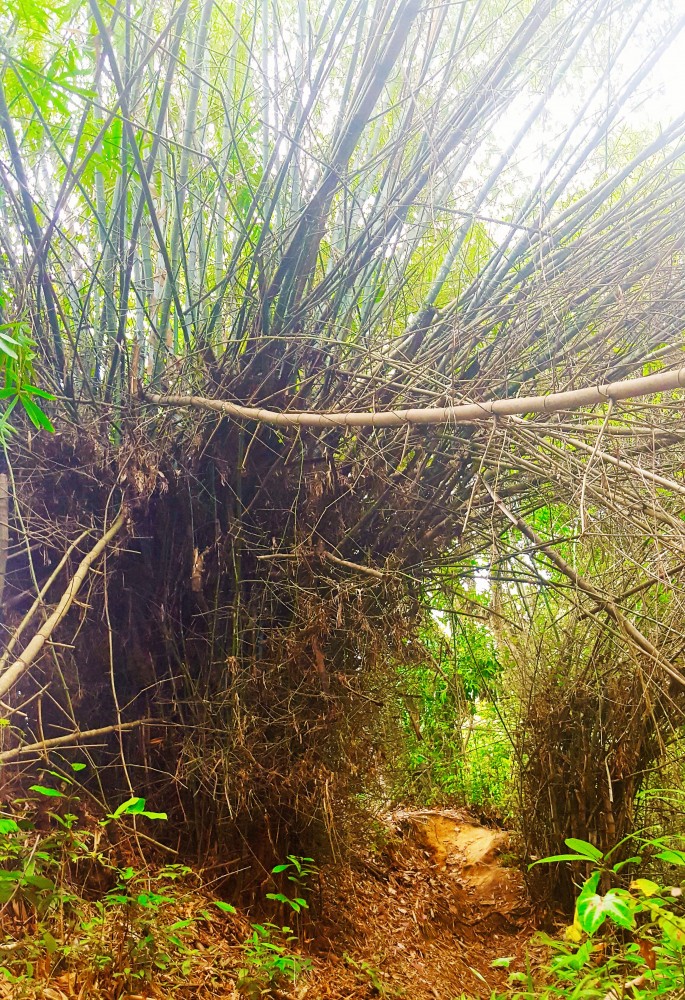 We followed, which eventually led us through a familiar patch of spidery bamboo limbs tilting over a well-used forest trail.

After a few more twists and turns, we found ourselves in an area we’d never before been, with an abandoned house sitting amongst overgrown vines, banyan roots and old-growth trees, like a modern bit of Angkor Wat, right in our own backyard! It was wonderful to photograph there; magical, even, with the light filtering through verdant leaves above, casting over pocked concrete and tree limbs snaking through long-forgotten walls and windows. Here are a few of our favorites, courtesy of my new, fancy-smancy Samsung Galaxy s6 phone: 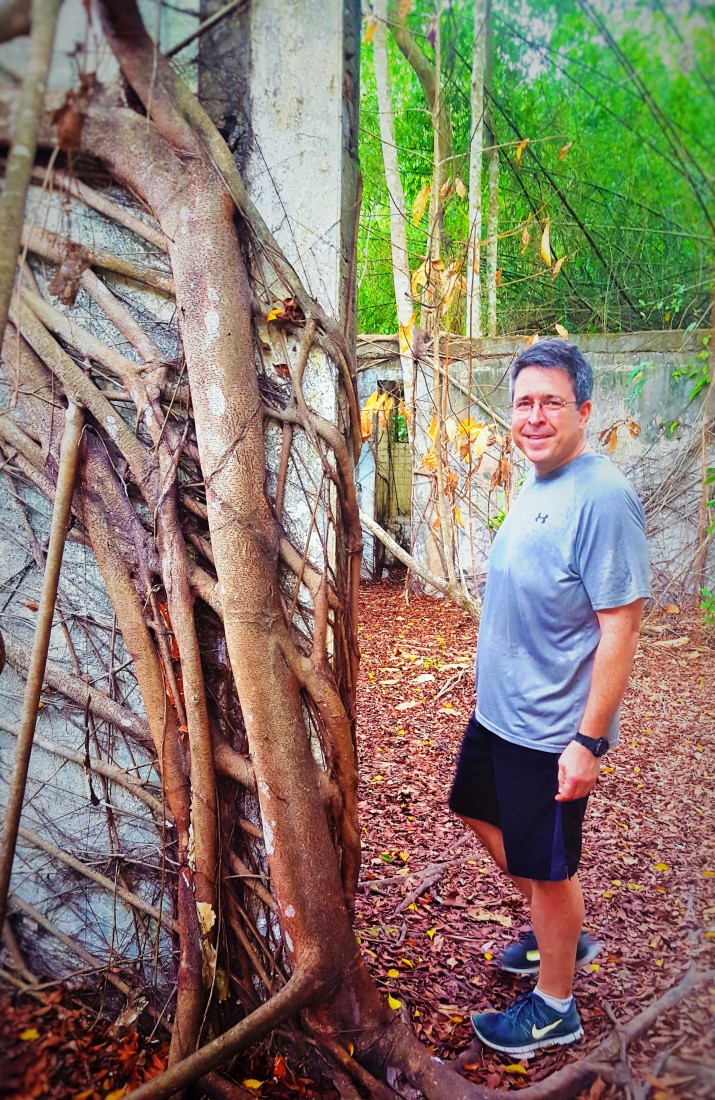 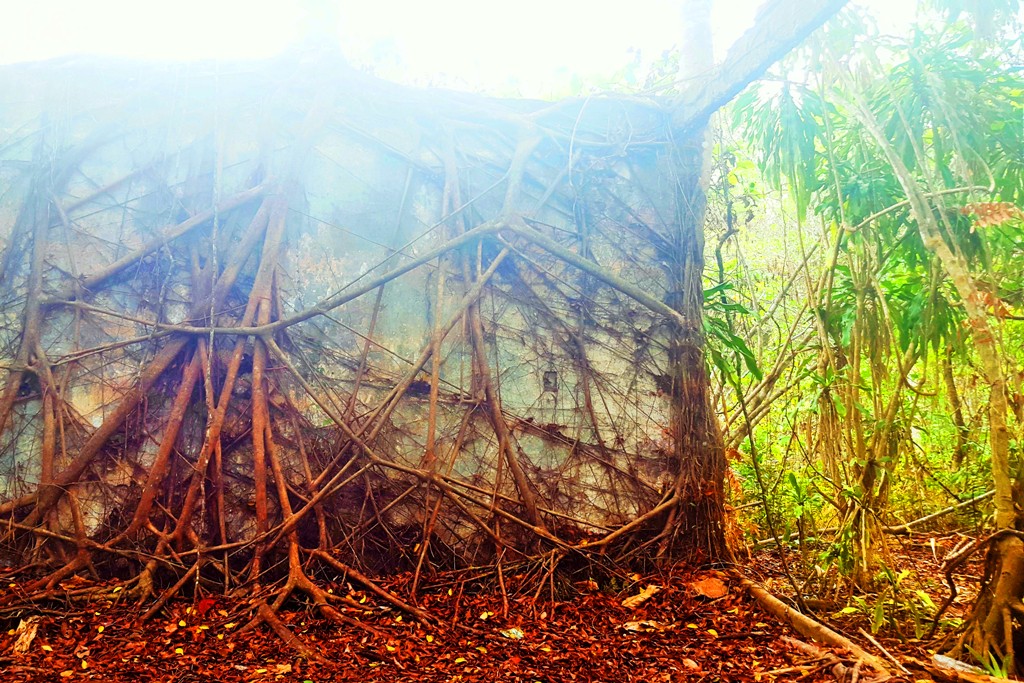 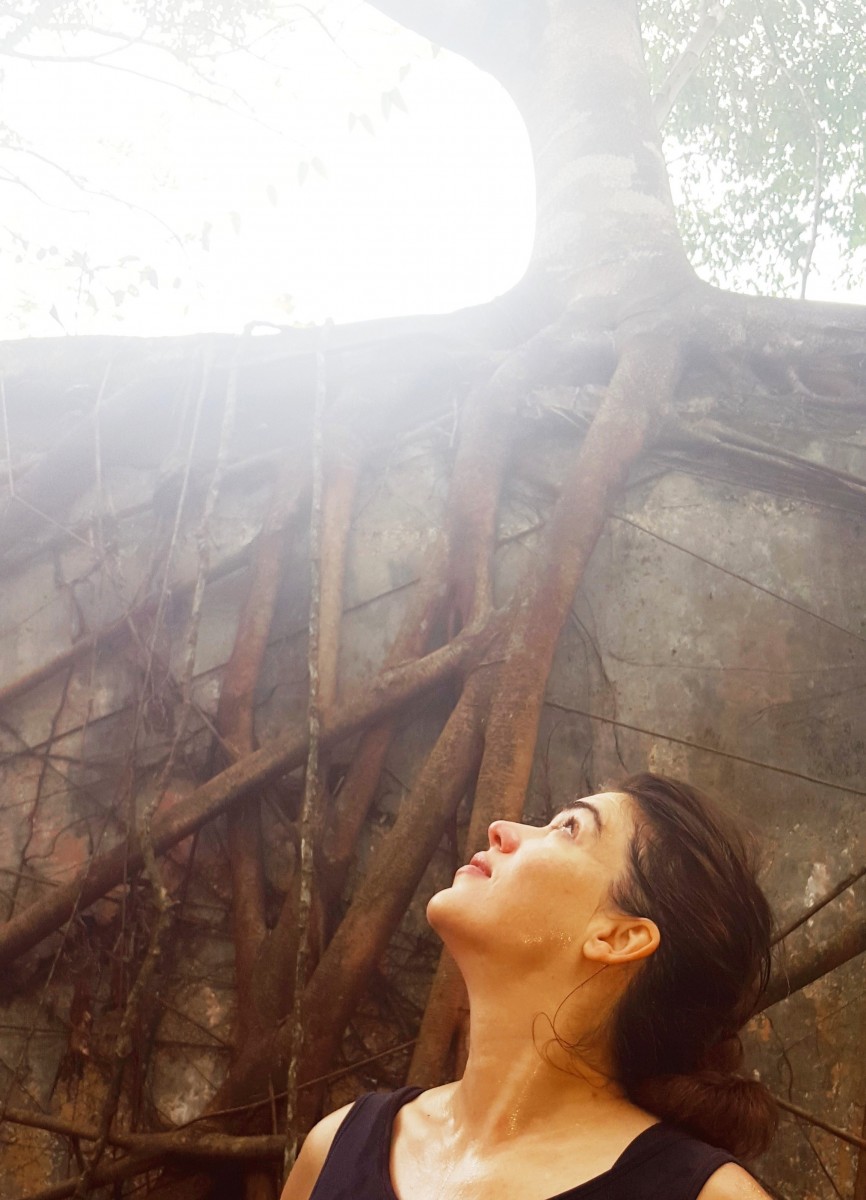 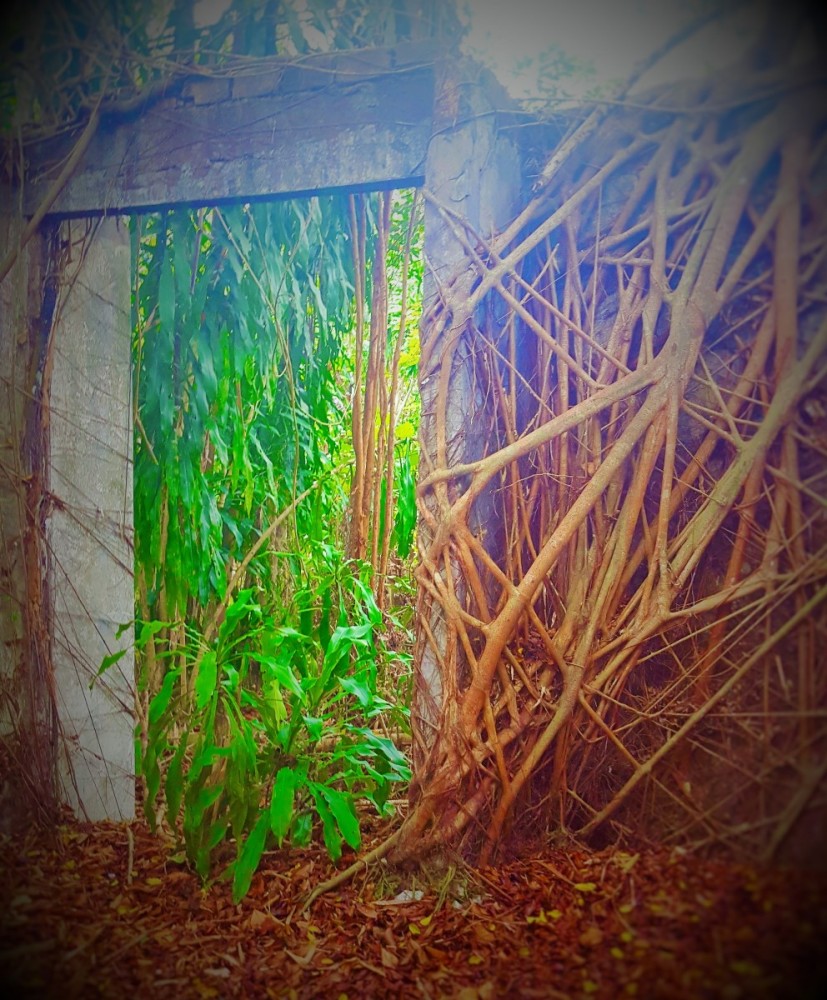 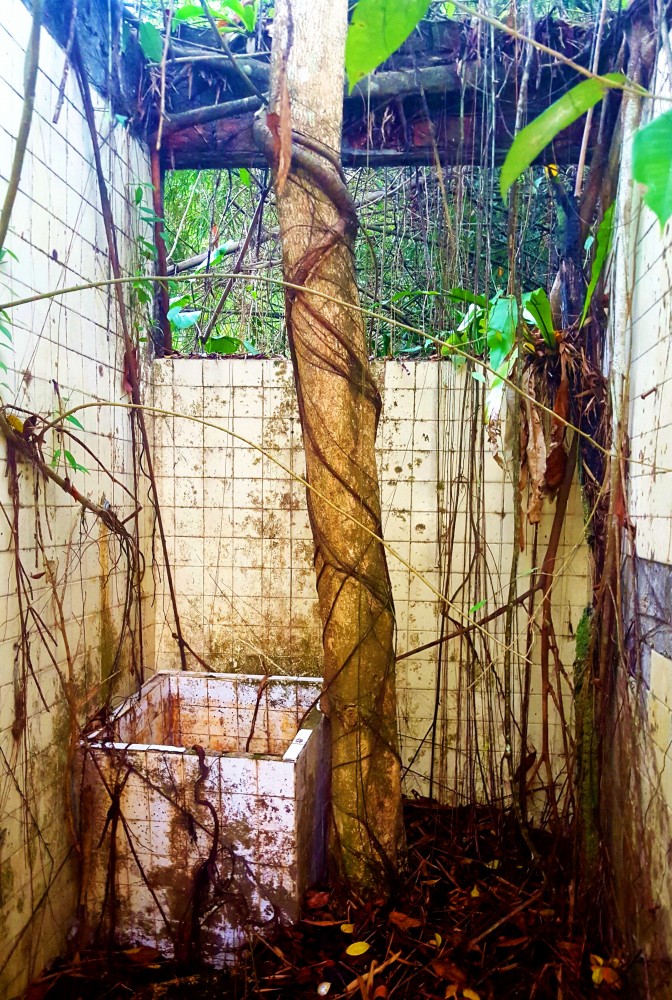