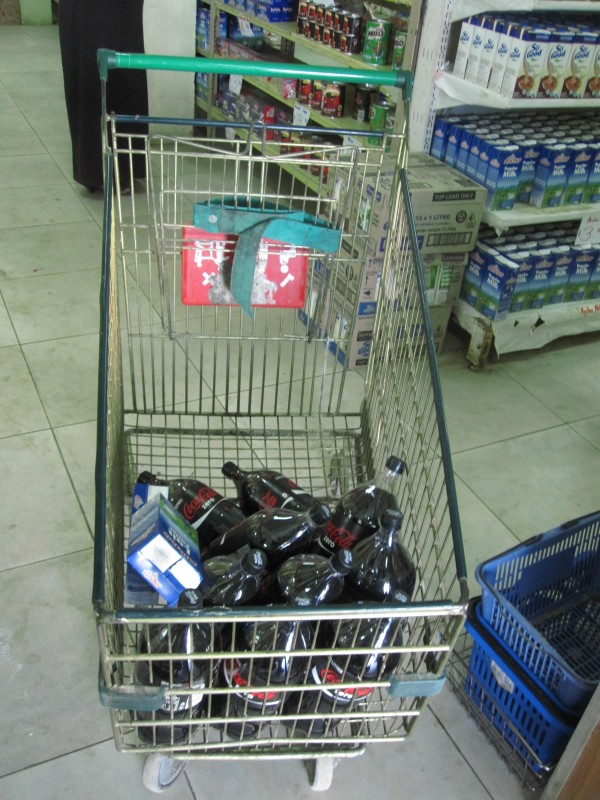 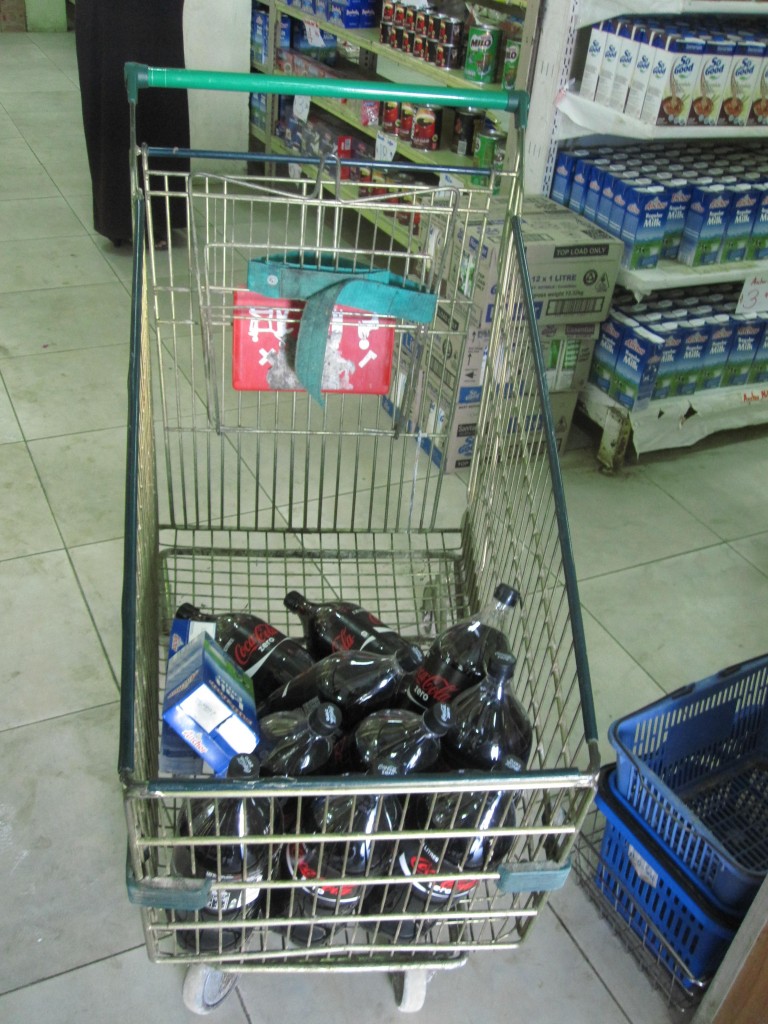 This is my grocery cart.

It may appear unexceptional enough, but under that bland exterior lurks a diabolical contraption bent on sabotaging my Coke Zero hoarding spree.

Sure, it goes into the store without any fuss, but once there, that ruse is discarded and replaced with a scheme to go forwards when I need to turn sideways, diagonally when I need to go backwards and backwards when I am literally standing in front, pulling at the carriage with all of my might.  It rolls when it is supposed to be stopped, crushing toes and invoking murmurs from indignant Tongan housewives who only want to get their flour and carton of eggs before the after-work rush sets in.

It is now barreling down an isle of tinned corned beef.  I take chase, ignoring the two school boys who snicker loudly behind me, and catch it just before it crashes into an un-cooled fridge filled with cuts of lamb.  I apologize and try to laugh it off, but no one seems to see the humor.  A few women glare at me, surely wondering what idiot has any need for twelve humungous bottles of Coke Zero at one time.  If I had any sense, I’d simply leave my cart and walk out of that store with what little dignity I have left. But I’m not going to do that.  Why?

Well, firstly, it’s because I know that no other cart out there in the forlorn jumble of malfunctioning carriages will work any better than this one.  It’s why everyone else is smart enough to bring a few family members and shop with baskets.  Secondly — and this is by far the most salient point — it’s because it’s Coke Zero.  And in Tonga, that stuff is gold.  And when a 2.25 liter bottle is being sold for a measly three Pa’anga, it’s upgraded to diamonds.

I’m grabbing the few provisions I need and heading now to the check out, my cart swiveling from side to side down the only wide isle of the store, causing patrons to dash and dodge about like a shopping version of Frogger.  I make it to the counter where the man tries not to giggle and loads most of my bottles into a floppy cardboard box with only three sides.  The two school boys behind me make it clear I’m in the way, so I have no choice now but to put that box back into my cart and make a run for the door.

The exercise in humiliation begins anew.

I manage to swivel between cars in the makeshift parking lot until I reach my tiny Mitsubishi Pajero Jr.  A lady sitting outside the store is hugely entertained and laughs and waves at my progress.  Sweat is beading at my temples as I fumble for my key and with one hand (because the other is grasping the handle of that cart), I unlock and open the back door.  The woman is calling to me now; I try to smile back, which only lasts a minute because the door has slammed shut on my hand.  So, I employ a foot, which isn’t very ladylike — even less so when you’re wearing a skirt.  But I’m desperate.  And that, I’ve learned, is what it takes to get things done sometimes.

I get in the car and weave between automobiles that are coming and going at random with no indication of their intended direction.  I make it to the road, only to slam on my brakes because the van in front of me has suddenly stopped and has no brake lights.  Bottles tumble behind me and I hear a sharp hiss come from a few caps.  That’s cool.  I’ll just drink those first.

I’m circumventing the van now — he’s stopped in the middle of the road and chatting with a chum sporting a wool scarf and ski cap, shorts, flip-flops and a t-shirt emblazoned with “Sexy Disco” in faded letters.

It’s Wednesday afternoon in Nuku’alofa.  I’ve got a box of radiated milk, a can of tuna and a jeep full of Coke Zero.

3 thoughts on “The Perils of Coke Zero Addiction”