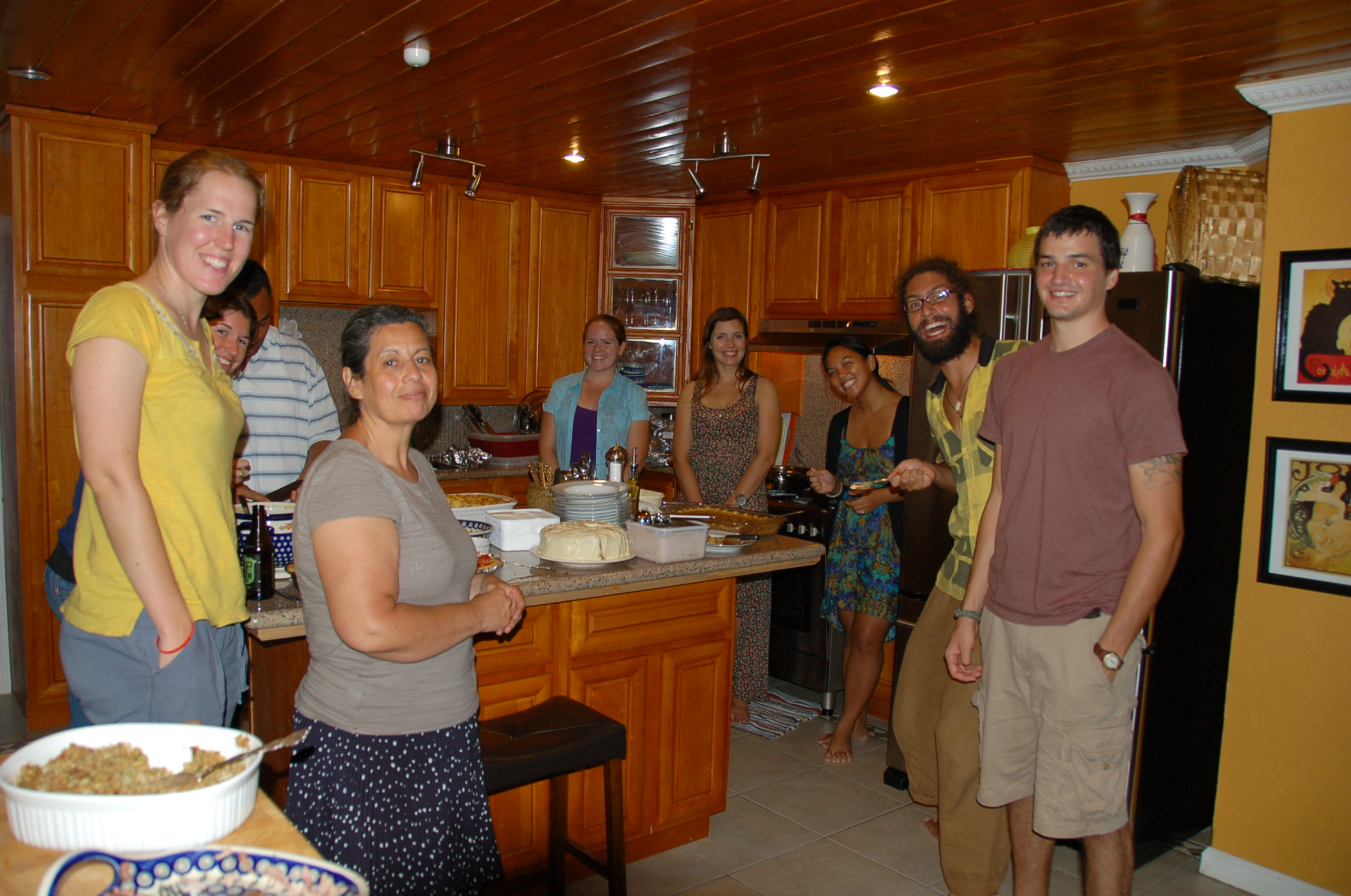 Thanksgiving is a big holiday for most Americans, but when you’re an American in Tonga, it gets even bigger.  For starters, that over-priced frozen turkey you speculate over at your local grocery store?  Well, it’s a sacred acquisition here.  If you’re lucky enough to spot one in Tonga, you abscond with it immediately, regardless of the expiration date and quadrupled cost.  You sneak it into your fridge and speak of it in hushed tones lest the throngs of homesick Americans rush your house with brooms and machetes.

Secondly, when you’re an American in Tonga, you realize how important it is to be around friends and family to celebrate the festivity.  After all, a turkey dinner just isn’t quite as fun when it’s just the two of you.  Which leads me to my last point:

Thirdly, when you’re an American in Tonga, what is considered a “meal” changes drastically.  None of that polite picking at food and the obligatory scoop here and there.  A mere teaspoon of cranberry sauce?  Ha!  In Tonga, everyone knows how to eat.

So, on that note, Sam and I decided we should invite all the Peace Corps folks who didn’t have other plans to share in our prized, frozen fowl come Thursday evening.  It was a last-minute kind of thing, probably because we didn’t know ourselves if we could score anything worth having a feast over, so the invite was text-ed on Tuesday morning.   By that evening, we had over 20 people planning to come.

Clearly, one turkey just wasn’t going to cut it.  And my peaceful Tuesday evening? Sayonara!

Now, our house is a strange, somewhat creepy kind of place.  I try to keep up the enormous interior,  but the exterior, I must admit, is more than I aspire to.  I used to, but every day birds, lizards, chickens and a few feral cats make visits about our domicile, and generally consider it their home, too.   It was a war of attrition that I soon lost.  I did train our adopted-dog-who-still-won’t-let-us-pet-her to stay off the porch, a moment of victory I still savor.  Anyway, back to the cleaning.

So our enormous house has dwellers on the inside as well, and I don’t mean Sam and me.  Somewhere in the dark, gloomy shadows within the walls and under the floorboards, lurks a tribe of super-spiders capable of casting cobwebs in a matter of seconds and leaving dried corpses of cockroaches in obscure corners, waiting for the hapless inhabitant (to wit, me) to encounter them with an unlucky bare foot.  It doesn’t matter how much I clean and spray and mop, there is always a dead cockroach somewhere and always a wisp of cobweb to incriminate my housekeeping.  And don’t even get me started on all the mold and even mushrooms — yes, you heard right — that sprout up in the most inappropriate of places!  So, with 20+ people coming, you can bet that Sam and I vacuumed and mopped and dusted and generally scoured the house with toxic cleaning products from top to bottom!  By the time we collapsed into bed that night, you could have eaten off those floors for less germs than a take-out box.  Which probably isn’t saying much for here, but I digress.

Come Wednesday, I scrambled into town for last-minute additions.  I’m glad I did because I found 2 more turkeys at the Melie Mei Langi store — way cheaper than the one I bought days earlier at Molisi, albeit somewhat smaller.  Sam scrubbed our funky, bird-and-gecko-poop riddled porch until it sparkled and even vacuumed our car for the few volunteers who might need a ride home after the feast.  Yay!  I’d been wanting that to happen for months!  Our dog, Ibu, was a little freaked out from all the chaos and hid deep under the porch with her three new puppies, as if she did not know what to make of this activity called “cleaning.”

By late Wednesday afternoon, three turkeys thawed in the fridge, two large loaves of whole-wheat and herb bread baked in the oven, a huge container of stuffing steamed on the stove top (oh, fine, I cheated on that and used some stuffing mix I found at — appropriately enough — the “USA Store”) and a 16 x 10 x 4-inch casserole of homemade mac and cheese bubbled in the oven.  That done, I broke out my prized box of cream cheese and whipped it into a homemade cheesecake.  Oh, and I made an apple pie and carrot cake, all from scratch!  Sam “helped” with the frosting.  No, he really did (between eating half of it), and all in all, we were feeling pretty good about our progress!  It really helped that Amy offered to make the pumpkin pie, and I have to say, a cooler pumpkin pie could not exist.  Made from local pumpkins and homemade crust, our enterprising friend realized she did not have a pie pan to actually bake it in!  No worries, she folded that sucker into a rectangular baking dish and, voila!  A pumpkin pie that defies π itself!  And it was delicious.

Thursday involved more scrambling because 25 potatoes where peeled, boiled and whipped into mash (I had to use a few mixing bowls, just to get to them all!), a few kilos of green beans and carrots were prepped for steaming and an enormous salad was underway, which reminded once again how many things I took for granted in the states.  There, a salad is simply a matter of hopping on your bike and grabbing a few bags of pre-mixed greens from your local grocery, ready to dump into that wooden bowl.  Here, a salad involves buying freshly picked lettuce, carrots, cucumbers etc., soaking same in diluted bleach solution to kill of the invisible patina of what, I probably don’t want to know, rinsing and drying, etc., until you realize that your simple bowl of salad actually took a couple of hours to prepare!

Another item I used to take for granted?  Drinking water from the tap.  I realized at around 3 or so on Thursday afternoon that we didn’t have any ice to cool down the gallons of tea and lemonade I’d made.  We have a water cooler, but it didn’t have enough water in it for all of the drinks, so I’d made my tea and lemonade from boiled water which simply didn’t have time to cool, much less be chilled!  I remembered someone telling us about a place you could buy crushed ice, so I grabbed my picnic cooler bag and rumbled off to “Cool Fresh” at Small Industries, which, by the way, looks anything but industrious.  Abandoned might be a better descriptor, but that would be misleading as well, because the complex, despite the appearance of slow decay, is actually in full use.  Well, I asked around until I found the right building and sauntered through the broken, one-hinged door into an office where two cheerful ladies were snacking.  I asked if I could buy some ice.  They looked surprised, but said yes.  Five Pa’anga.  I slapped down my money and took the tiny key.

“You have someone to help?”

“You should have brought some help,” was their reply as they pointed out the door and around the corner.  I decided I’d better not ask questions.  I headed back outside in the direction they had indicated and discovered a stand-alone warehouse-looking thing with a padlock chain wrapped around the door to keep it closed.  Aha!  Hence, the lock.  I unlocked the padlock, which was so flimsy I could have probably twisted it with my fingers, and stepped into a giant cooler with slush oozing from the ceiling.  Apparently, the un-close-able door had had in impact on the ice making, because only a few patches of ice lay here and there on the well-trampled floor, but otherwise, the chamber was nothing but a vast void of cool, wet air.  A giant shovel lay in the corner, so I began scooping up the slurpy, somewhat brown colored ice into my cooler bag until it was full, which is harder to do than one might think.  That done, I headed back outside, but try as I might, I could not get that silly padlock to close again,so I had to return the key with a sheepish admission of having broken their lock somewhere in the unlocking process.  They didn’t seem to mind, and cheerfully wished me good-day with obvious admiration in their voices at my having commandeered their slurpy ice all by my lonesome.

I head back home and decide to use the ice to simply pour into giant bowls which would then be used to chill my drink containers.  This looked like a promising plan until I turned the corner of our kitchen and found Sam unwittingly scooping the ice (the top part of my cooler bag actually did look perfectly clean) into one of my lemonade pitchers.

Out went that batch of lemonade, but since I had horded seven cans of crystal lite, it wasn’t such a big deal.

By around 5 or so, our guests began to arrive, with more food, mind you!  Green bean casserole!  More apple pie!  Cranberry Sauce!  Ice cream!  Fresh fruit!  Soon, we had a kitchen stuffed with more dishes than we knew what to do with, and I was jamming one of the turkeys into the microwave because, despite 4 hours of baking 8-pound turkeys at 350 F, two of them still weren’t totally baked!  Clearly, things were not operating as intended, but hey, at least I have an oven and a microwave.

But everything ended up being delicious and Sam and I felt so lucky to spend Thanksgiving with everyone.  We even got to meet some of the volunteers’ better-half’s whom we’d never met before.  In a way, it felt more like Thanksgiving than others from our past.  Because here we all were: a group of people hailing from diverse regions, with different cultures, different religions, different ways of doing pretty much everything.  But we all came together on this day, happy for the shared experience of devouring turkey on a remote little island.  We all took turns saying what we were thankful for, and by the end of the night, as everyone left, I looked around and realized it was one of the best thanksgivings I’ve ever had.

Now, if I can just get over the fact that I let the entire occasion go by without ever realizing there were MUSHROOMS growing just under my sink cabinet — in full view, mind you — I’d say it was a complete success.  Eck!  So gross!  I was mortified for hours.  But I’m sure, somewhere on Tongatapu, there are at least one or two volunteers who did notice but were too polite to say anything, who now have one more thing to be thankful for: having passed through the weekend with their stomachs intact!

2 thoughts on “Thanksgiving in Tonga”