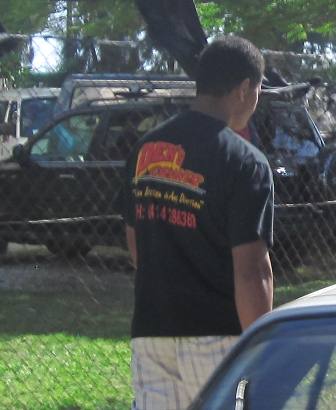 So the “Sexy Disco” t-shirt from the other day gladdened my heart so much that I had an idea.  I should document all of those awesome, hilarious or otherwise noteworthy Tonga T-shirts that are sported as regular wear here in the Big Pineapple.  If I can get a picture of them, I’ll post them here.  But if I can’t, I’ll do my best to paint the picture.  Today’s Parliament Parade proved an embarrassment of riches. 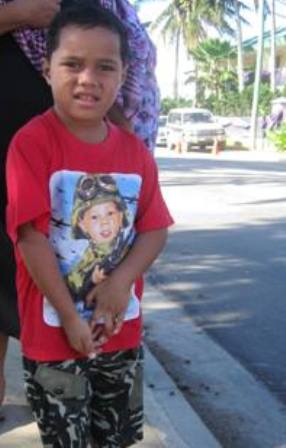 1.  First up, and more puzzling than funny, was this dapper dude at the parade today, cute little kid.  Ah, the innocence.  But then, he turns to pose for me and … this!  Is it just me, or is that whole scenario really confusing?

2.  Second contender was a gentleman swaggering about town in a shirt featuring a large martini glass (alas, no picture for this one).  Alongside that quaff were the words, “Not Tonight, Ladies.  I’m Here, Getting Drunk.”

Okay, so it’s not just fold-over funny, but it does make you pause to question: who makes this stuff?  I mean, somewhere out there in the bustling world of creative geniuses, there’s a designer and an entrepreneur thinking, “oooh.  That’ll be awesome!”  Who are you people?

3.  Finally, for today’s t-shirt contest, is the man featured here, back turned, walking away.  You can’t really tell what that shirt says, I know.  I tried to get a better shot, but he just glared at me and made it clear I had best desist.  So, please allow me to translate.  What you are viewing on that man’s back is the Queen’s English, extolling the virtues of one enterprising construction company, specifically, “Devil’s Cranes: An Erection in Any Direction.” 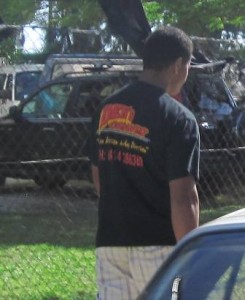