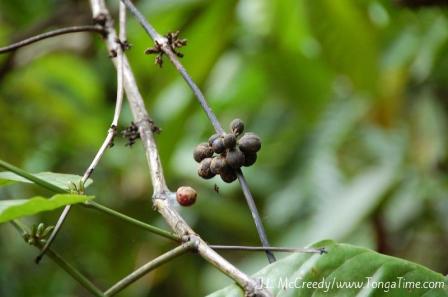 A little bit of magic happened to us a few weeks ago when we stumbled upon a home based Bali coffee factory.

Some of the best memories in life come from random, unexpected experiences. Am I right? It isn’t that planned activities can’t lead to great joy, but here’s the thing: you planned for it to make you happy, thus perhaps making the actual experience a little less piquant. You still dig it, but you’re supposed to. You expected it.

But when you just stumble upon something, or follow a path because curiosity dictates; when that kid in you wants to see what’s still around the corner even though the grumpy adult just wants to finish already and do something comfortable, that’s when the magic happens.

…Or you get eaten by a lion.

Here’s our story of how we shared an amazing tour of his family’s coffee-making factory!

It was already five or so in the afternoon, and  we were looking forward to cleaning up and sitting on our home stay balcony to take in the view after a hike back from the Melanting Waterfall in Munduk, Bali. (And that view is amazing; see here if you don’t believe me!)

But then, as we followed the narrow concrete path twisting through homes and clove, coffee and cocoa trees, we saw a tiny, cardboard sign that said, “Coffee.”

Well, considering no less than the Nectar of the Gods was being advertised in the middle of nowhere, we had little choice but to stop. There was no stall or cafe to be seen, but there was a concrete incline, followed by a set of steps spiraling to a curtilage (of sorts) above us.

Now, this sign for coffee probably held more sway over both of us because the sign did not advertise something that has become so ubiquitous in Indonesia that it is just plain silly. I am speaking of the over-touted (and of dubious authentication) Luwak coffee (you know, the stuff eaten, then excreted by civets, made famous by Morgan Freeman and Jack Nickolson in the Bucket List?). Luwak coffee is sold everywhere here now; there are even coffee shops and coffee brands going by the name, while in places like Bali, several “Agro” farms claim to harvest it au naturaul with miserable looking civets crawling about in cages. I digress, but suffice it to say, to see a luwak-less, old school, plane ol’ Bali coffee factory was a refreshing change. 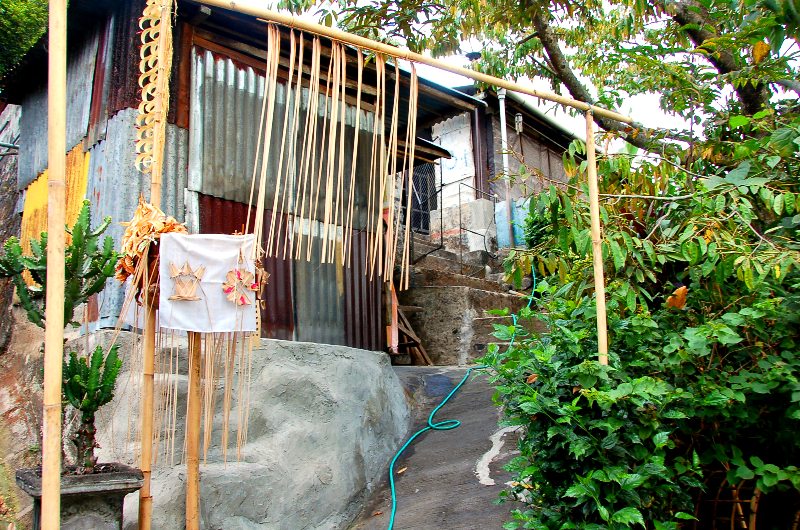 We hike up the stairs, then peer around the open area surrounded by small buildings and an unenclosed shed. A boy appears. Then a woman nursing a baby. An elderly man bent over a machine in the open-air shed straightens his back and turns to us. Another man, younger than the first, pauses near some bags of cement.

We exchange some awkward glances. Then I nervously explain in my best Bahasa that we thought this was a coffee place.

The boy’s face lights up.

“You want to see coffee?” he asks. His eyes are alert, wide and super bright. And he has this amazing, sweet, open smile.

He grins, then saunters toward the steps. “My name is Made,” he announces (pronounced ‘Ma-day’), swinging his arms as he walks. He turns beside a small building perched precariously over the concrete stairway, and leads us to another building just behind it. ‘This is where we make Bali coffee.” 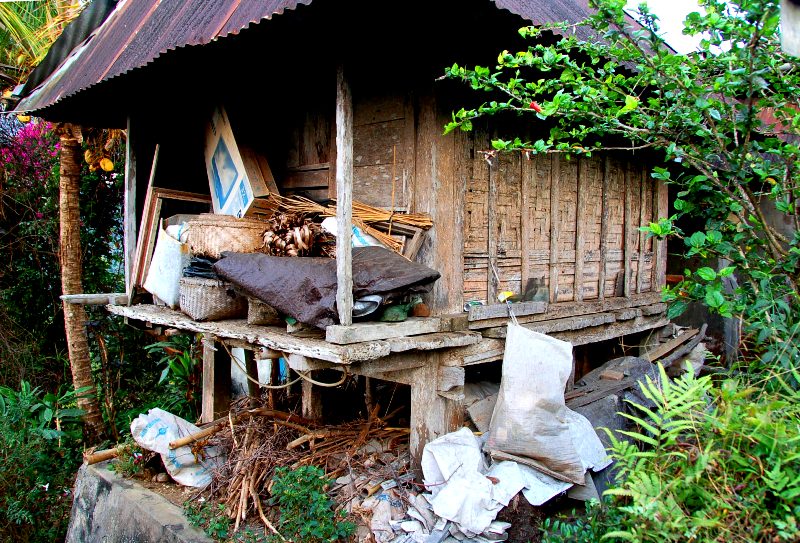 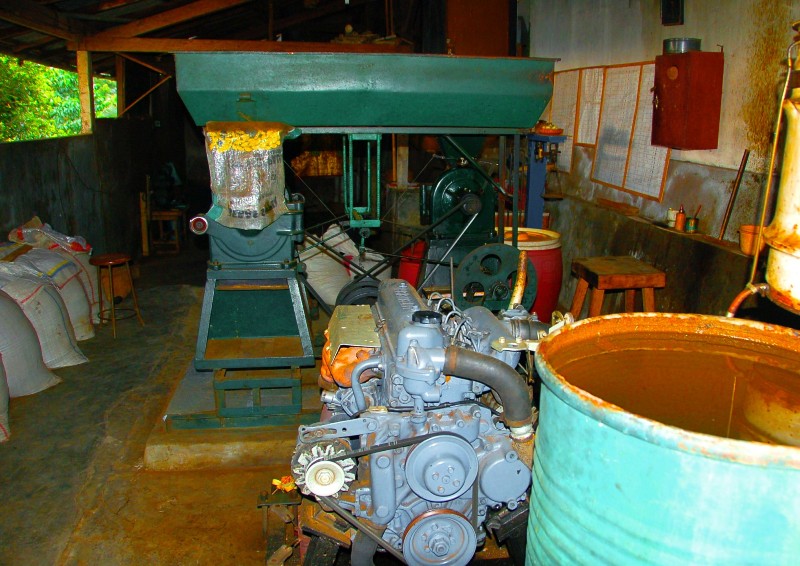 Impromptu tour of the coffee-making process

Made then proceeds to walk us through the process, starting with the bags of dried and husked coffee beans (“Kopi” in Bahasa). Turns out, his grandfather, Pak Beni, makes and repairs machines to process all kinds of agricultural products (which was what he was doing when we marched into their household area), including rice and coffee. The coffee husking machine is out in the field, they explain, but they show us a rice machine that performs a similar husking process. Here’s how it works:

1. Pick and dry the coffee cherries

First, coffee cherries are picked from trees growing in the surrounding area, then placed in the sun to dry for two weeks. Pak Beni explains that the longer the cherries dry, the more the beans soak up the flavor from the skin. That’s what makes Bali coffee so tasty! 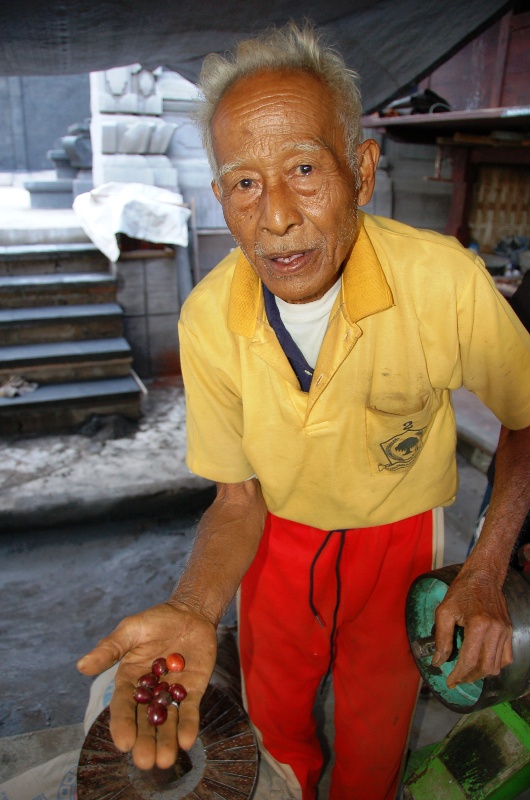 Once the cherries are properly dried, Pak Beni pours them into a machine similar to one below, where a wheel like the one he is holding sloughs off the dried skin, leaving behind the fresh, raw coffee beans. 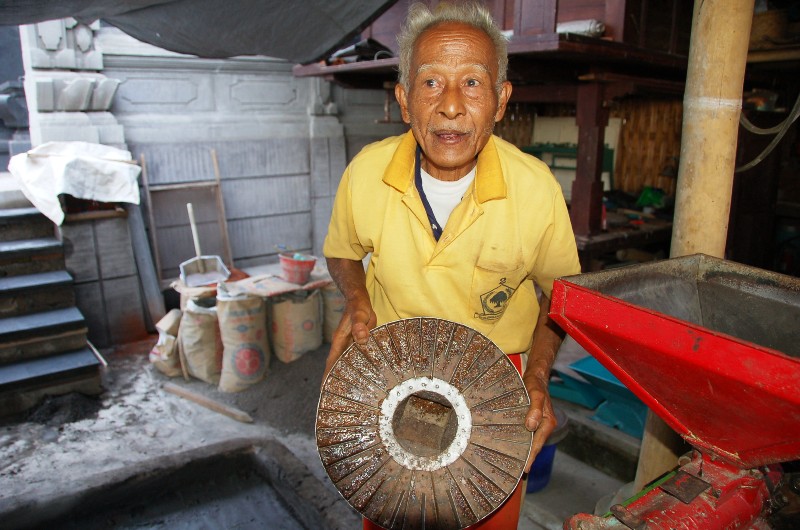 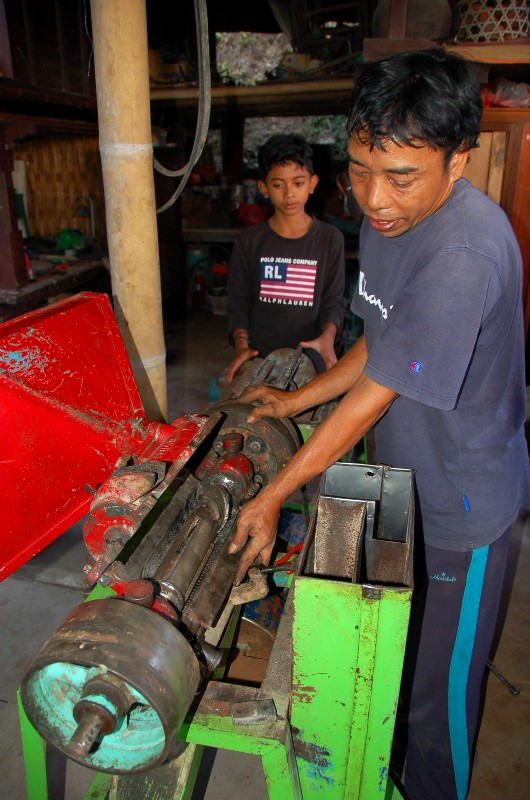 So far, so good. Even a little impressive, right?

But here’s the zinger:

Pak Beni made this machine — as he has many like it. He made the wheel. He made the concrete family temple still in process behind him. He does all this, repairs machines for others on the side, and still finds time to process coffee and peppercorns for the family business!  Oh, and in the middle of explaining all of this, he suddenly stops, smiles apologetically, and asks us if we would like some tea! (we decline)

But on to the process….

Once the beans are husked, they are brought to the room Made originally led us to and roasted for about four hours. The picture below shows Made holding the green coffee beans, while behind him (featured in the photo below Made) the bean roaster sits. 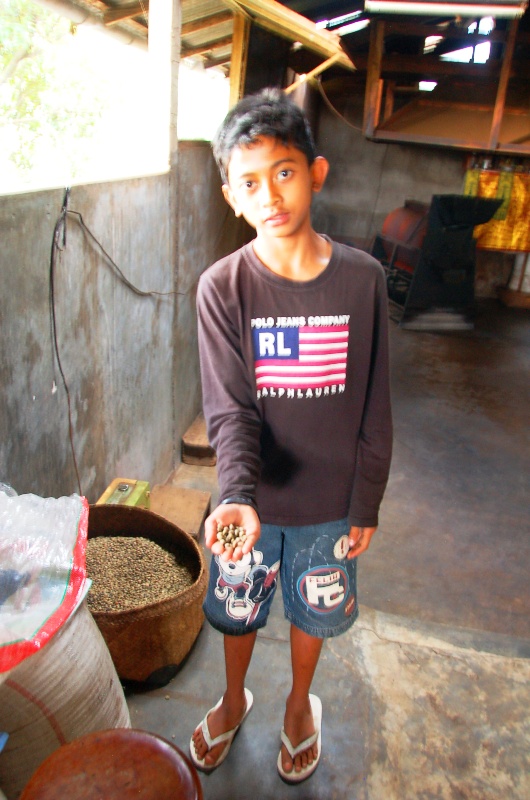 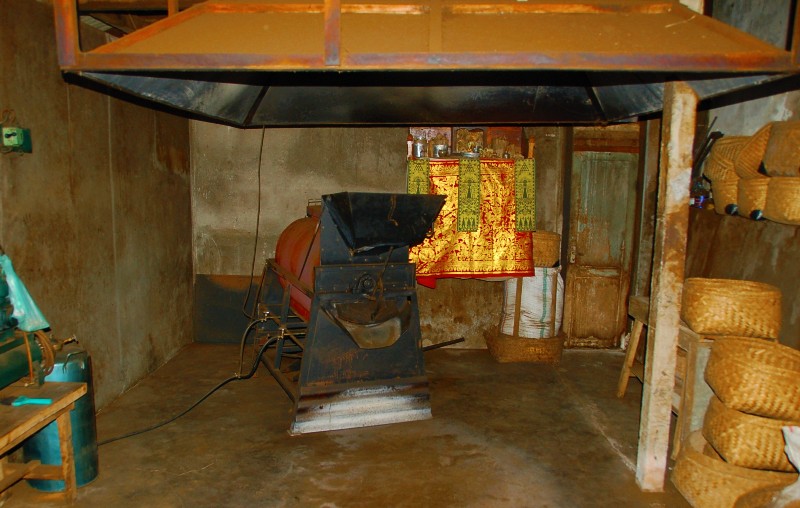 “Hey, what’s your name?” Made suddenly asks as he holds the green coffee beans. We tell him. He smiles, then reaches out to shake our hands. The perfect businessman. Affable but direct and efficient. And he really knows his stuff. I ask him how old he is.

“Twelve,” he says. Then eagerly adds: “You want to see how the beans are ground?”

We laugh and say yes, so he hops from the bean bag, over to another machine where the freshly roasted coffee beans are ground into fine powder. This takes about an hour per batch, he explains. The photo below shows the grinder opened up, where Made displays the powder within, some of which he scrapes off into his hand (the whole roasted beans are loaded into the trough just above his head). The brown bag below the grinder is where the finished product is channeled. 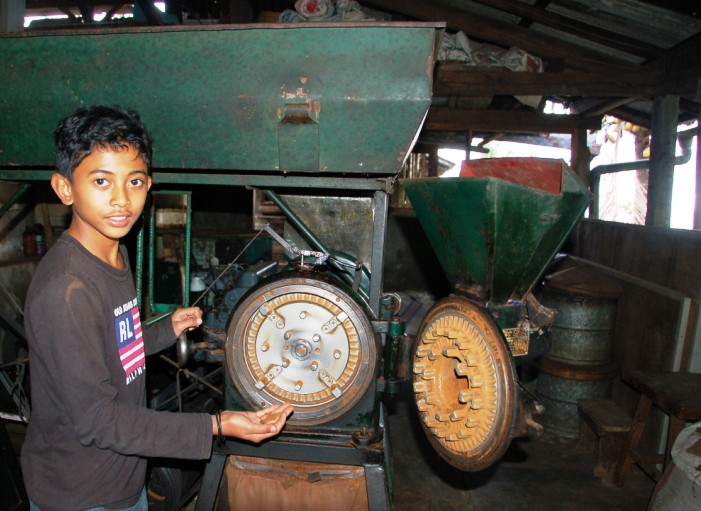 Sam asks Made what they use to power all of the machines, as there is no installed electricity to be seen in the building.

“This!” says Made, leading us to a four-cylinder car engine toward the entrance of the room that serves as the generator! He shows us the barrel of water used to cool the engine, then points to the white tank on the wall above, where fuel is fed into it. Sam’s impressed. It’s about as off the grid as one can get, short of harnessing your own solar or hydroelectric power, I suppose…. 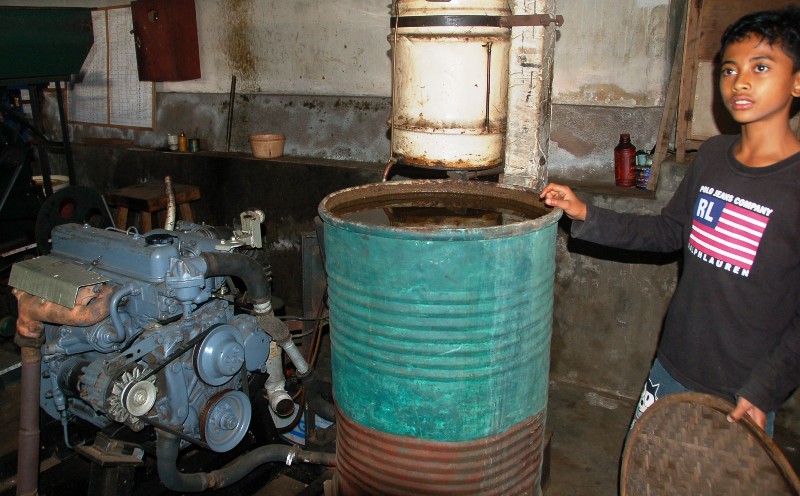 We chat some more with Made and his family in the open shed area, where Pak Beni shows us his peppercorn (“Merica” or “Lada” in Bahasa) plants growing in the courtyard.

Harvesting white and green peppercorns at the Bali coffee factory 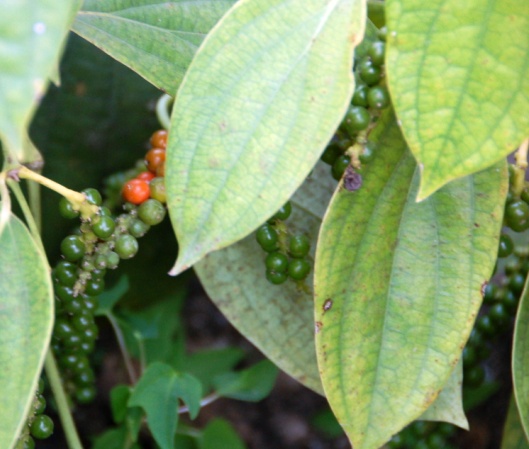 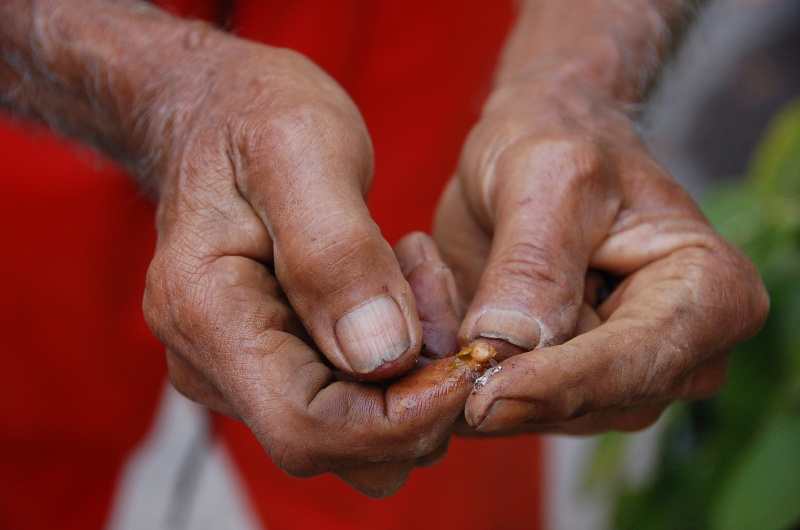 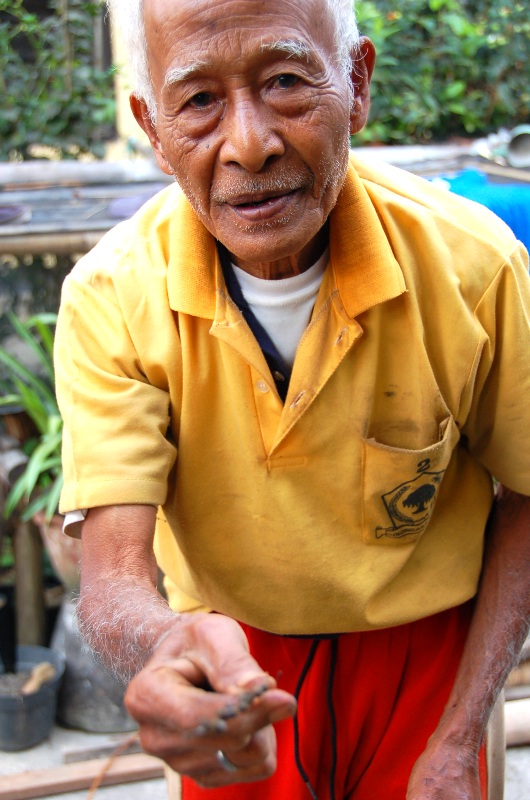 I forgot to ask how much their peppercorn products go for, but they said that they sell their Bali coffee to local shops for 50,000 Rupiah per kilo (2.2 pounds). That’s less than 4 USD. For a kilo! That’s a lot of work for 4 USD, and when I popped into a shop in town later that evening, I noticed one-kilo bags of coffee on the shelf, going for 150,000 Rupiah. Somebody’s definitely making a profit, but I don’t think it’s Made’s family.

I would say we spent thirty or so minutes visiting with Made and his family, and their hospitality and generosity of time and information touched us deeply. Actually, it was more than that; it was inspiring. Made and his amazing grandfather Pak Beni were so into everything they did. They didn’t mind the fact that a couple of sweaty tourists just bumbled their way into the middle of their family courtyard. They didn’t expect anything in return. In fact, they offered us tea instead.

Thank you, Made and Pak Beni, for showing us how it’s done!