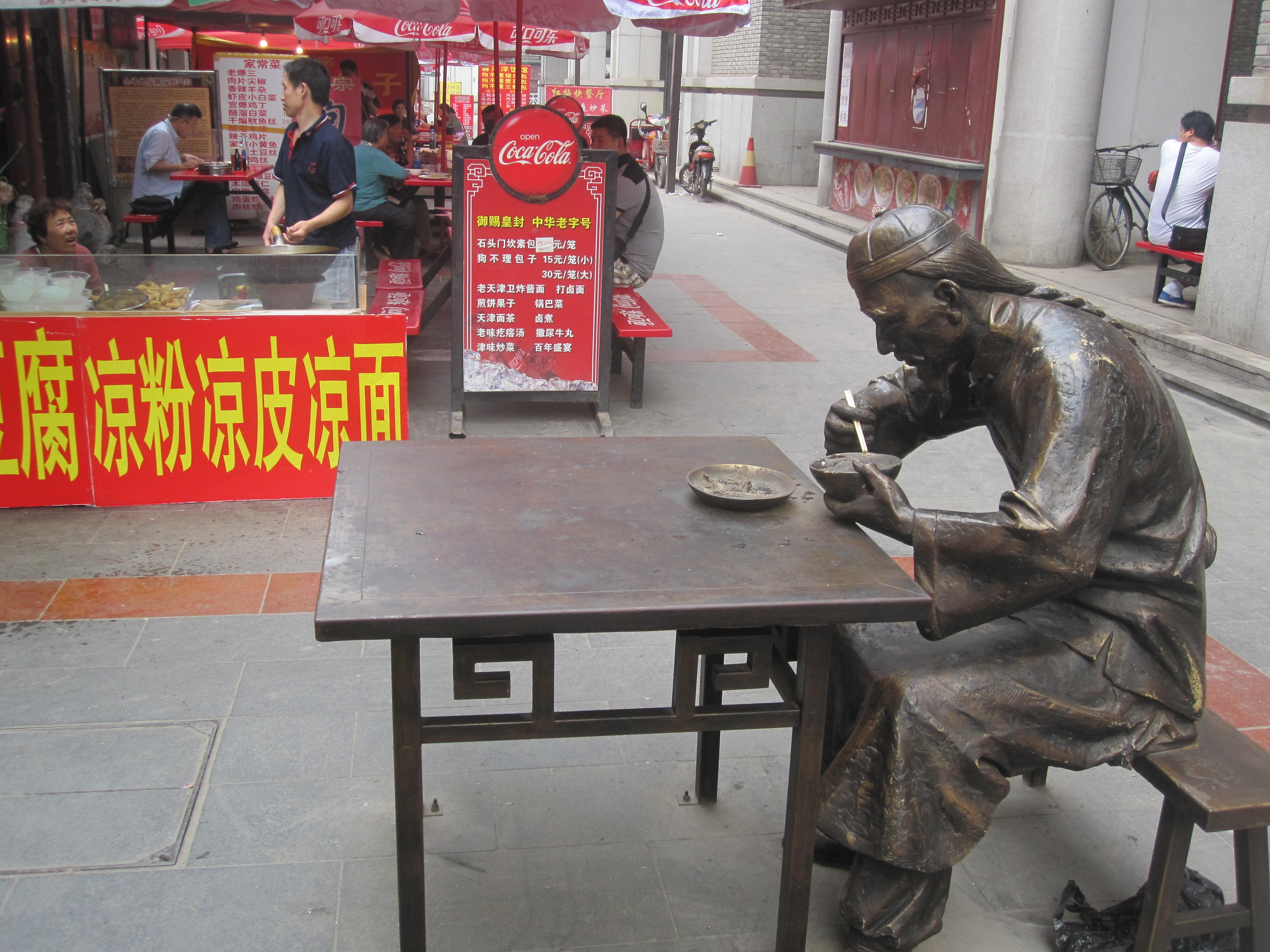 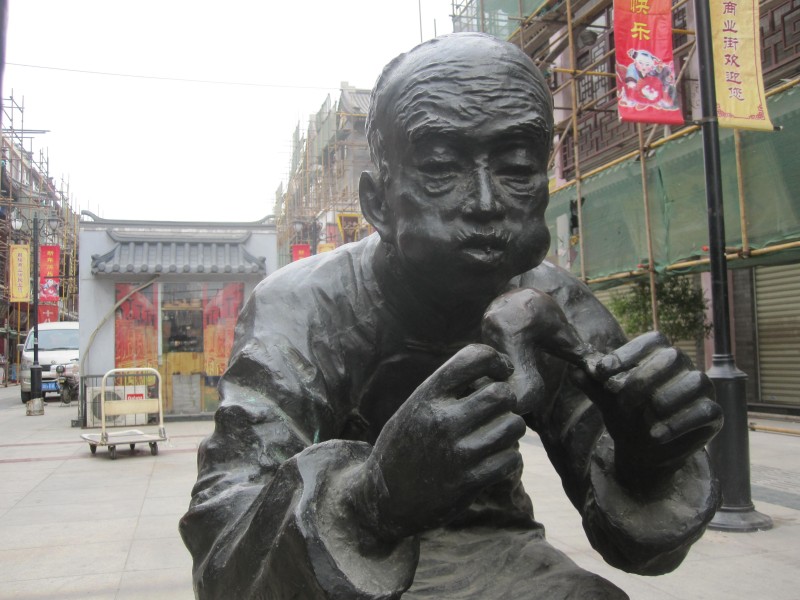 And the beauty of snacking around Tianjin is that, even if something isn’t so great, it usually costs no more than a dollar or two USD.  So why not try it?  Of course, unless you’ve a stomach of iron, it’s always best to sample freshly cooked items.

The only real hindrance to gastronomical adventures here is my woeful non-command of the Chinese written word.  Many local restaurants only have menus written in Chinese characters with no pictures or even Pinyin to attempt translation.  Solution?  Street food!  All you have to do is point at whatever is being cooked and voila!  You’ve got yourself a (usually) tasty treat!

So here are some Tianjin street food items we’ve thus far sampled, along with their Chinese names in Pinyin, if I know them. 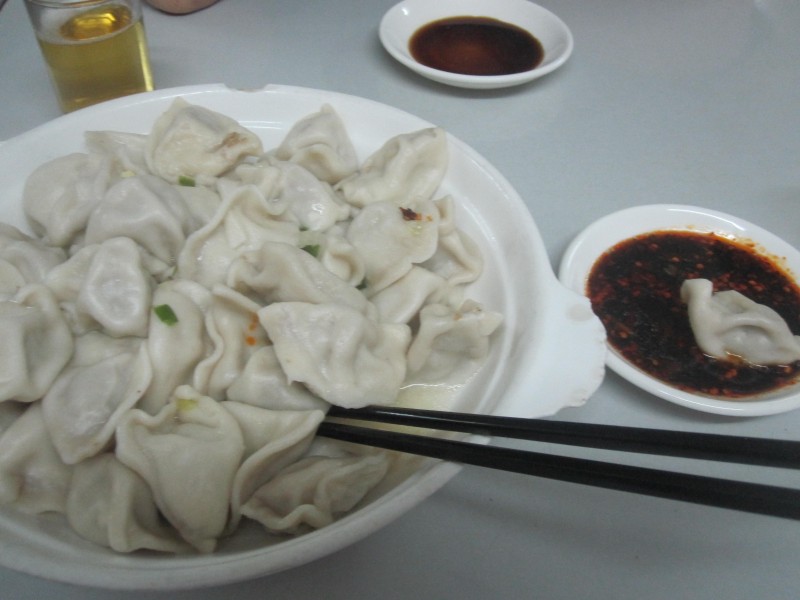 Jiaozi are tasty and super economical. I think this huge bowl was about 4 USD!  Dumplings, like Tiajin’s famous steamed buns, are filled with minced meat (all sorts, from beef to sea bass) and chopped leeks, served with a side of vinegar-soy sauce mix and chili paste.  Vegetarian options are also available.

I actually took this picture in Beijing en route to our Embassy passport run, but Chinese pancakes are also ubiquitous in Tianjin … and for good reason.  They’re delicious!  Made of a flour-and-egg-based pancake, then seasoned with chilies, leeks and salty sauces, topped with a hunk of fried dough and rolled up into a hot, steamy sandwich, it is the perfect freshly-cooked, delicious snack (or meal, really) to eat on the go! Perhaps our favorite Tianjin street food of all!

Baozi are a Tianjin specialty, and no wonder.  Like the dumplings, they are super cheap, delicious and fun to eat.  If you’re a novice at chopsticks and need a confidence boost, dig into these for a primer.  They’re just the right size!  Also like the dumplings, Baozi are typically filled with minced meat and leaks (or all-vegetable matter) and served with a side of soy-and-vinegar sauce with an option for chili paste.  The smaller size, seen here, are served in a bamboo steamers in groups of eight or so.  A larger size is often sold by street vendors, sold individually (about 10 cents for one!).

In the interest of  unbiased reporting on Tianjin street food, I feel compelled to include this unfortunate choice in our snack repertoire.  They look kind of interesting, right?  Cute little donut-holes plucked piping hot from the griddle….  But do not venture down that dark path, my friend, for you know not what terrors await.  This — coming from a gal who used to eat chalk and mud and flowers and who knows what else, just to know what it tasted like — is no idle warning.

The soft, slightly crisp, extremely oily exterior gives way to a squishy squid bomb in your mouth.  And since it is street food in every sense of the word, unless you are emotionally prepared to gag the monstrosity from your mouth right in front of thirty or more people, you are forced to keep it in.  And since it is so hot that you can not possibly swallow it whole, you are then forced to half-gum the nasty, squishy, squid muck with half-open lips until it cools enough to gulp away.  So gross.

But they do look kind of cool…. 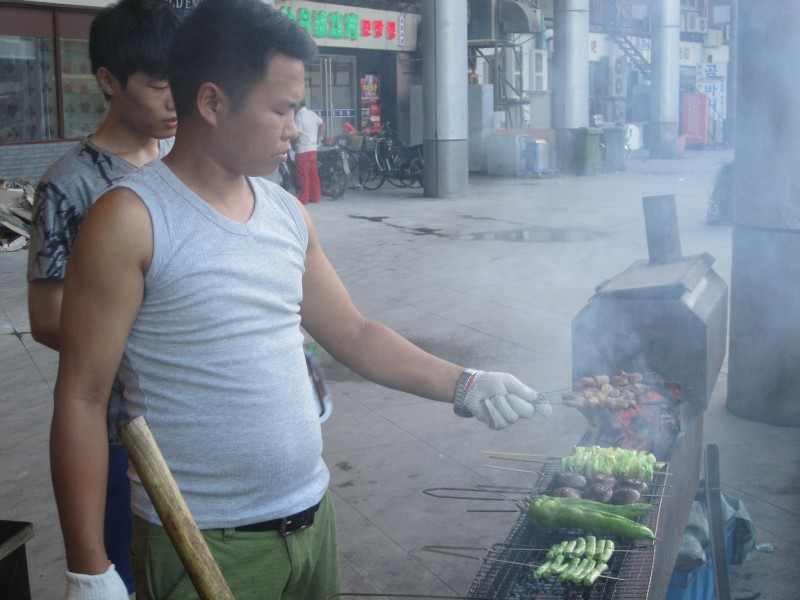 I used to wonder at the restaurants in the States or elsewhere touting “Mongolian Barbecue Night” and question if such a thing actually exists in those northern Asiatic regions.

Come to find out, it does.  There is no sweet, brown-sugar based sauce on these skewers, though.

Here, barbecue consists typically of one type of meat (or meat product, and sometimes you even see veggies — as the picture above illustrates) on a stick, seasoned lightly with seasoning salt, chili pepper and a hint of caraway, I believe, and then smoked on a charcoal griddle. 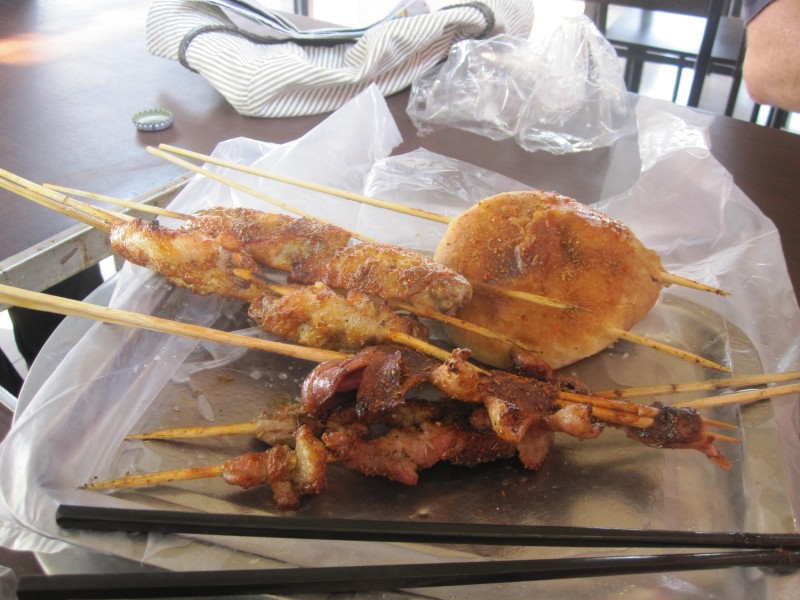 And it doesn’t discriminate.  I’ve seen hot dogs, fish balls, whole cuttle fish (which is really tasty by the way) and even potato bread (seen here) grilled in this fashion.  It is all good.  You can’t go wrong.  And sometimes, if you’re lucky, you might even be able to eat it in a little, street-side yurt! 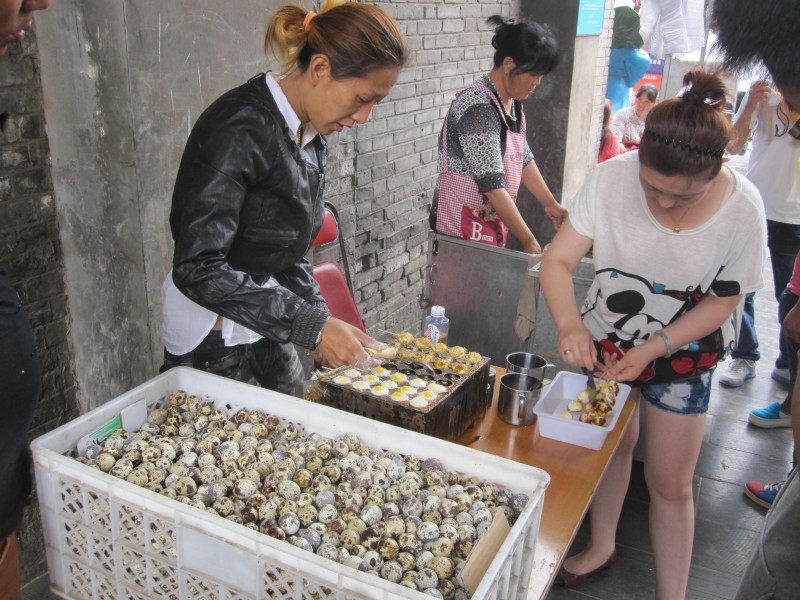 These, we spotted whilst wandering down Tianjin’s Ancient Cultural Street (which, by the way, isn’t ancient in the least, unless one considers a late 1980’s development to be ancient.)  The quail eggs are cracked and then cooked in little, round griddles as is shown here.  A bamboo skewer is pushed through the eggs while cooking so that, when the whites harden, the lot can be pulled off like a shish-kabab!  Once you’ve got your stick, you swipe it down with chili and salty sauces.  Our rating?  Just okay, but worth trying for the experience. 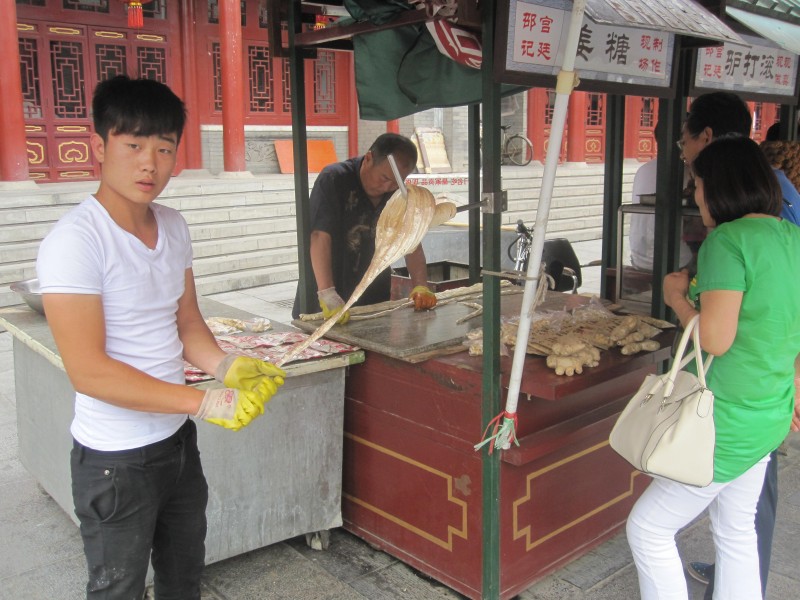 I didn’t try these, but it looks interesting enough.  And come to think of it, perhaps there is a reason why these are sold adjacent to the nasty squid donuts vendor — to cleanse your pallet!

This picture shows the vender pulling and twisting the ginger candy into long strings.  In the back, you see another man who is cutting these strings into little pieces that harden into candy bits.  The end result is hard ginger candy packaged and sold in little plastic bags (displayed on the silver cart). 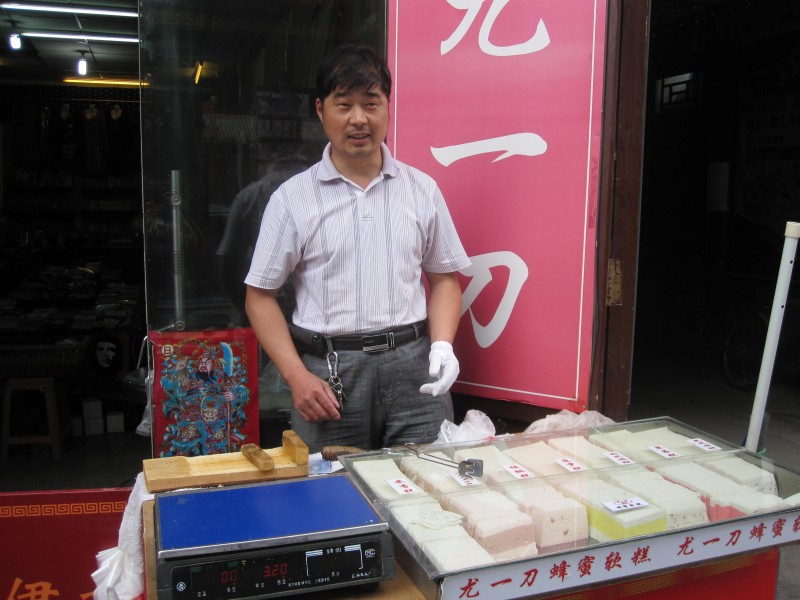 Sesame Cake Slices are one of those things that look better than they are.  They display almost like tidy rows of gelato — colorful, pastel squares of thinly sliced sesame cake.  The friendly vendor, shown here, takes whatever selection you point at and weighs it on the scale to his right.  We chose four different flavors and paid probably a dollar or two USD for a pound of this stuff, so the price can not be faulted. 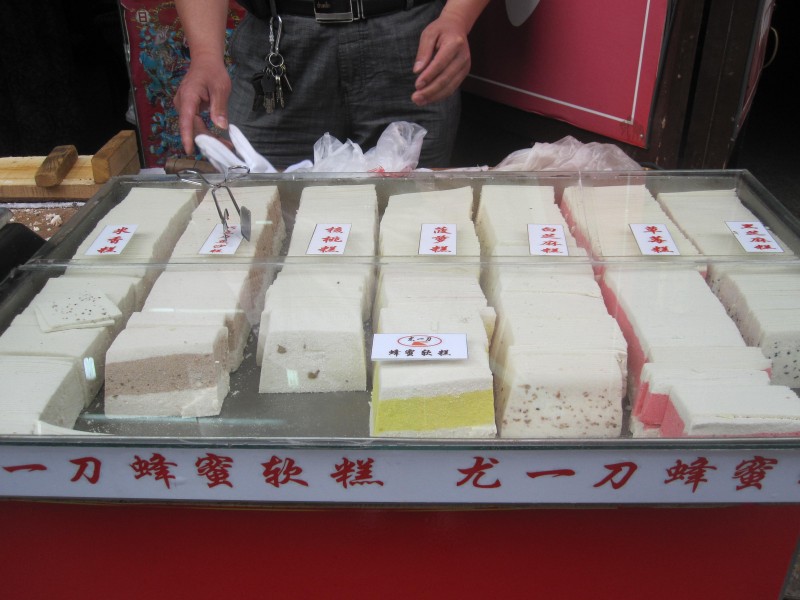 The flavor, however, isn’t anything to write home about, even though, in a manner of speaking, I am anyway.  But I enjoy dichotomy.  At any rate, the taste is mild, slightly sweet, with a dried, pasty, starchy mouth-feel.  And as for the assortment in colors, while they imply various flavors (at least they did to me) the difference in one from the other is barely noticeable at best.  Interesting, yes.  And maybe it’s one of those things that grow on you if you keep coming back.

I would be remiss in my Tianjin street food coverage if I did not include a little more on Ma Hua.  These creatures are interesting, if only because they are so extremely popular.

Ma Hua are kind of like giant Churros — another popular snack here — only Ma Hu are not light and airy and crispy.  That would be weakness un-dough-ified.  No!  Ma Hua are thick, hard on the outside and slightly chewy/greasy on the inside, with hints of spices that are certainly not unpleasant.  I think, if I were to single out why I am not a huge fan, it is probably because it seems like a lot of greasy dough for little benefit.  But I suppose that is exactly the same dynamic as sugar cookies or potato chips or all kinds of sundries popular back home.  So who knows?  I might develop another bad habit yet.

7 thoughts on “Street Food in Tianjin”