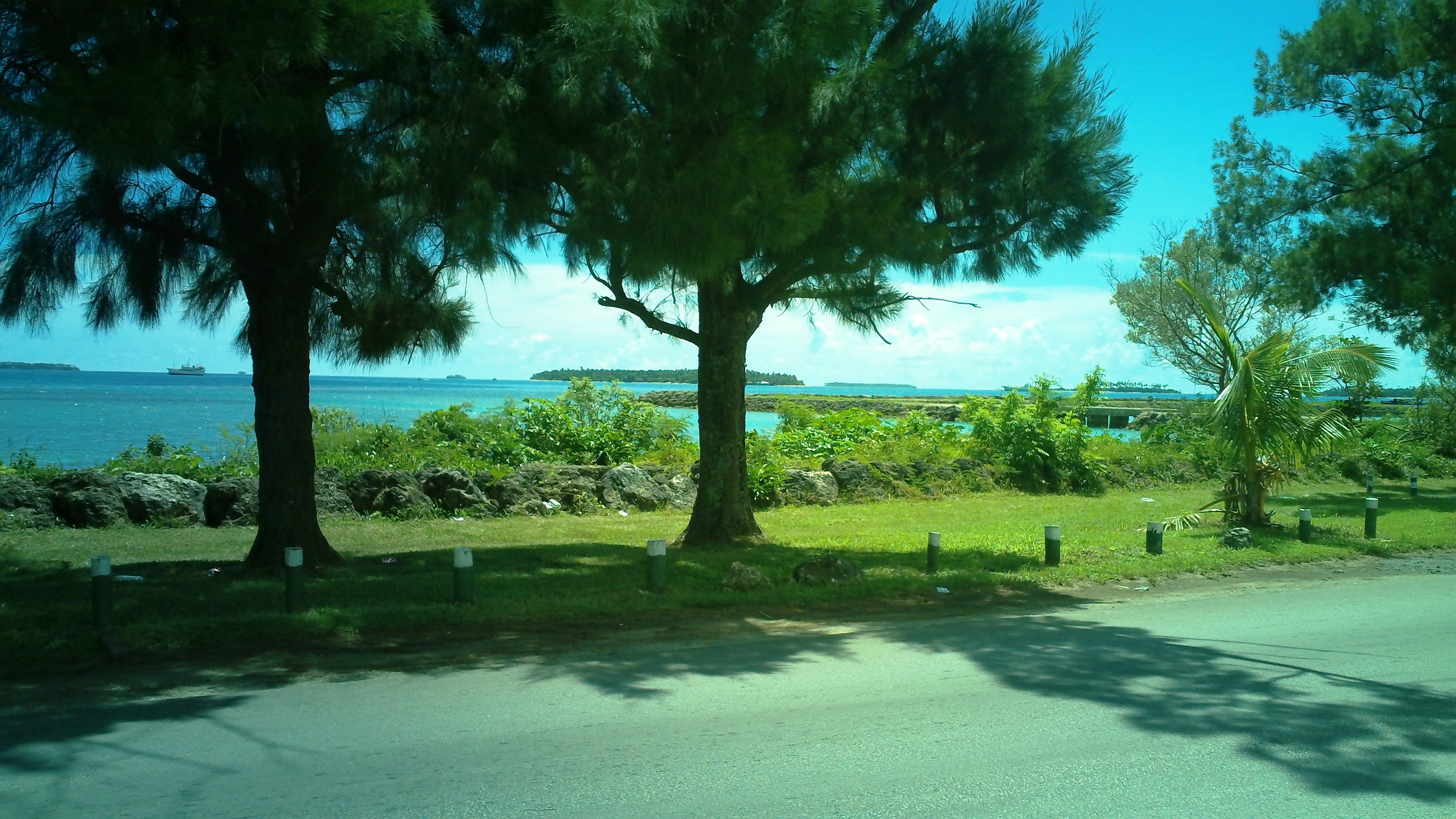 This is the view Sam and I encounter every day, after walking or riding up a side road from our house for about one third of a mile. Our road ends here, at Vuna, which is the main road going along the coast of Nuku’alofa, Tonga’s capital city.  Not too shabby!

The island you see in the distance is Pangaimotu, a little “resort” island about a mile and a half away by kayak, with a ramshackle restaurant facing a rusty, abandoned fishing ship doing the eternal downward dog into the sea.  More on Pangaimotu and other destinations about the island of Tongatapu in a later post, but today, I wanted to share what happens when that perfect blue shrinks back at low tide, exposing the flat, inner coral reef that makes up most of the shallows about our island.

This is what that same area looks like at low tide: muddy banks swathed in sea grapes and interspersed with coral, sea urchins, mollusks and more.  At these times, the coast is dotted with women and men “fishing” for shellfish and, if the season is on, sea cucumbers, which is a huge trade here.  I’ve never lived anywhere where these cucumbers thrive so abundantly.

On this day, I encountered two women, one whose name, I believe, was Esther.  I don’t recall the name of the other woman, probably because after chatting for several moments and taking a few pictures, the second woman began acting strangely as she posed for a picture, and just as I was taking it, she put her fishing knife to the throat of the other woman (Esther)!  Yikes.  Esther didn’t seem to mind — by all appearances, they were well acquainted with each other — but I thought it best to cease photographing after that moment.  I put my camera down and said she should lower her knife.  I didn’t know what else to do!  But that must have done the trick because the other woman shrugged and wandered off with her bucket and Esther sanguinely continued on with her shell sorting.  I am pleased to report that I’ve seen both of them at low tide since then!

So here’s a few pictures of the low-tide fishing done around Nuku’alofa (forgive the greenish tint; I took these with my cheapo waterproof camera):

This little guy was squeezing that pufferfish in his hand and calling it his pet.  Huh.  And the hand signals?  Children (and some adults) love to flash apparent gang signs whenever their pictures are taken. I don’t think they know what any of them mean, they’ve just seen people doing this on TV and in movies, and therefore, it must be cool.

And here’s a couple pictures of the sea cucumbers in the region (water is still covering them, hence the somewhat hazy filter).  When Sam and I first encountered these, we kind of freaked out!  We thought they were octopus legs or something (and they have those here, too, small versions, but still…) — at higher tide, it is hard to discern what exactly that slowly stretching-out, alien-like thing is!  In fact, the day  I took these was when we were able to figure it out.

There are tons of sea cucumbers here, and it’s mostly the Chinese businesses that pay for these harvested echinoderms.  You see them drying the cucumbers outside of shops like this prior to, I assume, packaging them for export.  They sell for a pretty penny in the international Asian food market.

Here’s the scary lady looking for shellfish (pre-knife-pose). She flipped a coral over to show me the mollusks underneath that she planned to harvest.

And this is Esther, the friendly shell digger who cheerfully presented me with a Stonefish, one of the most venomous — not to mention camouflaged — fish in the world.  It can even be deadly.

When stepped on or “palmed-on” (as is sometimes the case here where one uses one’s hands to more or less navigate/swim through the shallows), the dorsal fin bristles up and a toxin transmits through it, into the unsuspecting appendage.  And because this critter is difficult to see, it’s always a bit unnerving to walk among its habitat near coral and rocks.  I’ve been told that the fishermen here know how to treat a sting, but despite my inquiries, what that “treatment” is remains a mystery.

Well, when Esther showed me this one, I was shocked by how casually she held it.  When I asked, “Isn’t it poisonous?” she replied, “Only this,” and promptly grabbed the dorsal fin to show me the poisonous spine bristle between her fingers!  Brave lady.  I was worried she’d hurt herself –maybe that’s why these are in such poor focus! — but she seemed to know exactly what she was doing.

I took another picture of her bucket of shells; these little guys are home to various invertebrates  which are a delicacy in the South Pacific.  Sometimes at the market, you can spot old bottles stuffed with strange-looking globs, often orange or a dark grey in color.  These are the slugs (and/or sea urchin innards and/or mollusks) and are often eaten raw.  I can not attest to their flavor as I’ve never had the guts to try it!