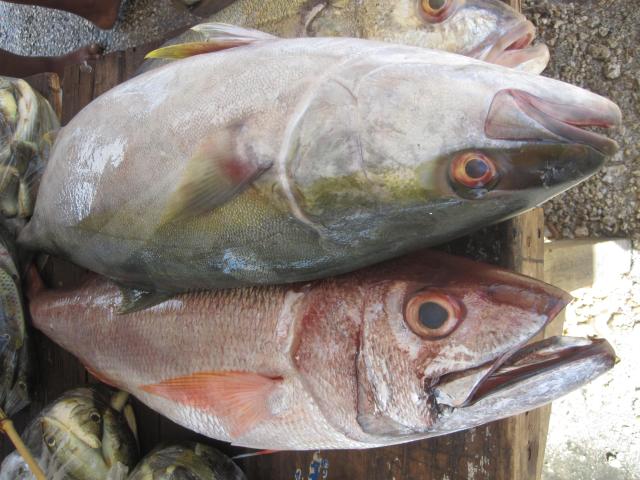 I’ve been so busy the past few weeks that I’ve neglected my blog posts, not to mention the not-so-inspired cooking of late.  But the other day, I had a craving for fish that could not be quelled.  The afternoon was sunny, with a mild, salty breeze that just begs for a bike ride into town, so I hopped on my trusty Holland-rad (“Oma Daisy” for those in the know) and pedaled to the one stall in Nuku’alofa where fresh fish is actually sold on ice.

When I reached the place, the fish monger — I suppose that’s what I should call him, but “monger” always sounds like an insult to me, for some reason — okay, so the fish guy was sitting on the curb, smoking a cigarette.  It was almost five in the afternoon, so I asked him if he was still open.

“io,” remarked the man, and then he continued to smoke.

“Do you have Snapper?” I asked, hopeful.

“io,” he said again, but I wasn’t entirely sure by his answer if he would sell me any.  I shuffled into the stall and noticed that the ice bins were empty.  The man finished his cigarette and then sauntered over to a large plastic bin that looked an awful lot like a rubbish container.  He opened the top to reveal an enormous pile of fish, all stacked in random clusters inside.  He pulled out a nice-sized red snapper, weighed it on a well-used scale that would probably be best left un-described and informed me it was 15 pa’anga a kilo.  I asked him if anyone was in the back who could clean it for me — a request quite unusual here as there isn’t such a service anywhere as far as I’ve been able to tell, but I’d always paid someone a bit extra in the past to scale and gut it.

The man went into the back, asked around, and came back to inform me that no one would clean it.

“Not for four more pa’anga?” I asked.

“Please?  I’m terrible at it — scales go everywhere and I’m finding disgusting bits and pieces for weeks!” I plead.

“There’s nobody at all that will clean it?  Not for extra?”

Uncomfortable silence ensued.  He sighed and looked over at his friend who had wandered in, seeming to take an interest in our transaction.

“What about him?” I asked, trying to attempt humor.  “Can he clean fish?” to which I was treated to an obviously indignant reply, even though I couldn’t quite understand him.

“I guess that is a no,” I laugh and cringe at the same time, but the fish man looks back at me blankly.  “I’m sorry, I was just asking — he could’ve just said no; he doesn’t have to get angry about it!”

And this, to my surprise, resulted in a round of hearty laughter and a smattering of Tongan words.  I took out my money and dejectedly offered the 35 pa’anga for the fish, resolved to two laborious hours of inept fish cleaning and a kitchen decorated with fish scales, when the man held up a hand, still chuckling, and told me to wait. He shoved a 5 pa’anga note into his friend’s hand.

Throwing a sly grin my way, his friend trotted out of the stall, got into his red, Dukes-of-Hazard-inspired car that appeared to have a loose wheel, and rumbled off.  I looked from the car back to the man.

An older gentleman joined us at the stall; he wandered behind the counter to stand beside the fish man, and they chatted for a few minutes while I stood there.  A few minutes later, a rumble announced the return of our friend, who was now jumping out of the car with a large knife.

“Is that it?” I exclaimed in astonishment.  “You didn’t have a knife?”

“io,” said the fish man, grinning as he took it from his friend, and then he plopped the fish on the ledge of the empty ice bin and proceeded to filet it right there in the middle of the stall, guts and fish juice going everywhere, but I have to say he did it all with more aplomb and expertise than I’ve ever witnessed before in my life, and within a matter of seconds, I had two flawlessly fileted sides of snapper.  Well, I was shocked, not to mention the fact that I had only wanted him to gut and scale it!  His friend and the older gentlemen seemed almost as impressed as I was, each watching the action as if engrossed in an award-winning documentary.

“Can … can you scale it?” I asked nervously.

“You should have asked for him to do that before he cut it,” frowned the older man.

“I know!” I sputtered, feeling awful about that.  “But I was stunned into inaction, and I didn’t realize he was going to filet it, and then, I guess I thought he had his own way of doing things and he preferred to filet before scaling.  I didn’t know … I’m sorry, never mind, this is great, just as it is, thank you!”

I reached up contritely with my money once again, but the fish man sighed, shook his head and then grabbed a plastic bag.  He placed one of the filets on it and then proceeded to hack off the scales, sending pearlescent flakes this way and that, into the empty ice bin and all over the floor, flinging onto clothes and into hair, and I thought that it looked almost like some sort of magical rain storm, only with the precipitation falling up and out instead of down.

“Yes, perfect!” I exclaimed, truly delighted.  “So … next time I come, is that what I should do?   I should just bring a knife?” I asked, still amazed.

“io,” nodded the fish man, smiling at me, and his friend nodded and smiled, too.

“Any of us can do it, just bring the knife” he put in gallantly.

“Bring a big one,” added the older gent.

The fish guy handed me the bag of filets and then a bag with my fish carcass.  More thanks and then, with fish plopped into my rusty bike basket, I head toward Vuna Road.  A few moments later, a red jalopy passes me in a cloud of dust and smoke; a horn honks in short friendly spurts and then a hand waves enthusiastically in the air as the car passes.  It’s the fish guy’s friend, a wide smile on his face.

I waved and smiled back, and it was a weird thing to realize.  I didn’t know his name.  I didn’t know any of those three guys’ names and they didn’t know mine.  But on some level, I felt as if I’d just made a few friends.  And as I rode my bike down the dusty road of Vuna, dilapidated shops on one side and perfect, aquamarine sea on the other, I couldn’t quite believe my good fortune.  Only in Tonga would buying a fish be so much fun.  And only here would I see one of life’s truisms so uniquely illustrated: sometimes, obstacles aren’t at all what they appear to be; sometimes, people seem one way when the reason is altogether different.  Sometimes, all it takes to scale an obstacle isn’t the extra tip or your sad, fish-cleaning-skills-deficiency-story, because sometimes, all it takes to scale that fish is a knife.

One thought on “Scaling Back Assumptions”