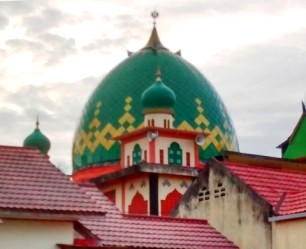 Balikpapan, the city in Indonesian Borneo, where Sam and I currently live, lies just 88 miles south of the equator. And today, June 21, marks the Winter Solstice for us and the Summer Solstice for those living north of the equator. It also happens to be a few days into the Muslim holy month of Ramadan this year, when (amongst a myriad of other observations and probably as many exceptions) followers abstain from eating or drinking during the day, pray six times throughout (starting at around 4 in the morning), and break their fast at night.

Life in Balikpapan during Ramadan

Incidentally, our city calls itself “Kota Beriman,” which roughly translates to Faithful City or City of Believers. And I’m pretty sure they mean it. Mosques here are abundant; in fact, I do believe they even out-do those tiny Southern towns in the States where a church stands at every street corner. We don’t really have street corners here, but we have roads and tiny alleyways snaking in every conceivable direction, and I don’t think I’m exaggerating to say there is a mosque about every few hundred yards, with more going up every day it seems.

The daytime mood of the city is noticeably more subdued during Ramadan, but at around 5:00 in the afternoon, the streets become packed with scooters, cars and public minivans called “Angkots.” Everyone is in a rush to get home for evening prayer and then hit the local feast after sunset. Mosques swell in their population; so much so that devotees spill from the doorways, out onto the tiled patios and even bordering the street. It feels a bit like our version of Christmas or Easter, where everyone wears their best clothes and a sense of excitement and significance permeates the air.

And at sunset, it’s definitely time to party. Communal feasts go on everywhere, firecrackers shoot off in the middle of the street and kids run spastic-ly around their kampungs, greeting anyone who passes by with huge smiles and sugar-high laughs. Then, at around 7:30 at night, more praying as portions of the Qur’an are read. According to a local acquaintance, the nightly prayer can go as long as two and a half hours!

It’s an interesting time to be here, and to experience the different ways in which people observe their faith. For the most part, even though Balikpapan is overwhelmingly Muslim in population, there is a tolerance for other beliefs and customs.

For example, while the general tenement for Muslims is to abstain from alcohol, the consumption — or even the sight of it — is especially taboo during Ramadan. Even so, to my great amusement, I observed a few establishments serving the local Bintang beer to thirsty non-Muslim patrons last year during this time, except here’s the catch: the beer is only served in coffee mugs!

Or another example: yesterday after Sam’s work, we took a group bicycle ride to a mangrove forest where proboscis monkeys are said to arrive from deeper within the forest to sleep at night. We asked Pak Yayan, a local bike guide who is nothing short of amazing, if he could lead the way as we were not sure of the directions. He cheerfully accepted the task and proceeded to ride the 14 or so kilometers from his home to our place, and then lead our group from there for another 18 kilometers to the mangrove forest. And while it was an overcast afternoon, we’re still in the tropics. You know, like … Borneo tropics!

So, anyway, it wasn’t until 45 minutes into it that I noticed his water bag contained no water. A friend wanted to know if Pak Yayan was abstaining from drinking due to Ramadan, and when I asked him, he laughed cheerfully and said, “Yes! But do not worry — after sunset I can drink some water!” I proceeded to apologize for my thoughtlessness for asking him to guide us under fasting conditions, and he laughed harder and said, “No, don’t worry. If I stayed at home, I would only moan and groan like a sick person. Here, riding my bike, I am happy!”

While these anecdotes are admittedly rather surface reflections, I find they show an adaptation and acceptance that, at least from my outsider’s perspective, seems to be shared by most of Balikpapan’s citizens. And though I am not a Muslim, I count myself fortunate to experience in some small way this holy time that gives meaning and purpose to so many.

(All photos of people were taken after being granted permission.)