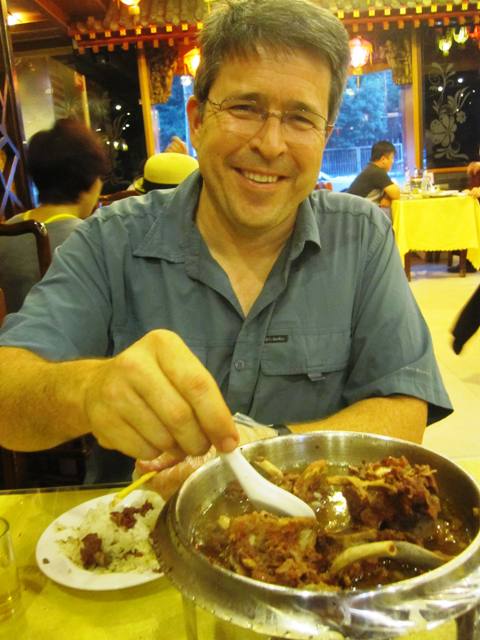 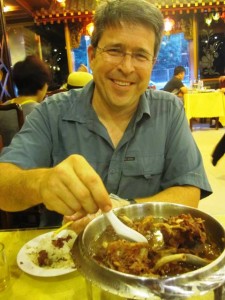 When Sam and I first arrived in Tianjin, we were excited to explore the local eateries near our hotel.  The trouble was, our language lessons had not advanced beyond basic greetings and naturally, all the shops and restaurants were identified by Chinese characters.

Undaunted, we consulted Google maps, relying upon our Chrome browser to translate the names of various establishments in our area.  Voilà!  One translation in particular caught our interest:

I glanced from the translation to my husband, bemused. “Do you think it is really a restaurant selling donkey meat?” I said.

“There’s only one way to find out,” Sam said.

And with that, we hit the streets.  We walked several blocks, scanning the store fronts in the vicinity of our map for any indication of donkey meat.  We discovered bakeries and noodle shops, sausage stalls and convenience stores.  We spotted several potential one-room eateries where donkey meat could possibly be a contender.  I’d peer through the window and stare hard at the slabs of meat hanging above steaming pots.

“Does that look like a donkey-meat cut?” I’d say.

After an hour, the only results we had accumulated were the curious glances from various establishments, wondering what these weird Laowai were doing peering through their glass-shop fronts.  I could sense the tensions rising.  Sam was hungry.  I was hungry.  We were lost in a sea of shops and offices and restaurants whose names might as well not exist because we could not decipher them.  And neither of us could communicate enough Chinese to scrap together a bottle of water, much less dinner.

And then finally, we passed a larger establishment: an all-glass façade, warm interior, stuffed with people eating and drinking.  They looked so happy in there.  We were so hungry and cranky out here.  And best of all, I could tell from the menu sitting near the window that they actually had pictures next to all of their dishes!  I pointed at the door and announced, “That one.”

After a few more awkward moments, our waitress must have realized how utterly ill-equipped we were for the task and politely pointed at a featured dish within the menu.  Sam and I nodded our consent.  Our waitress left, satisfied.

Ten or so minutes later, she returned with a pot steaming with cloves and meat bones.  She placed the pot in the middle of the table, lit the burner underneath and left again.  Progress!

It was then that we realized our next conundrum:  We had a pot of meat bones, two tiny plates and two hermetically-sealed packages that we assumed contained our eating utensils.  Unwrapping these, we discovered a pair of chopsticks, a napkin and … a plastic glove?

Now, Sam and I are no experts, but we can manage chopsticks well enough to at least stave off starvation.  But the plastic glove really threw use.  We looked around the restaurant, glancing at our fellow patrons for guidance.  A table over, I spotted a dainty, be-gloved woman expertly holding a bone with her gloved hand while picking off the meat with the other hand using chopsticks.  Aha!

Triumphant, Sam and I donned our plastic gloves and began emulating our neighbor at the picking-and-eating-of-unidentified-but-quite-tasty meat with the best of them.  Well, not really.  Our table looked terrible compared to everyone else’s, but the point was, we were trying, right?

We eventually concluded that our dish was definitely not our sought-after donkey meat (it was mutton) but we had what mattered: stomachs full of warm food and an experience we will always remember.

2 thoughts on “In Pursuit of Donkey Meat”