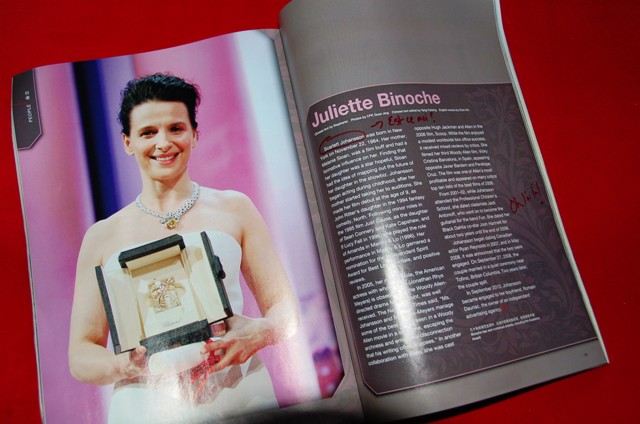 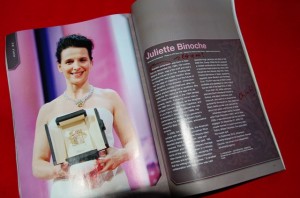 It has been weeks since a post has gone up, mostly due to laziness, but also due to the strange clumps of vacation time Sam has had to fit in before the end of the year, lest he lose it.  Solution?  Plane jaunts to Shanghai and another to the Yunnan province in southwest China.  Both destinations were amazing in their own way, but one of the unexpected delights of our journey(s) was actually discovered in-flight.  Specifically, the oft-hilarious magazines found in those fuzzy, peanut-lined pockets of your Chinese domestic airline.

For example, the article above.  I was pretty intrigued to find this one because Juliette Binoche is one of my favorite actresses.  (The English Patient?  Chocolat?  Pure awesomeness, the both of them.  And I know I’ll probably be mocked for admitting to it, but I really liked her in (and the movie) Dan in Real Life.)

But right off the bat, something was clearly amiss.  Because according to this piece, Binoche’s real name is Scarlett Johansson.  She was born in 1984, the article proclaims, attended Professional Children’s School from 2001 to 2002, and has starred in such movies as North, Match Point and Vicky Christina Barcelona.

Ironically, no mention of Lost in Translation was made.

Maybe it is just me, but I thought the whole piece riveting.  Now, I like Scarlett Johannson, but the idea of Binoche becoming Johansson was a fun idea to entertain whilst eating my microwaved lichen sandwich.  Thanks for the memories, xx Airlines!

Side note: The gaffe sparked my curiosity to peruse other in-flight entertainment and I was rewarded with the following gems of insight.  I actually found them just as interesting from an anthropological standpoint as I did amusing:

On the American vacation:  “Heading out into nature is what most Americans like to experience …  [But] Most Americans do not like to spend their vacation with others, but alone.”

And on what to expect out of the all-American road trip:  “Father is behind the wheel, mother consults a map while their kid sucks a nipple; bearded men wearing sunglasses accosts someone in another car through the open window.”

Word for word.  That’s how we Americans roll.

And then there are insights into other regional proclivities.  The British, apparently, like to spend their vacation lying on the grass while the folks of Nordic climes remove their families from civilization for a week or two each year.  Australians love the beach, of course, and the French, if I recall correctly, like to shop, smoke and sunbathe.  The Canadians were pretty much like Americans: they like to camp, hike, etc., but they’re more social about it all.

So there you have it, folks.  A sampling of Western European, Oceania and North American holidays at your disposal.