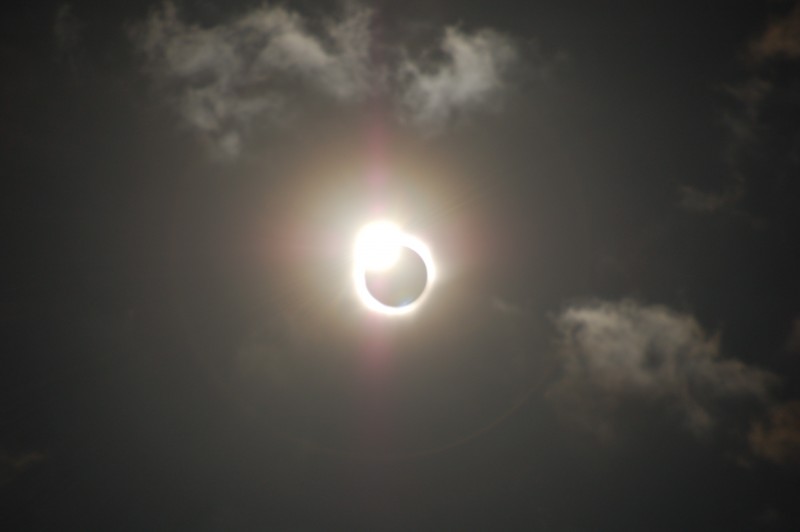 Here’s what happened when I made a DIY Solar Camera Filter out of used X-Ray film to photograph a Total Solar Eclipse.

Way back when, on May 30, 1984, there was a (nearly) Total Eclipse of the Sun visible in my neck of the woods (Stone County, Mississippi), exactly 365 days after the U.S. release of Welsh Singer, Bonnie Tyler’s, awesome multinational number 1 hit Total Eclipse of the Heart … coincidence?

I still remember that day distinctly, with a level of deep disappointment. It was a Wednesday morning and I had just recently been released for summer break after completing my sophomore year at Stone County High School in Wiggins, MS. Without going into details, but due to circumstances mostly beyond my control, I ended up missing out on the opportunity to view this “Once in a Lifetime” near-total Solar Eclipse.  (I say it was a near-total eclipse because technically it was what is known as an annular eclipse.  A nice explanation of the differences between an Annular versus Total Solar Eclipse can be found here.)

Ever since, whenever I’d see a blurb on the news about a solar eclipse occurring, it was always in some far-flung place like Papau New Guinea or Djibouti, and I’d sadly think to myself, “I’ll never get to see one of these things. I totally missed my chance back in the 80’s”

So, it was with a level of excited delight that I saw on the news a week or so ago that another Total Solar Eclipse would be occurring in another far-flung place on the morning of March 9, 2016, but unlike all those other times before, this time the “far-flung place” just happened to be Indonesia, and more specifically, it would pass directly over Balikpapan, East Kalimantan, which just happens to be where Jesse and I are currently living!

I couldn’t believe it. I was getting a second change at experiencing a “Once in a Lifetime Event.” Even better, March 9, 2016 just happened to be a National Public Holiday here in Indonesia (Bali’s Day of Silence and Hindu New Year, known as Nyepi), so the clinic where I work would be closed for the day, allowing me to fully enjoy the eclipse.

I immediately thought, “Gosh I hope the sky is clear that morning” followed by “Oh man, I totally want to get some photographs of this.” Then it occurred to me that I wasn’t really sure how one should best go about photographing a Solar Eclipse. So, I turned to our old friend Google, and one of the first search results I came upon was a webpage by Nikon titled “How to Photograph a Solar Eclipse“. This seemed fortuitous to me as Jesse just happens to have a somewhat long-in-the-tooth Nikon D50 DSLR camera. So, I began devouring all I could on the topic and immediately came to the realization that in order to avoid destroying one’s eyes and camera equipment when photographing the sun, it is necessary to use a solar filter over the lens. Uh oh. I don’t have a solar filter, and as we are now living in one of these previously mentioned “far-flung” places, the prospects of obtaining one in time to capture the eclipse didn’t look too promising.

Not to be defeated, I began googling how to make a DIY solar filter. A few different webpages suggested making one out of a mylar emergency blanket. I thought we had one or two of these, but after turning our supply closets upside down, I determined that alas, these must be sitting in our home in the states. Back to square one. Ugh! So then, I began trying to think of alternative materials, and decided to give it a try with some used X-ray film. (The day before the eclipse, I saw a couple of  nurses I work with and our clinic x-ray technician making some “eclipse viewing glasses” out of used x-ray film and I had warned them that this was a bad idea and could result in sunburned corneas and possible retinal injury as it would offer no UV protection. I know. I should learn to practice what I preach.)

I was pretty much flying by the seat of my pants at this point, not really knowing how to make a solar filter. The DIY instructions for making one out mylar said to use about 4 layers of material, so I figured I’d try to make mine with two layers of the darkest section of film I could.

Using a lens hood as a stencil, I traced out two circles on the film and cut out two disks of dark exposed x-ray film, then trimmed them up until they both fit inside the hood.  I then attached the hood to the camera lens with the filters installed.  I didn’t use any tape or anything similar.  I just sort of jammed them into the lens hood. Because I had no idea how these filters might affect the exposure, etc., I really didn’t have any idea what sort of camera settings to choose. So, I just decided to wing it. I set the camera for manual settings, and set it so that it would save each picture as two separate files, a .jpeg and a .NEF (which is the Nikon version of a “raw” image), under the presumption that if what I ended up with was just garbage due to poor exposure settings, I could perhaps open the .NEF files on my computer in the Gimp program and manipulate the exposure. Disclaimer time: to call me an amateur at this stuff (photography, computer image software use, etc.) would be a massive compliment. I really really really don’t know what I’m doing. But it’s sort of fun to tinker around.

The Day of the Total Solar Eclipse Arrives

So, the morning of the eclipse arrives and I go outside to our front yard, where I have a perfect clear view of the rising sun, and set up the Nikon D50 on the tripod with a Nikon AF-S DX Nikkor  18-200mm VR lens. There were a few wispy clouds in the sky, but otherwise conditions looked great. I figured I’d start off with two layers of my DIY X-Ray film solar filter. By the time I got everything set up (including the time it took to swat repeatedly at a large hornet that kept hovering in my face, before finally running inside and grabbing some bug spray to drive it off), the moon was already starting to encroach upon the sun.

I extended the lens to it’s full focal length and manually focused it on infinity. I left the white balance on auto for all shots.

The First Camera Shots Give An Unexpected Result

This first shot was with the settings of ISO 200, aperture f/29.0, and shutter speed 1/2500. The result was rather surprising to me. The darkness didn’t surprise me too much, but the bidirectional prism-like effect sure did. If somebody reading this has some expertise in optics, they can educate me in the comments below, but I’m guessing that the Silver Halide crystals in the x-ray film must have some sort of birefringent property causing them to split the light beam this way. For clarity, this film wasn’t from an old school analog X-Ray that was developed in liquids, etc. Rather this is a hard copy print from a digital x-ray. In my prior career as a veterinarian I worked quite a bit with the older type of X-rays and used to shoot and develop my own stuff by hand and had a fairly good understanding of the nitty gritty details of how it all worked. That seems like a lifetime ago now however. My knowledge of the newer digital stuff is pretty basic at best and as is the norm in “Human Medicine” as a doctor I don’t ever get involved in the shooting or processing of images at all. I just order the X-Ray, and then view the final product once it’s ready for me. Anyway, all of this is to say, that I think the digital printouts still use some sort of Silver Halide film, but that’s little more than a guess on my part. Again, I welcome some education in the comments section if anyone can bring some expertise to the conversation here.

I fiddled with the adjustments a bit to try and make the images a bit less dark by keeping the ISO 200, but changing the aperture to f/5.6 and shutter speed to 1/2000 for this next shot. The bright single sun in the center is where the actual sun was located and the other “clone” suns out to either side are the result of the two layer filter. You can see the silhouette of the moon has encroached about 20% or so here over the sun. I left the camera settings where they were and played around some with rotating my filters both together and relative to one another a bit to see what would happen with regards to the prismatic effect. Some of these look sort of cool and artistic I think. You may notice in some of them that there are starting to be some clouds moving in. Getting Closer to Totality, The Clouds Begin To Threaten

You’ll also notice that as the clouds move in further and the eclipse evolves further the picture are getting darker and darker. So, eventually the sky was getting dim enough that I took the filters off for these shots. The clouds were really moving in which was pretty disappointing. But then, as the eclipse was approaching it’s peak, the clouds began to clear quite a bit. Of course, this started overexposing the shots without the filters in place. So, for a couple of shots, I tried holding one sheet of my X-Ray film filter in my hand out in front of the camera lens and turned it so that the plane of the filter was almost perpendicular to the camera lens. I was trying to see if I could just filter the bright sunlight somewhat, but try to eliminate the prism effect. Sort of cool looking pictures I think, but not really what I was after. Just before the eclipse peaked and the sun quickly began to re-emerge, the clouds really cooperated and got out of the way allowing me to get the following shots which were again with the same camera setting above (ISO200, f/5.6, 1/2000) and unfiltered. After Totality, Getting My Birefringent Groove On

Eventually, it starting getting quite bright again, so I had to use the filters again. I tried a few more with just holding one sheet in my hand out in front of the lens to try to just block the direct sunlight. Some of them have a sort of groovy 1970’s vibe in my opinion. One final thing I noticed, and unfortunately only noticed it as I was wrapping things up, was that for all of these shots, I didn’t actually have my lens focused on infinity as I thought. I had just turned the manual focusing wheel as far as it would go in that direction, but didn’t realize that this Nikon lens actually allows you to rotate it a small bit past the ideal infinity focal position. As a result all of these shots are just slightly out of focus. Ugh! I guess that’s what I get for almost always shooting in auto-focus mode and not noticing this about the lens. Now I’ll have to wait for my next “Once in a Lifetime” Solar Eclipse to try again.

So, with that, I will close this guest post with a little flashback treat from my high school days.  Take it away Bonnie!!!