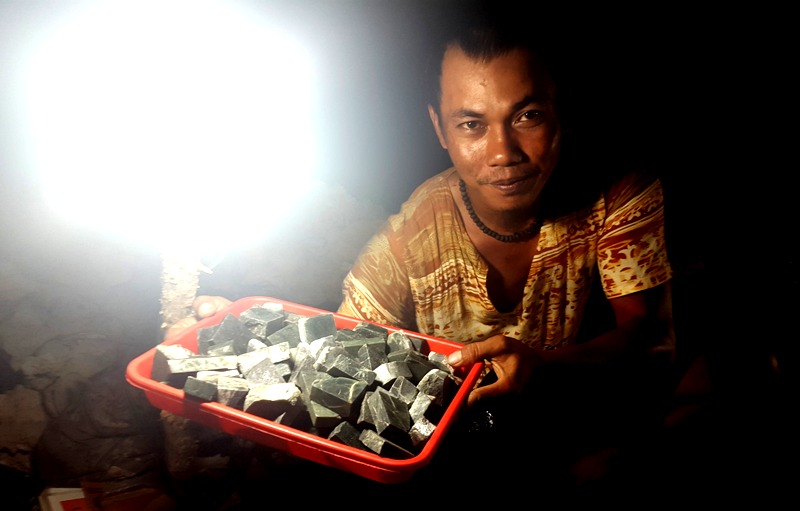 Stone jewelry sales have exploded in Indonesia; particularly for men, who love to wear enormous stone rings and/or stone pendants strung with gold or silver chains.

Within the sixteen months we’ve been in Balikpapan (East Kalimantan Indonesia), we’ve noticed a marked increase in stores and little stalls selling various raw and polished stones within the local markets (pasar) and along the roadside. One of the most popular places to go for stone-shopping is the ever-expanding night market along Jalan Soekarna Hatta (a/k/a Samarinda Road). When we first arrived in Balikpapan, this spot hosted a few food kiosks and maybe some random household items, but now, it is the place to go if you hanker for a stone ring or pendant or anything else stone-related. 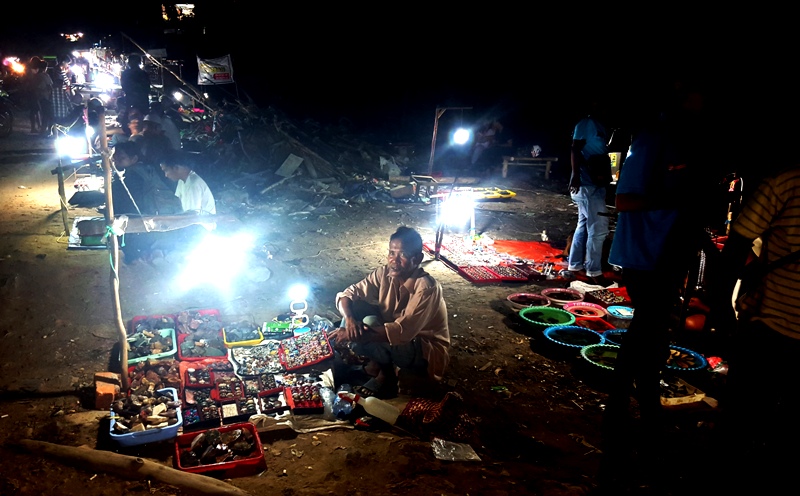 I’ve always been curious about this place whenever we’ve passed by. There is something mystical about the way the merchants roll their carpets and blankets out over the dusty earth, string their florescent bulb from a stick and then meticulously lay out their stone-wares. And I guess it should feel mystical because we learned from a local acquaintance of ours who has taken to collecting excessive amounts of stone jewelry, that these stones are said to hold mystical powers, or pesona. I don’t know what pesona belongs to what stones, but apparently, each type of stone is believed to imbue its owner with something groovy. We did learn that an especially popular stone in Indonesia is Batu Akik, a type of quartz agate that is believed to hold extra powerful pesona. 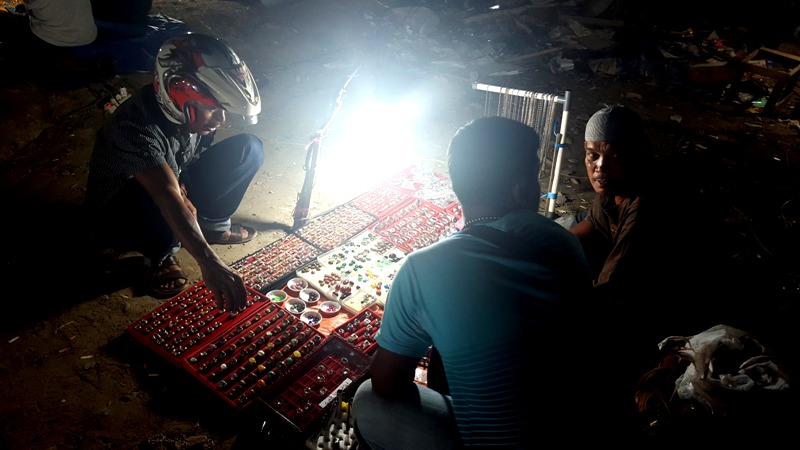 So, last night, while we were returning home from the Saturday Hash House Harriers run, we finally stopped by this night market for a few photos, and to learn a bit more about the mystical stones of Borneo.

As soon as we arrived in our sweaty t-shirts, we were greeted by super cheerful vendors eager to show off their stones, even when we explained to them that we weren’t there to purchase but rather to photograph. “That’s okay,” one of them said as he gestured at my phone. “But we want pictures with you, too!”

He then proceeded to take my phone and direct me to a spot by his friend’s stall where we posed for a few photos. The man holding up the pink stones behind me explained that these are called “Borneo Red Stones” (Batu Borneo Merah) and are particularly popular. When I asked why they are called red stones instead of pink stones, he said there is a solution you can treat them with to term them red, and presented me with a recycled plastic bottle containing said elixer. I don’t know what the liquid contained, however, because one has to buy the bottle before opening it. 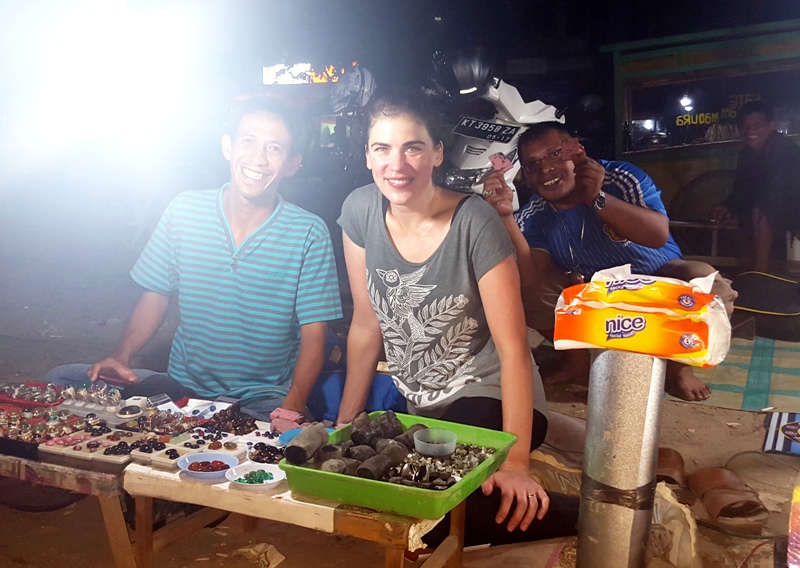 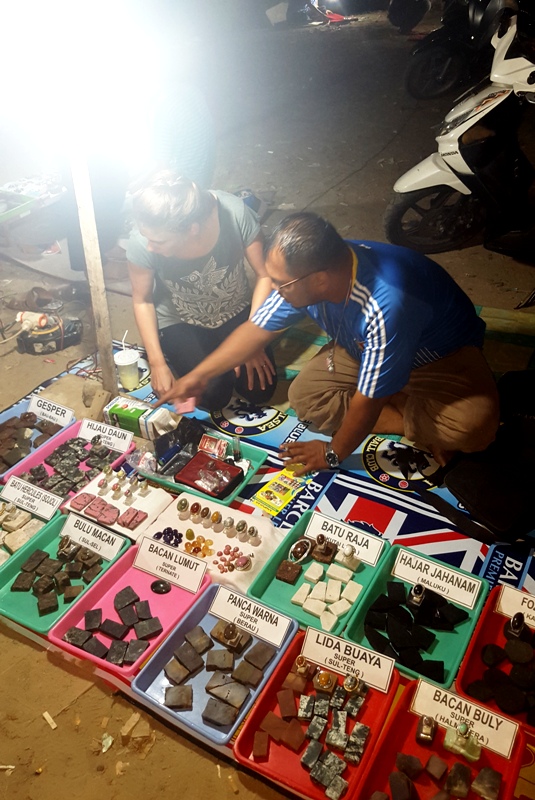 The men asked if I could share the pictures taken on my phone with them, and I told them I’d post them here. So to those friendly men who shared their time and knowledge with us: Kalau anda milihat ini, terima kasih untuk waktu anda dan membantu! 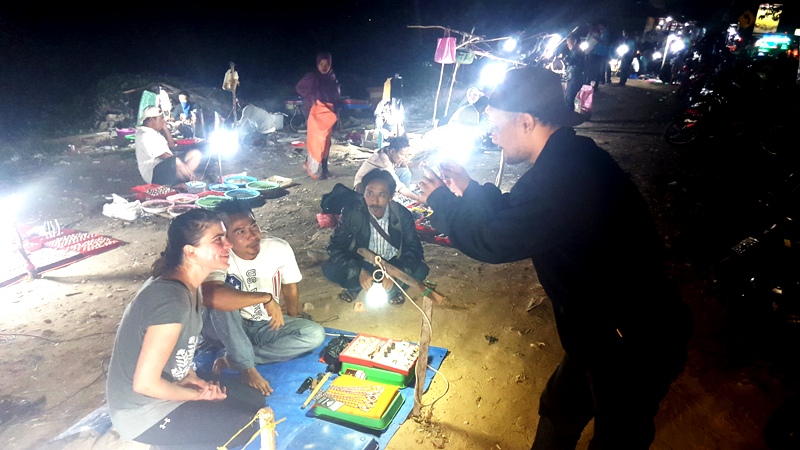 Along this market, stall after stall display stones in various stages of refinement. Some of raw cuts, some polished but still uncut, some cut, shaped, polished and put into rings, while some of the raw stones are displayed in little bins of water so prospective customers can see the rich colors within. The bin-soaking trick is pretty clever, actually, because the water really does bring out striations, colors and depths within the stone that otherwise look rather unremarkable when in its natural, dry form. Another popular way to show of a stone’s beauty is to place a light behind the stone, which then displays characters within. I don’t know anything about these stones — most of which (at least in Balikpapan) are mined in Kalimantan (Borneo) and sold wholesale in a town about six hours south of here called Banjarmasin — but they are quite beautiful. 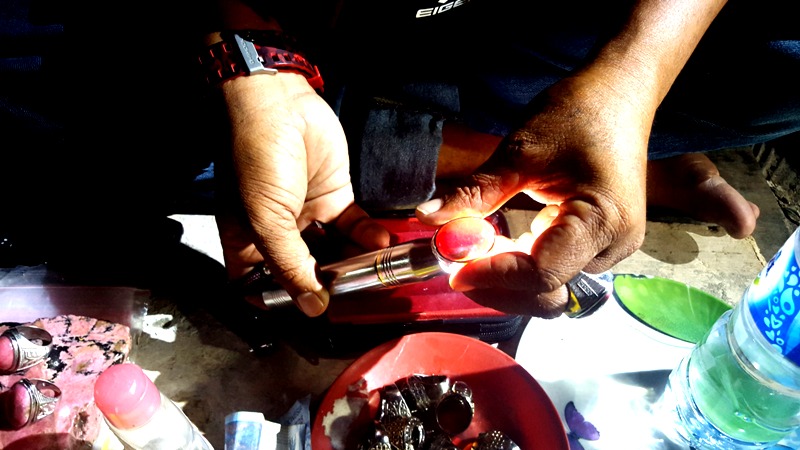 How it works: So, when you visit the stone night market, just peruse the various stalls until you find the mystical stone of your dreams. You can then either purchase a stone already cut and set within a ring or pendant, or you can buy a rock and have it cut, shaped and polished for you on the spot. The photo below shows a man doing just that; the bright jug-lantern looking thing is actually the water tank for his cutting machine! 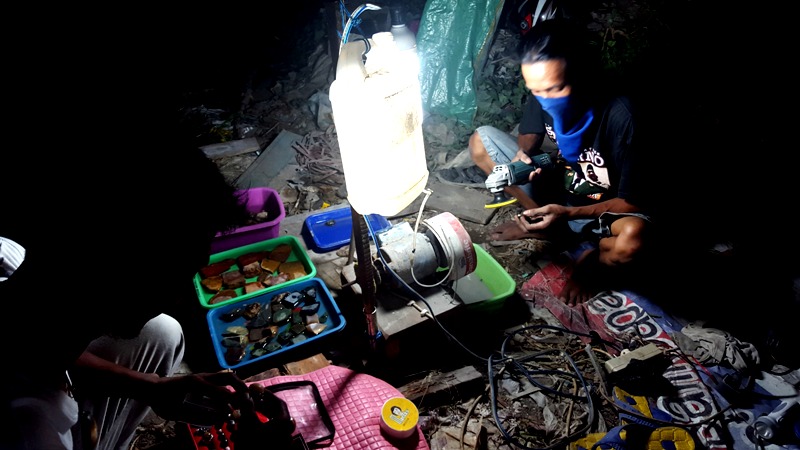 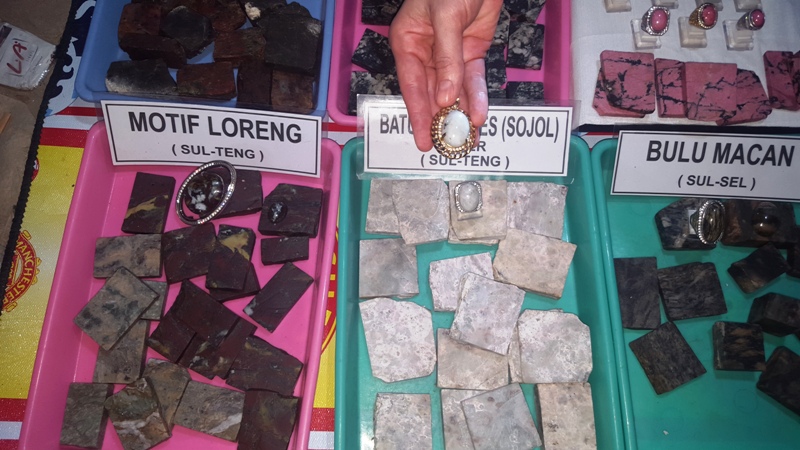 Each type of stone has its own price, but for the pink Batu Borneo Merah stone, the merchant told me an average square cut (like those above) goes for about 200,000 IDR (about 14 USD) and can make about three or four jewelry pieces. If one wishes to have a ring made on the spot, it will run him another 70,000 for a ring along the lines of those below. I didn’t ask, but I’m assuming the silver and gold ring bands are not actually silver and gold! In any case, I don’t know if that’s a good price for a non-precious stone or not, but then again, I suppose one has to factor in the powers it comes with, right? From what I’ve read online, I think the Batu Borneo Merah is what the online-ers refer to as “the pink stone,” which is especially helpful in obtaining a wife. 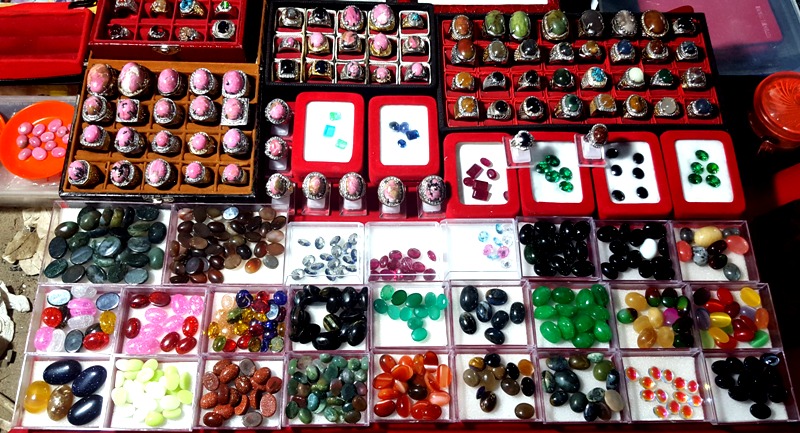 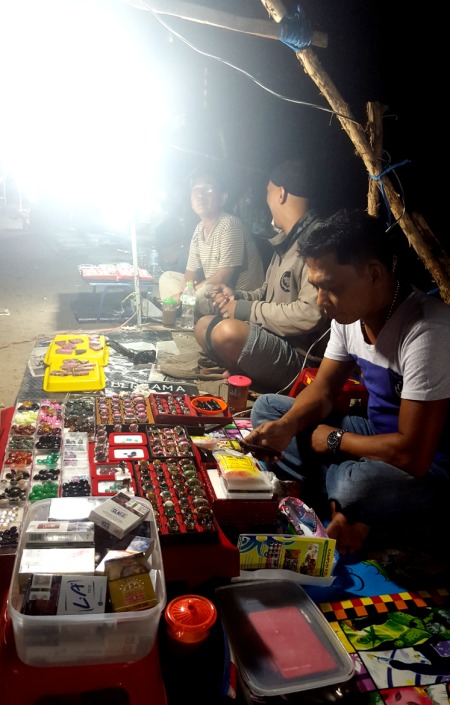 So, if you are ever in Balikpapan and having a bit of lady-love trouble, or perhaps feeling like you need a little boost of something, be it extra energy or perhaps even more wealth, just stop by the night market off Samarinda Road and search for your very own mystical stone! Even if you don’t find the right pesona for what ails you, the stone merchants of Balikpapan are great company. You’ll leave with good vibes, if nothing else!