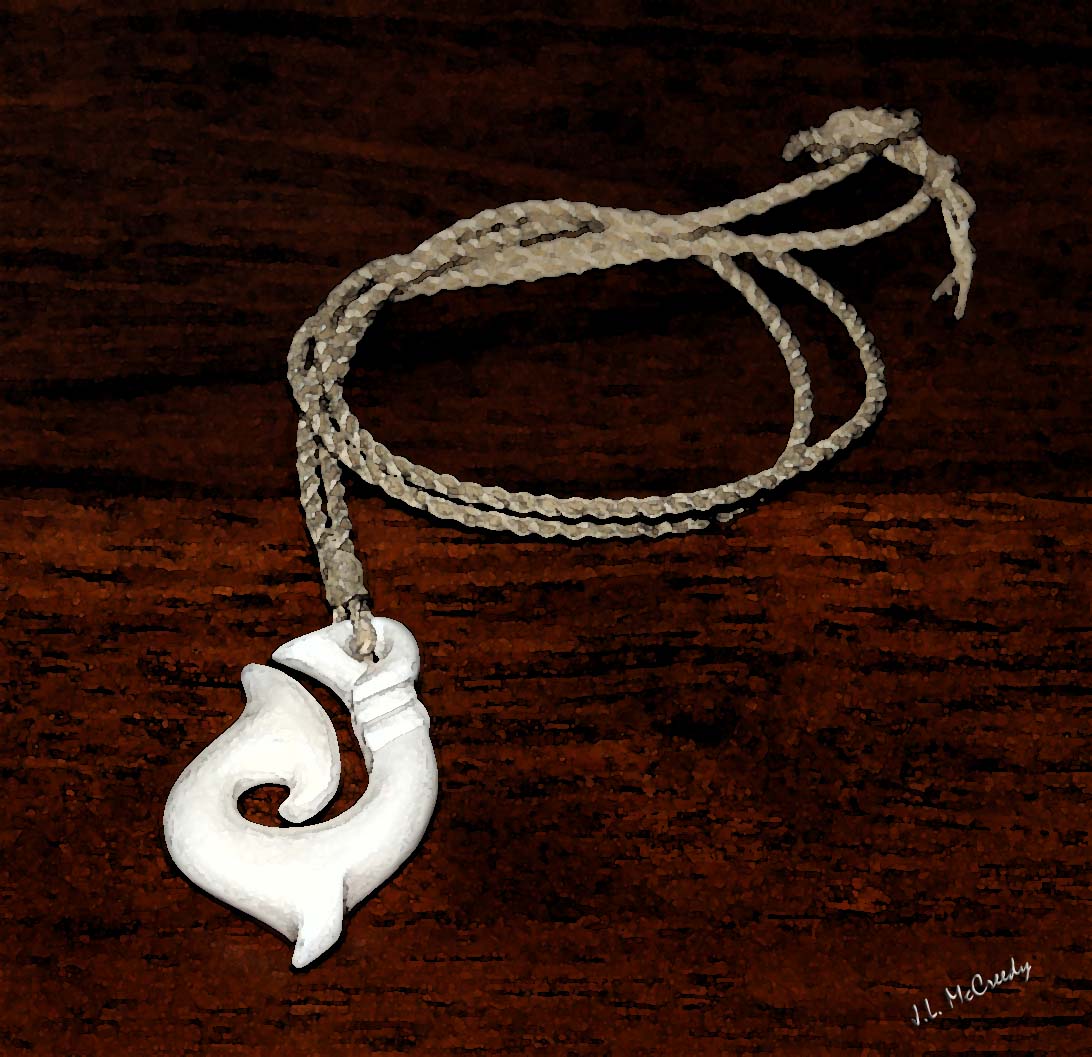 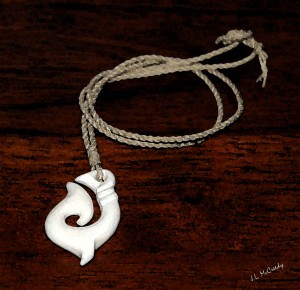 The shape of the fish hook is found throughout Tongan crafts: wood carvings, bone pendants, and the like.  The designs fluctuate somewhat, but inevitably carry a fluid, almost tattoo-like shape, with embellishments placed here and there.

While I always thought the designs were beautiful, it wasn’t until one artisan selling these hooks explained to me the symbolism behind them — that represents an important part of Tongan (and Polynesian) folklore — that I understood their importance.

The legend has to do with Maui, whose identity varies from source to source but is generally considered a god by most (some stories state he was a demi-god with varying tales of his ancestry).  Indeed, Maui legends shift from country to country within the South Pacific, and Tonga is no exception.  Not only do these legends differ slightly between Hawaii and Samoa and Tonga for example, but the written records within each country’s legends differ as well.

For instance, some writings of the Tongan Maui state that he was the god responsible for raising the sky (before then, the sky and the ground hovered so near that people had to crawl on all fours) and the trickster who brought fire to man.  Other sources state that these feats were accomplished by a different Maui — perhaps one of his brothers or even a son of Maui.  One Tongan legend that seems to have relative uniformity, however, is how the islands of Tongatapu, Ha’apai and Vava’u were created.  And that legend goes like this:

One day, Maui obtains a fish hook from an old fisherman named Tongafusifonua. Naturally, Maui decides to go fishing.  He drops his hook into the sea, but when he tries to pull up the line, it seems to be caught upon something.  Maui tugs and tugs until his hook appears once more, but with it also comes an island!  Well, Maui knows a good thing when he sees it, so he keeps throwing his hook into the water until the main islands of Tongatapu, Ha’apai and Vava’u are all pulled from the ocean.  (Eua and some of the smaller volcanic islands were created separately by the god craftsman Tangaloa whose wood shavings fell from the sky.)

At any rate, Maui names the largest island “Tonga” in honor of the old fisherman, and that island is now Tongatapu of course, where the capital city Nuku’alofa sits.  But he isn’t done yet!  He grows so delighted by his success that he continues fishing, eventually pulling up most of the islands of Tonga, as well as — depending upon the legend source — some of those in Hawaii, Samoa and Fiji.

And that is the story behind the Tongan fish hook.  After learning more about it from digging around online, I realized that the little carvings purchased at the market stalls have more than one kind of symbolism.  Because not only does the fish hook represent the creation of Tonga, the varying designs found from artisan to artisan show the complexity of the tale itself; of how a story as important as the beginning of this land has different styles to it, different articulations — even different accounts as to the identity of Maui himself.  In short, the hook’s final shape depends upon the maker, just as a legend’s account depends upon the teller.

At first, this understanding that I would never discover the one, “real” story of Maui frustrated me.  I spent hours looking into accounts from old scanned books, ledgers, websites and bloggers alike, but no uniform telling of Maui would ever manifest.  But after thinking it over for a while, I suspect that’s how legends should be: ever-morphing, just as is the land and the people who possess it.  Because legends, like any belief, can never be uniform.  It depends upon the holder of them, the way the idea forms to each person’s mind, endless with possibility.

So now, when I don one of those nifty designs around my neck,  I’m seeing so much more than a beautifully carved pendant from Tonga.  I see a symbol of life itself; a philosophy that my voyage is unique and beautiful, as is everyone’s, and that each day is a possibility, that every effort made is a hook thrown into the water.