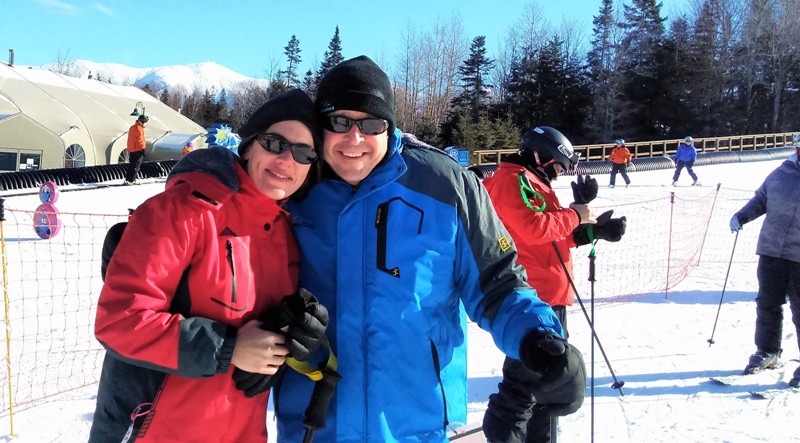 Having grown up in Southeast Asia, then attending my higher education in the southeast of the United States, it is fair to say I know nothing about snow. Except that it’s cold. And pretty. And it always makes me think of Narnia.

But gliding over the surface of said material at unnatural speeds courtesy of two blades protruding from one’s feet and eyeball-skewing sticks clutched in icy death-grips? Well, that’s an experience I’ve had little chance to acquire….

Sam and I recently made the mind-warping move from Balikpapan, Indonesia to the White Mountains of New Hampshire. Along the way, we’ve experienced several adventures — including dodging a sketchy contract deal in Guam and having our household goods held hostage from an Indonesian shipper claiming to have had his business account hacked — but none of those were particularly fun. No, really. So not fun.

So, FINALLY, after a few months of feeling generally bewildered and bamboozled, we settled upon a great opportunity in the beautiful White Mountains, began our house-hunting and signed up for a ski lesson. I mean, what’s the point of living in the mountains if you don’t know how to ski?!

And our White-Mountains-move seems kissed by fate, because, turns out, the entire month of January is a nation-wide initiative designated as Learn-to-Ski-and-Snowboard Month!

Now, here in the White Mountains, there are more ski resorts than you can shake a pole at. All within thirty or so minutes’ drive! But what sets Bretton Woods apart (aside from its numerous accolades) is its FREE Learn-to-Ski-or-Snowboard program that started on January 8, 2017 and runs until January 13, 2017. After the thirteenth, the same Learn-to-Ski-or-Snowboard program continues until the end of January, but at the rate of $39 a person. Still a bargain, in my opinion, but a few other resorts offer similar packages for the same rate, so you might want to shop around.

This learn-to-ski program includes a group snowboard or ski lesson, rental equipment (skis, poles and boots or snowboard and boots — helmets are rented at an additional cost) and an all-day lift pass at the learning center quad. The quad, in turn, includes about three inter-connected bunny slopes accessible by magic carpet and/or chair lift. Su-weet!

And the best thing is, since we’re close, there’s no waking at the crack of dawn to drive two hours to a Disney Land-like parking area, stumble through the masses, then groggily sign in. Nope. We’re about 40 minutes away from Bretton Woods, so our ten o’clock in the morning ski lesson fit in perfectly! And while the parking lot and sign-in areas were moderately busy, it was still nothing like what I’ve observed at ski resort areas in Colorado … or the one time we tried to learn to ski in China. 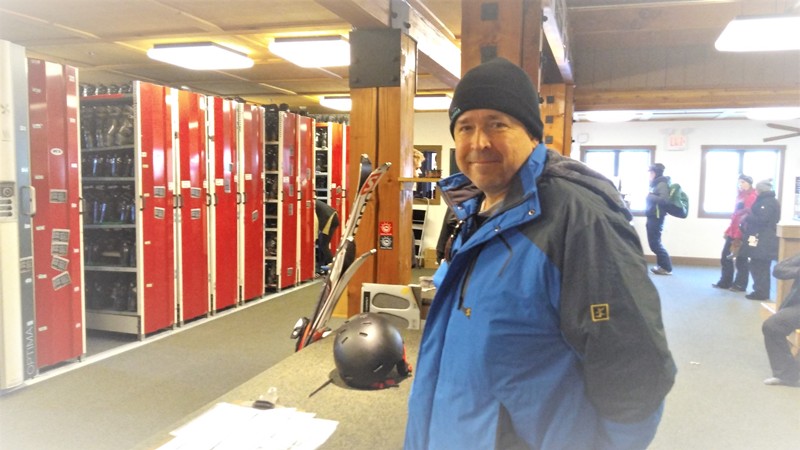 Now, for those of you who, like me, may be intimidated at the prospect of learning to ski (especially if you’re aged 30 or above), I have this to say:

And while we were probably the oldest students in the class, I was told by the super-friendly reservation lady that they’ve had 80-year-olds sign up in the past, which did allay my fears somewhat. As for the instructors, they were friendly, patient and encouraging. Also, it might be of interest to know that the class was taught using “short skis,” AKA “ski blades” which are much shorter than regular skis and easier to learn on. Also, they kind of look like cute Popsicle sticks, so that really takes the intimidation factor down. 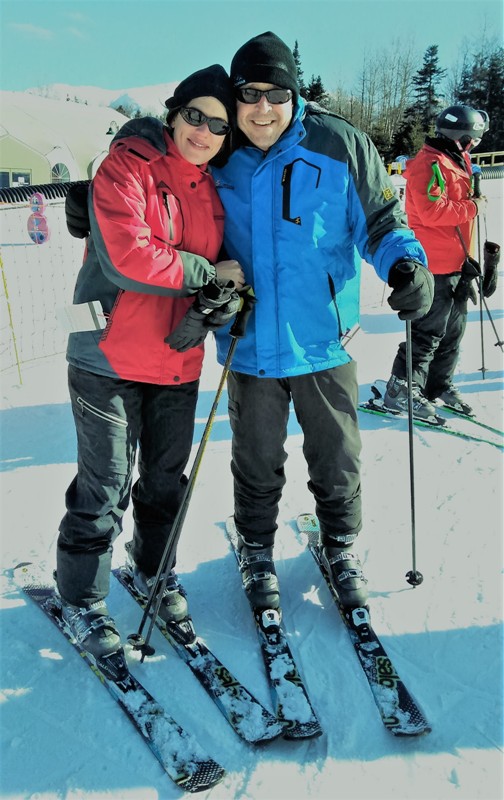 So what did we learn?

Just the basic stuff, really: How to balance, mount and dismount from skis, how to get up when you’ve fallen, how to slow down, how to climb uphill on your blades, how to go downhill (obviously — but the learning center has gentle bunny slopes, so never fear), how to turn/negotiate objects and how to mount and dismount the chair lift. For this latter skill, they start you off by taking you on a “magic carpet” which is more or less a conveyor belt that takes you up a hill. The below picture shows Sam as he’s just getting off the magic carpet. 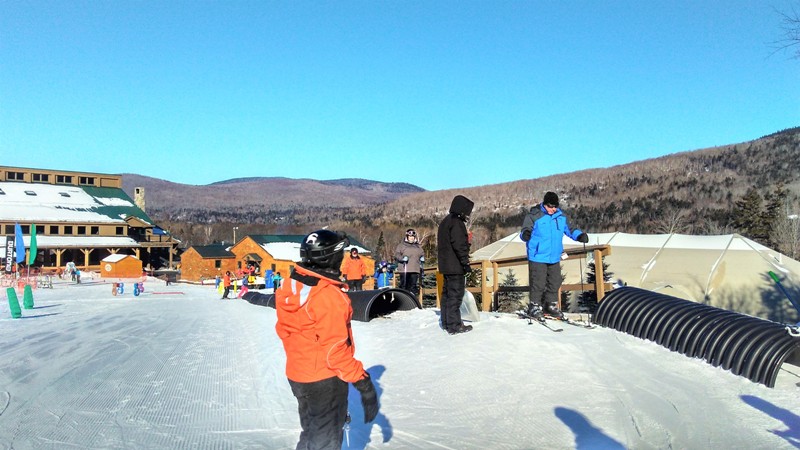 Once you’ve got that mastered (and can get down the hill!), then they show you the ropes on the chair lift. Now, this part was very important to me because years and years ago, I had a traumatic experience in Colorado when I attempted to learn how to snowboard with family members who already knew how to ski … but I didn’t.

This foray ended in disaster, largely because the learning experience in Colorado was nothing like that at Bretton Woods. Without besmirching the Colorado snowboard instructor too much, I’ll just say that he was a moron. And also, he never even mentioned the art of negotiating a chair lift … or the fact that, at the end of the chair lift ride, they don’t stop to let you wobble off at your own pace, but rather expect you to leap off your chair lift and land several feet below with a snowboard snapped to your foot. Anyone else out there have this happen?

In any case, our experience at Bretton Woods was the antitheses to my Colorado snowboarding gone awry. The instructors here were awesome and walked us through the whole process. Also, dismounting from the chair lift was a lot less scary as, at the learning center, it more or less meets the top of a gentle slope, so no leaping in the air required, thank goodness!

So, that’s pretty much our experience learning to ski at Bretton Woods. I forgot to mention that the rental folks said that if you’d rather switch to regular skis after the lesson, then that option is available for the more adventurous. For us, after our hour-plus lesson, we just played on the learning slopes for a few hours with our short skis. Lots of fun!

One thought on “Learning to Ski at Bretton Woods, NH”