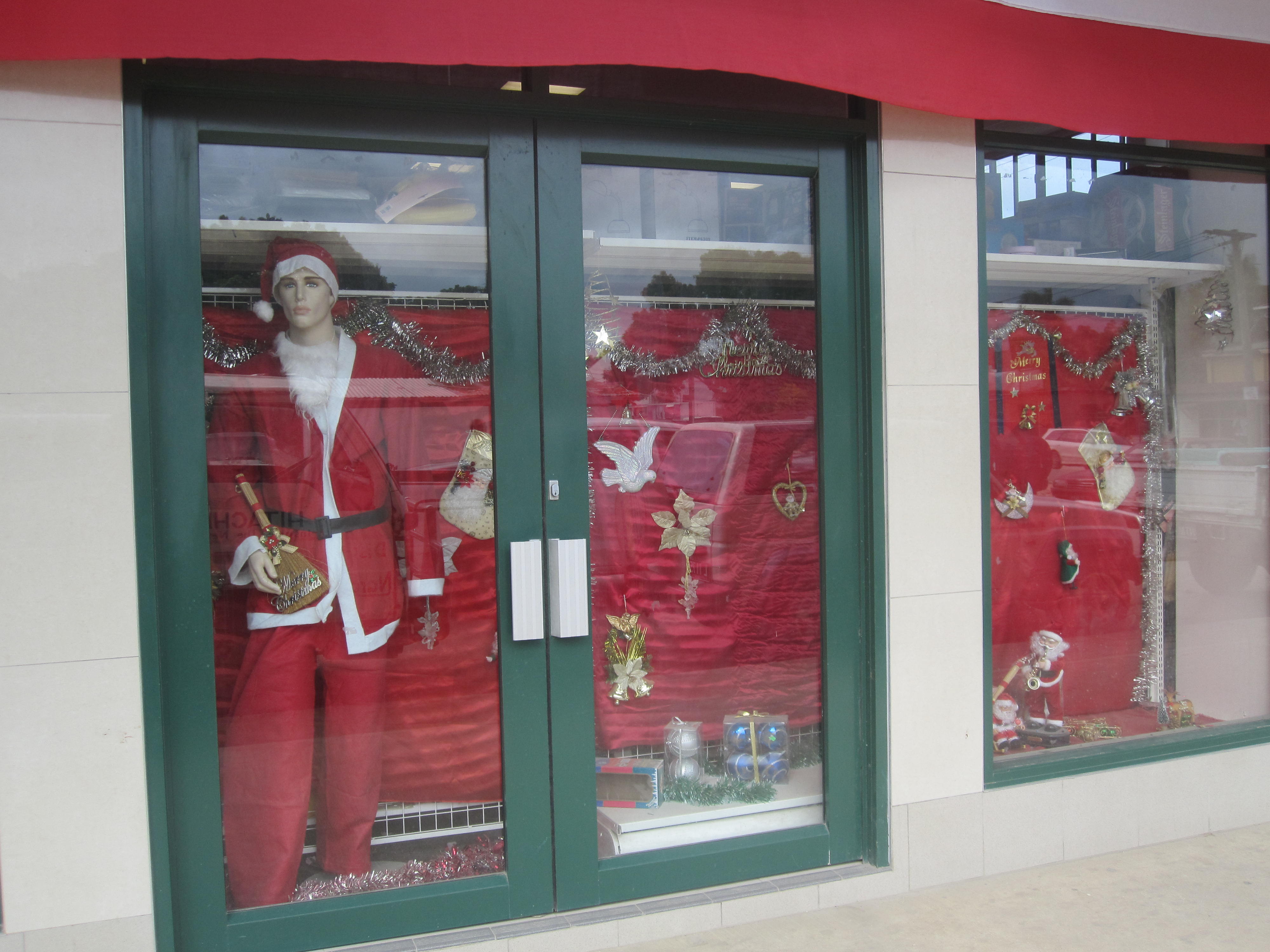 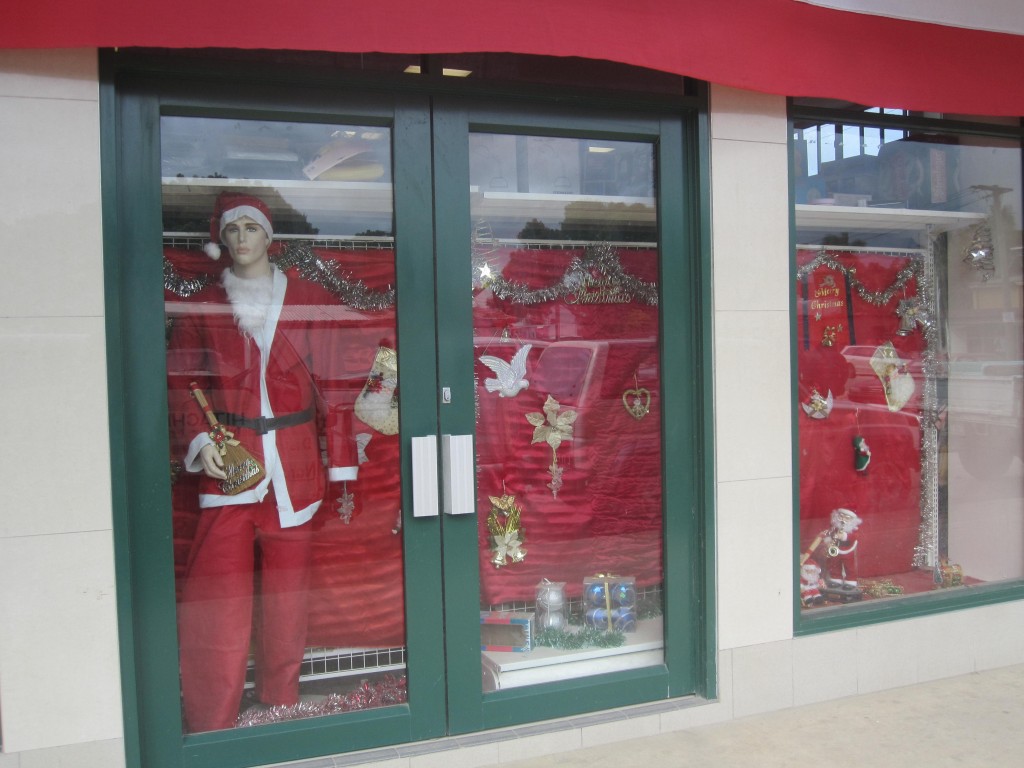 Christmas in Tonga is refreshingly un-materialistic   Sure, there are the simultaneously bizarre, yet amusing store fronts dotting the dusty strip of downtown Nuku’alofa, and families often shop for a gift or two for the children, but otherwise, Christmas is all about family, church and community (and a little Christmas Eve bingo, natch). 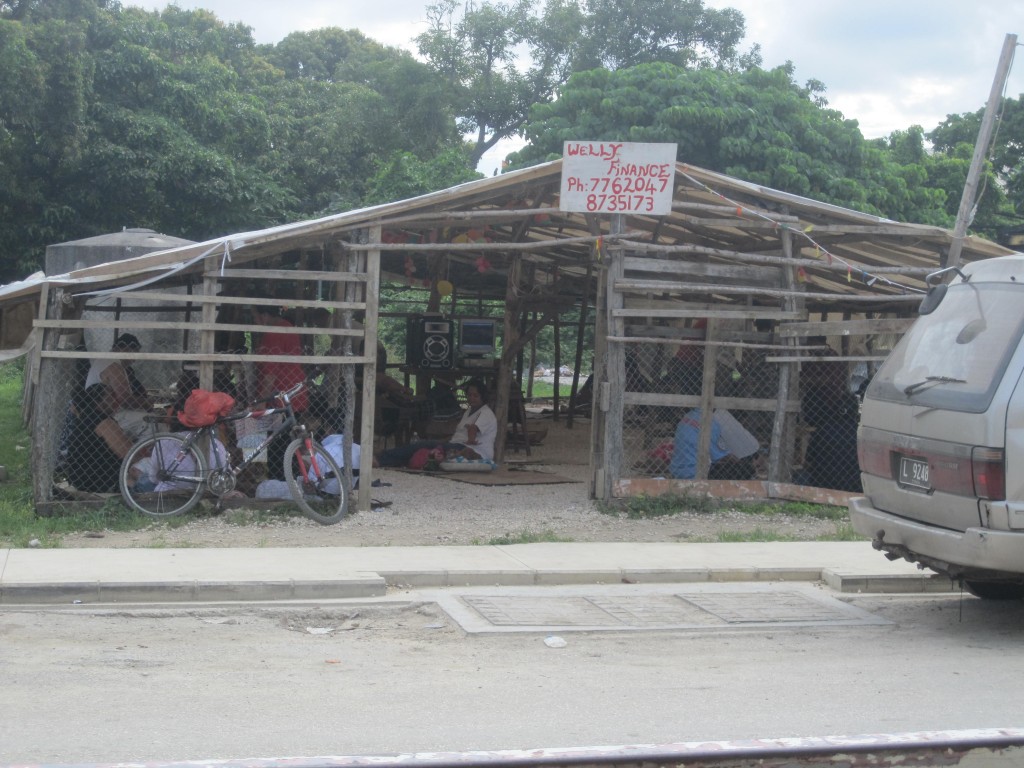 An interesting addition to this otherwise low-key holiday is the procurement of (possibly factory reject?) fireworks sold all along Vuna road for the month leading up to Christmas.  We discovered yesterday (Christmas Eve for us) that Tongans absolutely love fireworks, and the night boomed and whistled with conflagrations until late in the evening, possibly only cut short by the torrential storm that split apart the skies at around midnight and raged on for hours.  Sam and I wondered if the fireworks had anything to do with that. 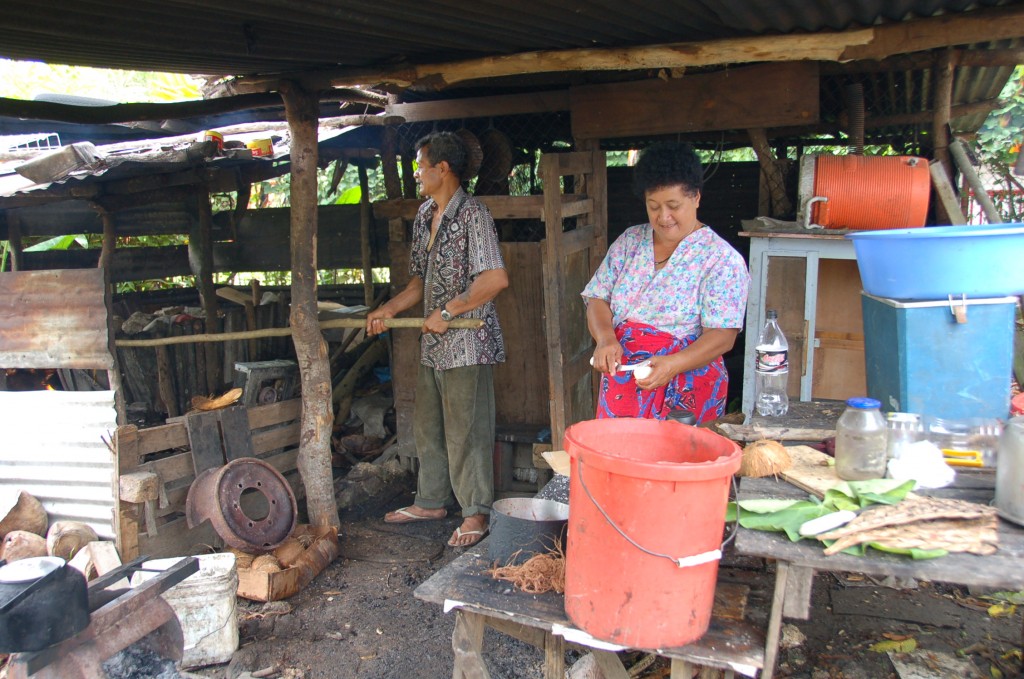 After a relatively sleepless evening, we awoke and began our preparations for the day, to wit, baking cookies for the picnic our neighbors had invited us to join.   We were pretty excited, because Kaloni and her husband Mavae were doing an Umu (underground oven) for the occasion.  I ran next door to snap some pictures, but Kaloni had already completed the Kapapulu Lu (corned beef packed in coconut cream and taro leaves, then baked in banana leaves inside the Umu). 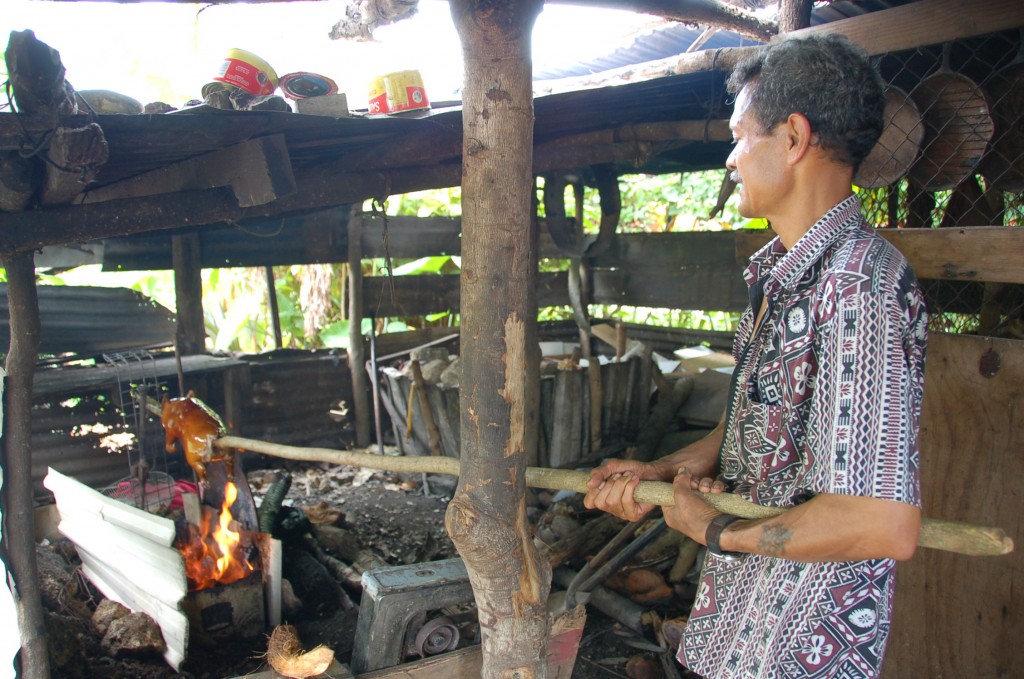 Mavae, on the other hand  was busy at the spit roasting their suckling pig!

A few hours later, Mele, their oldest daughter, called my name until I came to the door.  Now, in Tonga, people generally don’t use phones or door bells, they just stand outside and call your name over and over until you make an appearance, which I did.  She  announced everything was ready to go, so Sam and I scrambled to shove our inflatable kayak bits and pieces into our car, grabbed our beach things and cookies and set off after Mele’s family. 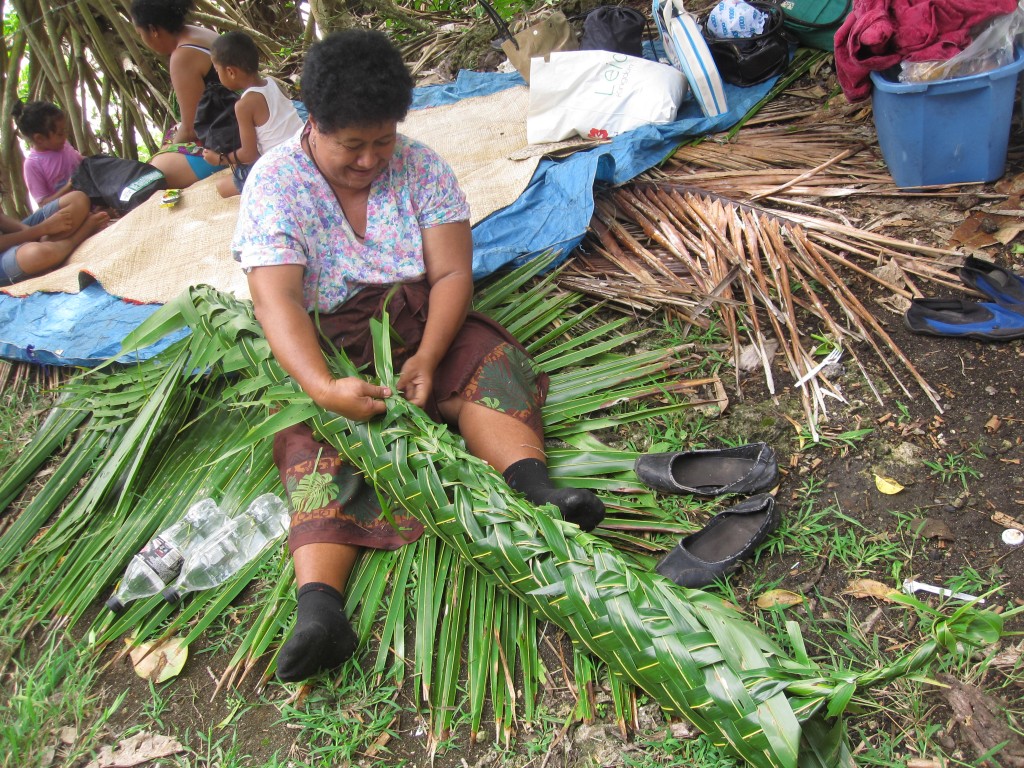 Our picnic was at Vaitongo Beach, supposedly just next to the elusive “bird park” that  we have never been able to locate, and when we got there, it was packed out!  We only arrived a few minutes after our neighbors, but Kaloni was already hard at work, weaving a traditional basket to set the food on.  I watched, fascinated, as Kaloni wove the leaves of one enormous coconut frond, transforming its leafy fingers into a long (probably six feet) braided tube, all in less than ten minutes! 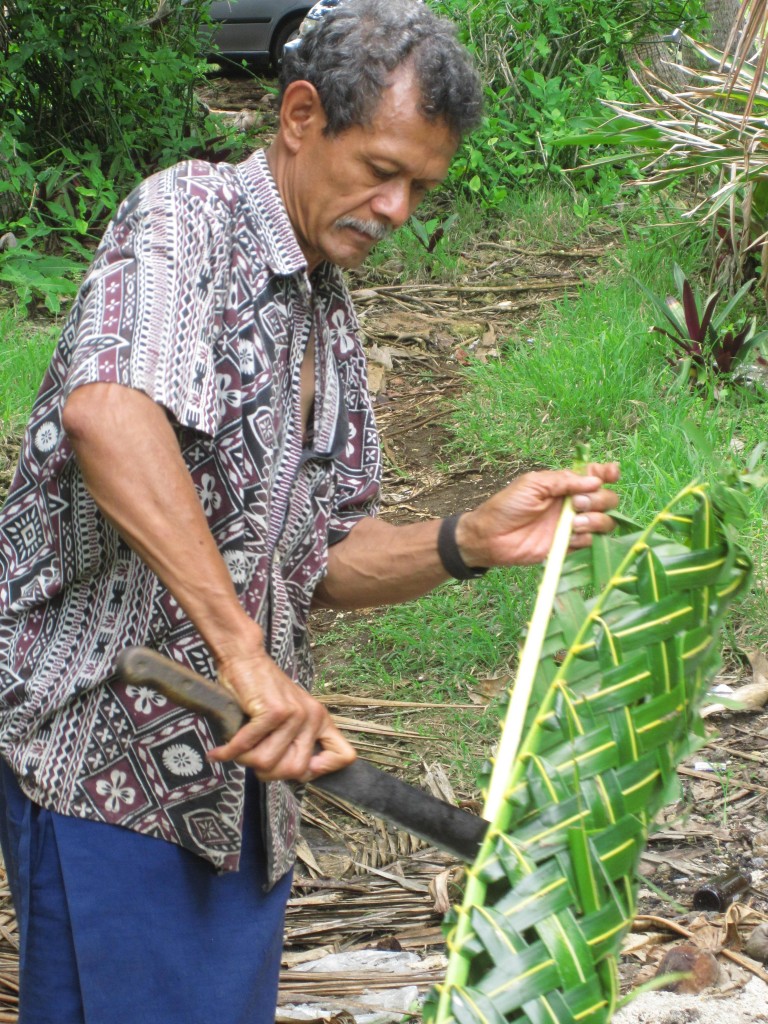 Mavae then sliced the palm spine of the tube with a machete, producing a perfectly rounded tray to hold all of our picnic edibles!  Banana leaves where then placed over the basket to hold the food and then dishes were placed on top.  Traditionally, these dishes would be placed directly on the banana leaves, but since everything was already in plates and containers, Kaloni set our table Palangi-style. 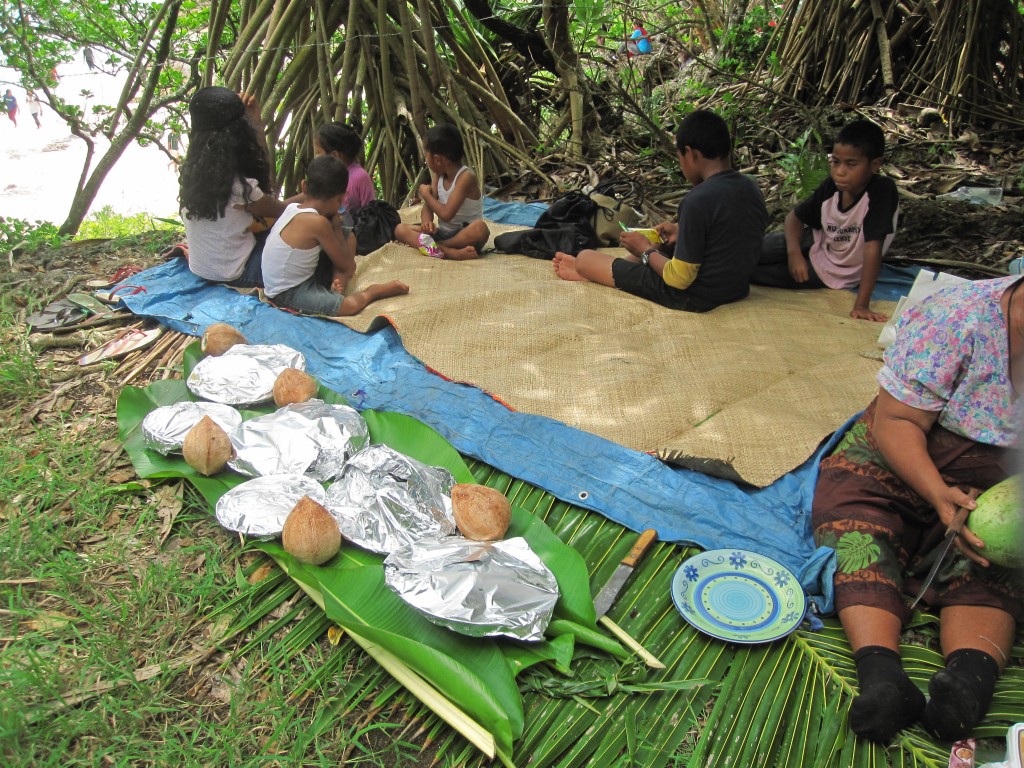 And this is what they had whipped up in a course of three or so hours!  Boiled Ufi (yam) and Kumala (a type of sweet potato), roasted suckling pig, barbecue chicken and hot dogs, cut watermelon, fresh pineapple and a Tongan chicken. 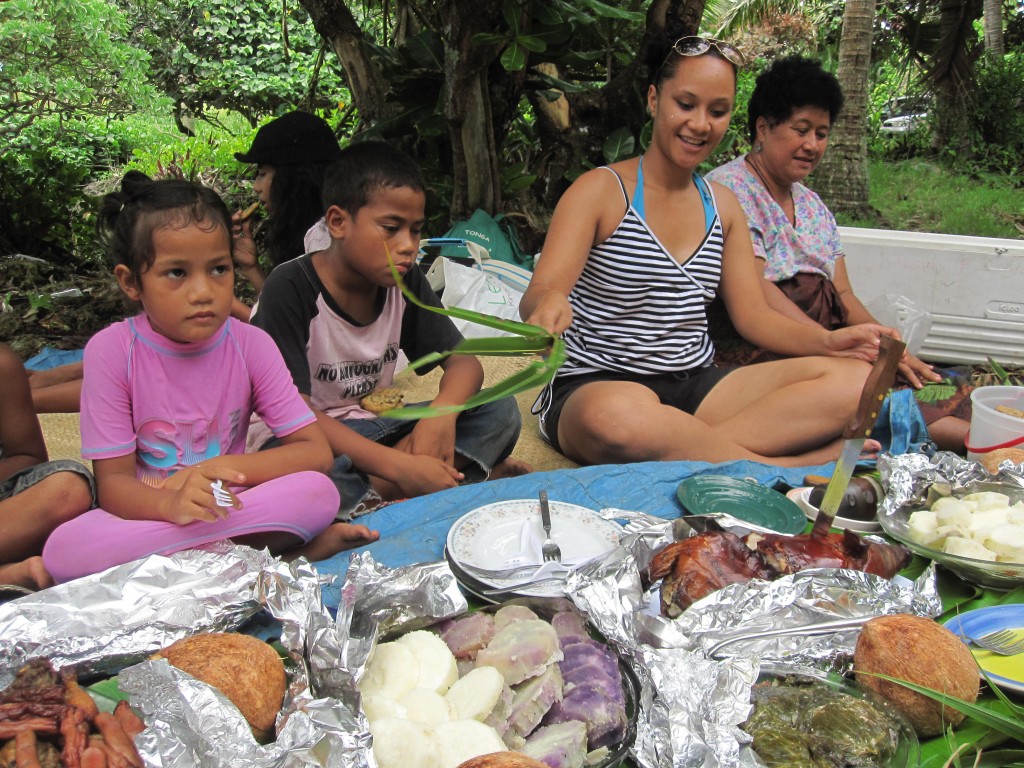 This last item was amazing: baked in coconut cream and onions, dressed with stuffing made from crackers, onions and garlic — truly delicious.  But I didn’t understand that what they meant by “Tongan chicken” wasn’t that the chicken was cooked with Tongan ingredients, but rather, that it was literally a Tongan chicken.  More specifically, one of the hens that cluck around our yard every day! 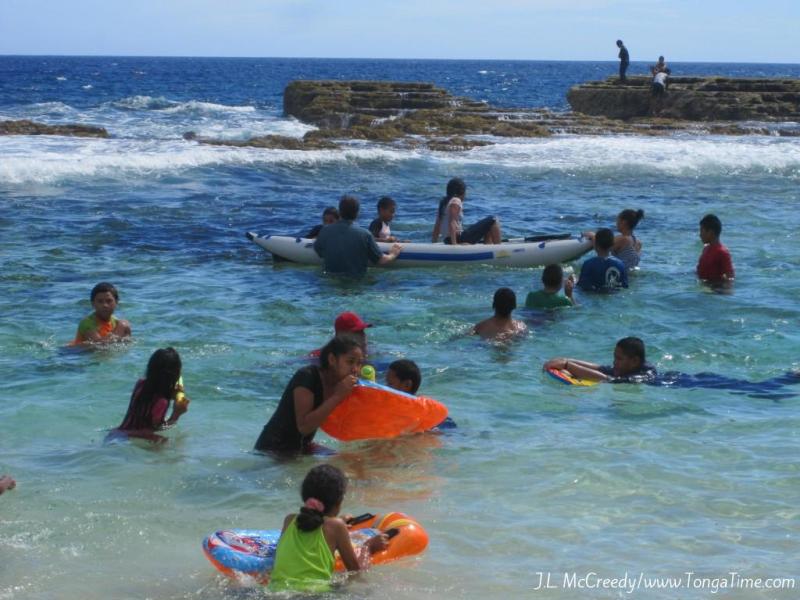 After eating, the kids all went for a swim while Sam and I inflated our Sea Eagle kayak and took turns dragging the little ones about in the water.  The kayak was a huge hit; all the kids at the place wanted a turn in it! 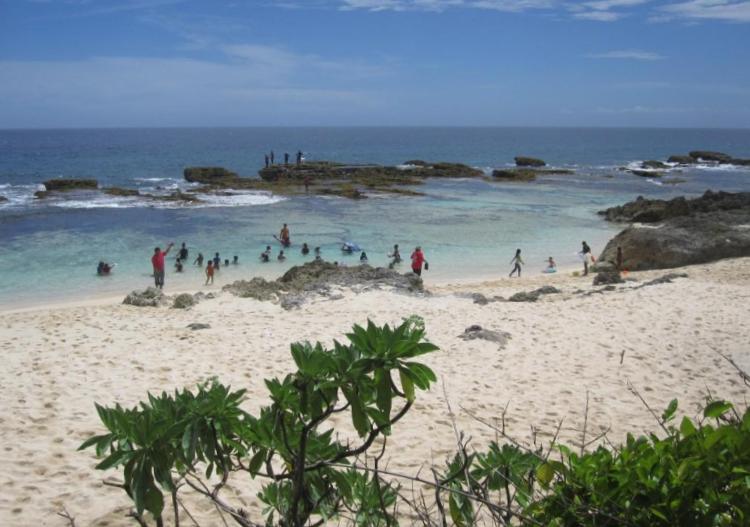 After a few hours, we dragged ourselves from the sea and packed up to go home, glowing from the fantastic time as much as from our sunburns.  Kaloni promised to hold a cooking class next week to teach her daughter Mele and me how to make her fantastic Lu, and then handed us a plate full of leftovers and two shucked coconuts for the evening.  Seriously, could Christmas get any better than this?

It is now 8:30 in the evening on Christmas and a few fireworks pop in the distance.  Sam and I thought it would be fun to watch It’s a Wonderful Life to wrap up our perfect day.  I’d obtained the DVD yesterday from a shop in town wrapped, as DVD’s are in these parts, in a piece of folded paper stapled together.  “It’s a Wonderful Life,” is scrolled reassuringly across the DVD surface.  Sam puts it in while I sit at my computer, and a minute later, I hear him laughing.

I do, hopping from my station to the adjoining room, now glancing from Sam to the television.  And then, I see the source of humor:

Instead of Frank Capra’s classic Christmas tale announced across the screen, there is a movie that, judging from the title at least, deals with another type of tale (or more specifically tail) altogether, followed by two massage … er, instructional presentations.

4 thoughts on “Kilisimasi Fiefia! (Or a Very Merry Tongan Christmas)”