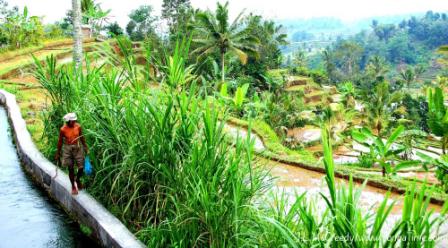 The Jatiluwih rice fields of central Bali are a stunning destination, and a wonderful reminder that there is more to the Island of the Gods than parties, shopping and beaches.

The Jatiluwih rice fields also happen to be part of a UNESCO World Heritage designation celebrating the Balinese Subak System. Indonesia thus far has eight UNESCO World Heritage designations (the fabulous Borobudur temple and Prambanan complex being two of them), and the Cultural Landscape of Bali Province: The Subak System as a Manifestation of the Tri Hita Karana Philosophy is the most recent (achieving designation in 2012). It’s also a mouthful and kind of complicated to explain.

But the thing that really differentiates this UNESCO designation from others in Indonesia is that it isn’t an actual place; rather, the designation is assigned to the manifestation of a philosophy called Tri Hita Karana. 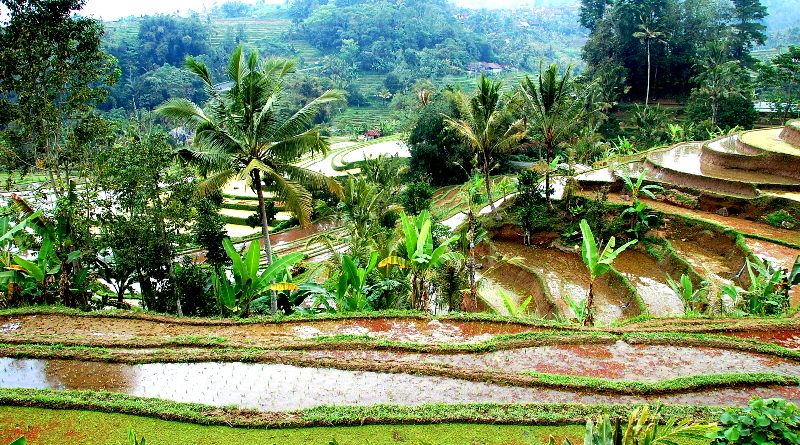 If I’m understanding things correctly, this philosophy is more or less about the cooperation and synergy between the spiritual realm, human/societal interaction and nature. As rice is considered given by the gods, and water is necessary to sustain it, the irrigation and water temple systems of Bali were developed to manage these resources in a harmonious and sustainable manner. The irrigation for Bali’s rice terraces are designed so that water first flows through the numerous water temples before channeling into the fields themselves. To quote from the UNESCO site:

“Subak components are the forests that protect the water supply, terraced paddy landscape, rice fields connected by a system of canals, tunnels and weirs, villages, and temples of varying size and importance that mark either the source of water or its passage through the temple on its way downhill to irrigate subak land.” 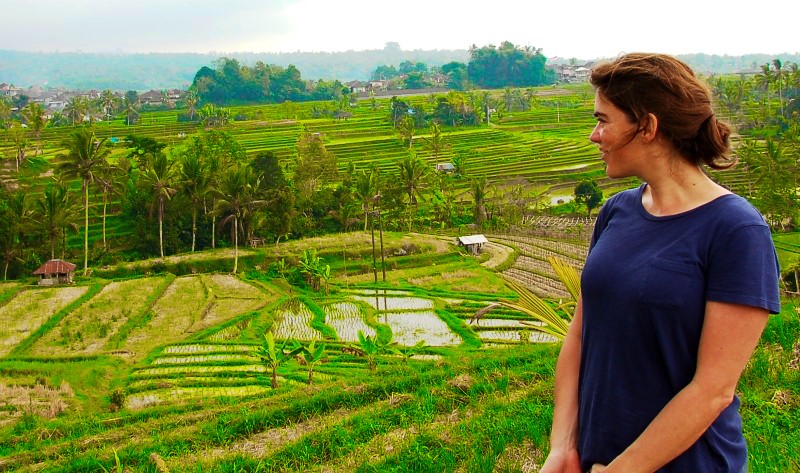 The Jatiluwih rice terraces are one of the five (though UNESCO says five, I only counted four actually named) sites in Bali where this principal is demonstrated. 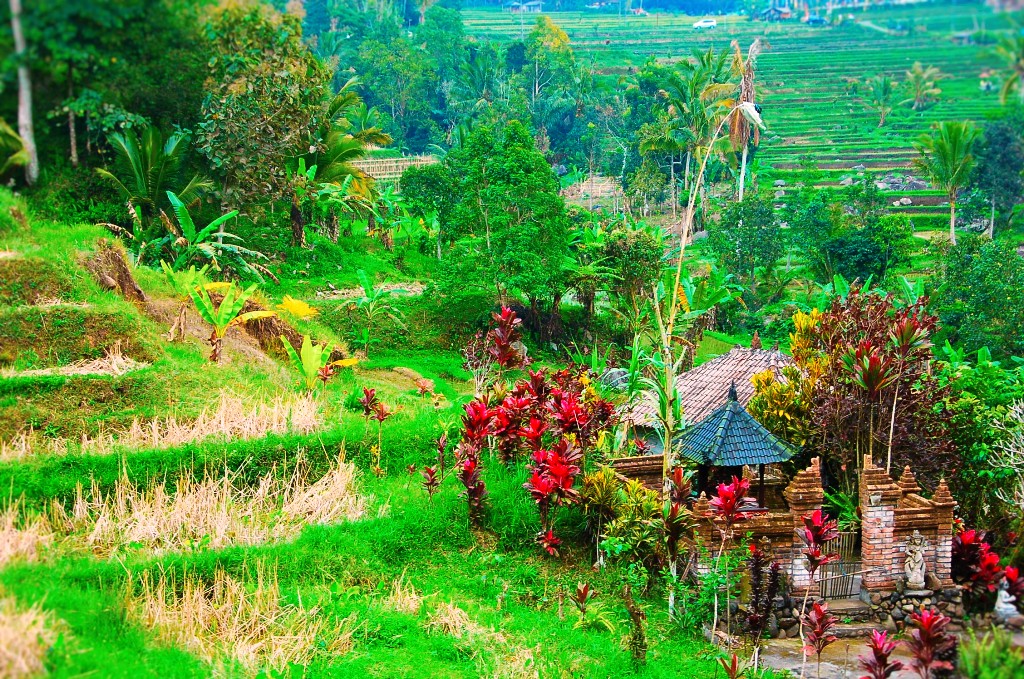 One of the water temples incorporated into this system is Pura Ulun Danau Bratan, where we stopped on the way to Jatiluwih from the mountain town of Munduk. We weren’t quite as in awe of that bali temple — mostly due to the crowds and what we considered some misrepresentation as to it sitting on islands “surrounded by the lake” … not! But Pura Ulun Danau Bratan is a nice stop to make, if for no other reason than to get a better grasp of the importance of water temples in Balinese culture.

But back to the rice terraces. 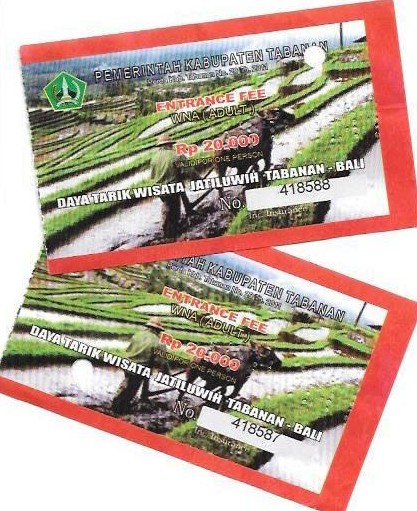 How to get to the Jatiluwih rice fields:


The map above shows Bali’s main touristed areas to the south (marked in red) with our own little tour of north Bali indicated elsewhere. Jatiluwih sits pretty much in the middle of Bali (marked on the map by binoculars), with winding roads going to and from as it is surrounded by mountains and volcanoes. Hired car or motorbike are how most people reach the area, though some public buses trundle up the main road from Denpasar. Due to its location, it’s a great destination to combine with others in a day trip. For instance, we were driving from Munduk to the north down to the airport area, so we stopped at the twin mountain lakes of Tamblingan and Bayan, then to the temple Pura Ulun Danau Batur, then the Jatiluwih Rice Paddies, then to the forested temple of Pura Luhur Batakau before making our way south to the airport.

From the south, the trip is under two hours from the Kuta area (in decent traffic, that is). While there is a parking/lookout point from the main road where you can take some scenic photographs, in our opinion, the best way to experience the beauty of the rice terraces is to follow the main road into the tiny town and pay the 20,000 Rupiah entrance fee to walk amongst the fields. The entrance is a little guard-stand area to the left side of the road, opposite from the various stalls and restaurants. Vehicles usually park by the string of small restaurants the line the road just beyond the entrance area. 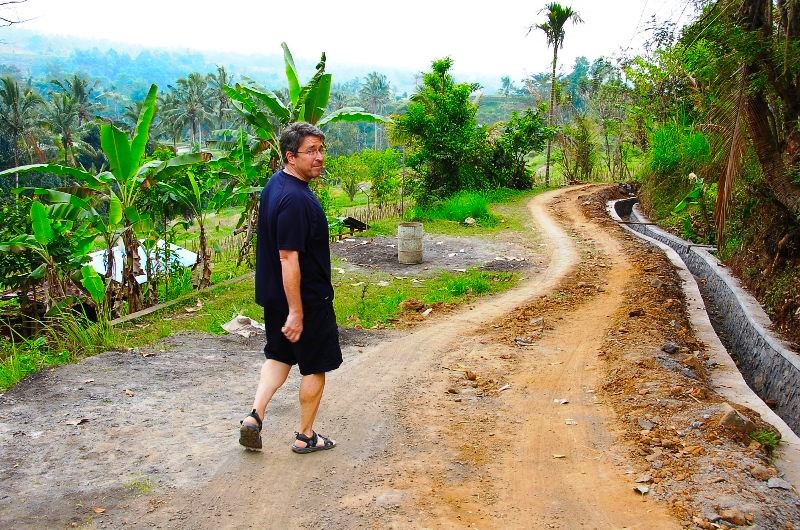 The photos above show the walking trail winding through the fields. You can follow this, or step off at any point onto the little foot trails that weave between the terraces. Everywhere, you’ll see beautiful fields and little altars decorated with saffron sashes, wooden stables in the middle of terraces where mocha-hued cows peacefully chew their dinner, and field workers winding between paths with woven baskets. It’s a wonderful place to spend an hour or two, just walking around. 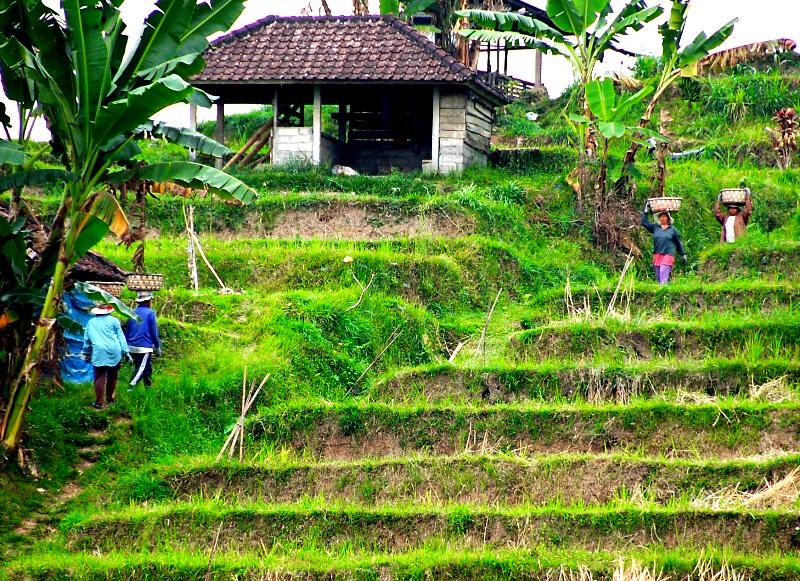 Another aspect of the subak system, is that these beautiful fields of rice are cultivated in a traditional manner, without pesticides or chemical fertilizers! 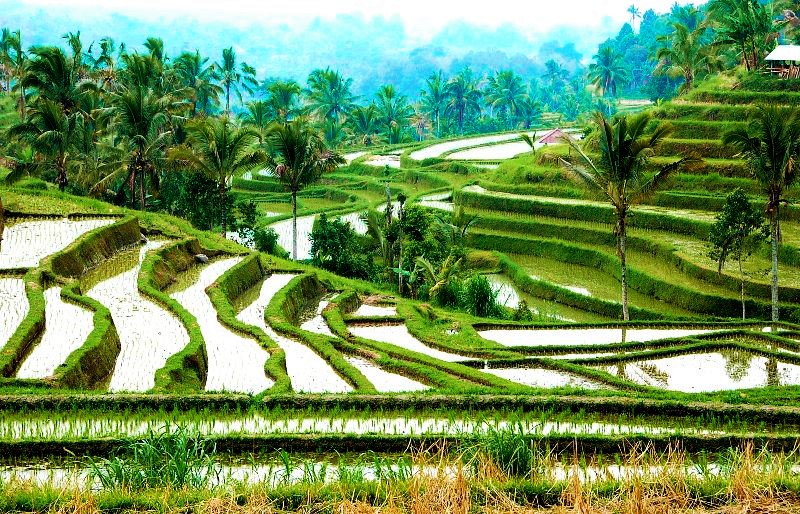 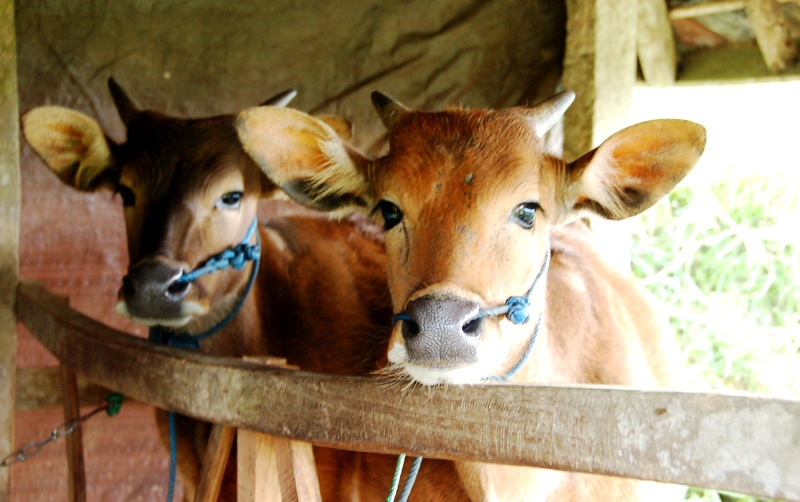 When you’re done, you can follow the marked path back, or take one of the locally-used footpaths back to the main road above, where restaurants sell all sorts of dishes featuring their locally grown rice. Red rice is especially celebrated here, and even if you don’t want to eat, you can still buy a little bag of red rice grains for later. 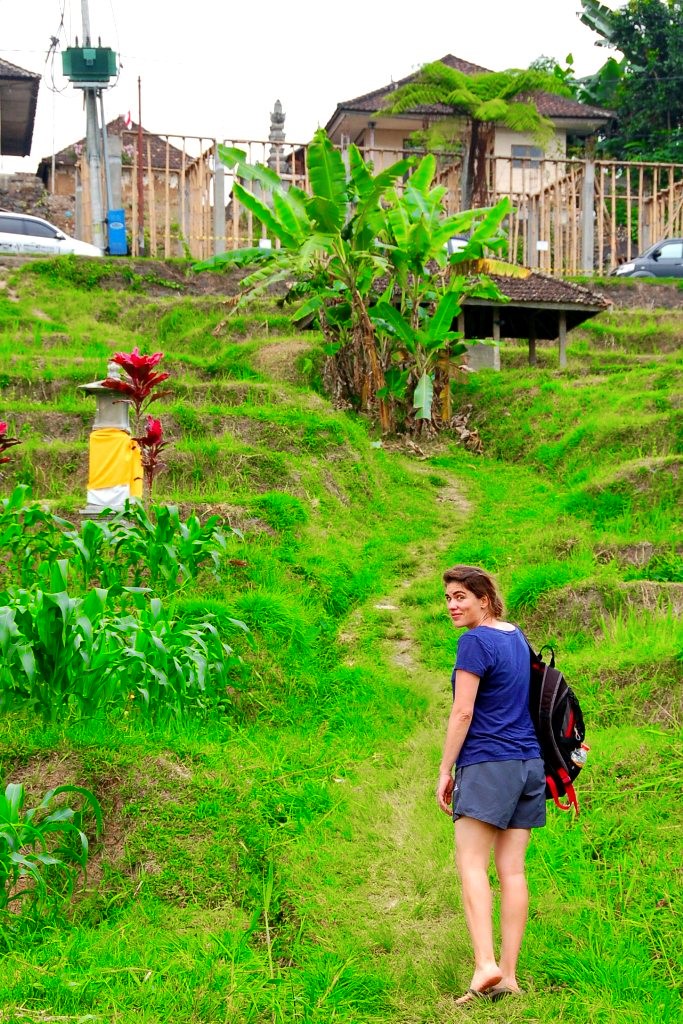 That’s our tour of the Jatiluwih rice fields! I think it was one of our favorite places in Bali.