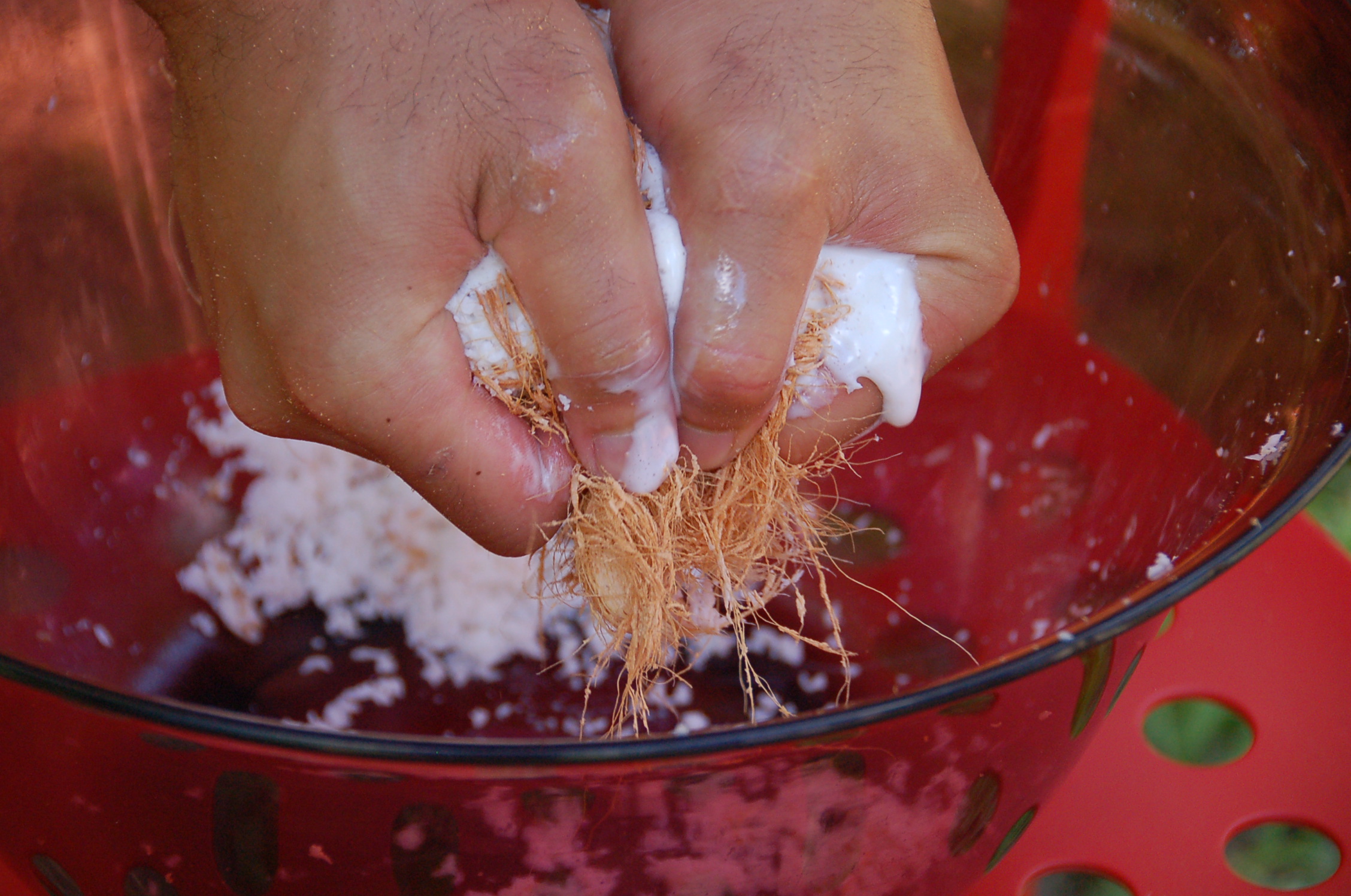 This is a follow-up to the previous post where Toni showed us how to climb a coconut tree. Here we’ll learn how to make coconut cream from scratch, so without further ado:

Toni said a sharp stick, jutting from the ground, is normally used, but for convenience sake, he utilized the tip of the hakalo (the coconut grater) instead. Holding that thing up while the husk is split apart — like Amy is doing here — is harder than it looks, but the girl’s got muscle. The coconut is rotated and the husk split off until the fibers are completely separated from the shell. 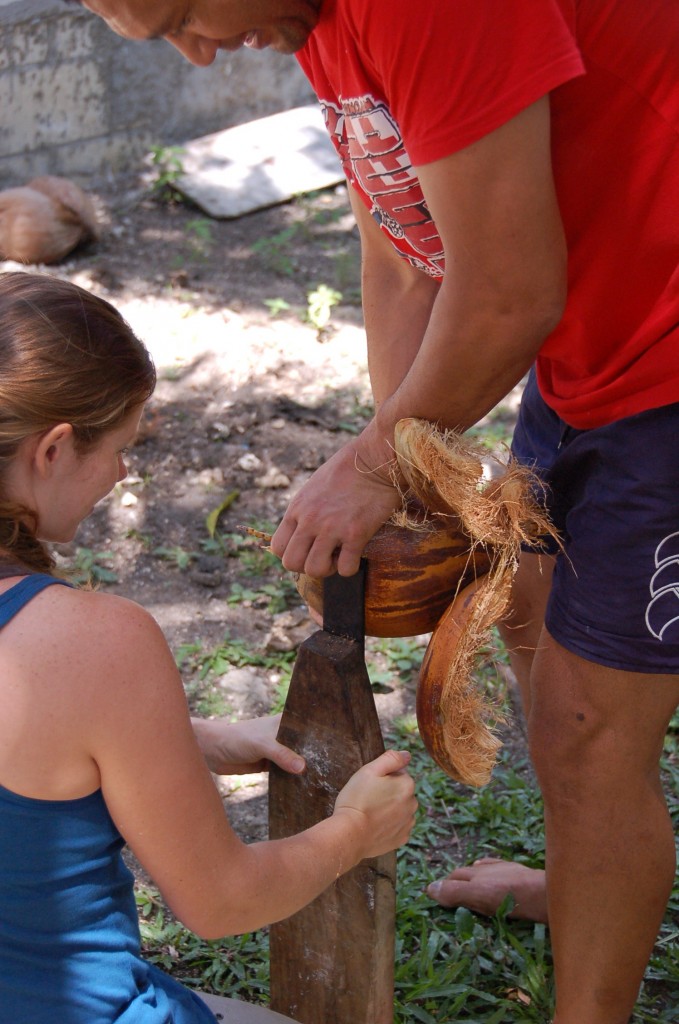 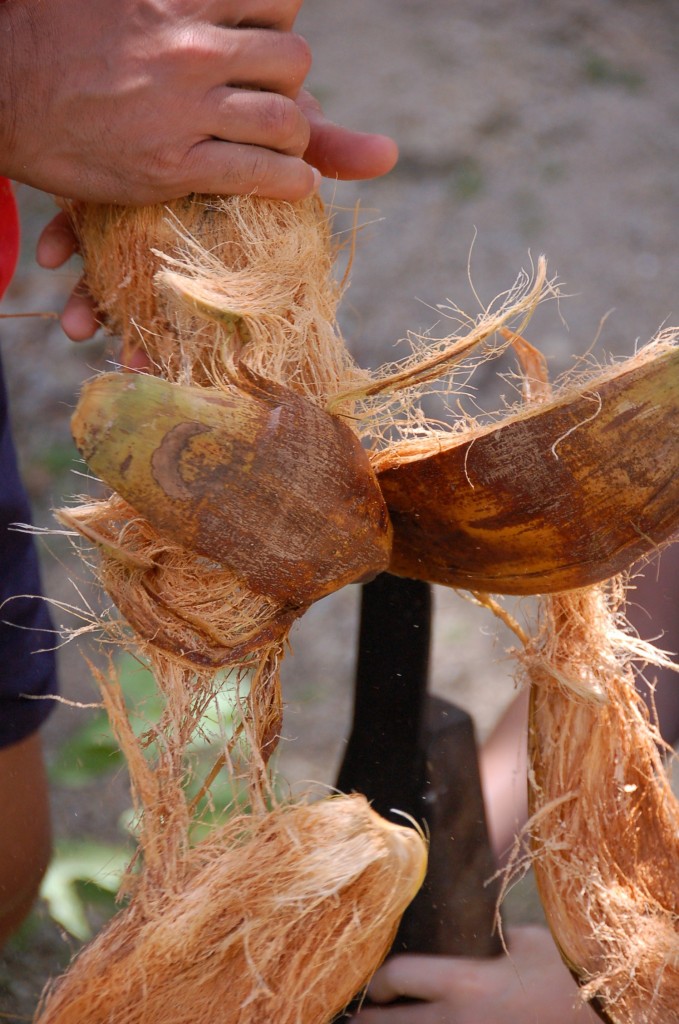 This technique is not recommended to novices, and come to think of it, to anyone who has an attachment to their various appendages. Toni knows what he’s doing, obviously; he split that coconut in half after about three whacks! 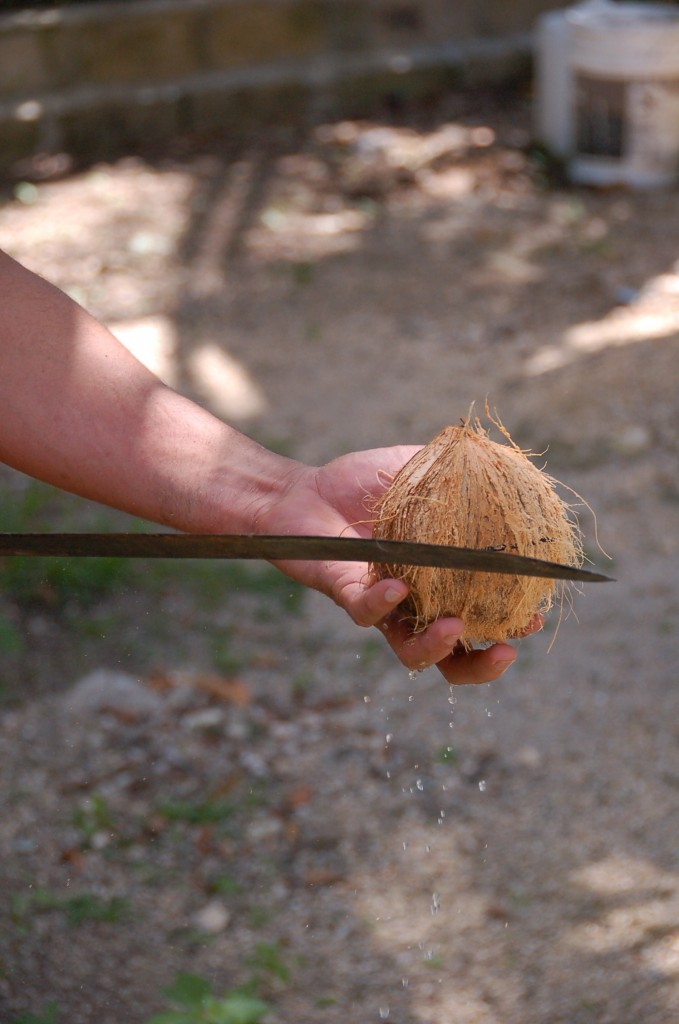 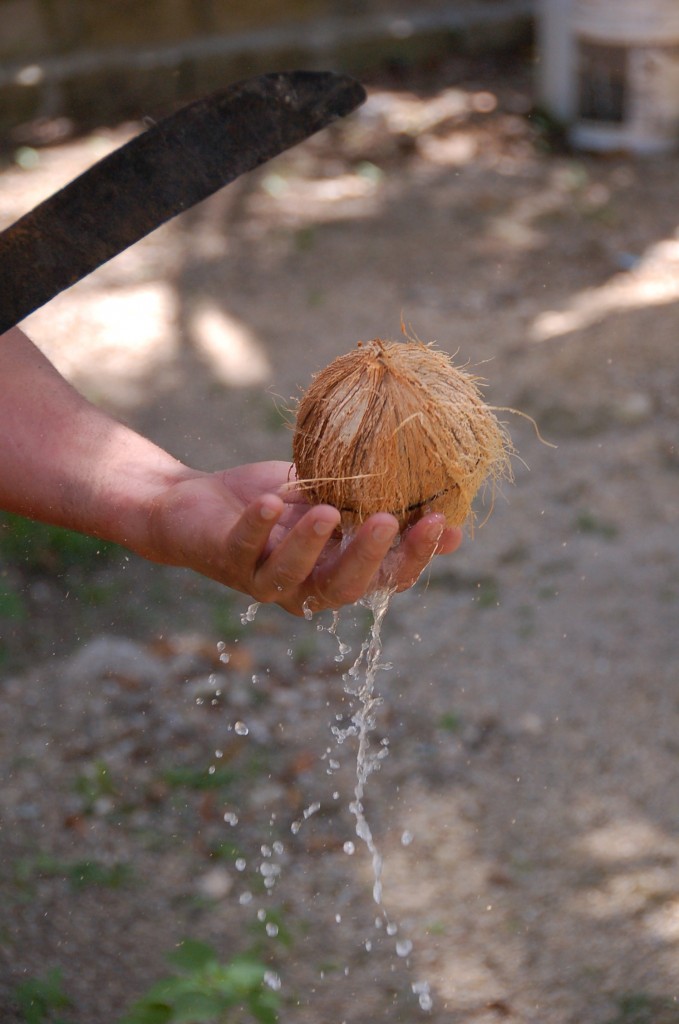 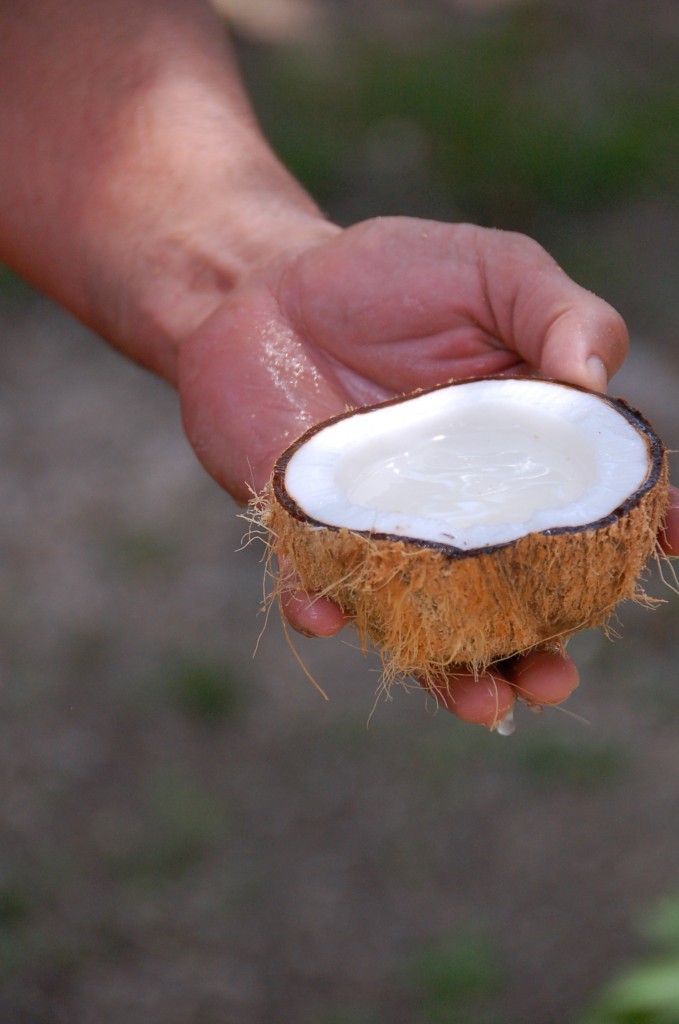 The meat inside of the shell is grated against the hakalo (the paddle portion of the tool is sat upon), using quick, curved motions. Toni was amazingly efficient;  he did half a shell in two or so minutes. It’s a  pretty tricky business, actually — when I tried the second half, I could barely scrape any at all because the angle is rather awkward, not to mention my pathetic hand-eye coordination. Sam and Amy, both of whom also gave it a go, were — as evidenced below — much more adept. 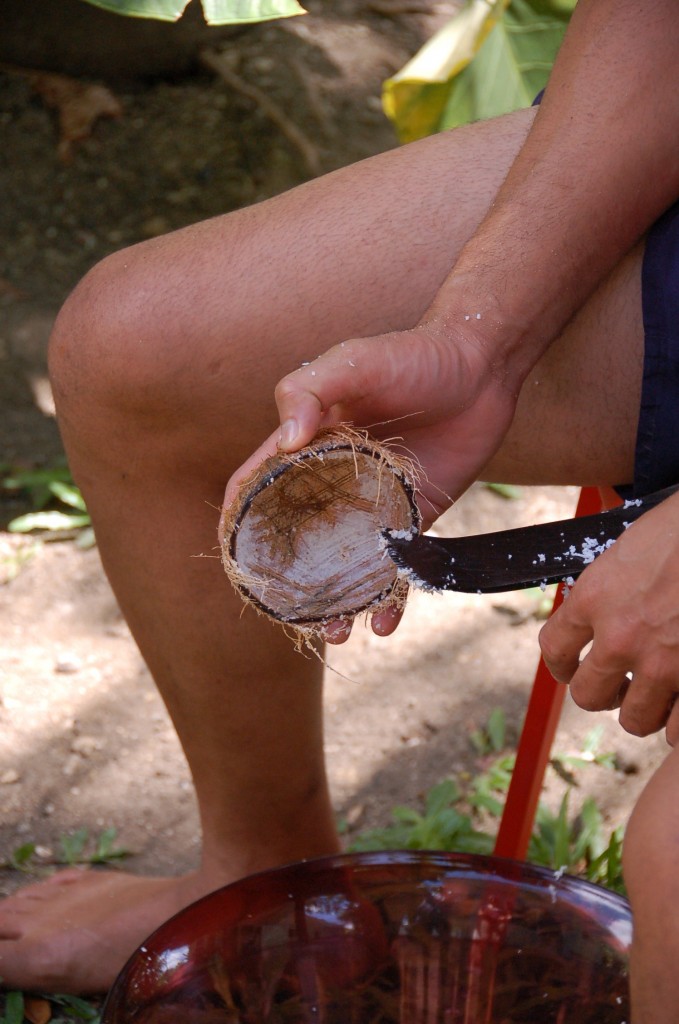 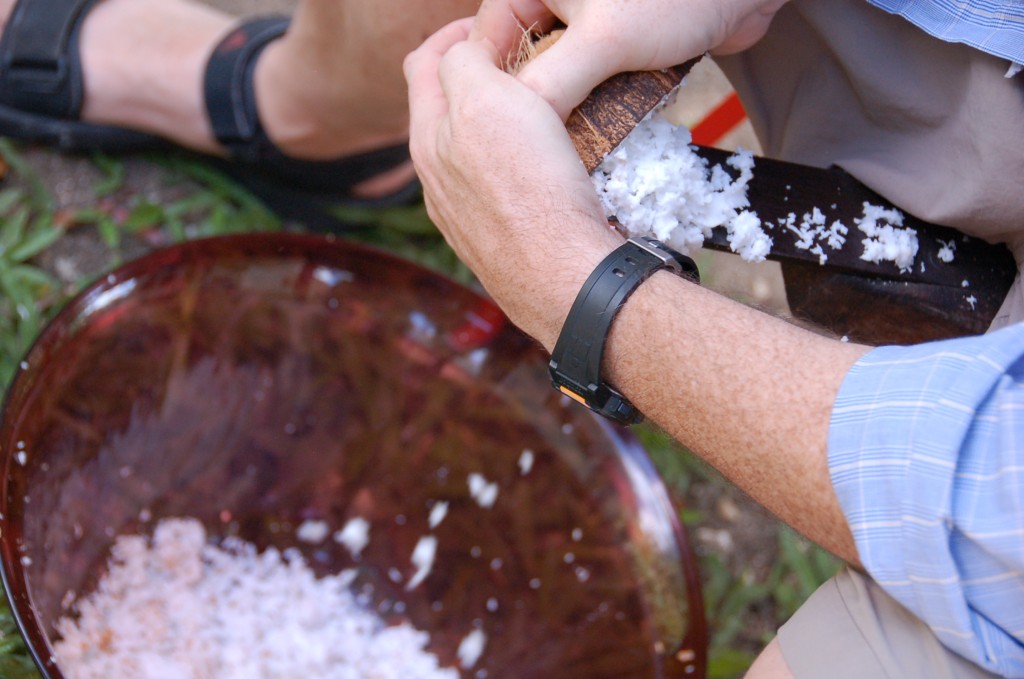 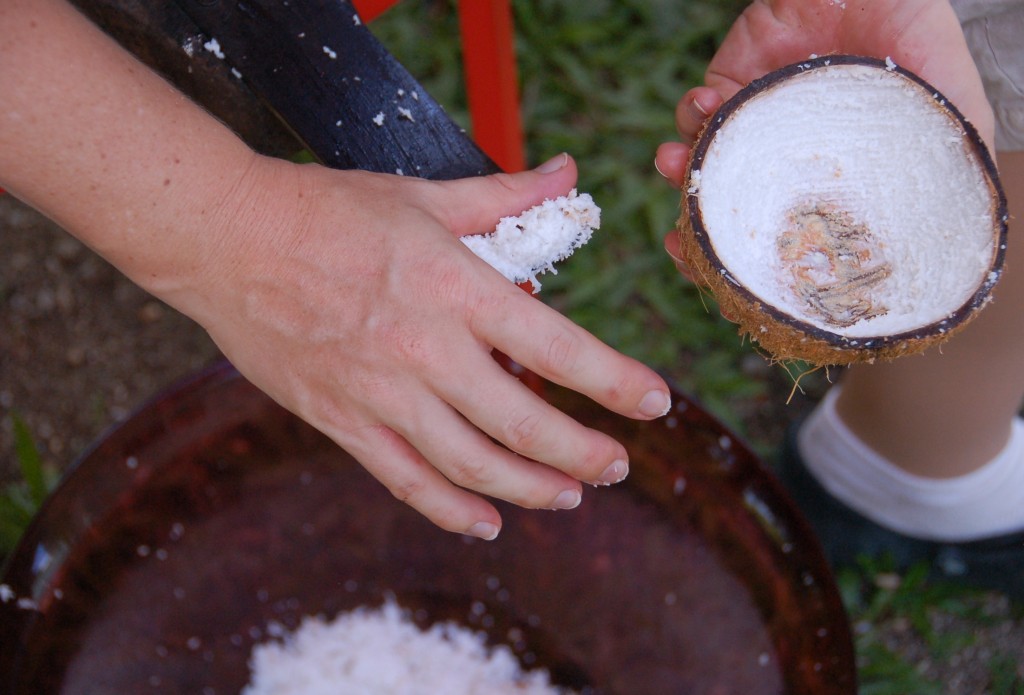 The husk is separated from the inner shell in sections, as shown in Step Five above, and then the fibers are agitated so that they separate and become a spongy mass, similar to steel wool. It is important to use the fresh husk, we were told, because the fibers absorb odors and any hints of mildew, etc., will otherwise taint the coconut cream. 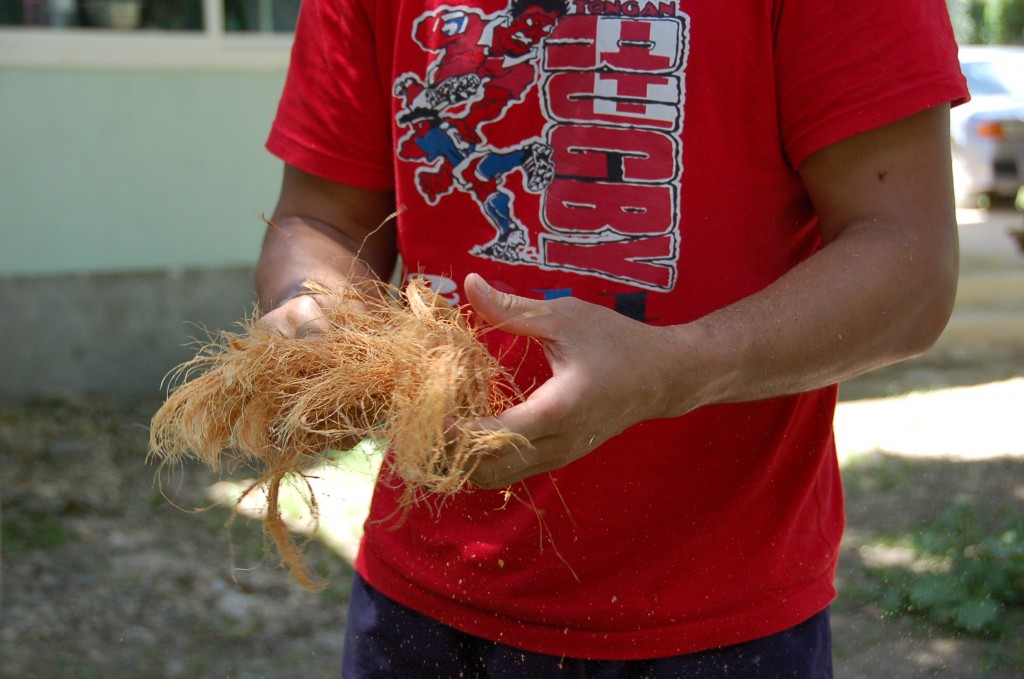 This part of the process is, honestly, a bit magical. I noted the modest pile of shredded coconut in the bowl and thought to myself, That won’t even make a tablespoon!
Well, I was wrong.
The process is rather tedious, even though Toni makes it look easy. The husk “sponge” is used to collect a portion of the shredded meat, worked into the fibers, and then the sponge is squeezed, pressing the liquid back into the bowl. 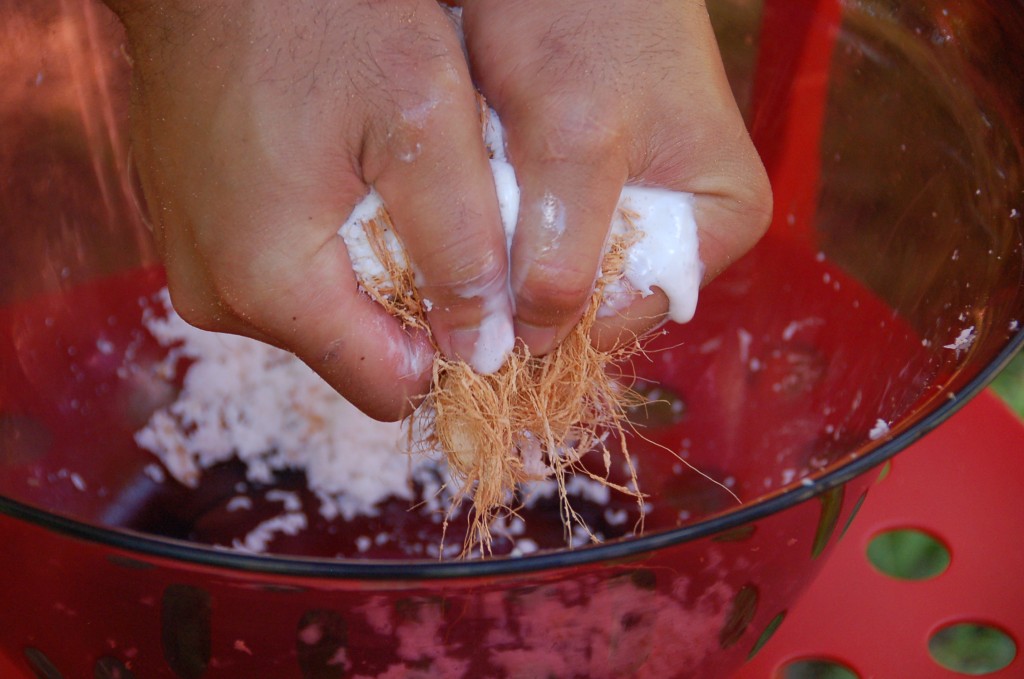 The expressed coconut shreds are then shaken from the sponge, leaving a tasty treat for chickens to snack on later.  Another portion of  coconut meat is gathered into the sponge, and the process is repeated until all the meat has been squeezed, producing a surprising amount of coconut cream.  Toni and Amy said that one coconut produces enough cream to bake one medium-sized fish.  Or, as we were about to discover, one coconut makes enough cream to make the amazingly delicious ‘Otai! 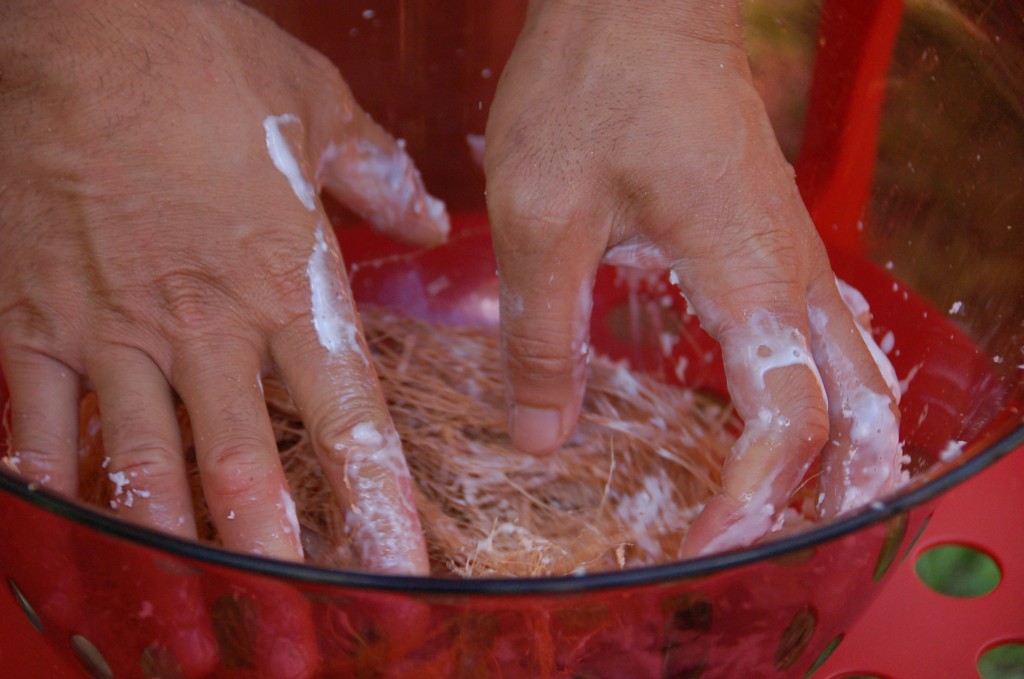 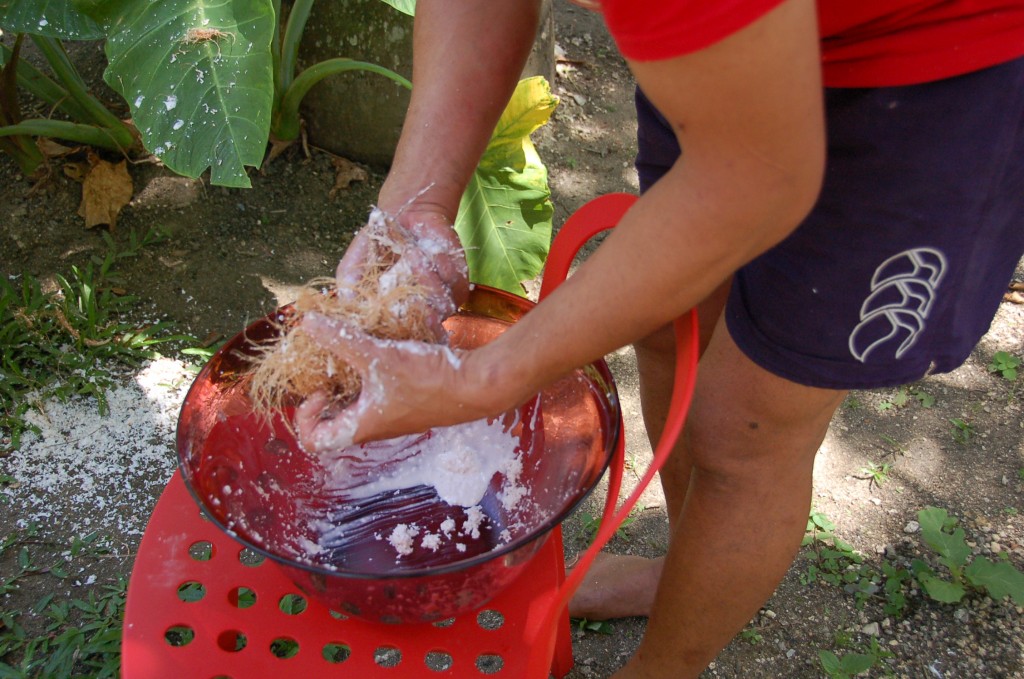 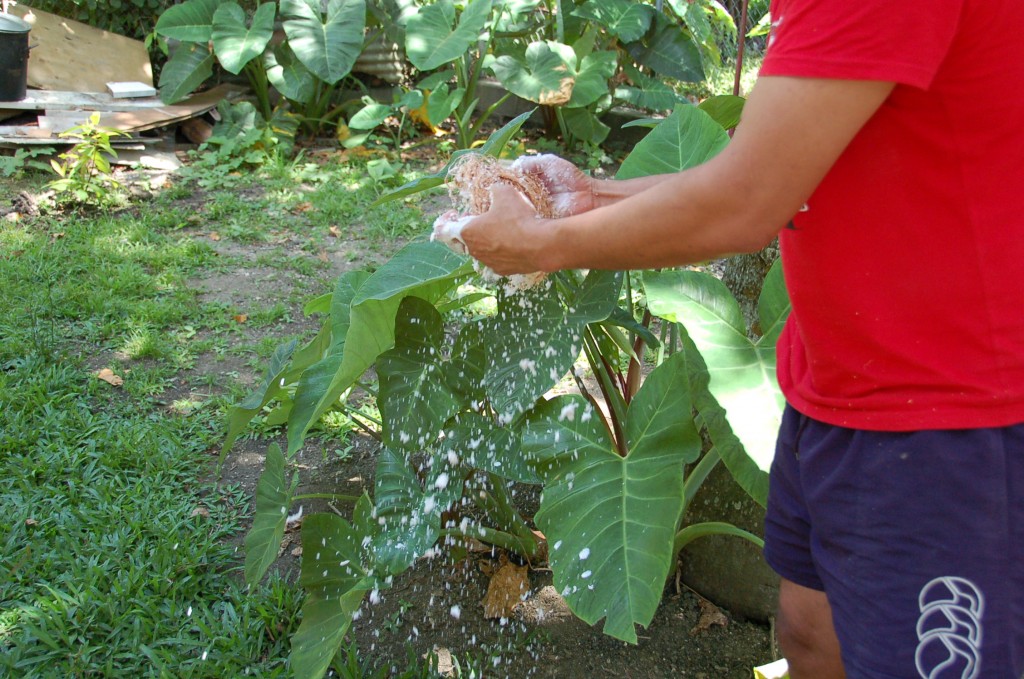 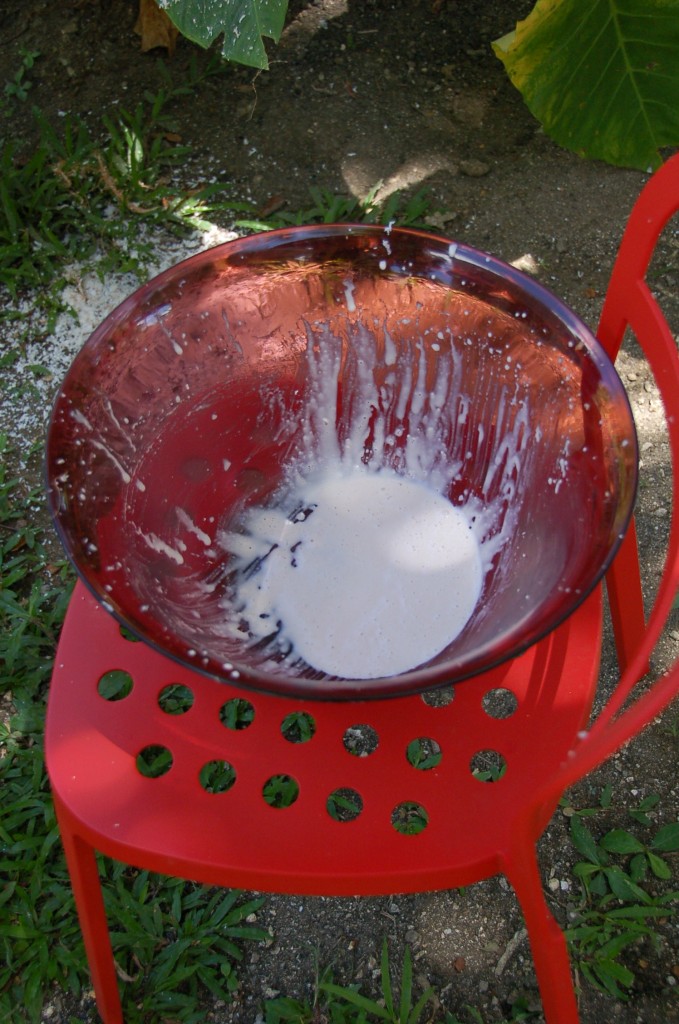 Now, Tongans are experts in the art of coconut cream cuisine.  I’ve never lived anywhere where this stuff is used so ubiquitously but today, Amy treated us to something Sam and I have never had before:  a fresh fruit smoothie, more or less, called ‘Otai. Amy made this ‘Otai by combining freshly grated pineapple (“Faina”), blended watermelon (“Meleni”), coconut cream (“Niu”), water, ice and freshly squeezed lime juice (“Kola”).  That’s it.  And it couldn’t get any better. 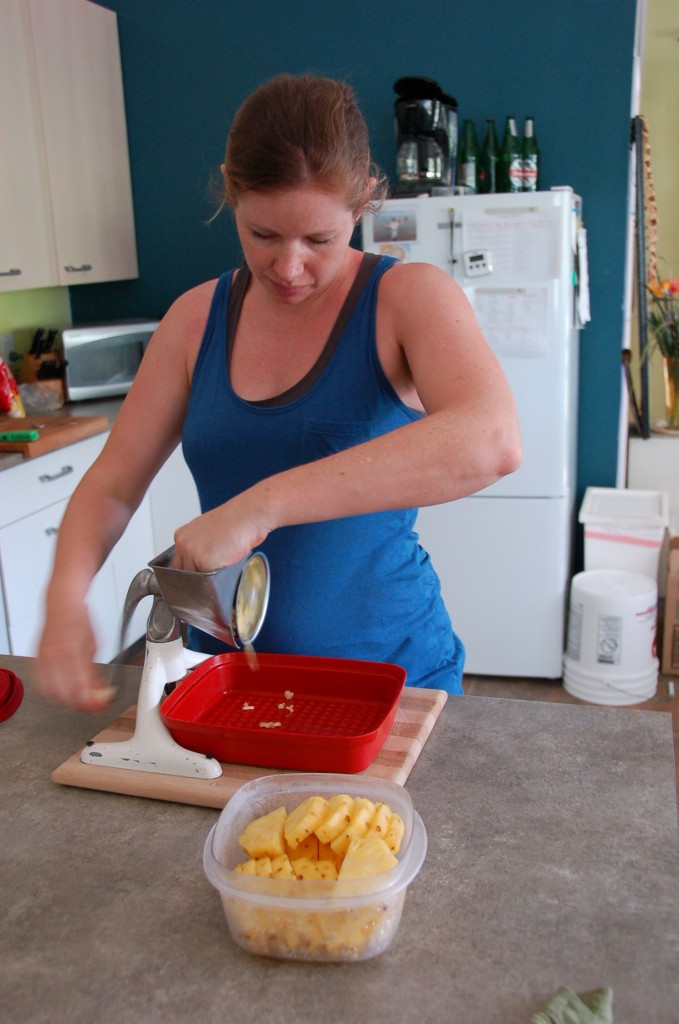 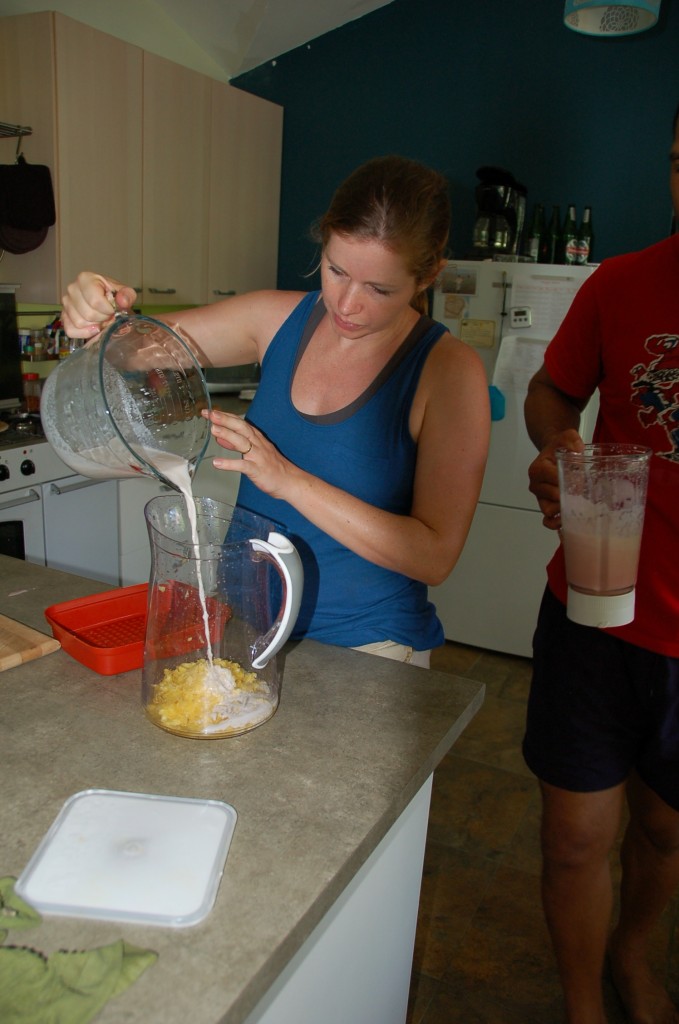 Except,  here comes the part where I’m extremely useful: 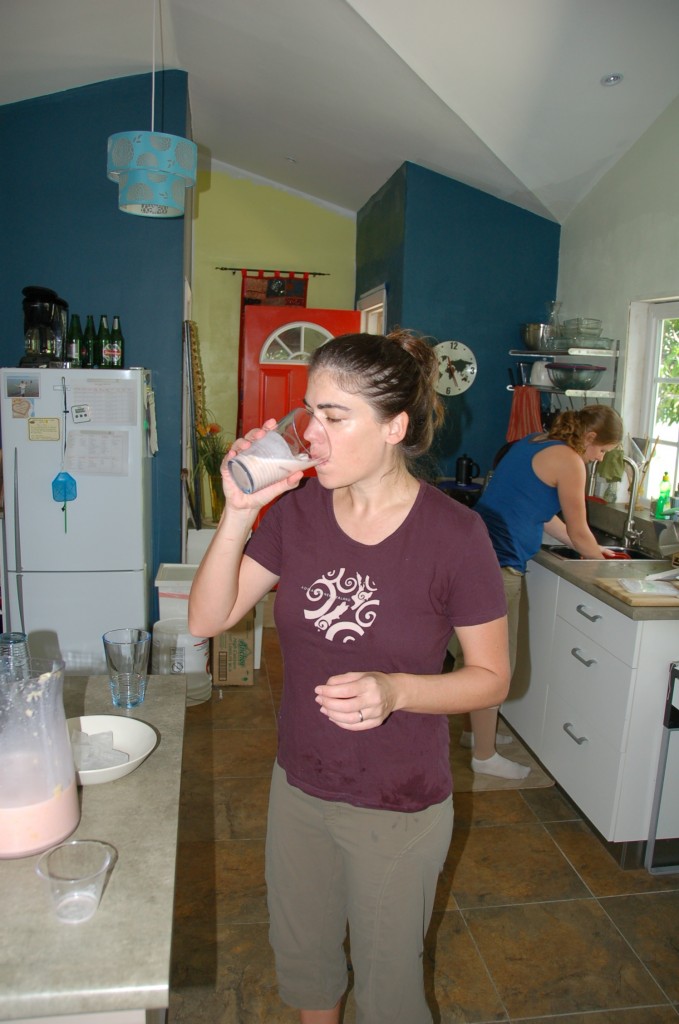