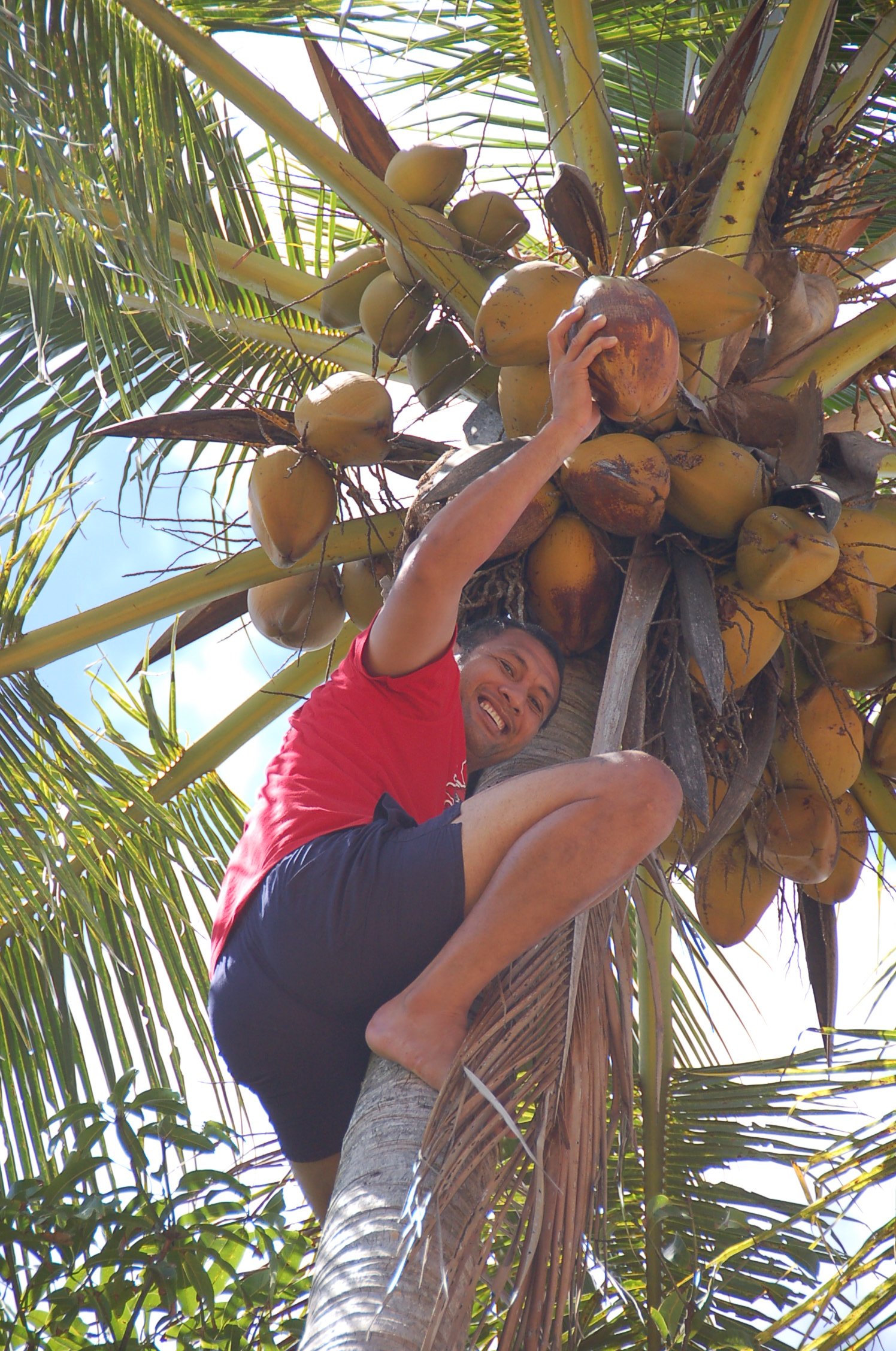 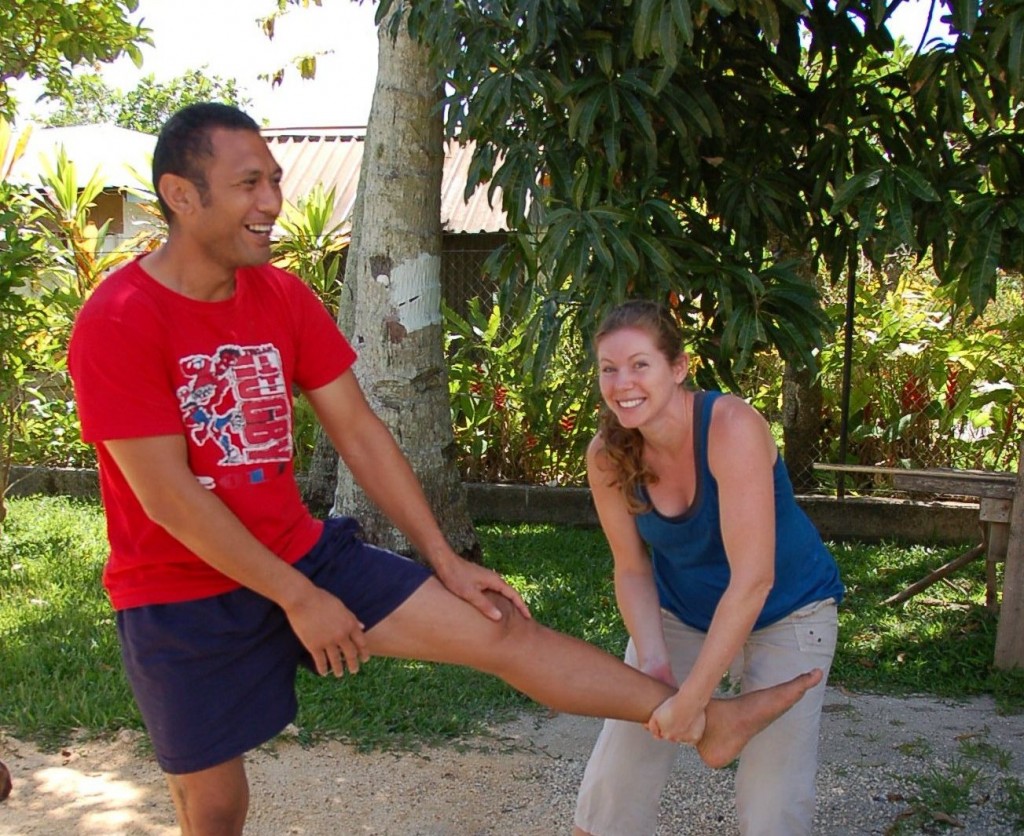 Today, Toni will show us Palangis how to make fresh coconut cream, an ingredient staple of the South Pacific diet, used in everything from Tonga’s famous Lu (dishes traditionally cooked in an underground oven (“Umu”)  and wrapped with taro leaves) to Ota Ika (raw fish marinated with onions and, often cilantro, then cured in lime juice and coconut cream — sooooo amazing!) to ‘Otai — more on that one later! 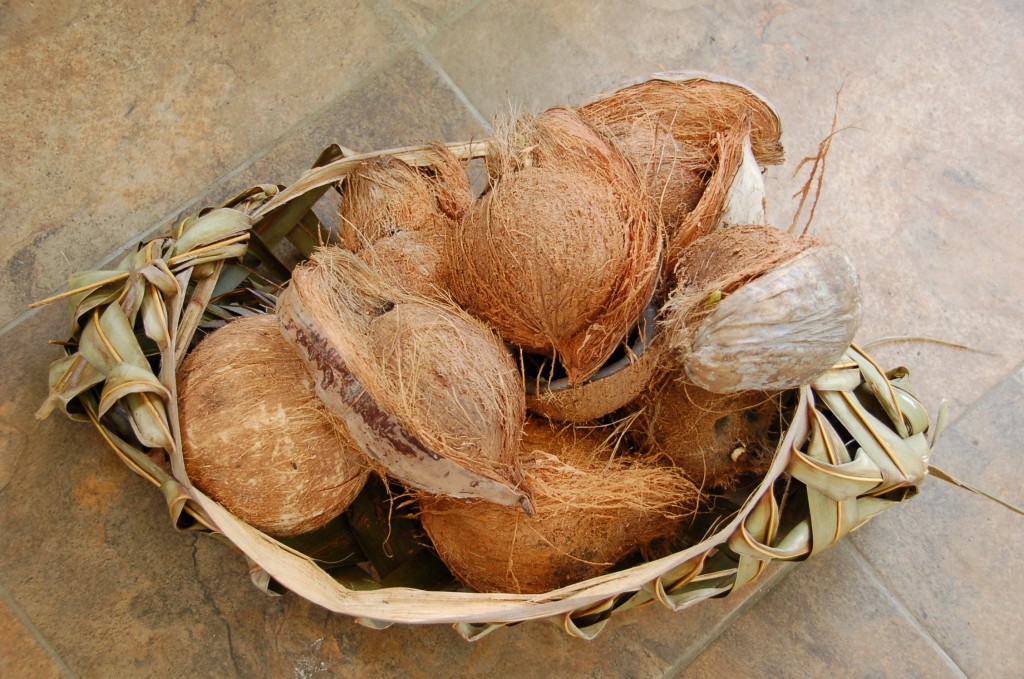 Coconuts (“Niu”) can be found everywhere here, and are usually sold at the market and along the roadsides in cute, coconut-frond-braided baskets like this.  The husk is partially left on, as pictured here, because the fibers are used in the process (see Step Nine below).  In the highly unlikely event you can’t find coconuts at the market, just hang outside for a while.  Tonga used to export copra, and as such, the island of Tongatapu is more or less a giant coconut plantation.  Sooner or later, you’ll hear a dull thud, announcing the arrival of one recently felled coconut.

But Toni isn’t just going to show us how to make coconut cream out of a conveniently acquired niu.  No, in true Tongan fashion, he’s taking hospitality to new heights, and I mean that literally.  Because today, Toni starts his presentation with step one in the process:  climbing the world’s* tallest coconut tree.

(*Disclaimer: Okay, that last statement isn’t entirely fact-checked, but here are the pictures of Toni’s death-defying acrobatics; you be the judge!  No humans or animals were injured in this recording.)

(Or, in English parlance, Climb that Tree!)  And it should be noted that, other than a notch at the base of the tree to place one’s foot in, as Toni is doing in this first picture, the tree is otherwise entirely un-notched, un-prepped and altogether un-formatted for human climbing.  Also?  That tree is steep.  I had to tilt my lens in order to capture the height of the tree, but its true angle is closer to ninety degrees than what appears below. 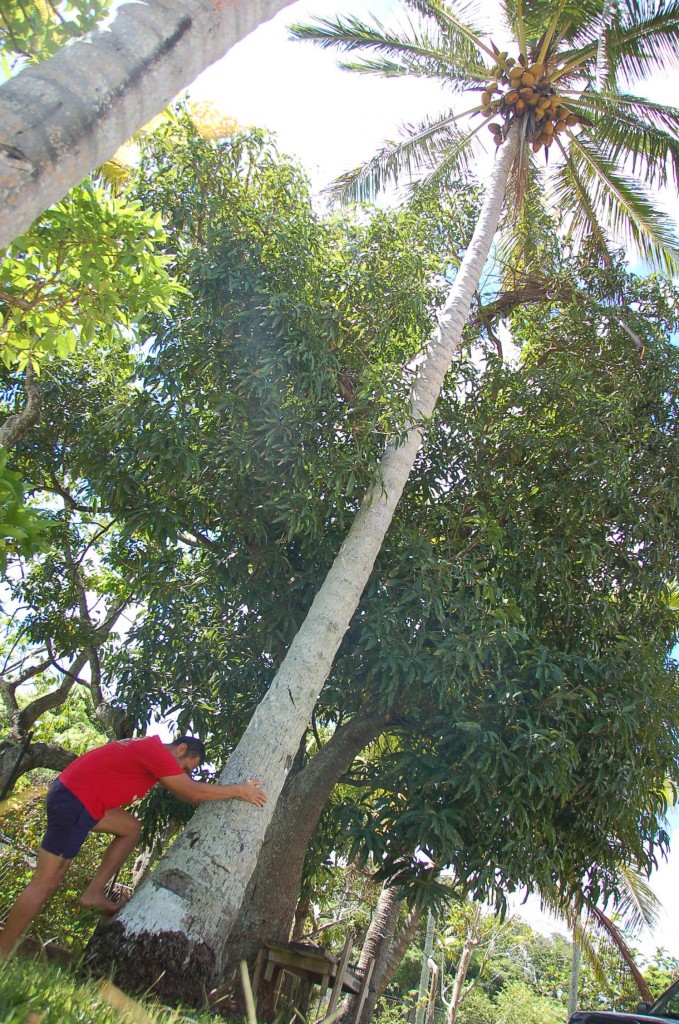 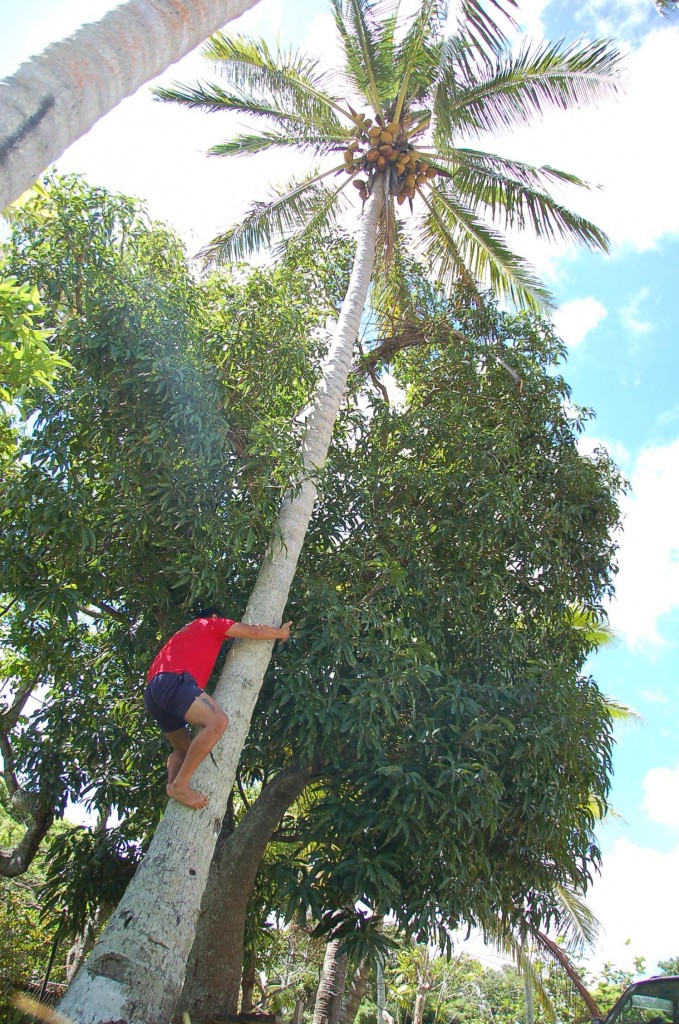 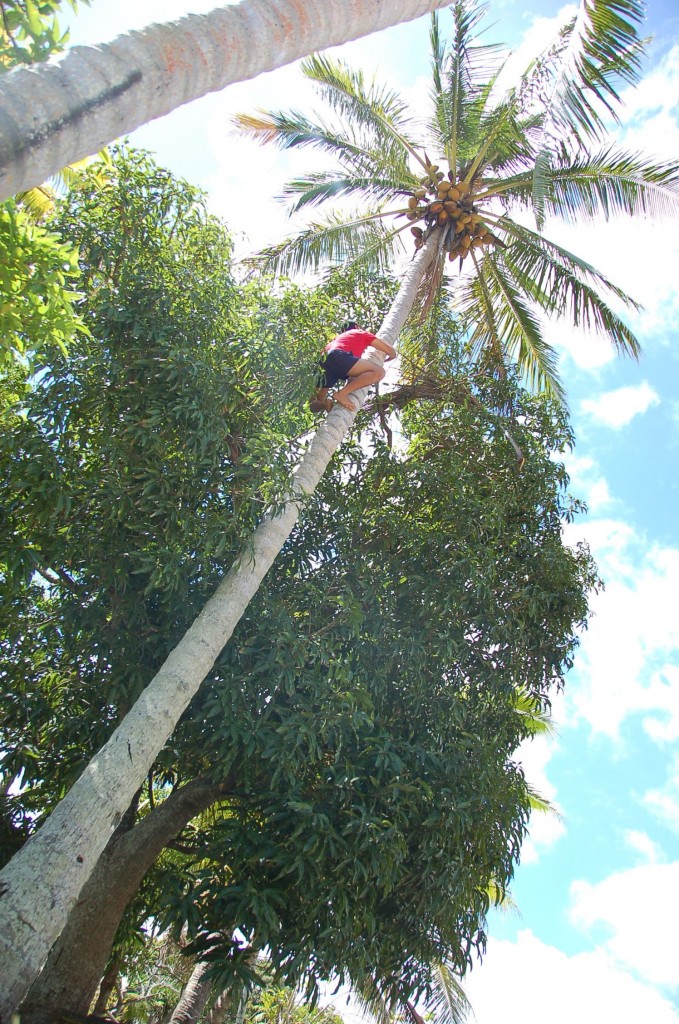 And it should be matured, so that the skin has changed from green to brown, like Toni’s choice here. 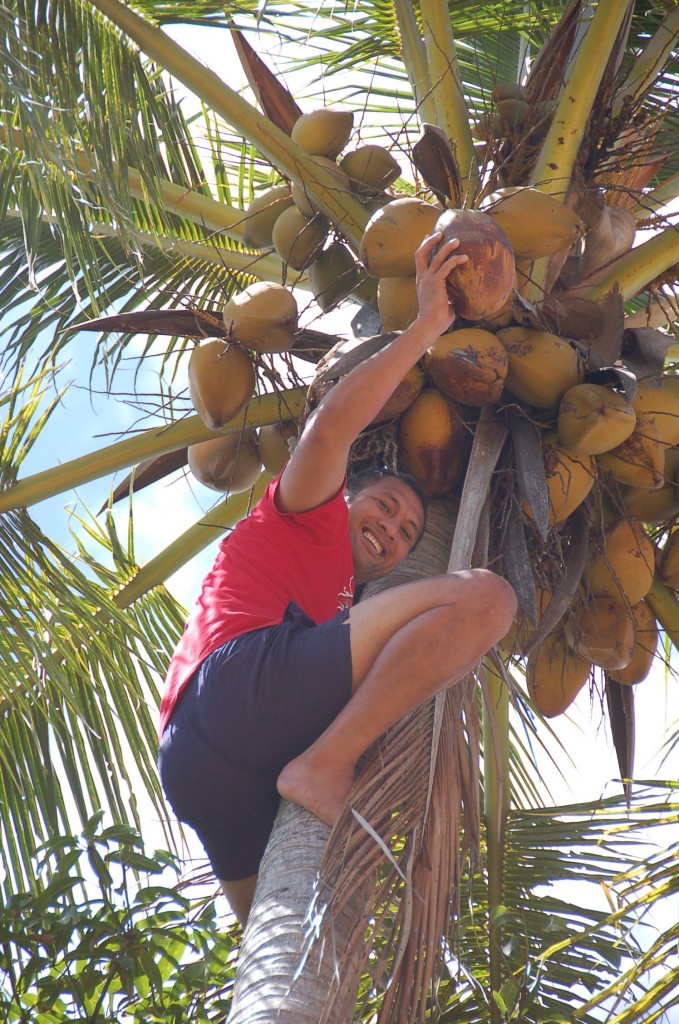 STEP THREE:  Get Back Down … Alive!

I don’t understand how he did this without ripping his skin off, but Toni slid back down the tree like this, the whole way. 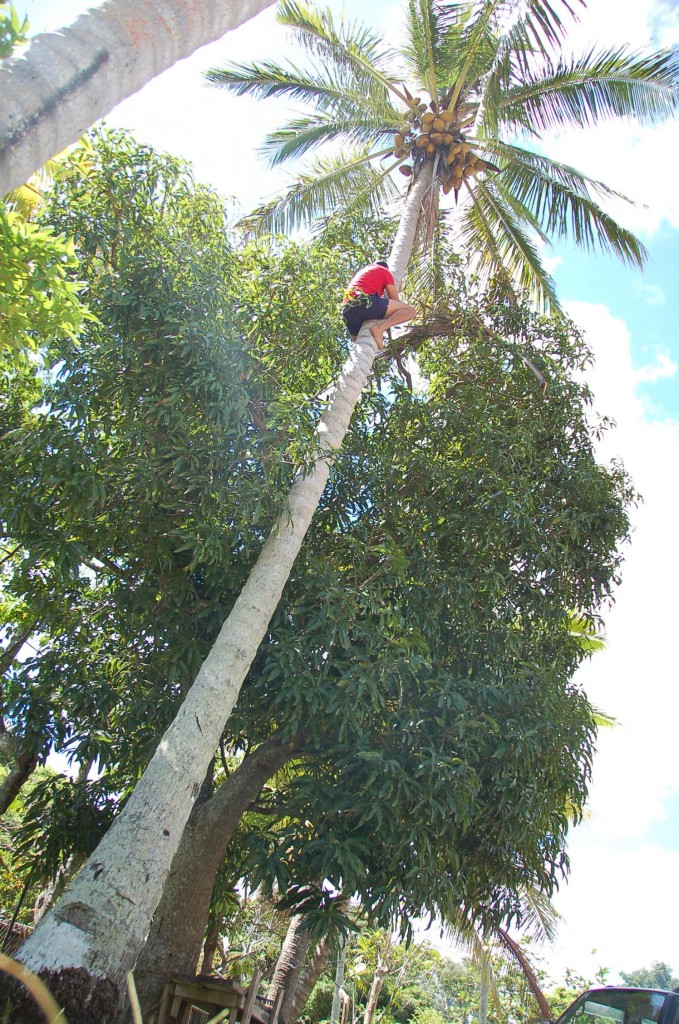 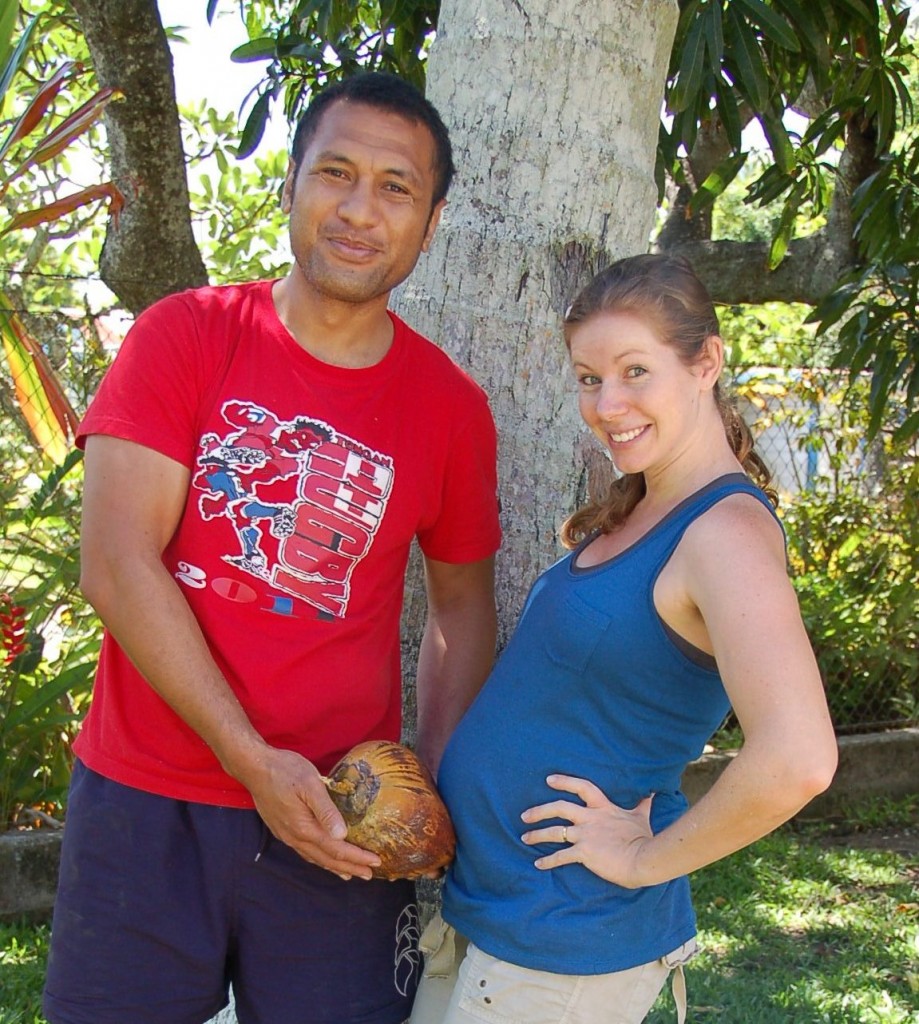 Next up: How to make fresh coconut cream!

2 thoughts on “How to Climb a Coconut Tree”