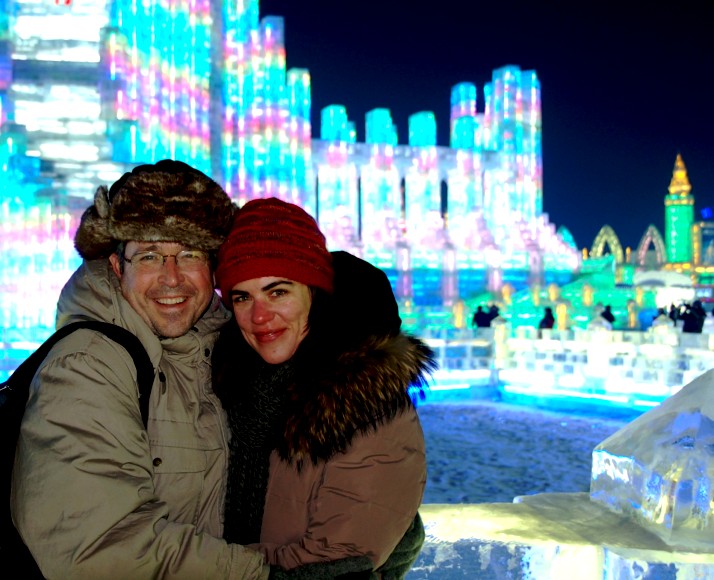 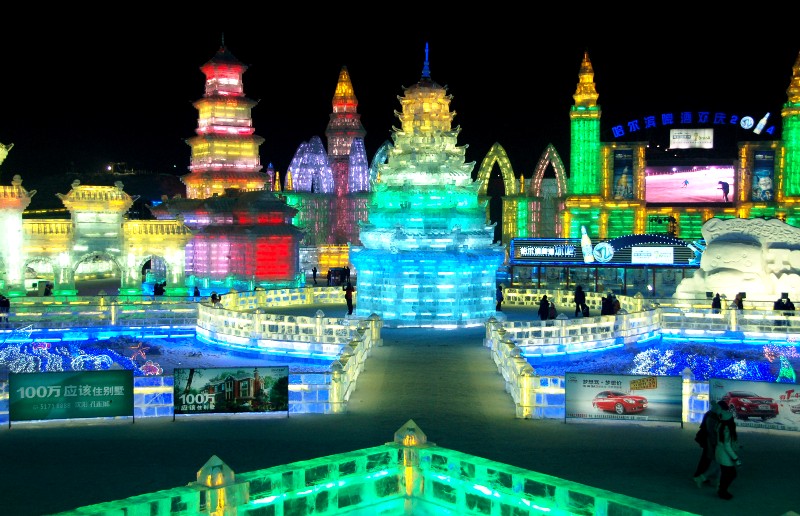 The Harbin Ice Festival is currently the largest ice festival in the world. Located in northern China in a city that blends an eclectic mix of Russian, Jewish and Chinese heritage, Harbin is definitely a destination worth a visit — even when temperatures drop as low as negative 40 degrees, which is, interestingly, the one temperature where Fahrenheit and Celsius are identical!

There are several things to do and see around Harbin, but of course, the main draw is the famous ice festival that runs from early January to late February each year. 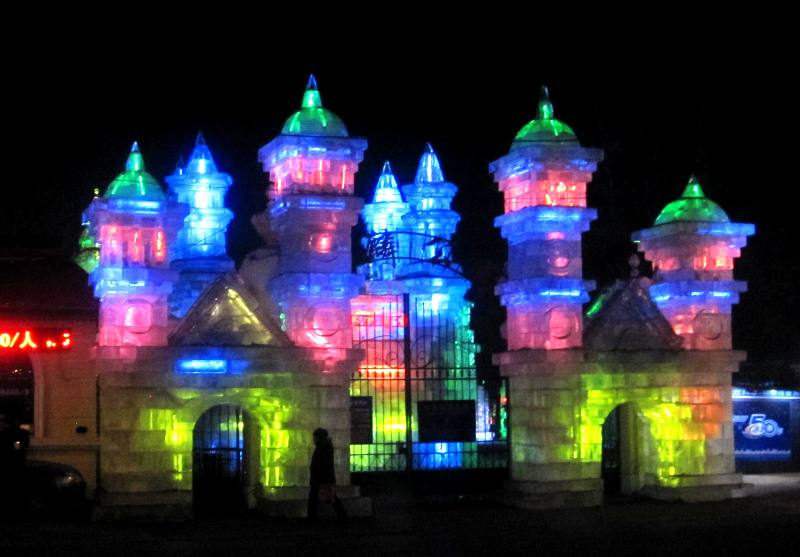 Originally begun in the 1960’s in Harbin’s downtown Zhaolin Park, the festival has since morphed into three venues, the largest being the combined Ice and Snow Sculpture Festival on Sun Island (300 RMB admission for the main attraction: “Ice and Snow World Festival” and 250 RMB admission for the “Ice Sculpture Festival”), both sitting just across the Songhua River from downtown Harbin and both celebrating their 30th year anniversary in 2014.  The third (and original — it is celebrating its 50th anniversary this year) Zhaolin Park location is now much smaller than its Sun Island competitors and is known as the Ice Lantern Festival (200 RMB admission).  Confused yet?

Which Venue:  We chose to attend the big daddy — The Ice and Snow World Festival — on Sun Island earlier this month and I think Sam and I would both say it lived up to expectations. The Ice and Snow World Festival is more or less a wonderland of ice buildings and sculptures, elaborate ice slides catering to adults and children alike, ice cafes, ice concert stages, ice bridges, ice fountains, ice temples and mini-castles … you get the picture.  But the most fun? The surprisingly well developed toboggan and tube rides down ice hill tracks that are available to festival goers for FREE!  (Well, it’s included in your 300 RMB ticket price, but still!)

When to Go: Night is definitely the best time to go as all the ice blocks that make up the various ice structures are lit from the interior with colorful lights. I have yet to see a photograph that really captures how spectacular this appears in real life … and sadly, mine do no justice, either. So when you buy your ticket, make sure it is for the night venue. If you go during the day, you can not use the same ticket to attend at night. 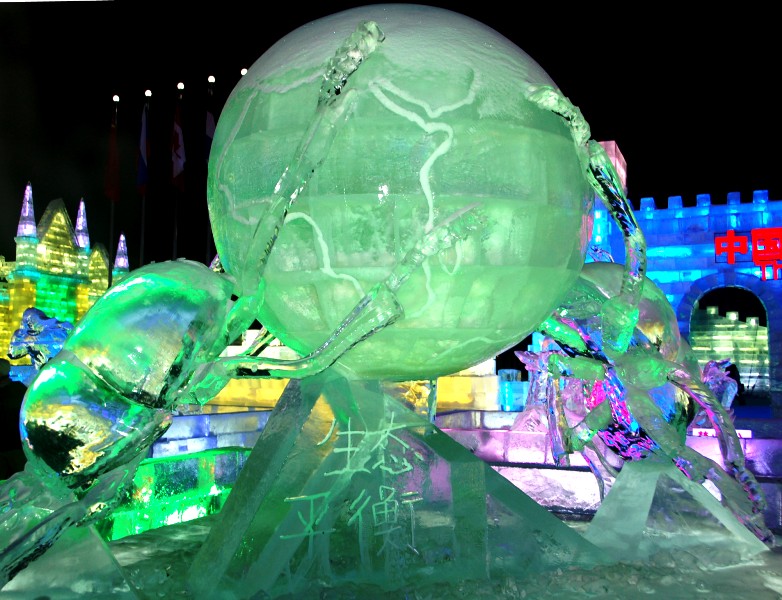 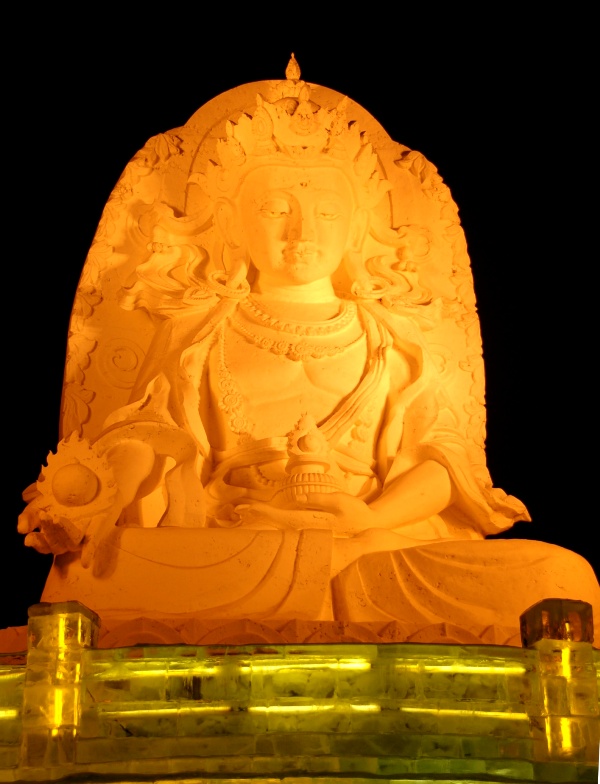 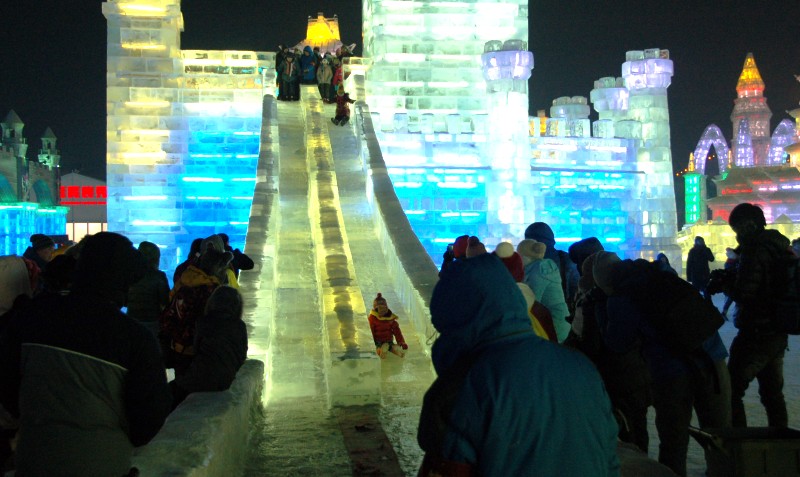 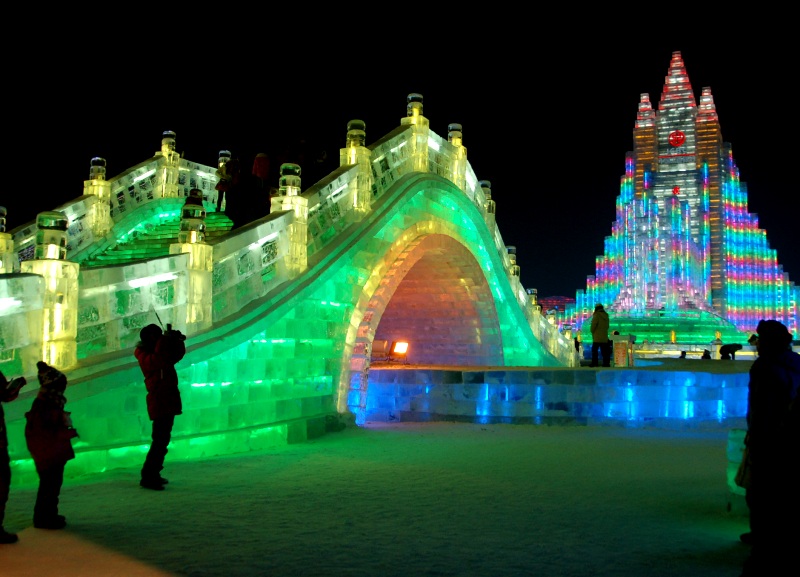 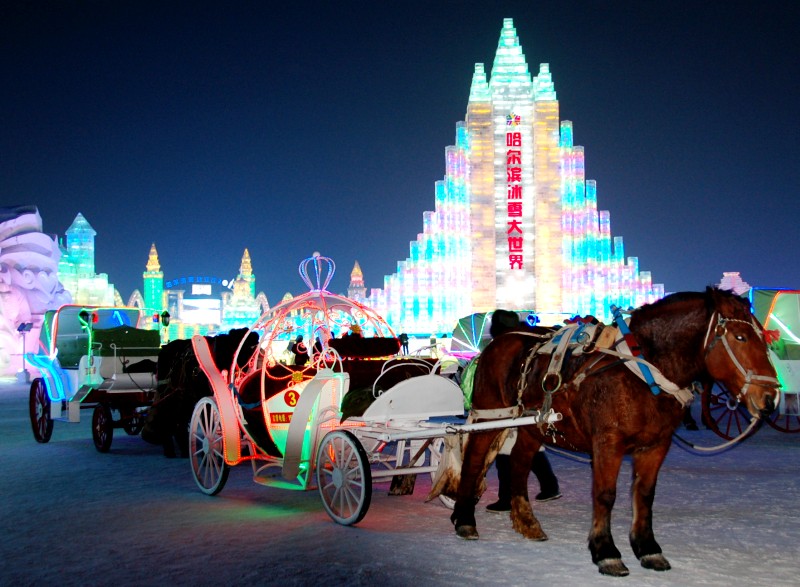 1.  If you go to the Ice and Snow World Festival, you can buy the entrance ticket on site, just beside the entrance area.  Also, make sure you agree on the taxi price before entering the taxi or agree that the meter will be used.  The ride by meter is less than 30 RMB from town, but most taxi’s will request 50 RMB or more.  Our hotel tried to charge us 100 RMB for a taxi one way!

2.  Once at the festival, there is a long queue of taxi’s waiting for a return ride that is managed by Harbin police officers, so don’t let people tell you there are no taxi’s for return trips (or get bamboozled into paying way too much to one of the taxi touts as soon as you exit the festival premises).  Our hotel tried to tell us the former and as for the latter scenario, here’s what happened:

When we exited the festival, I didn’t see the queue at first and, relying upon the hotel’s advice that return taxi’s were difficult to come by, bargained with a taxi driver (hustler) waiting at the exit gate to return us to town for 50RMB (she wanted over 100 at first!).  When we were led to the taxi, it was already filled with four other passengers!  Apparently, the driver was trying to stuff as many poor schlubs as possible into her cab before departing.  We turned around despite the calls of “Hey! You come here!” and found the queue, got in a proper cab, asked for the meter and ended up paying around 20 RMB for our return trip to the hotel.

3.  Also,hotels and taxi drivers may try to “help” you arrange tickets in advance.  From our experience, this involves arranging a “free” taxi drive purportedly to the festival that actually ends up being to a travel agency downtown.  Said agent will cheerily take your 300 RMB and then give you a ticket for a bus that will take you to the festival and procure your entrance ticket for you.   Only then will you realize that 1, your taxi driver does not intend to drive the few kilometers more to the actual venue; 2, that the agent does not intend to return your money once you’ve caught on to the scam and that 3, you are now committed to sitting on a bus until the agency fills it to its satisfaction … and that’s just the start of what you’ve just signed up for. Solution? Grab your 300 RMB back before they can stop you, return the flimsy “bus pass” to the agent and … RUN!  Or something equally dignified.  Hey, it worked for us. 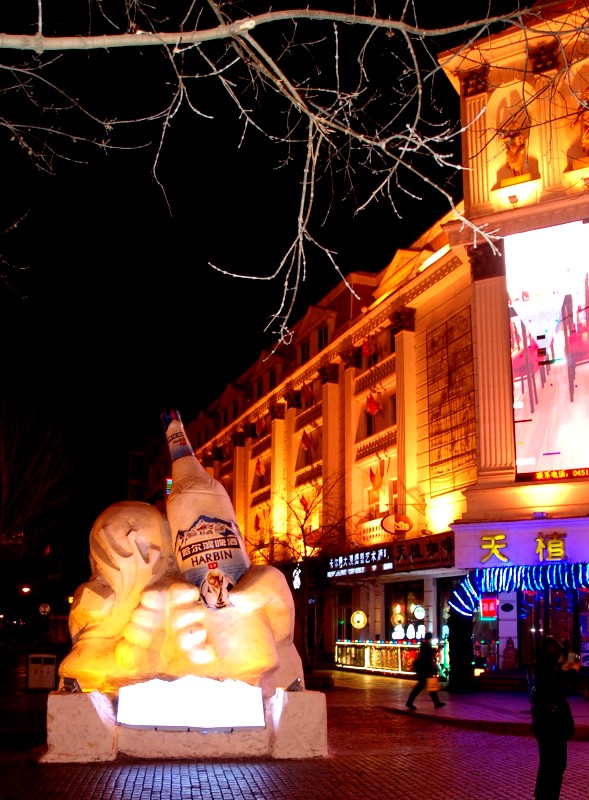 Where to Stay:  Probably the two most popular hotels during the Harbin Ice Festival are the Holiday Inn off Zhongshang Dajie (the pedestrian street in Old Town) and the Shangri-La overlooking the Songhua River.  Regardless of choice, all hotels escalate prices during the ice festival.

We stayed at the Jingu Hotel, right in the heart of Zhongshang Dajie, just by the Russia Cafe.  Great location, big, clean (and warm) rooms and a better price than competitors such as the Holiday Inn or Shangri-La … but not exactly cheap, either. The customer service was quite good and a few of the staff members spoke enough English to at least communicate the necessities. But I will say that the front desk soured us a bit when they tried to stick us with the Harbin Ice Festival taxi scam!

Other things to do in Harbin: see the next post!