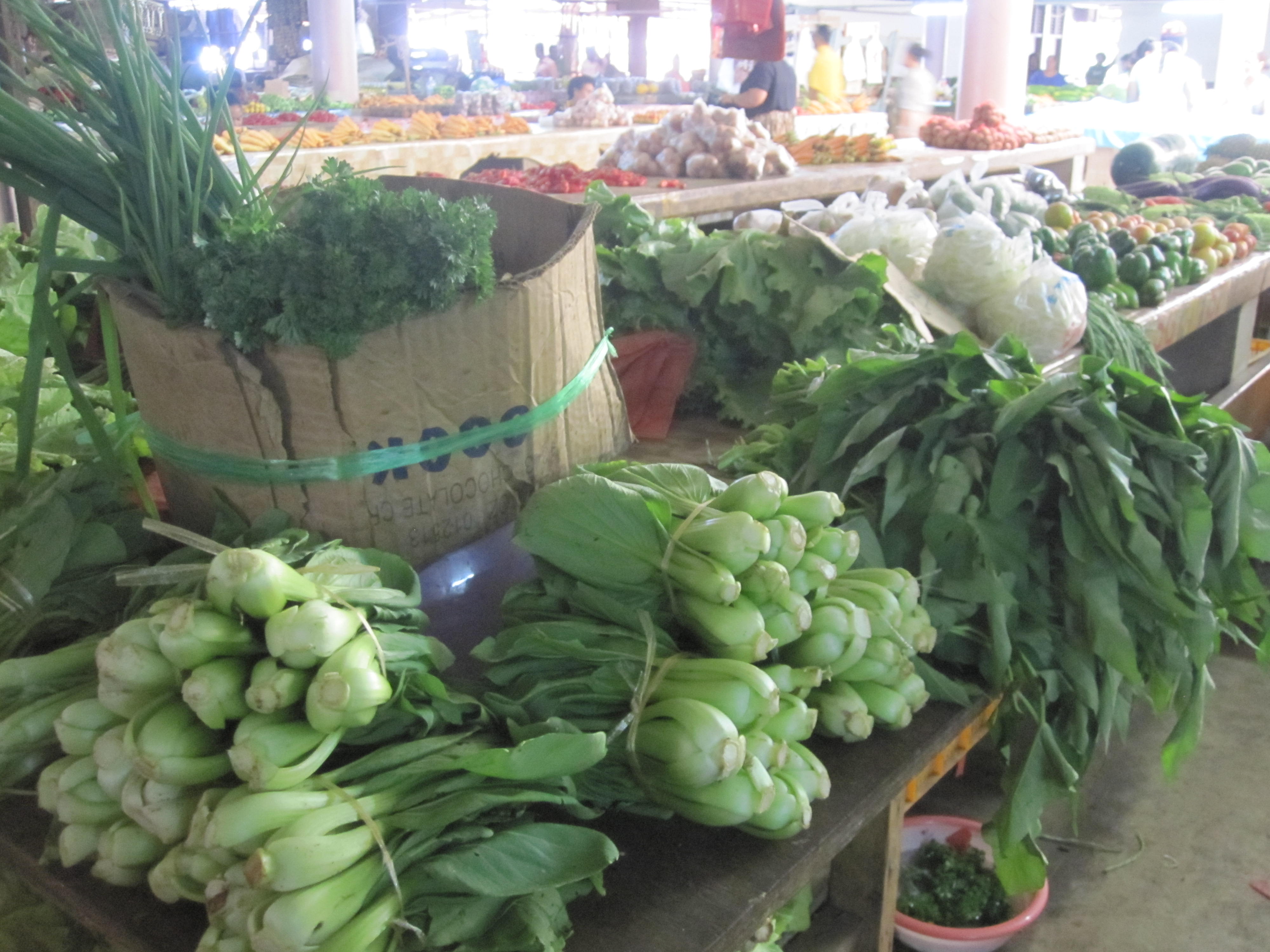 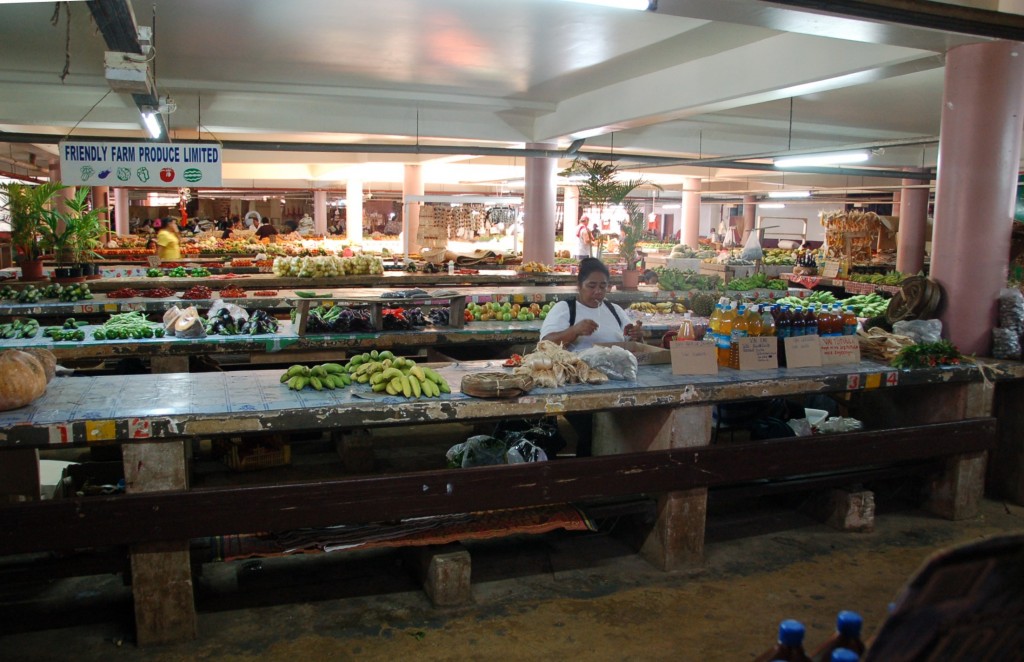 Back in the days of William Mariner, the island of Tongatapu was the dwelling place of royals, a land where, just living there, produced some level of envy to neighboring islanders.  Indeed, the word “Tongatapu” means “Sacred (tapu) South (tonga).”   And while the royal family still maintain principal dwellings here, for most visitors to the Kingdom, the beauty of Vava’u, the ancient cliffs of Eua or the pristine, sandy shores of Ha’apai are the locations that entice. 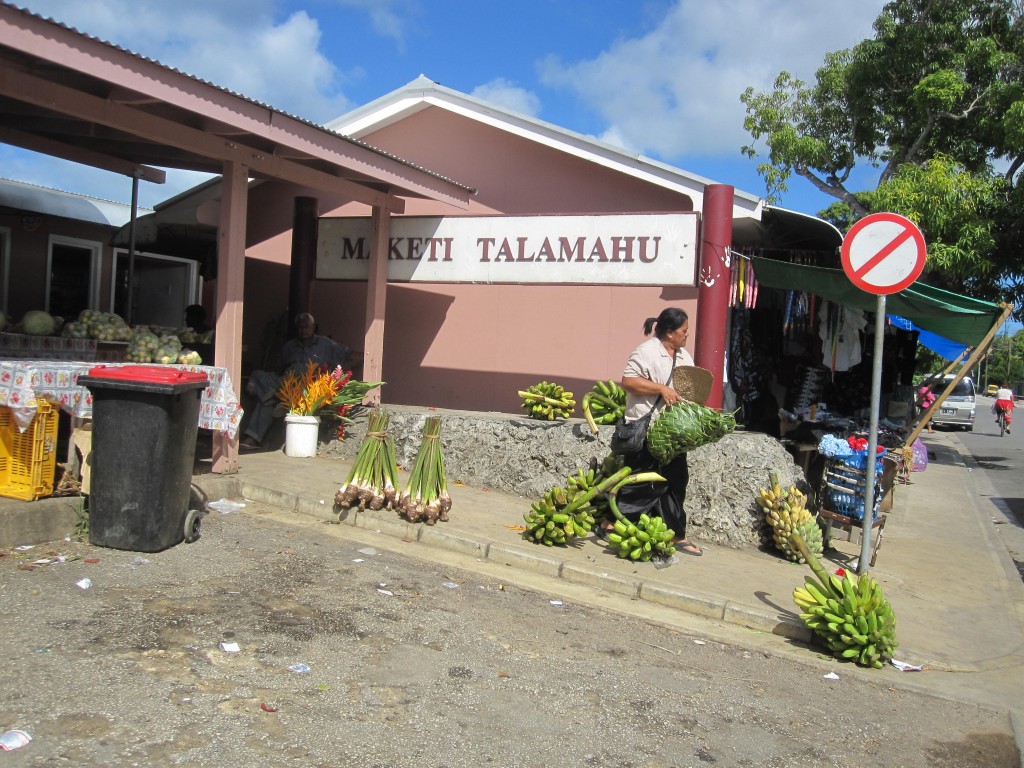 One thing Tongatapu definitely has in its favor, however, are the wonderful markets throughout the capital of Nuku’alofa.
MEKETI TALAMAHU

Even Vava’u’s (albeit more picturesque) downtown market can not hold a hold a candle to the variety offered at Nuku’alofa’s Meketi Talamahu, where everything from tui tui oil to woven kia-kia’s to the freshest fruit on earth is sold, all locally grown and made. 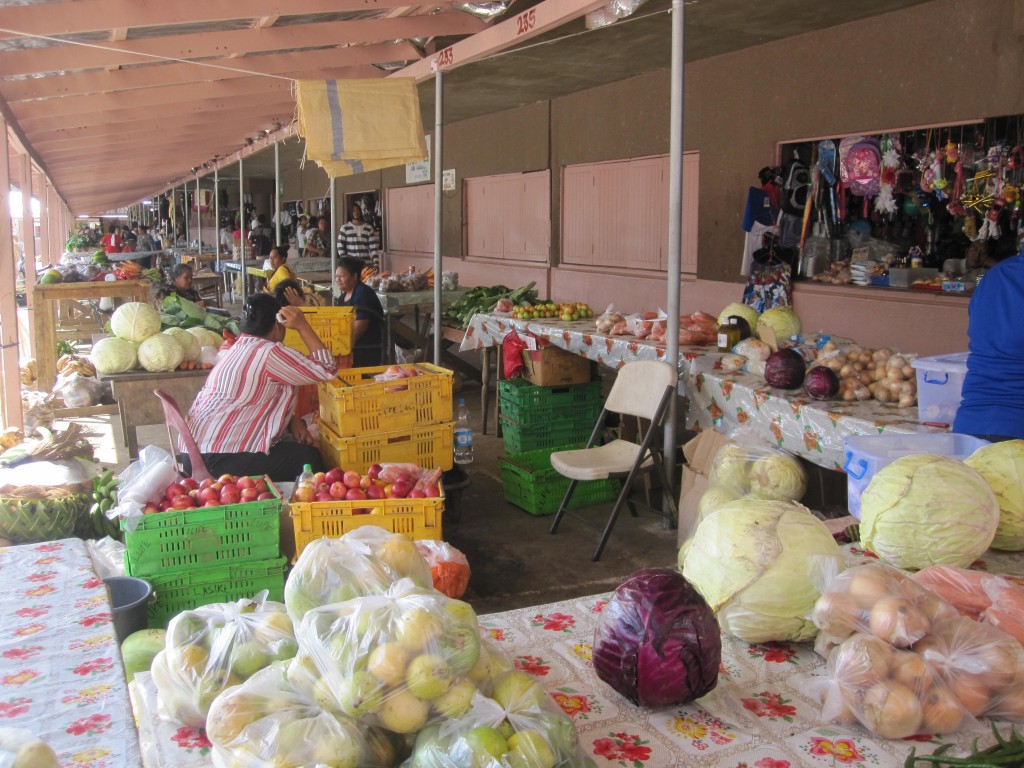 The market is open early every day except Sunday, runs full-bore to about 3 or 4 in the afternoon when various vendors slowly pack up and leave.

A few resolutes stay put  until as late as 6 or 7 in the evening for last minute buyers, but by this time, the picken’s are whatever happen to be there. 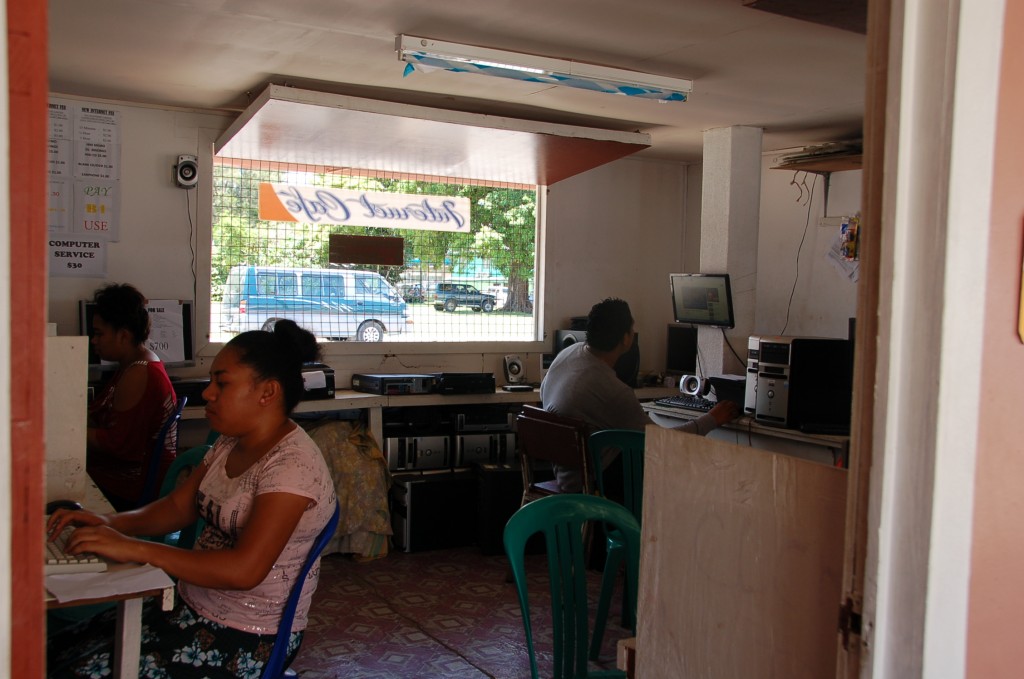 Without a doubt, this market is the place to go in Tonga for the widest variety of produce found in one place, in addition to other sundries found in the kiosks lining along the outside, where shoes, clothes, wood carvings, computer kiosks,DVD rentals and a few food stalls await. 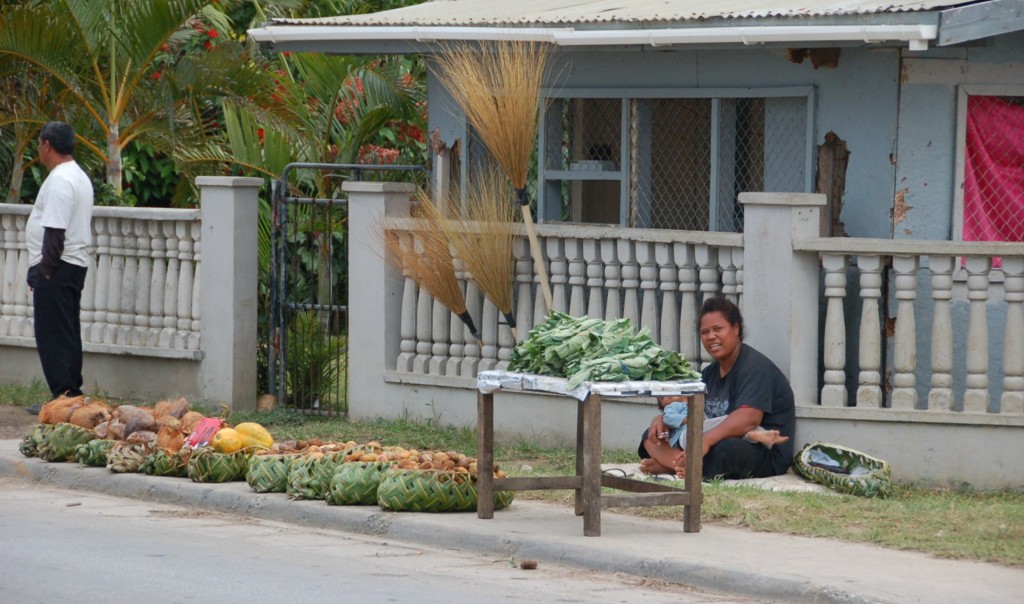 If you can’t make it to Meketi Talamahu for whatever reason during the day, you’ll still get a chance to grab Nuku’alofa’s amazing produce by ambling down Vuna Road, toward the fish market.  All along the way, you’ll find vendors selling coconuts, peanuts and a variety of fruits and vegetables.

I’ll list below the fruits, vegetables and root crops typically found on a daily basis, along with their Tongan names if I know them (if anyone reading this can help with the names/list, I’d welcome the help!).  And keep in mind, other than a few imports as noted below, this stuff is all fresh. 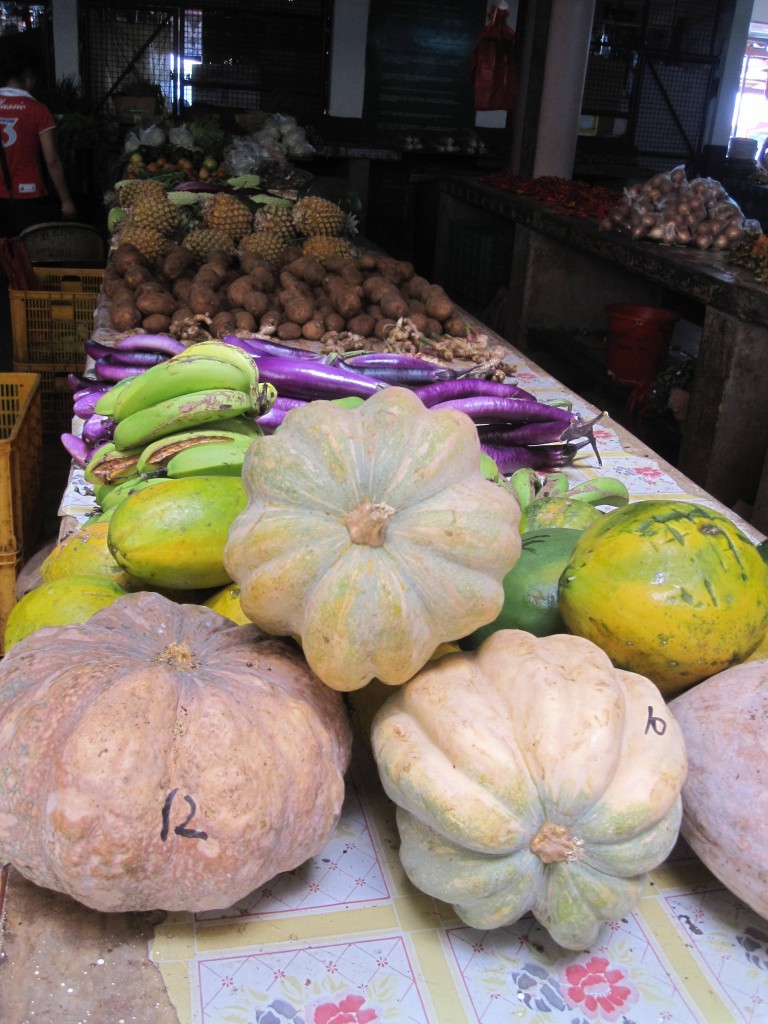 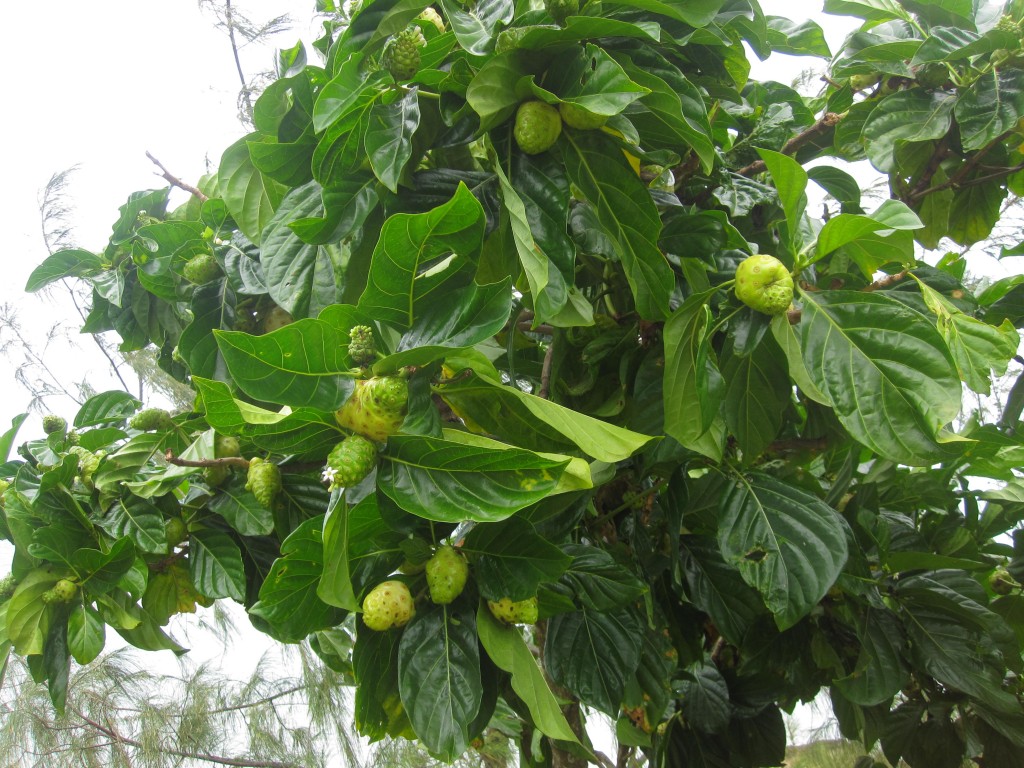 Seasonal Fruits: Mango (Mango — ha!), Pineapple (Faina), Guava (Kuava), Passion Fruit (Pasione), Tangerines (from Eua — Moli Vaikeli, I think), Sour-sop (‘Apele ‘initia, also known as Custard Apple, I believe, and then there is another type I’ve never tried called ‘Apele Tonga which is smaller, yellow-green in color and, accordingly to Jacinta’s fabulous cookbook, about the size of an apple), Tropical Lychee  (I think this is what is called Tava), Noni (if you can stomach this one.  Noni is probably the only fruit I’ve ever had that disgusts me, but hey, it’s supposed to make you live until you’re 200 or something.  But back to the fruit:) Avocado (‘Avoka), Grapefruit (Moli Tonga), and Vi, which I do not know the English name for.  Vi is a tree fruit — hard and green with pale flesh — and eaten similar to an apple. 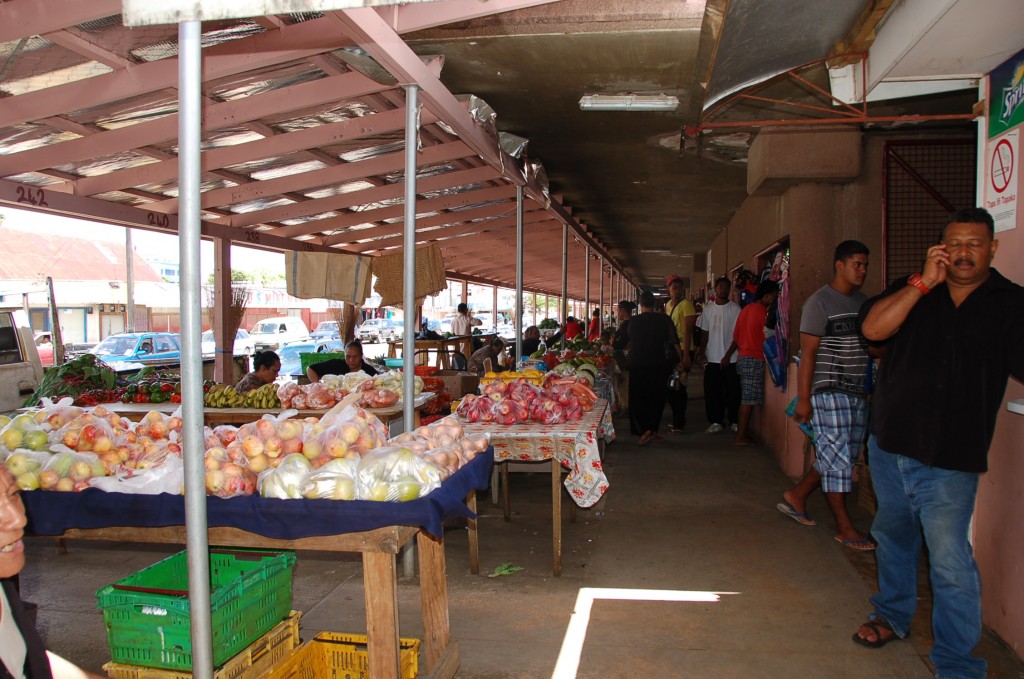 All Locally Grown Nuts: Peanuts (Peanuti — I think I have that spelled right?) and Tropical Chestnut (Ifi — seasonal).  These chestnuts are huge, much broader and flatter than the European kind — almost the size and shape of a mango seed.  Ifi is often sold at the market in the following way: the flesh is first boiled or steamed, and then the steamed nuts are strung together with a coconut frond cord so that it makes a rather attractive garland of sorts.  The taste is a matter of preference obviously (I didn’t really care for it) but the presentation is awesome. 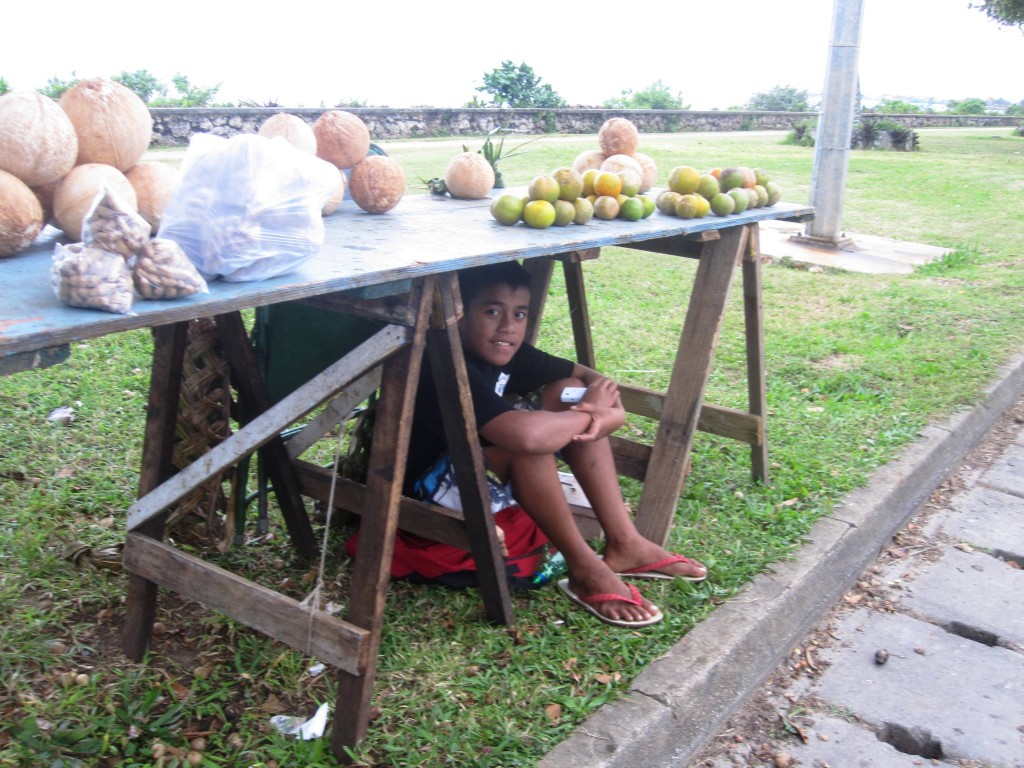 Another note on nuts:  I’m pretty sure that many of the trees along Vuna Road, the ones with flat, wide-ish leaves and dainty, oval shaped seeds that are pointed at the ends, are Tropical Almond trees, but I’ve never seen anyone harvest them.  Teuila, the Peace Corps nurse Sam worked with in Samoa, identified these to me on a trip to Samoa and said they are sometimes eaten there.  Finally, Candlenuts (Tui Tui) are ubiquitously harvested in Tonga and used for making cosmetic oils, often found at the market in plastic bottles with various flowers marinating within for fragrance.  I’m not sure if Candlenut is  ever used in Tongan cooking (I’ve never seen or heard of it), but since they are a frequent ingredient in other international cuisine, I thought I’d mention them here. 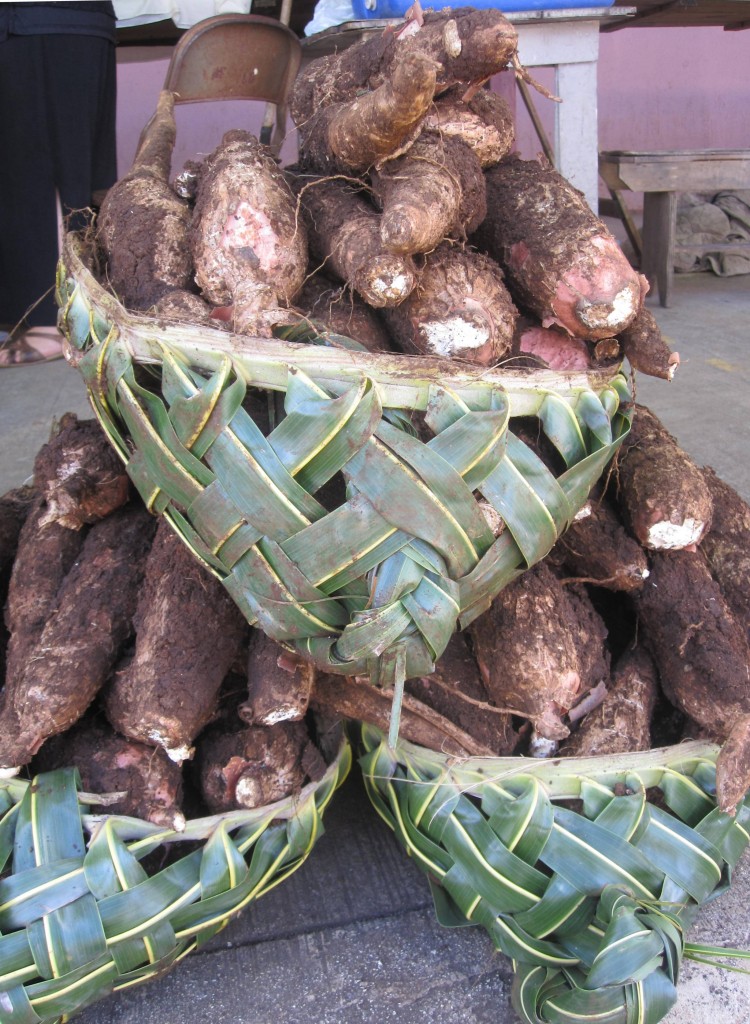 Locally grown Root Crops:  Breadfruit (Mei — seasonal — and yes, this one is a misnomer as it grows on a tree), Tapioca (Manioke and sometimes, Cassava), Sweet Potato (Kumala), Taro root (Talo), Yam (‘Ufi), Potato (grown locally by some vendors at the market, but mostly imported).

VEGETABLES  (This one is a catchall, so for any botanists out there, I’m classifying anything eaten in a vegetable-like manner as a vegetable.  ‘Kay?)

Indigenous Veggies:
Pele (a leafy vegetable sold in huge clusters.  The leaves are usually multi-pronged and the texture is a bit slimy when cooked) and Taro Leaves (Lu).  A note on the taro leaves: as mentioned in the previous Root Crops of Tonga post, these leaves must be thoroughly cooked to de-activate the calcium oxalate which can otherwise cause health problems such as mouth sores and even kidney stones. 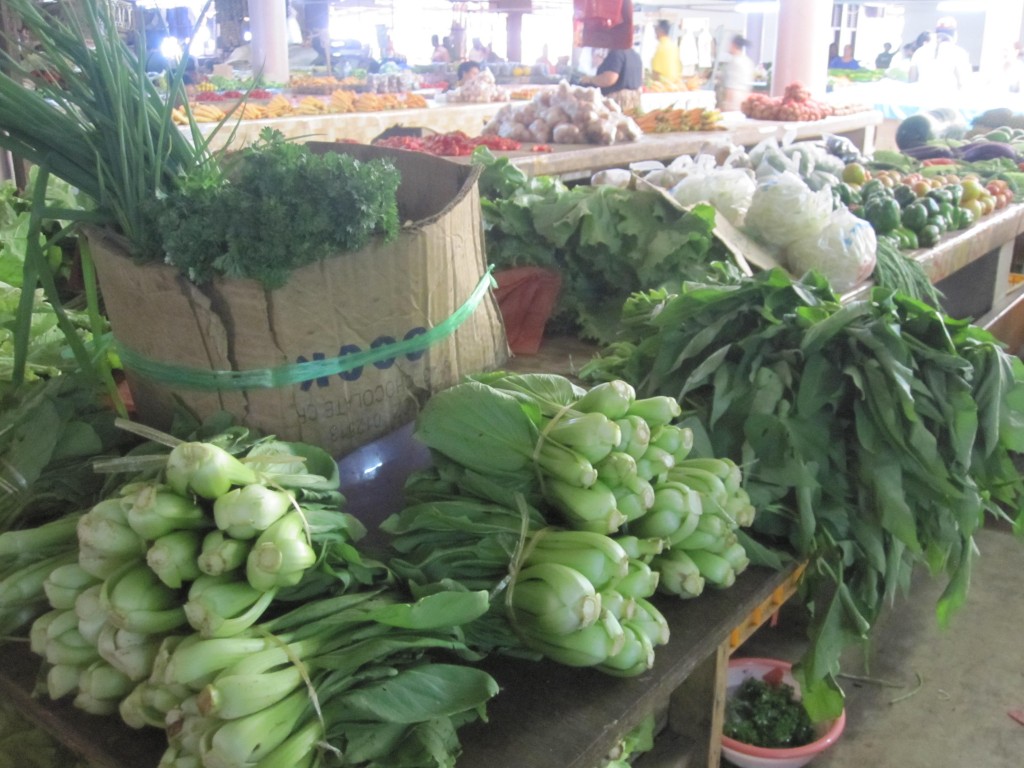 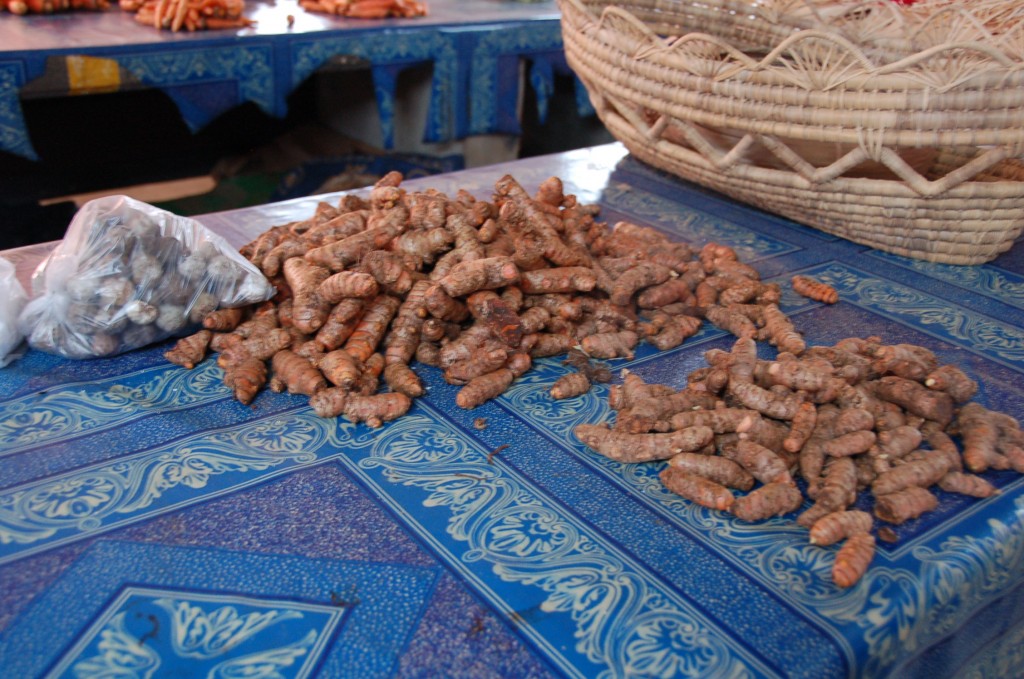 Locally Grown Herbs and Spices:  Garlic, Basil, Mint, Cilantro (usually called “Coriander” at the market), Fennel, Ginger Root (Sinisa), Turmeric Root (looks similar to ginger (as it should — it is in the same family) — but skinnier roots with usually a darker orange-ish exterior), Chili Pepper (all kinds of varieties), Chive, Vanilla, Parsley.

It takes a while to figure out which vendors sell what, but hey, that’s part of the fun, isn’t it?  Once you’ve sussed out your produce, you can continue through the lower market until you reach the handicrafts section, a post I’ll follow up with next.  Or, head upstairs to buy t-shirts, CD’s, get key duplicates made, or purchase more souvenirs. 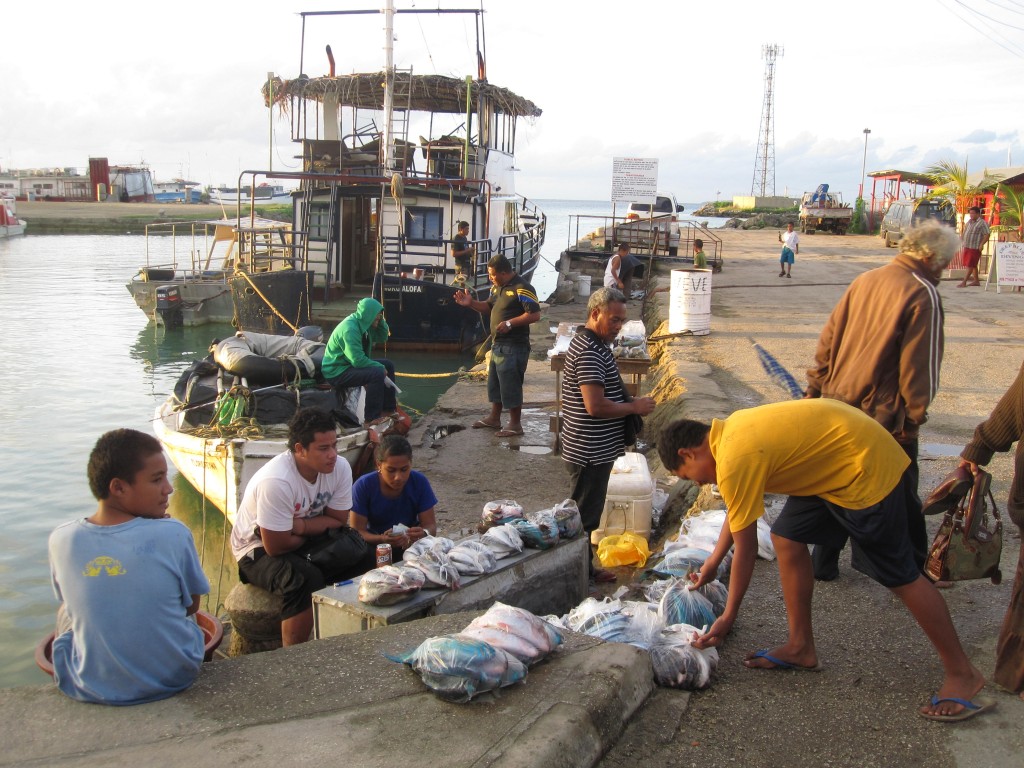 Once you’ve finished with Meketi Talamahu, you’ve still got the fish market down Vuna Road, in that swath of concrete just before the tiny ferry terminal to the resort islands of Fafa, Pangaimotu and ‘Atata.  Since seafood in Tonga is not traditionally kept on ice, it’s advised to hit the market as early as possible to ensure freshness. 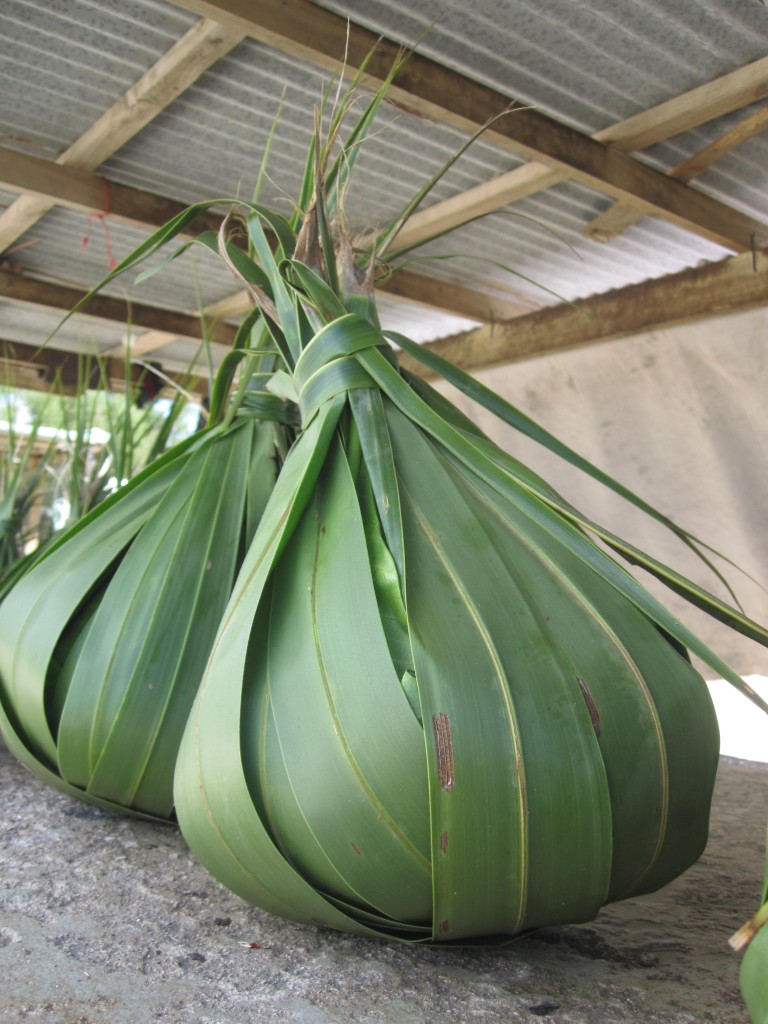 But if you’re like me, you’ll inevitably make your way there a little later in the day.  If so, there are now a few other places to buy fish that is sold on ice.  One location is Pacific Sunrise, a local company located at the backside of the Wharf that hosts the ferry terminal to Eua.  Another location is slightly further down Vuna, in the next section of parking lot where a government-run stall complete with stainless steel trays (and, normally, ice) rents space to vendors.  If locally caught isn’t so important, but being kept on ice is, there is also a frozen fish store just beside Waves Cafe that sells pre-sliced and flash-frozen fish hailing from Fiji. 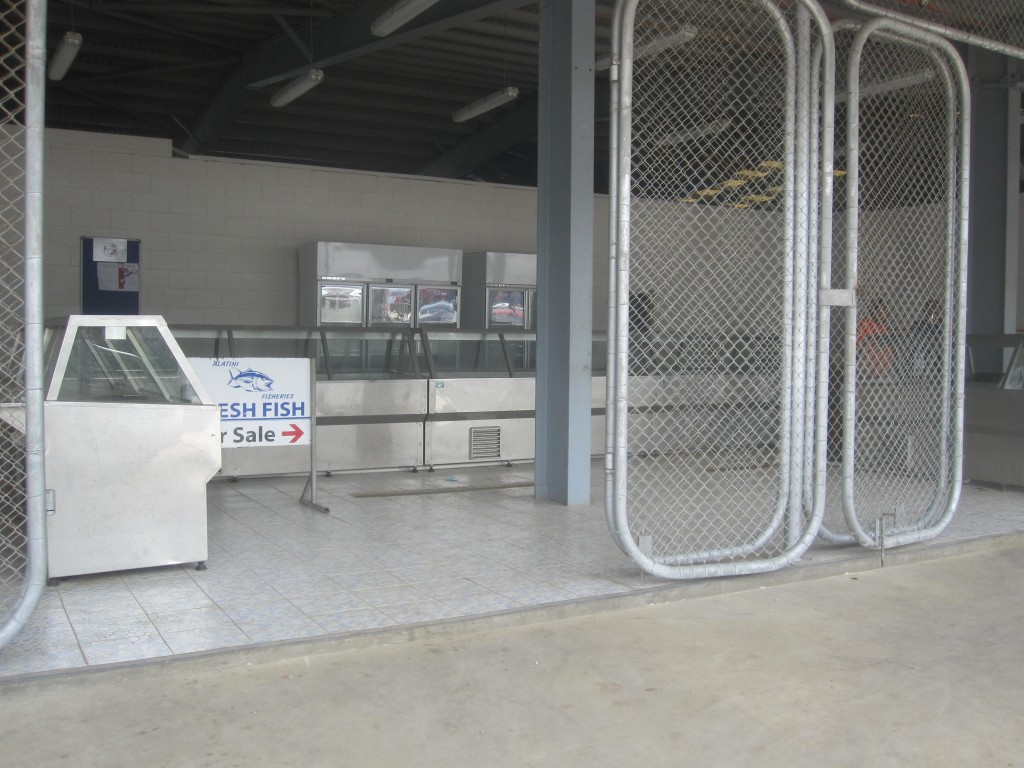 But wherever you end up going, it’s always fun to check out the amazing seafood these waters offer up, not to mention the esthetic arrangements like the sea grapes featured above, compliments of the ever-useful coconut frond.  Here are some of my favorites:

Parrot Fish (called Menenga Sikatoki, Menenga Kalia, and/or Hapatu — and I have no idea which is which).  These colorful reef fish are sold whole, often, depending upon the size, by the bag.  But be careful!  The liver contains a gland that is poisonous.  If you just eat the flesh anyway, then gutting and cleaning should keep you safe.  But if you are an individual who likes fish liver, make sure you get someone who knows what they’re doing to clean it for you first. 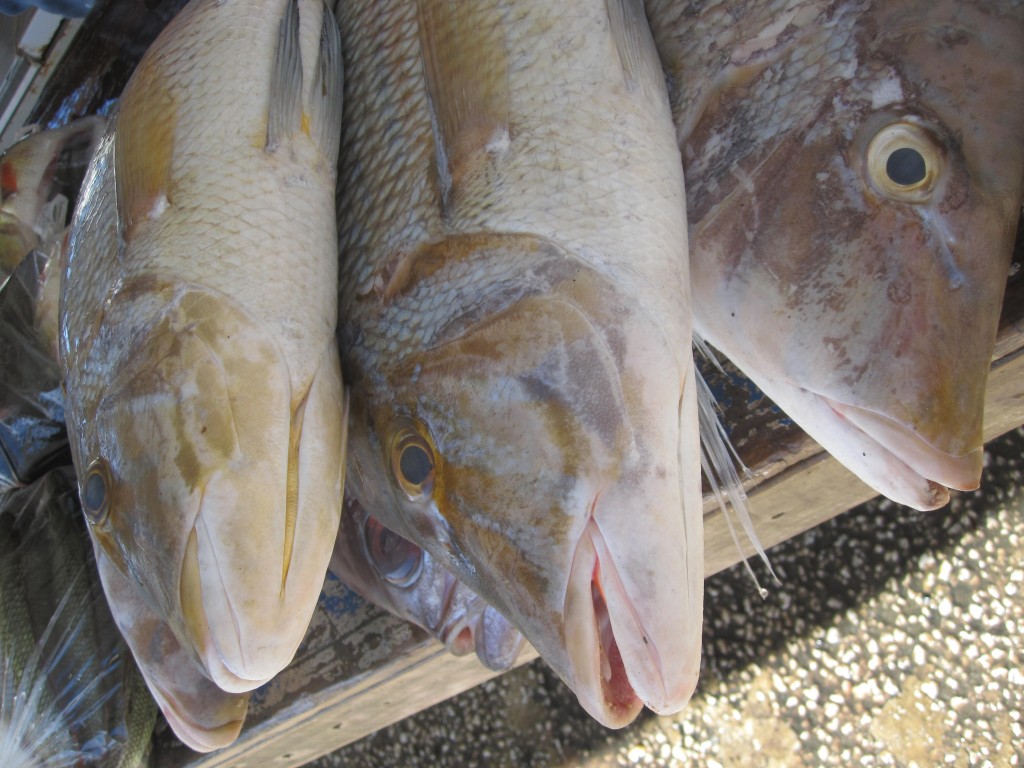 Snapper (or a related family, but typically, it’s all just called “Snapper” or Hoputu, Koango, Kulapo and/or Mohuafi).  Snapper is normally sold whole and charged by the kilo.  At times, you can request the fish be scaled or fileted for a little extra.

Tuna, which, between that and the swordfish are the grand-daddy fish of Tonga.  Tuna is sold by the chunk, usually by at least 2 kilos. 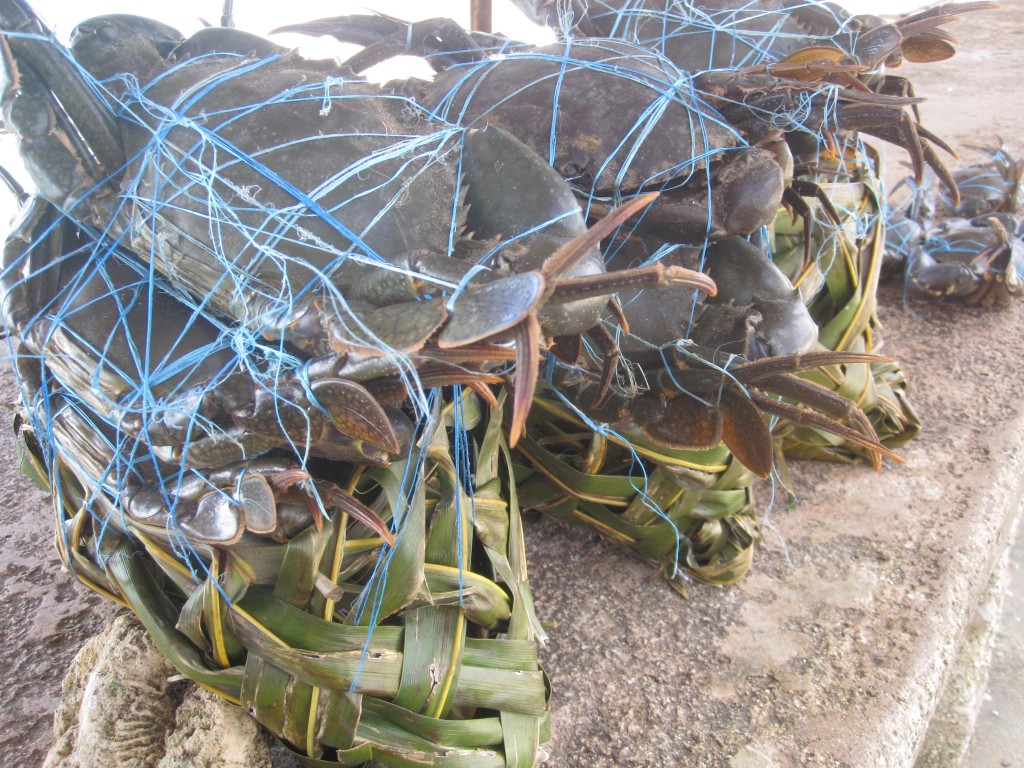 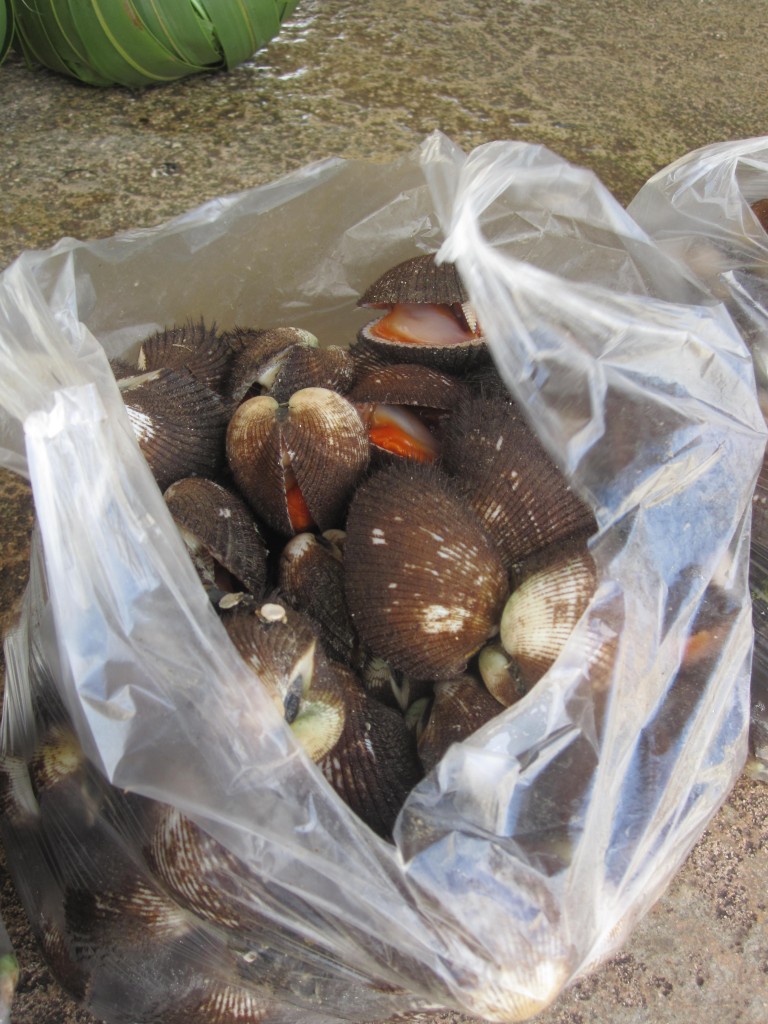 Many of the shellfish, sea snails, sea cucumbers and anemone are often eaten raw.  Once when Sam and I were in Samoa for his work, we saw how people collect them.  Perhaps I’ll post on that later.

At any rate, if for no other reason, living in Nuku’alofa has this definite advantage over other isles: amazing produce that combines the best of Tonga’s indigenous crops with those cultivated from elsewhere, and a variety of seafood available daily.  If you have a pot, a stove and a little time, eating fresh is as easy as it gets here.

9 thoughts on “Fruit, Vegetable and Fish Markets in Nukualofa, Tongatapu”