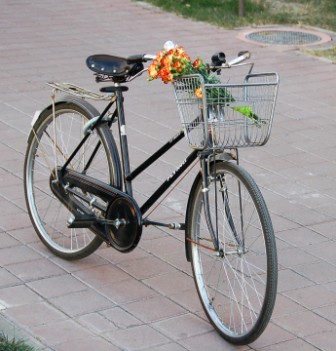 *This article on my experience locating and purchasing a genuine Flying Pigeon bicycle in Tianjin, China was published in JIN Magazine‘s January 2014 issue, and re-posted on the government’s tourism site, exploringtianjin (dot) com.* (UPDATE: Upon review, it appears that the article has been moved to a new China Daily website, so I have updated the link)

Due to word-count limit however, I wasn’t able to provide as much history on Tianjin’s famous Flying Pigeon bicycle as I would have liked.  So, without further ado, may I present the article as originally intended:

The Flying Pigeon bicycle is touted as the most popular bicycle brand in history.[1]  First produced in 1950 by the same Tianjin factory that had made Anchor and subsequently Victory brand bicycles, the 20-kilogram, one-speed, all-black design was created to emulate the popular 1930’s style English roadster.[2]  The name “Feige,” which actually translates to “Dove,” was chosen to symbolize peace during a time when war blazed throughout Korea.[3]  For whatever reason, “Flying Pigeon” won out in English parlance over “Flying Dove,” and the rest, as they say, is history.

History of the Flying Pigeon Bicycle

In record time, the Pigeon took off, and during the Cultural Revolution, bicycle travel became China’s approved form of transport.  By the 1960’s, the Flying Pigeon was so popular in China that the brand was synonymous with the word for bicycle — so much so that by the 1970’s, post-Mao leader Deng Xiaping declared that China’s economic prosperity could be measured by “a Flying Pigeon in every household.”[4] It is reported that during this time, 10,000 Pigeons were built each day in Tianjin at its downtown factory, employing 15,000 workers.[5]  By 1986, the Flying Pigeon soared to its zenith in popularity, selling 3 million bicycles (all in black, of course!) to a clamoring public.[6]

Where to Find a Flying Pigeon Bike in Tianjin

All that is well and good, but after learning about the Flying Pigeon’s history, I wanted to find one of those clunky, all-black, 28-inch wheel originals, circa 1950.  Should be easy enough, right?

Armed with good cheer and determination, I set off to find my Flying Pigeon a month after arriving in Tianjin.  I asked locals and expats alike where I could find one of these archetypal behemoths, only to be met with blank stares.

“Just go to the Giant store,” most foreigners would say.

“You can buy a bicycle at practically any market,” most locals would tell me.

No one understood my determination to procure a Flying Pigeon bicycle, and in particular … yup, you’ve got it:  Old-School-Style.

Undeterred, I visited online vendors, shops, malls, the “White Market” and even the far-flung North China Bicycle Shopping Mall in the Hebei District (did you know that the 906 bus takes you all the way out there?  It does!).  The latter came closest to my quest, but alas, all the Flying Pigeons on offer were decidedly newer styles.  I did find my antique version at one dusty shop, but upon pointing excitedly at it, the shop owner glanced from me to the bicycle and shook his head.

“No!” he said in disgust, and then jabbed an impatient finger at the flabby tires and bent wheel.  Clearly, I had absolutely no taste.  Why would I be looking at that sorry thing when he had all of these beautiful, shiny new bikes for sale?

No one, it seemed, had an original-design Flying Pigeon for sale.  I knew the roadster models were still being made because I found them featured on the factory website.  After a few more unsuccessful shop attempts, I convinced one of my husband’s co-workers to call the Flying Pigeon factory for me directly.  The co-worker obliged, only to be informed by customer service that the factory does not deal with individuals, and that I should purchase my bicycle at a store like everyone else, thank you and goodbye.

The bewildered co-worker relayed this correspondence in apologetic tones.  “They say there is a retail shop on Binjiang Dao,” she added.

Now, I already knew of this shop.  I had inadvertently discovered it while wandering around lost one day.  Seeing the blue and white Flying Pigeon sign from the dusty street, I had entered, taken stock, pointed to a few potentials, had the clerk write down the price for me and then left.  The reason why that visit had not ended my quest was because the only female-style frame I could find had smaller wheels than the roadster version, and I really wanted those 28-inch rims.  Also, the frame just didn’t seem as sturdy as what I had grown to expect, so I was doubtful as to whether this bike was truly of original design.  Finally, I had actually hoped to find a used bicycle instead of buying new.  Not stolen, but used.  I thought it would have more character. 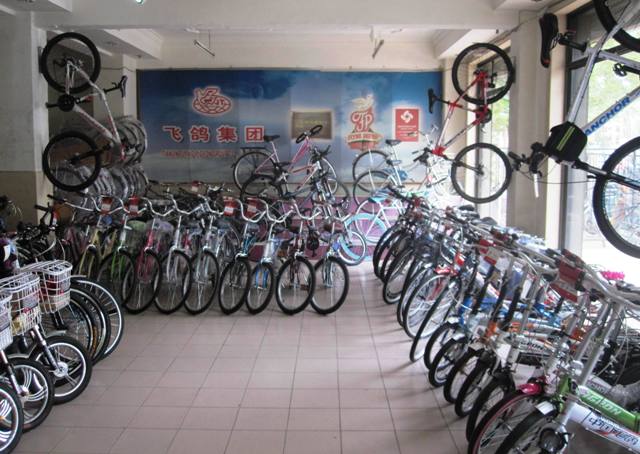 Having exhausted all mainstream resources, I had one unexplored option remaining.  I knew it was of questionable ethics, however, because that option was offered by someone who suggested in cryptic tones that I “look under the bridges.”  Little more was said of the matter than that, but I concluded that “looking under the bridges” most likely involved the acquisition of chattel originally obtained by dubious means.  I’d like to say that I dismissed this prospect immediately, but I can not.  Let this serve as a warning to others:  When you set your sights on a Flying Pigeon, it will lead you down dark and treacherous paths.

And so, my search for a Flying Pigeon brought me to the bridges of the Hai River one Saturday.  I had convinced myself that, should I find said bicycle under one of these structures, it did not necessarily mean that it was a stolen good.  It could simply be that the owner wanted to rid themselves of such an antiquity.  Or it could be that a student wanted the cash to upgrade to an electric bike.  It could be any number of reasons … right?

That day, I discovered all sorts of things under the bridges of Tianjin.  I discovered flutists, accordion players, opera singers, chess teams and tai chi troupes.  I negotiated my first bargain (a mortar and pestle) from the flea market on the top-side of one of these bridges, watched crabs trawled by giant nets and snapped portraits of ruddy-cheeked fish mongers.  But I did not find my Flying Pigeon.

At this point, I knew there was only one thing left to do: return to Binjiang Dao. 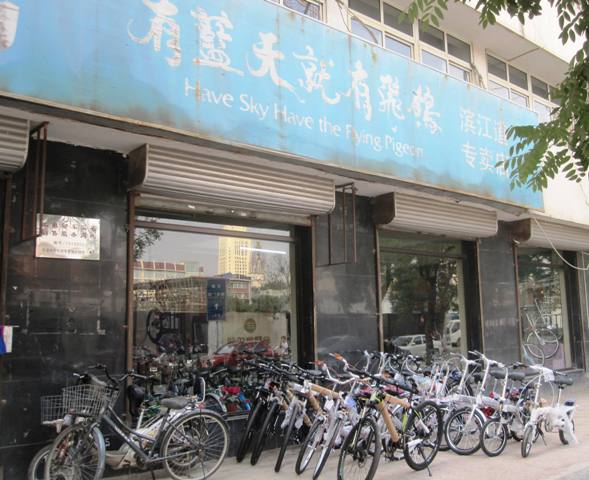 This time, I brought my husband Sam with me since he wanted a Flying Pigeon, too.  Upon arriving, we were greeted by four cheerful men in blue shirts, who did not seem to mind that we had interrupted their game of cards.  As with the first time, I pantomimed my desires:

The black, 26-inch-wheel bike with the female frame for me and the black, 28-inch-wheel (lucky guy, that husband of mine) male frame for Sam.  I even took one last stab at finding my ideal bike size and motioned between my bike-to-be and Sam’s, then to the tires, indicating my hope for 28-inch wheels as well.  The man I was pantomiming with smiled at me – eureka! I’ve finally done it! — and then he made an exploding motion with his hands.  Apparently, I had quite successfully mimed the repercussions of over-inflating one’s tires.

I sighed in defeat.  I nodded okay.  And then I began pantomiming anew, indicating our need for bike baskets, a light and maybe even a bicycle lock.  It all made perfect sense.

This time, the man just laughed.  He held up a finger mid-bicycle-lock-motion, swiveled on his heel and promptly marched out of the shop.  I glanced around the room.  Sam was on the other side pretending not to know me and the other three workers were affecting sudden absorption in their game of cards, at all costs avoiding eye contact.

I was relieved when, two minutes later, the man returned with a younger man in tow.  The younger man explained somewhat nervously that he was a student and that he could help translate.  Delighted, Sam and I resumed our requests, and after several back-and-forth’s, we succeeded in obtaining bike baskets, bike locks and even (to the consternation of everyone there, because “No one uses bike lights in Tianjin!”) two battery-operated, handle-bar mounted lights.

Next came the assembly of our Flying Pigeons (the shop has display models assembled only), which was completed in record time.  Sam and I were a bit nervous about the expediency of assembly, but we had no choice but to go along with things at this point.  We did a little test run outside the shop, tried to ignore the wobble in the pedals (Sam is a veritable genius with bikes, so I had faith he could tune ours up once home), paid our bill and left.  Our friendly shop clerk called out a final translation:

“Come back in a week for a tune up once all the parts have settled!”

We weren’t sure what to make of that, but we said, “Hao.” 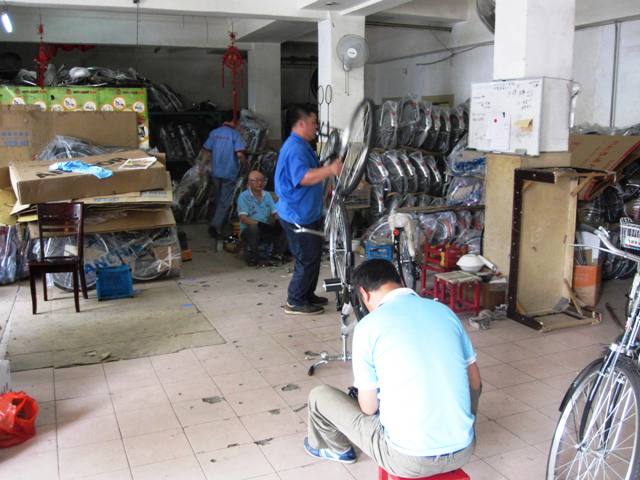 And then we were off, flying the wrong way down honking streets on our new, shiny black-and-chrome Pigeons.  People actually stared at our bikes in appreciation; it surprised us, really.  Two people asked where we had acquired our bicycles and a police man gave us a thumbs-up at a stop light.

Generally speaking, the wobbly pedals and rattling frames and general lack of effective brakes (one has to sort of run along with one’s feet to really stop the thing) seemed a small sacrifice for the genuine enthusiasm of having invested locally.  Of course, we also lost two frame bolts along the way and discovered a missing spoke on Sam’s back wheel.  But we were so happy to finally have our bicycles that we cheerfully wobbled our way home.  The next day, we found some replacement bolts, did our best to re-align the brake pads and made some other adjustments.

It has now been over four months since we’ve purchased our Flying Pigeons from that shop on Binjiang Dao.  The “chrome” of our handlebars is now a rusty orange, our pedals have fallen off a few times and our brake pads continue needing adjustment.  On some weekends, Sam spends more time fixing our bikes than we do riding them (although we do ride them a lot).  To be honest, I do not think our purchases live up to the “built like a tank” reputation that the Flying Pigeon roadster established.  I have since borrowed a friend of mine’s newer, cruiser-model Flying Pigeon (while my bike was in repair) and the cruiser model was far sturdier, smoother, and of superior quality overall.  But as nice as my friend’s bike is, I still wouldn’t trade it for my wobbly clap-trap.  And even though the factory might indeed have the roadster style with 28-inch wheels on a female frame, I’m sticking with the one I’ve got.  Because that Pigeon is my Pigeon, rusty joints and all.

[1] Koeppel, Dan (2006). Flight of the Pigeon. Bicycling.  (UPDATE: The 2006 Bicycling article originally referenced here is no longer available on the internet, but it appears to have perhaps been essentially reprinted under a new title here.)

[4] Koeppel, Dan (2006). Flight of the Pigeon. Bicycling.  (UPDATE: The 2006 Bicycling article originally referenced here is no longer available on the internet, but it appears to have perhaps been essentially reprinted under a new title here.)