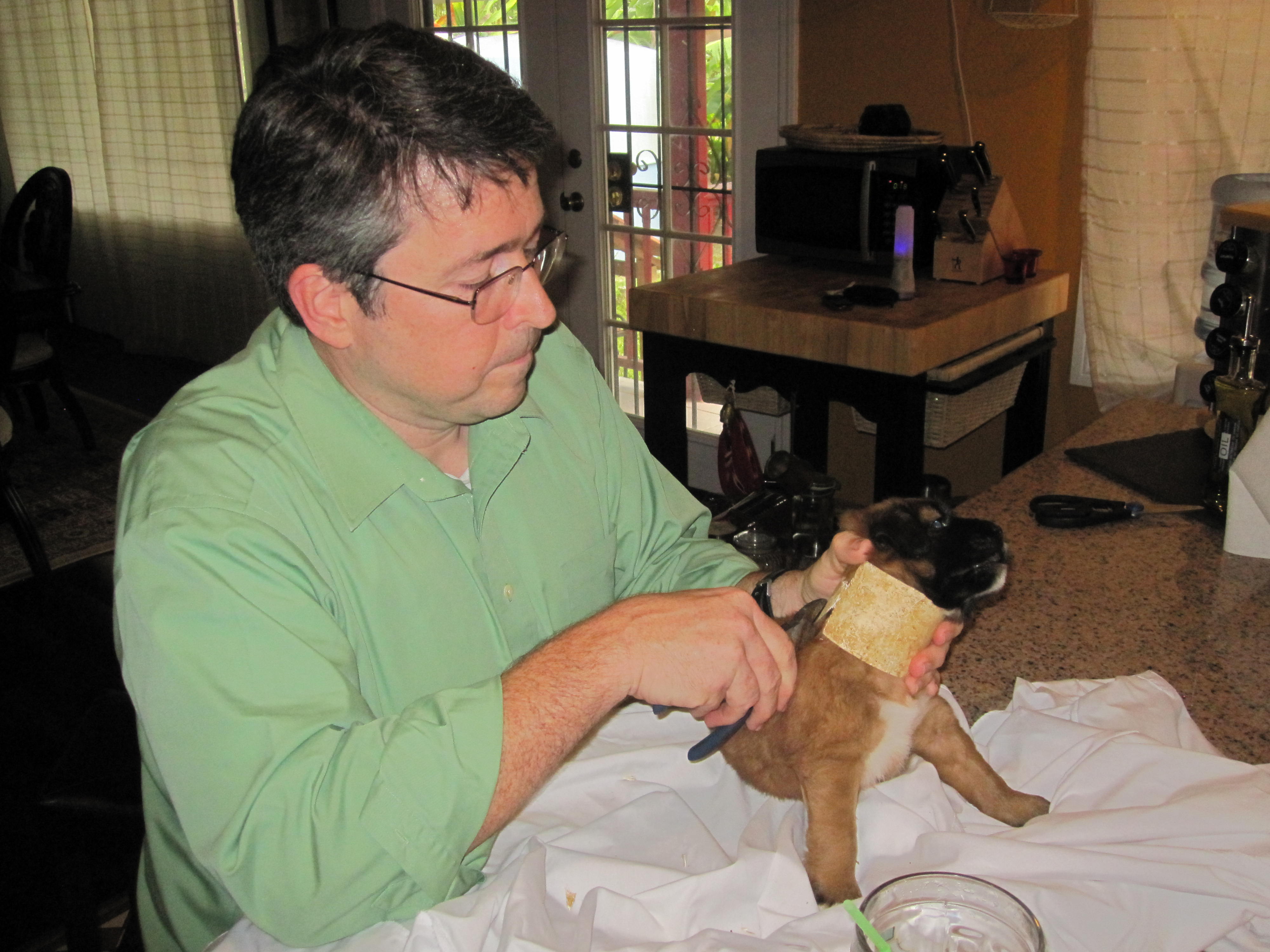 Tonga can be a hard place for dogs, and presumably for this reason, our adopted dog-who-still-won’t-let-us-pet-her, A/K/A “Ibu”, has been hiding her brood of two puppies deep under our back porch.  One of the puppies came out earlier yesterday and played with Sam a little during lunch time, but the other had yet to make an appearance.  So, when I returned from my run later that day, I thought I’d see if I could introduce myself to the absent member.

Ibu was in the backyard, acting happy to see me as she always does when food is involved.  I tried to pet her as I always do, and as expected, she sniffed my hands, wagged her tail, bumped her nose against me for a moment and then jumped back.  After twenty-one months, this routine has gotten a little old, but I tried to be good humored about it and simply looked around the porch area for her offspring who actually might act like pets.

I couldn’t find them anywhere, nor could I hear their funny, squealing noises that they normally make, so I asked Ibu where they were.  I’m not really sure why I did this, probably because I just wanted to see if she’d show them off to me, but Ibu just pranced around wagging her tail like she does when she’s waiting on her dinner.  But I didn’t give her any dinner, I just kept asking her where her puppies were, and eventually, Ibu walked off.

“She’s lost interest,” I thought to myself, but then Ibu stopped and sat down in front of a scraggly bush just outside the edge of the back porch.  I almost lost interest myself and was just about to go inside to take a shower when I decided to play along.  So I went over to the bush and looked around.  No puppies.  I got down on my stomach and looked under the porch (the porch is raised like a deck, and supported underneath by cinder-blocks) when, lo and behold, I thought I could just make out a furry blob somewhere in the shadowy distance!  But the blob looked funny — not quite right — so I grabbed my camera and returned to the scene, using my flash to pierce the shadows.

What did I see?  One of Ibu’s puppies as far back under the porch as it could go, lying in the dirt, with a 3-inch tube of PCV pipe around its neck!  I thought the puppy might have asphyxiated, so I called my excellent husband whose “other” profession, handily enough, just happens to be a veterinarian, and then ran inside to grab a long-sleeved shirt to protect me against  nasty, underworld dwelling creepy-crawlies.

Now, the nether-regions of our porch are riddled with enormous, hairy spiders and an exo-skeletal beast otherwise known as a molokau (a type of centipede, I gather, than can grow to a foot in length!) and I am by no means brave about their existence, so as I wiggled under the porch deck toward the puppy, I was definitely shaking more that he was!  When I reached him, I was relieved to see he was alive, but strangely calm, which made me even more nervous.  I picked him up and held him with one hand as I backed out on my belly, not sure if my method of retrieval was the best way to go about things.  By the time I got him back outside, Ibu was running around me, probably closer to me than she’d ever gotten before, looking extremely nervous.  Sam pulled up just as the little guy started squealing  and we brought him inside to figure out how to get that pipe off his neck.

We were both unsure how long he’d had that thing on there, not to mention astonished at the feat of getting the pipe over his huge head in the first place.  But our patient did not share our sense of wonder, and he began howling and wiggling so violently that it took a while just to calm him back down.  Sam didn’t see a way to get the pipe off his head “naturally” without potentially jamming it on him even worse, so he decided to cut the pipe off.  The problem was, the only tool Sam had for the procedure was a pair of wire clippers!  But our hero slowly clipped away at the pipe while I held the puppy and eventually, our newly christened Darwin was PCV-free! 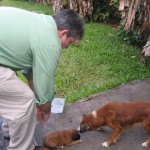 Sam handed Darwin back to his mama, who seemed pretty happy with the results, and then we coaxed the other puppy out from under the porch, just to make sure he was alright.   He was.  I checked the porch and yard area for any other items that the puppies might get themselves entangled with (which is a bit futile as trash is constantly thrown by whomever happens to be passing by) and then we left the happily reunited family in the back yard.

After all that, will Ibu let us pet her now?  Of course not!