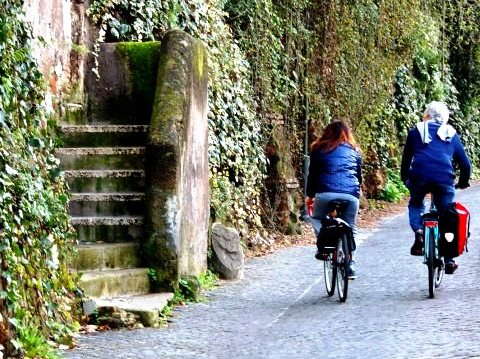 My earlier post about the holy month where we currently live got me thinking of my own favorite time of year: Christmas!

And though I am not Catholic, I especially love the way Catholics celebrate Christmas until Epiphany, January 6. Because otherwise, it’s kind of a bummer, right? There’s all this to-do leading up to the One Big Day, and then, as soon as you sacrifice a tree and rip open all those presents come Christmas morning, you’re only left to console yourself with the emptiness of materialism and debauchery of over-eating with perhaps a trip to your local church where you pretend to acknowledge what Christmas is really about. Nope, the Catholics have got it down: celebrate Christmas every day for twelve days straight! And what better place in the world to do that, than in Rome?

Sam and I were lucky enough to have a layover there this past Christmas holiday, and while we weren’t in Rome for all twelve days, we were there for Epiphany, which was amazing.

We did all the usual tourist stuff: eat pasta and gelato, drink wine, pose by every fountain we recognized from Art History classes of yore, watch pick-pocket gangs work the public bus system, stand in line four-and-a-half hours for entrance to the Sistine Chapel where we were continuously harangued by sneering priests with scary voices NOT TO TAKE PHOTOS, even though … we weren’t! (But hey, those priests make sure you can buy all sorts of stuff exploiting Michelangelo’s work in their nifty gift shop one must walk through to exit said chapel) ….

But the one thing we did in Rome that stood head and shoulders above the rest was … cycling the Appian Way!

The Appian Way, or La Via Appia Antica, is the first long-distance road constructed by the Roman Empire intended for military use. It originally stretched around 350 miles from Rome to the south of Italy where the Adriatic port town of Brindisi provides sea access to Greece. And this this thing is old. As in, La Via Apia was finished in 312 … nope, not AD/CE … but B-freaking-C! (Okay, fine: B.C.E.)

Despite the mind-boggling fact that the Appian Way is now 2327 years old, parts of the road’s original pavers still seal the soil while other stretches have been renovated with newer stonework. Along the 10-mile portion now conserved as a regional park, verdant countryside filled with mewing sheep, pretty little swaths of forest and crumbling castles and catacombs pepper the landscape with unbelievably photogenic scenery. This is also where two of Rome’s famous Christian Catacombs, San Sebastiano and San Callisto, offer hour-long underground tours where (“NO PHOTOS!”) one can gawk at the underground, graveyard labyrinths snaking miles long and deep into the earth, evidencing thousands of low-wealth Christians who were buried in tiny, stone tombs here back in the day.

In fact, many people come to the Appian Way just to visit the catacombs, and while I’m glad we took a tour of one (we  went to San Callisto), the cycling part is still my favorite memory of our time there.

How to get there?

Depending on where you are staying in Rome, the Appian Way is within walking distance, though it can be confusing to reach, thus resulting in quite a time commitment. Public buses are a quicker option for those on a budget like us, and then of course there are the gazillion tour companies you can sign up for if that’s more your thing.

For us, we’re do-it-yourself-ers, so despite the fact that it would have been far more economical on the time scale of things to be good little tourists and just buy those tour tickets, we … didn’t. As a result, we killed one whole afternoon walking the two-hour journey there, only to find the Christian catacombs would be closing too soon to fit in a tour, and any rental bikes would need to be returned within an hour, which hardly made the attempt worth it.

So, we skulked back to Rome and ate our sorrows away with a pizza.

Not to be defeated, the second day, we clutched our wallets with death grips and took the 118 bus, which stops right before the friendly Info Point Appia Antica where both catacomb tour tickets and bike rentals can be purchased. This time, we arrived around one o’clock in the afternoon, which left plenty of time to fit in a bike trip down the 10-mile stretch of road and back, and fit in a catacomb tour before closing time. Eureka!

4 thoughts on “Cycling the Appian Way”