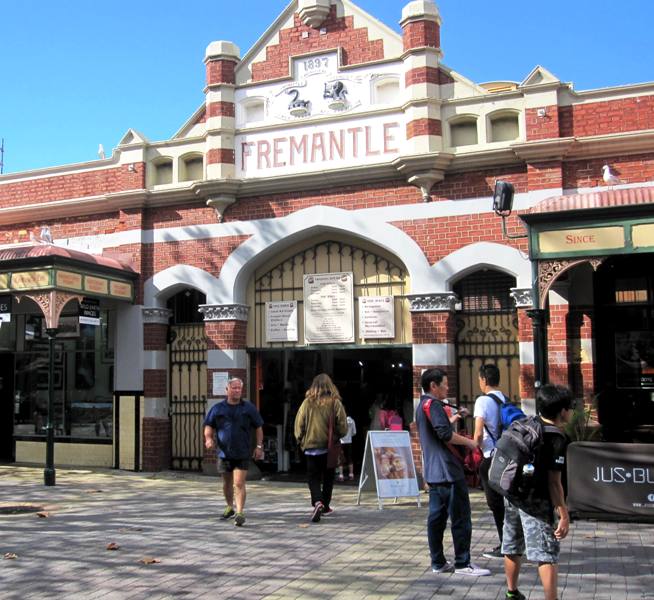 Ever considered visiting Western Australia and fancied cycling from Fremantle to Perth?

We did! Admittedly, when originally researching this activity from my little home office in Balikpapan, Indonesia, the prospect felt a little overwhelming. Turns out, cycling from Fremantle to Perth is super straightforward … and fun!

This is Part 3 of our seven day road trip through Western Australia (Parts One and Two found here), where we spent the last three nights of our tour in Fremantle — with an amazing self-drive to Pinnacles Desert with a stop to “sand surf” at the Lancelin Sand Dunes. Highly recommended! Here’s what the drive looks like on Google Maps:

The Town of Fremantle

Okay, so Fremantle is described in guide books as an artsy little suburb of Perth, more or less, and with that description in mind, we weren’t sure what to expect.

While Perth sits a bit inland along the banks of Swan River, Fremantle faces the Indian Ocean, and while it is a town by its own right, the excellent high-speed trains zipping regularly from Fremantle to Perth and back make the suburbia description seem fair enough.

Because we discovered upon arriving in Fremantle, that this town is anything but a suburb.

Fremantle has so much charm — tons of gorgeous old buildings, museums, universities, art and brick-a-brack shops, cafes, pubs and restaurants, markets,  streets paved with pretty bricks, green parks spilling out from town toward the harbor, street performers, mixed-use-trails, gorgeous white sand beaches right there in town, ferry services both the Perth (via Swan River) and Rottnest Island (via sea) … in short, this place is the quaintest, coolest little college town I think I’ve ever seen. But the thing I liked the most? You can cycle everywhere here: along the roads, on the mixed-use paths leading to beaches and to Perth, and even on the sidewalks! After seeing a bit of Perth and then seeing Fremantle, I’d chose to stay in Fremantle any day, hands down. And we both agreed Fremantle would be an amazing place to live … if you can afford it! 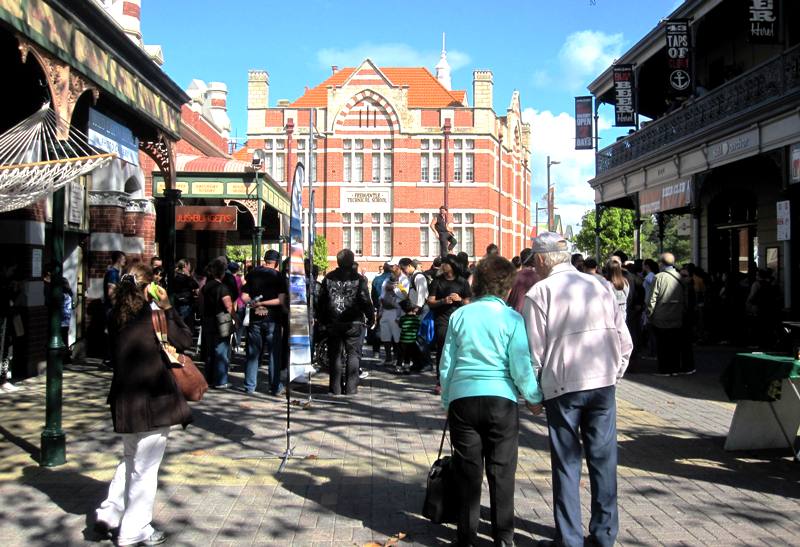 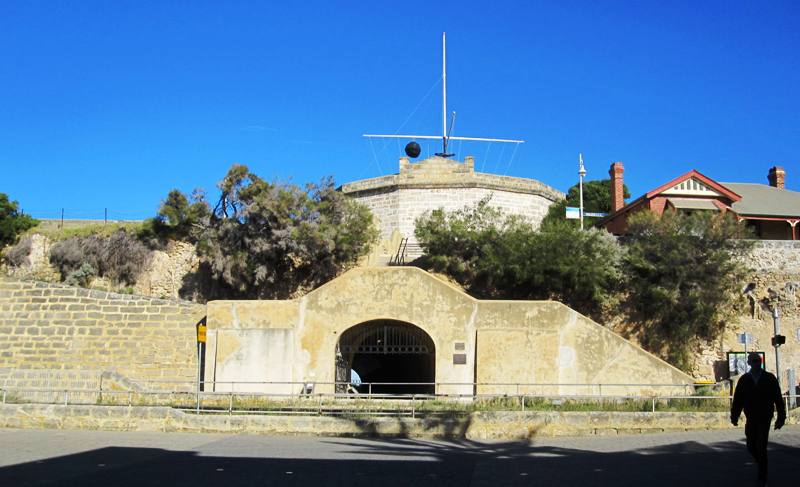 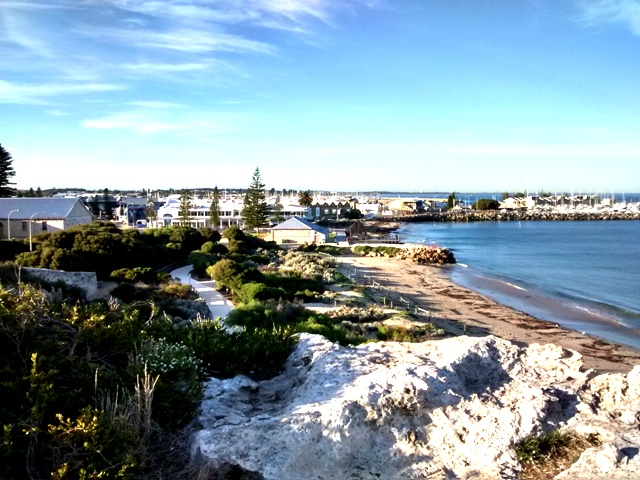 Like the rest of our trip within Western Australia, this town isn’t what one might describe as affordable, but we actually fared surprisingly well. For example, we lucked out on our room and snagged the last one at the perfectly located Fremantle Bed and Breakfast (5 Mouat Street, Fremantle; http://www.fremantlebedandbreakfast.com.au/; 0403945284) (about a two-minute walk from Fremantle’s historic Round House, featured above with a view of Fremantle’s harbours from the top of the Round House). The rooms here were cheaper (and cuter!) than others found on Trip Advisor and the location was amazing. We walked everywhere in town, and the only let-down was the issue of parking. Fremantle has really persnickety parking rules, and since there is no garage to speak of, Sam had to get up every morning around seven or so to move our car from one spot to the next to avoid getting a ticket. Yuck, right? Other than that, no complaints.

Where to eat in Fremantle on a Budget:

Food isn’t cheap either, but since Fremantle is a college town, we discovered at least one pub/restaurant in town has a nightly dinner special catering to college kids, where one can obtain an enormous plate of, say, chicken Parmigiana or sirloin steak for about $10 AUD, with often a half-off price on beer, too. Even with the specials, though, the cheapest beer I found was $7 AUD for a pint! Usually, it was around $15 to $20 AUD. For a pint! Also, we discovered the food stalls at E-Shed Markets near the ferry terminal and Fremantle Markets in town (both in the “Yard” area of Fremantle Markets and outside at Old Shanghai), both offering affordable lunches and dinners, so that’s always an option if you are budget traveling like we did. 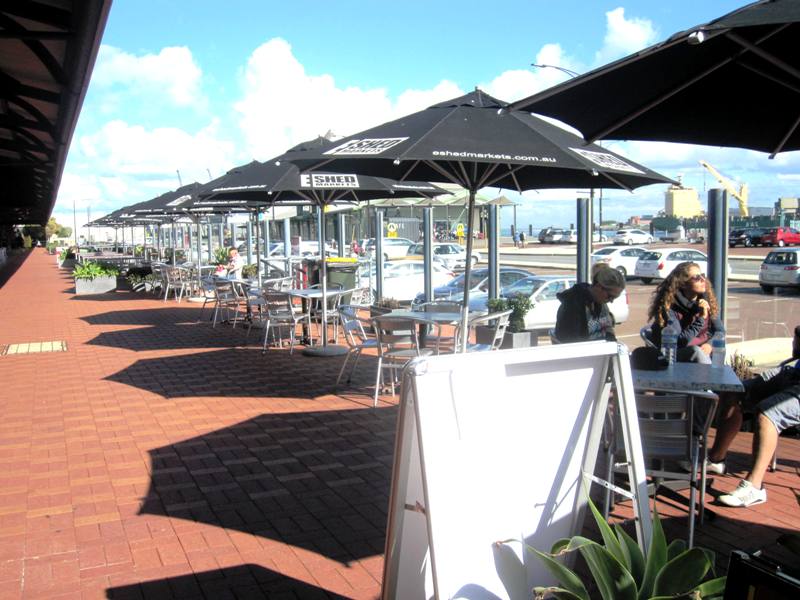 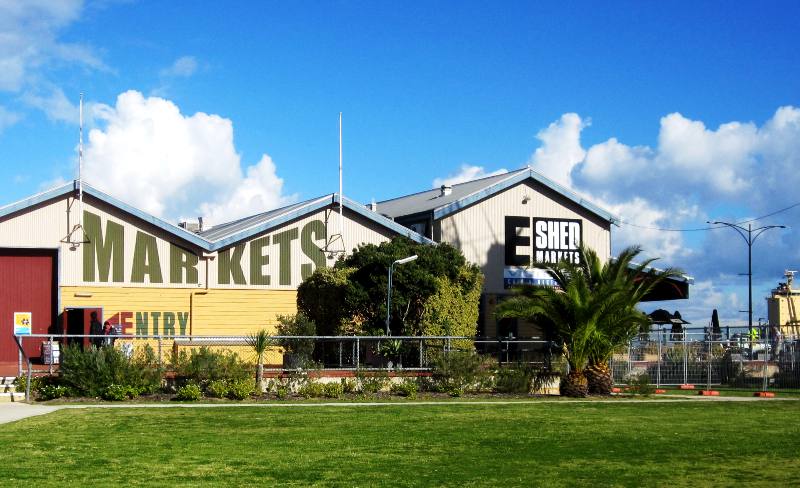 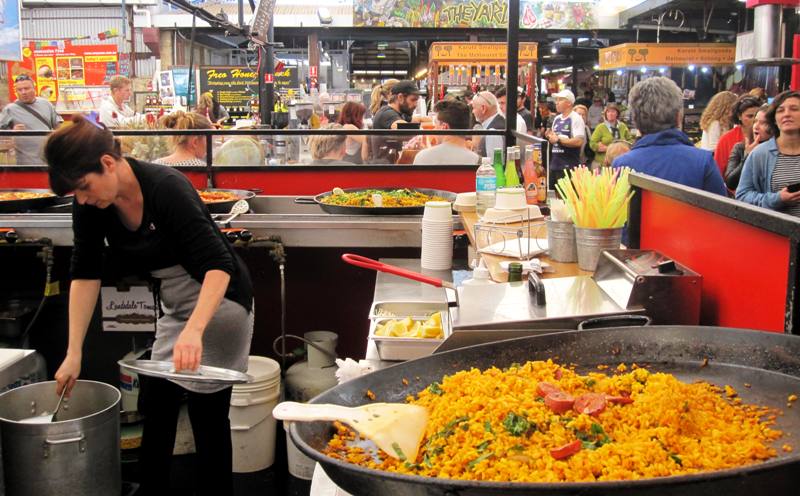 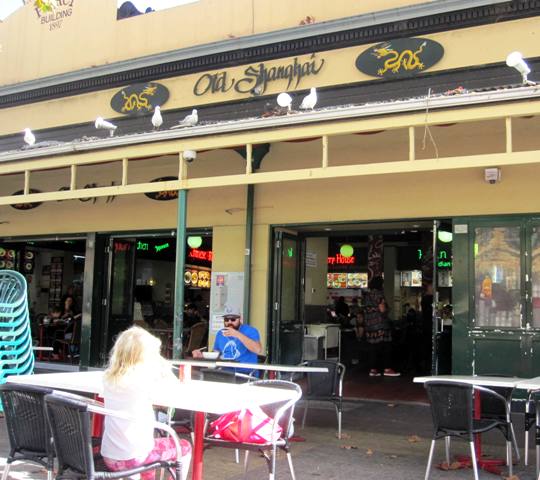 In addition to food, both E-Shed and Fremantle Markets are crammed will every kind of souvenir stall and handicraft you can think of, as well as produce and specialty food items, much like New Orleans’ famed French Market. They are fun to stroll through and people watch for a few hours. 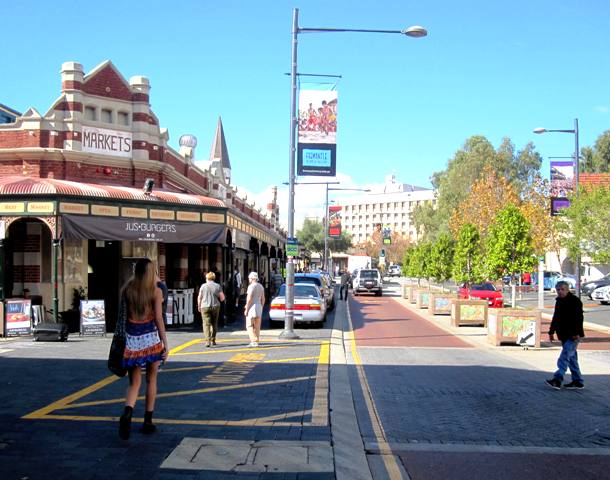 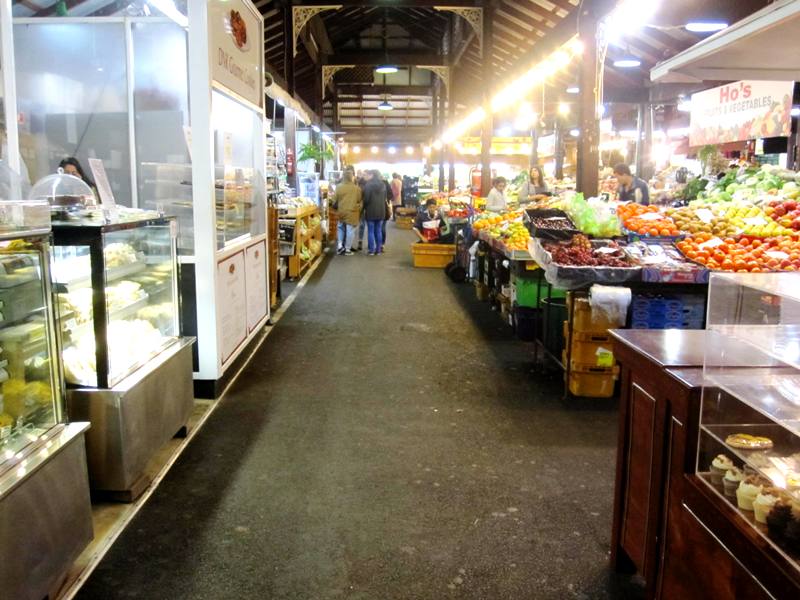 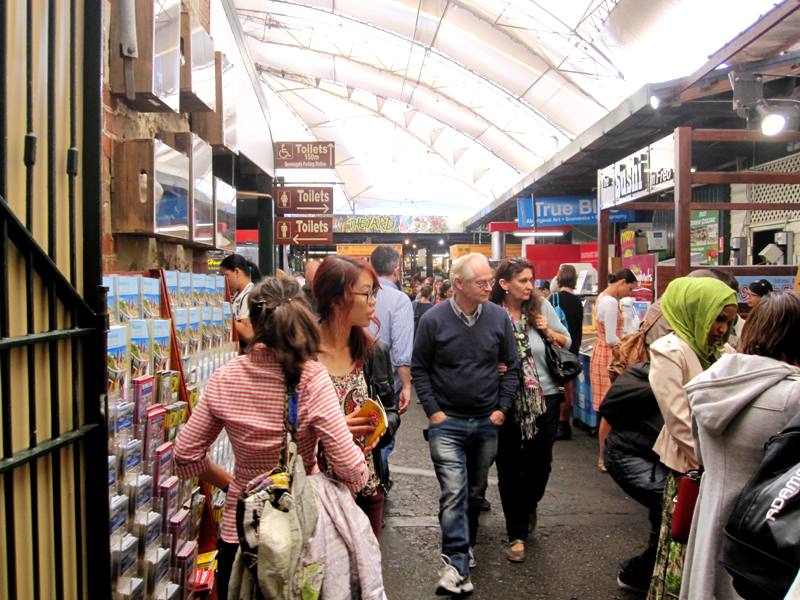 Fremantle has at least three restaurant-breweries in town. Aside from the highly-touted Little Creatures brewery on the wharf, we also took note of the Ball & Chain brewery/pub as well as Monk brewery/pub. We stopped at the latter for dinner one night and enjoyed a seasonal dark beer and a pizza-night special. While Sam’s pizza was a pretty good deal, I ordered a Caesar salad with chicken and was surprised to discover an exceptionally un-Australian, tiny portion of greens in a huge bowl … for 23 AUD! A salad! Maybe the Monk ran out of their greens or something? Well, the beer was good. 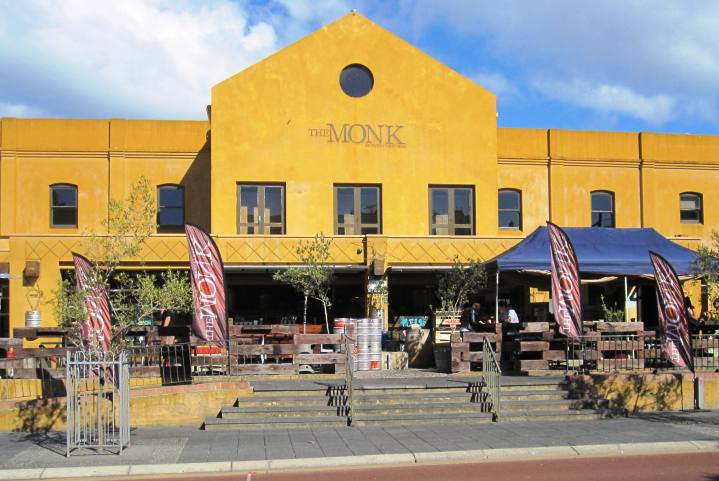 Cycling from Fremantle to Perth

As mentioned, Fremantle is a cycler’s paradise, with all kinds of routes to choose from. There are amazing mixed-use trails paralleling the beautiful Sunset Coast and linking to other towns, there are trails snaking in and out of the light rail stops on the way to Perth where you can hop on and enjoy the excellent public commuter rails (see below website for rules on taking your bike on trains), or you can simply wobble about town. If you fancy a cycling day-trip like we did, there a gazillion bicycling maps for the Fremantle/Perth area that you can download for free at www.transport.wa.gov.au/cycling.

Where to rent a bicycle:

Option 1, The Visitors Center. The visitor’s center in town actually loans cute, rickety roadster-style bikes for free (in exchange for your identification), but you will need to 1) ensure they have a bike to loan on the day you plan to cycle as they are quickly borrowed out, 2) the bikes are really intended to tool around Fremantle on, not take a day-trip to Perth, so you’ll want to decide on your scope of travel ahead of time and 3) the office closes around 4 in the afternoon, so you’ll need to be back in time to return the cycles.

Option 2, Bike Rentals. I am not sure how much these cost, but we noticed a few rental shops on our last day in Fremantle, one of which was E-Bikes at the end of E-Shed Market. I think they had normal push-bikes as well as electric cycles.

Option 3, Auto-Rent via credit card from the bicycle kiosk just outside The Esplanade Hotel. This set-up is similar to bike share programs in US cities such as Denver or DC, where you can rent a cycle for a few hours or a day with a swipe of a credit card, without having to go to a shop. Once purchased, the bike automatically unlocks from the kiosk and you are good to go. Helmets and bike locks can be had (included in the purchase price) just inside the Esplanade Hotel upon presentation of receipt. I think the price for a full-day rental was about 13 USD per bike. This is the option we chose and these sturdy, roadster-style bikes were pretty good for a day trip to Perth and back!

Cycling from Fremantle to Perth Trails:

The Fremantle to Perth Beach Trails

For our cycling day-trip to Perth, we followed the fantastic trails paralleling beaches all the way to Cottlesloe Beach, (which is considered one of Perth’s beaches, though it is actually its own beach town) then hooked a right and more or less followed the light rail into Perth, where bike trails continue to weave through the suburbs. We stopped along the way for photos, etc., but I think the trip (one way) took us about two hours at a leisurely pace. The closer we drew to Perth along the light rail route, the grungier things got, but for most of the ride, the trails were in pristine condition with equally pristine views. And I’ll say that, in Perth’s defense, for Western Australia’s metropolis, even the seedier sections of town still looked a lot cleaner (and safer) than most big cities in the US. 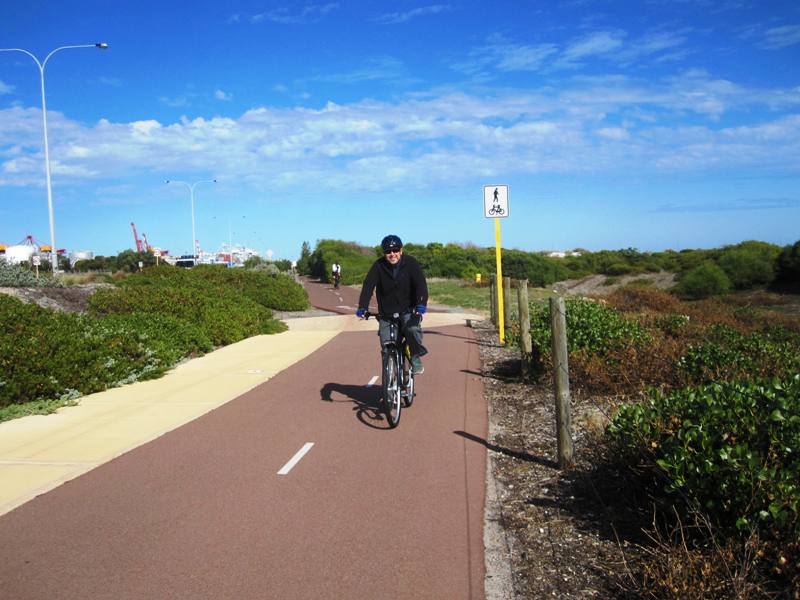 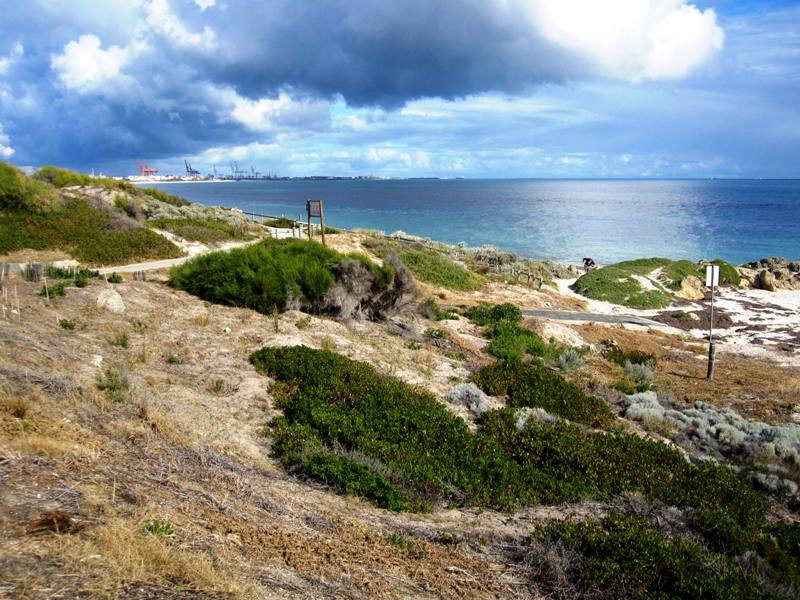 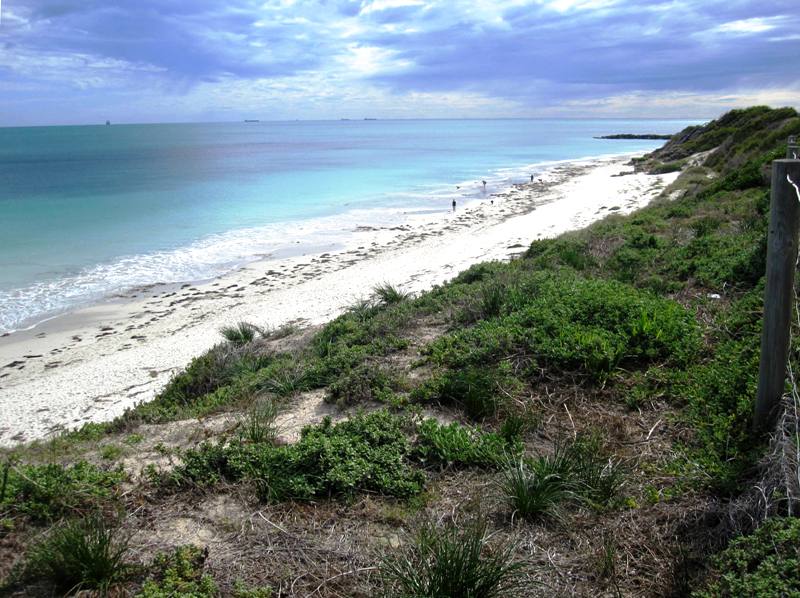 Cycling to Kings Park in Perth

Once in Perth, just follow signs to the city’s celebrated Kings Park, where cycling and running paths weave for kilometers between natural bush, ponds and an enormous botanical garden where the oft-photographed Federation Walkway (a/k/a Tree Top Walk Bridge) spans over treetops for a view of Swan River and Perth city center. 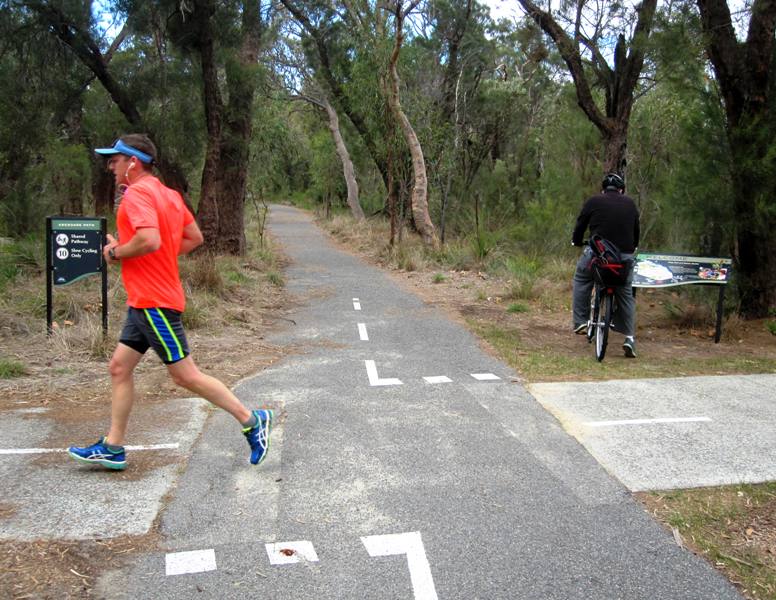 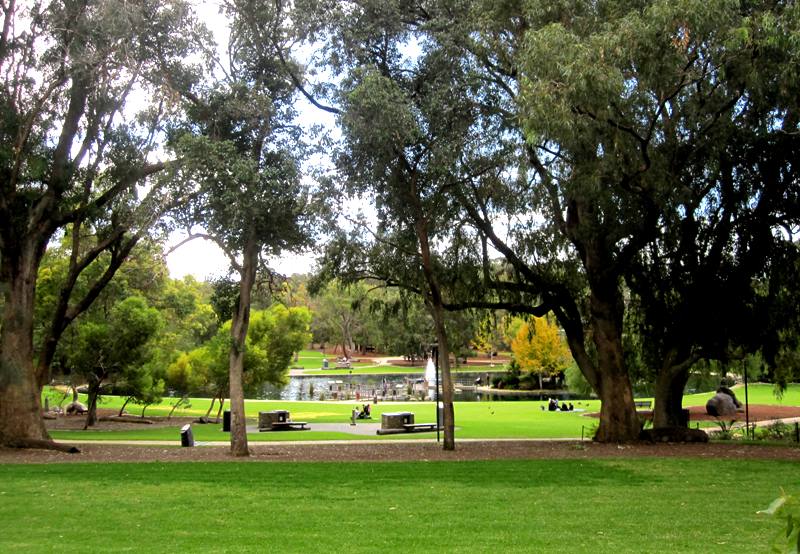 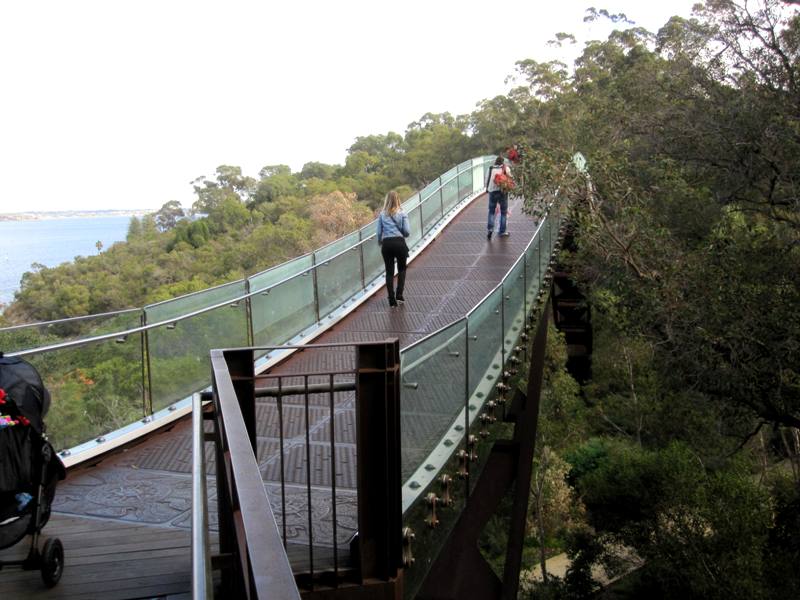 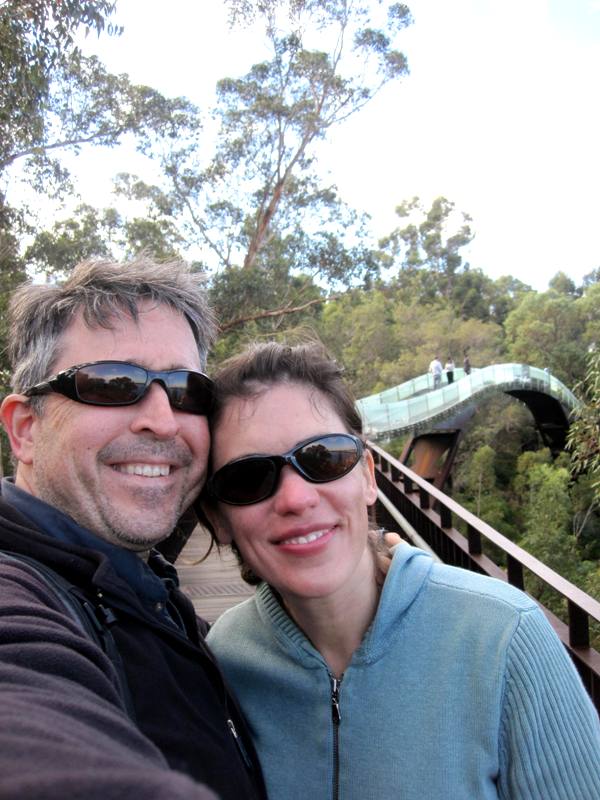 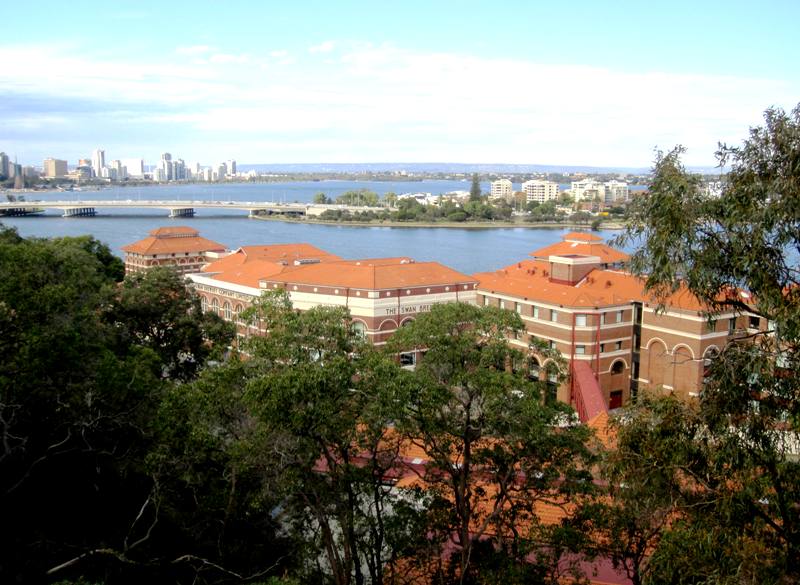 From Kings Park, it’s an easy roll downhill into the city center, where we locked up our bikes on the pedestrian strip along Murray and Hays Streets and had a coffee at one of the many cafes there. We tooled around a bit in Perth’s city center, which was a charming enough place for Western Australia’s capital — and clean — but I guess compared to the funky, fun-loving town of Fremantle, it felt a bit sterile to us. Still, I can see why one would enjoy living in Perth as you’ve got a clean, safe city with the amenities that come with it, the pretty Swan River, and amazing beaches just twenty minutes away. Not bad. 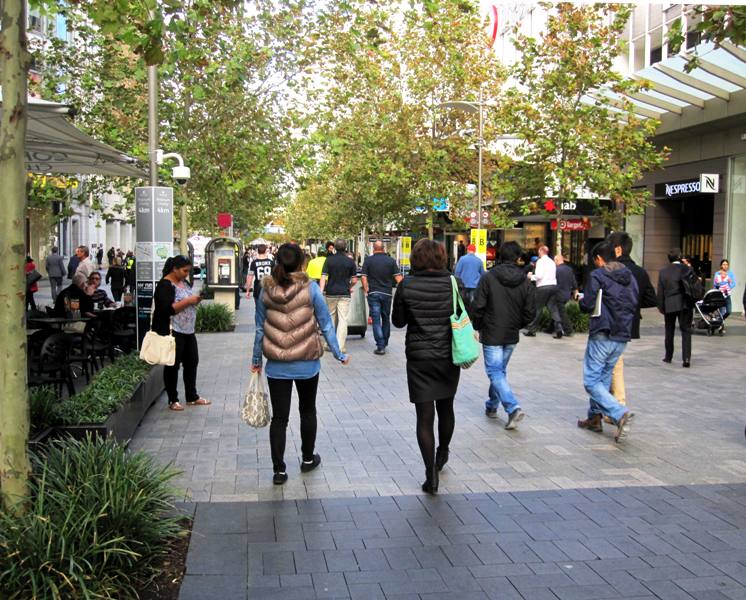 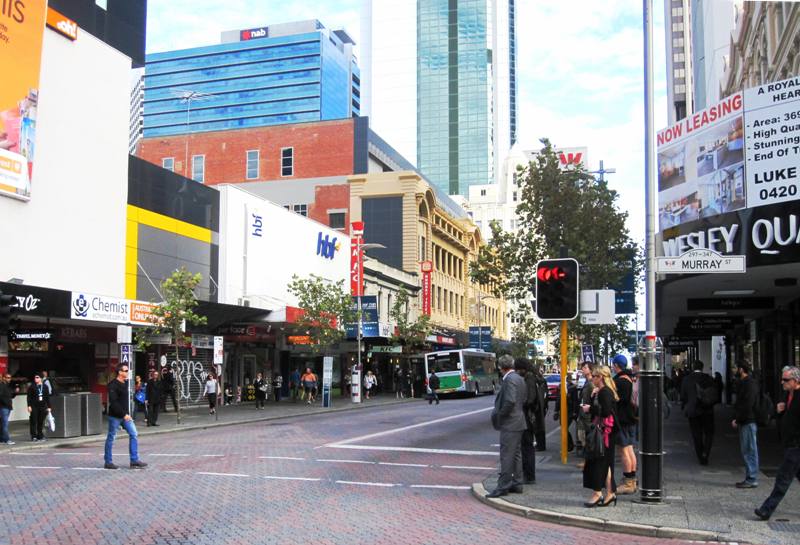 Following the Swan River back to Fremantle

We followed Swan River much of the way for our return trip to Fremantle, and we were just as impressed with those trails as we were with the ones along Sunset Coast. We thought there would be a trail pretty much all the way along Swan River as the map shows several parks dotted along the shores, so we didn’t take the bridge along Highway 2 back as originally planned, but rather, followed the river along the north side. Eventually our bike path ran out and we ended up weaving between roads and side walks through several villages and a few housing developments until we found a road to link us back up to the Sunset Coast route. A very rough map of our route is below: 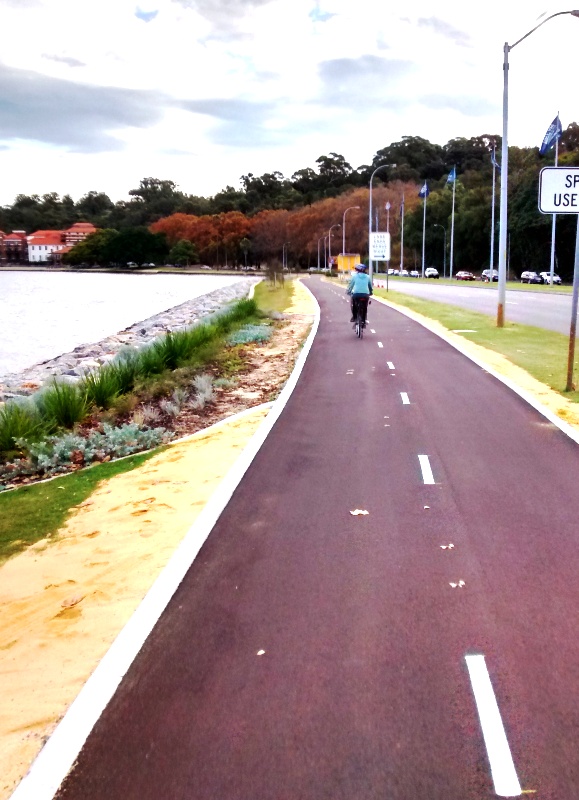 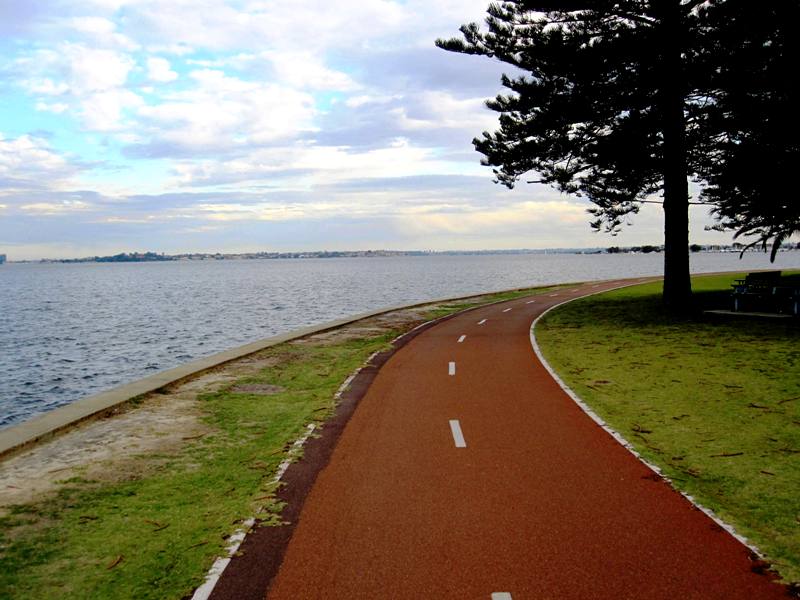 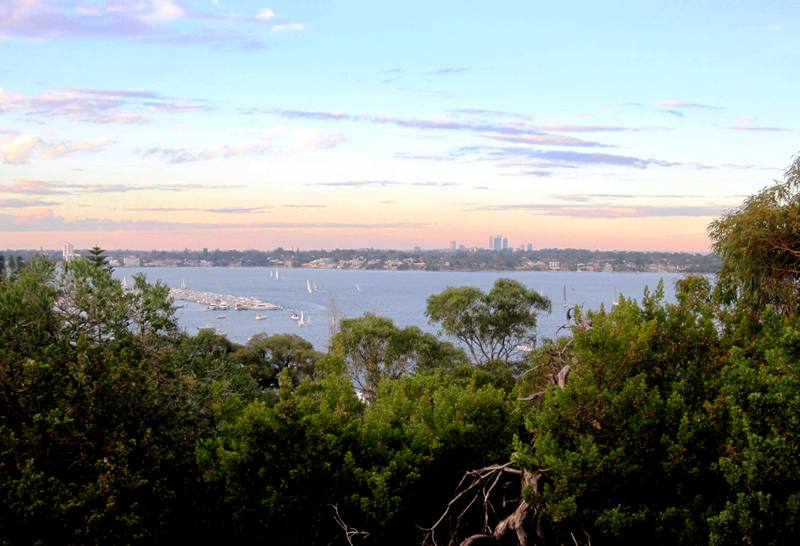 Ultimately, the return route takes you back to the sea, where you follow a stretch of the Sunset Coast into Fremantle. And you know what? We soon discovered the route is aptly named!

The next day, we did our road trip to Lancelin Sand Dunes and Pinnacles Desert and the morning after that, we made our way to the Perth airport, which is only about 45 minutes or so by car from Fremantle city center. 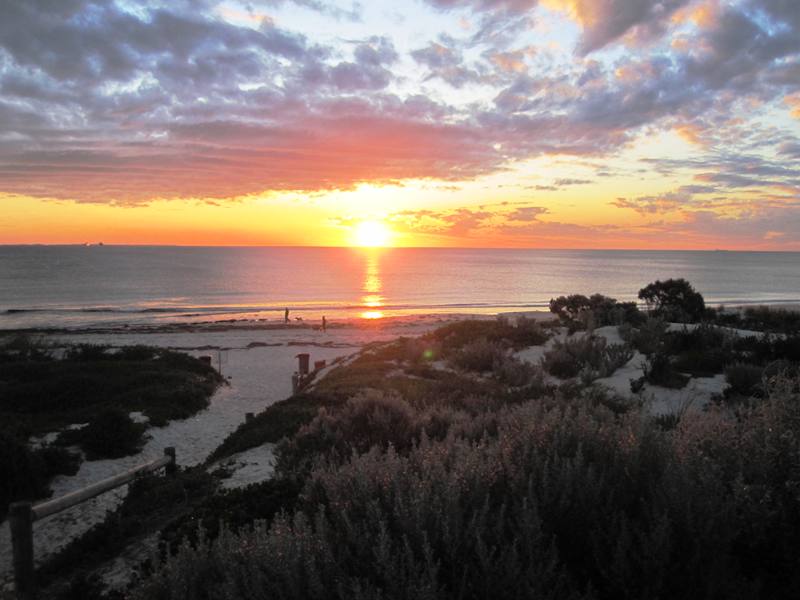 So that’s a wrap of our Seven day road trip through Western Australia with a cycling trip from Fremantle to Perth and back. The cycling in Fremantle and Perth is lots of fun, and the coast-routes are quite flat for those who are worried about the skill level of such a journey. Even if you can only get out for a few hours, do it! Just follow the paths along the coastline … you’ll be glad you did!