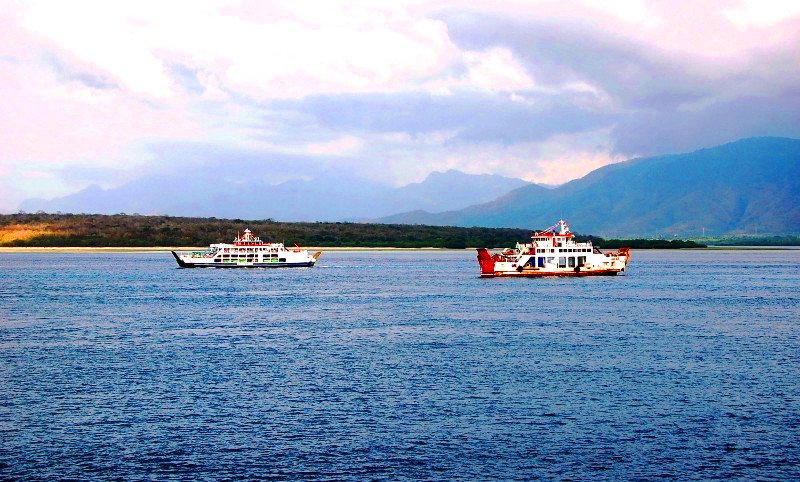 We recently took the Java to Bali ferry from Banyuwangi, Java to Gilianuk, Bali, and though the trip was more or less an accident, we are so glad that we chanced upon the experience!

Most people arrive in Bali via the Denpasar airport: Bali Ngurah Rai International Airport. Perhaps because of this, the most developed areas of Bali include the adjoining surfing town of Kuta (followed by the beach and shopping areas of Legion and Seminyak further north), Jimbaran and Nusa Dua to the south, the capital city of Denpasar itself and then of course the artsy-cultural town of Ubud, about an hour and a half to the north east. Almost everyone I talk to about visiting Bali can wax poetic about the yoga and cooking classes in Ubud, the shopping and dining in Seminyak, the beaches of Legion, the spas and tranquility of Nusa Dua or the seafood at Jimbaran. As the below map demonstrates, all these places (indicated by red pointers) are within close proximity to the airport, with Ubud being the furthest-flung destination.

But I didn’t realize just how little anyone visits the rest of Bali until we moved to Indonesia. Even though the towns and areas mentioned above roughly encompass a mere one-fourth of the island!

Thanks to a flight gone very, very wrong over Indonesia’s Independence Day weekend in August, we found ourselves with a significantly changed itinerary … and an opportunity to try out the Java to Bali ferry from Banyuwangi, Java. I’ll skip the horror of our bed-bug-hotel layover in Surabaya, the hours of hair-wrenching frustration and other aspects involving questionable professional ethics. Suffice it to say, instead of departing from Balikpapan Friday early evening and arriving in Bali at 22:30 that same night, our “new and improved” itinerary had us enjoying the aforementioned night layover in Surabaya, with a connecting flight to a town on the east coast of Java called Banyuwangi at around 11:45 in the morning the next day. From Banyuwangi, we would enjoy a few more hours of quality airport time before another flight whisked us to our final destination in Bali, arriving a little before 18:00 on Saturday evening.

On a holiday weekend with completely booked-out flights, this was the best offer we could get. The silver lining to our extended tour of Indonesia airports and seedy hotels was that we had plenty of time to consult our guide book before arriving in Banyuwangi. And what we discovered was that, less than an hour north of this tiny town we’d never before heard of, the Java to Bali ferry terminal provides passenger and vehicle transport to the Island of the Gods every hour of every day of the week!

Armed with this new-found information, as soon as we landed in Banyuwangi, we grabbed our bags and hightailed it out of the airport, which is so small you’d hardly believe it is a functioning airport at all. (In fact, I took some photos to share with you, but alas, I lost that camera later on in our Bali adventure.) Outside, there are dozens of taxis waiting, so we hailed one and asked the driver to take us to “Pelabuhan Ketapang” which translates to Ketapang port. You could also say “Ferry Ketapang” and that should work as well. 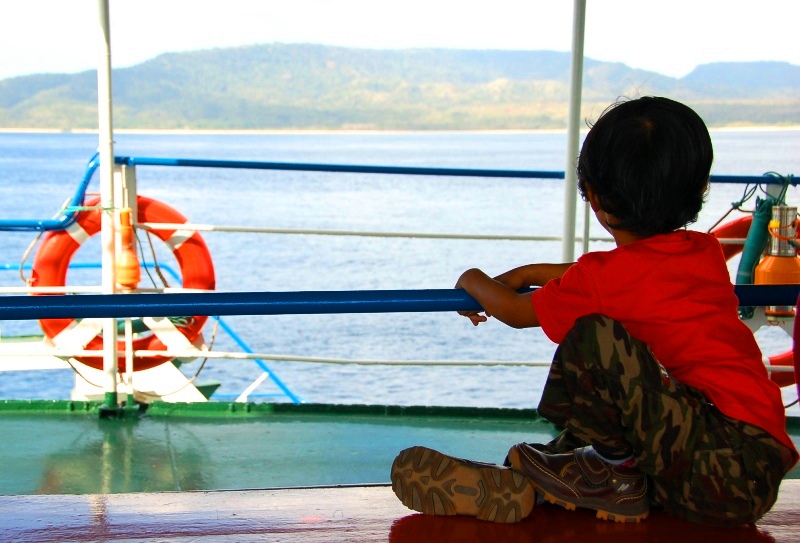 Even though the Banyuwangi Ferry is actually not in Banyuwangi — it’s in Ketapang as you may have deduced — it is considered part of Banyuwangi. And because the good people of Banywangi like to keep a traveler on her toes, it should also be noted that the Banyuwangi airport is also not actually in Banyuwangi, either, but rather in an even tinier town to the south called Blingbing.

So, when I was researching our ferry prospects, I was confused to find our boarding passes indicating our arrival in Banyuwangi, but when consulting google maps, the only airport nearby was in fact Blingbingsari airport! Confused? Here’s the short and sweet: 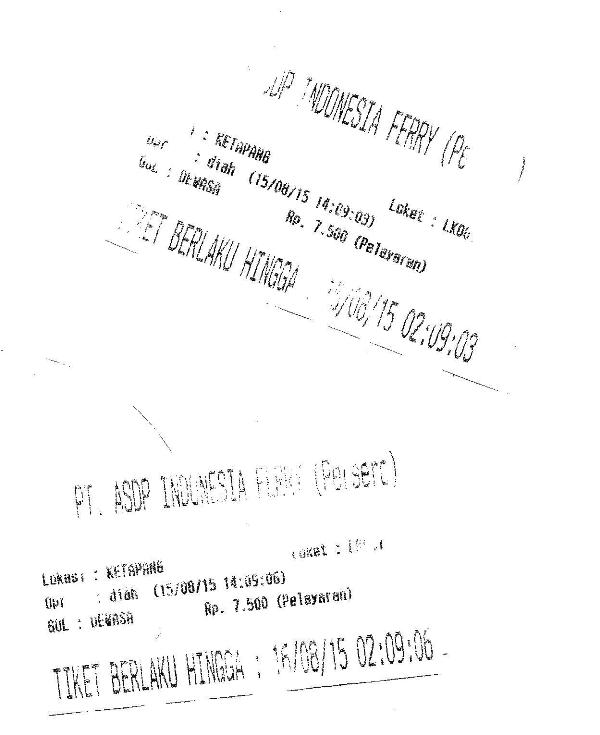 With that cleared up, we discovered the Java to Bali ferry is only a 35-minute drive from the airport … if your driver is a frisky one like ours. If you’d rather not feel the jostle of brakes and constant horn-screeching, however, it probably takes a normal driver closer to 45 minutes or so in regular traffic. Taxis use the meter here (or they are supposed to). Our metered fare cost us 147,000 Rupiah — roughly 10.50 USD.

If you are traveling by bus or train to Banyuwangi, then those stations are considerably closer to the ferry terminal. The train station (brown indicator in the map above) is nearly adjacent while the bus stations (yellow indicators) lie a bit further south in Banyuwangi proper.

The ferry terminal is quite prominent from the main road, and the ticket counter within is intuitive to reach. Just walk through the entrance from the main road and follow the strange sidewalk through the ferry terminal building until you see a booth to your right, just before the passenger turnstile. Here, indicate your destination, which if you are headed to Bali should be “Gilimanuk, Bali.”

Then brace yourself for the whopping Java to Bali ferry ticket price:

Just present your ticket to the employee at the turnstile, go through and then climb on board the ferry! Since these things are leaving every hour, there is pretty much a ferry ready to board anytime you arrive, so it makes things simple enough. Once on board, you can climb the steps leading to the second and third floors of the boat. The second floor is covered, has rows of benches, restrooms and a few kiosks selling food and drinks. But it’s the top floor you want. 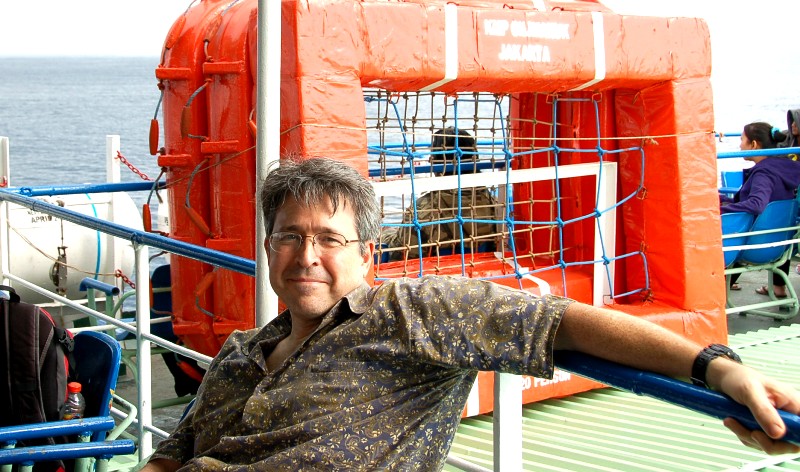 Because this is where the action is. No walls to keep in the cigarette smoke, just fresh wind and 360-degree views. There are chairs grouped in several areas and a few spots offer shade so you don’t roast yourself during the hour-plus journey. And we didn’t even realize it at the time, but our seats ensured prime viewing of what we soon learned was an entertainment tradition in these parts: 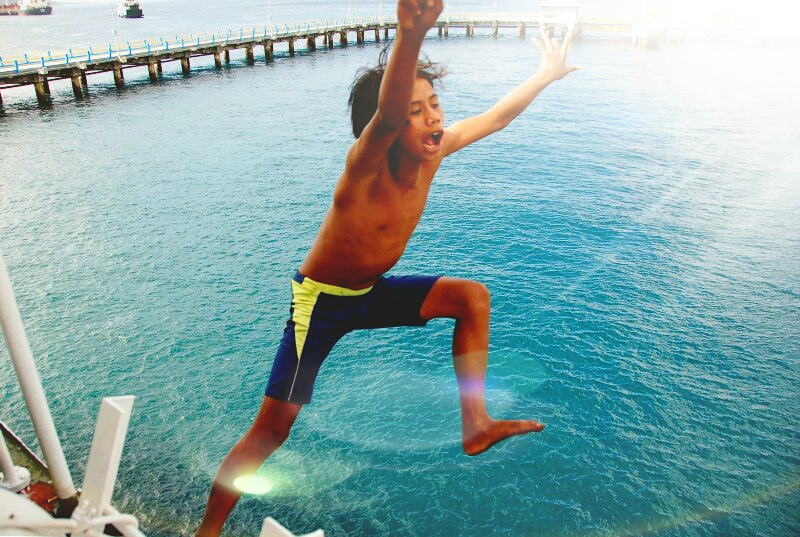 Here’s how it works: shortly before the ferry departs, several local kids will board the ferry and climb to the top deck. Everyone must know the jig, because within a matter of seconds, ferry patrons start tossing coins into the water. The kids shout and dive from the ferry to catch the coins, then swim about, shouting up at everyone to throw more money. It shocked us at first — we didn’t understand what was going on! 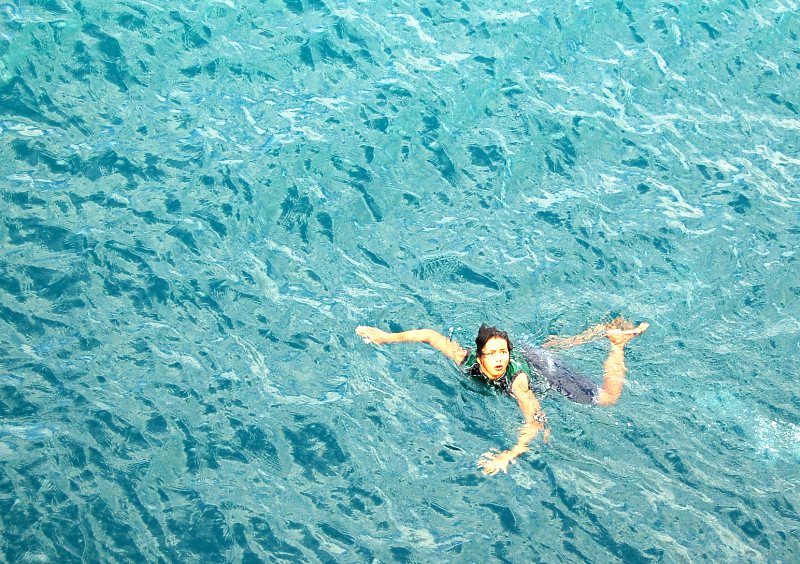 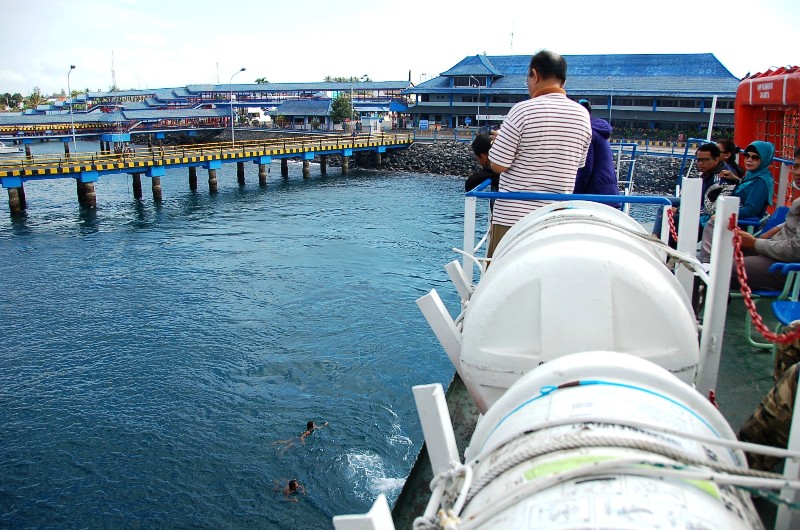 The show stops when the ferry departs. And then, even though the trip technically takes an hour, it … doesn’t.

Java and Bali are surprisingly close; you can see both shores at any point in the journey, but the reason why it takes longer than geographically necessary is because the Gilimanuk ferry terminal only has four ports. So, if the ports are still full when your ferry approaches, you end up hanging out in the straits between the two islands until a spot is cleared! As we waited, we saw a few other ferries doing the same. The picture below shows the popular “hanging out” area! 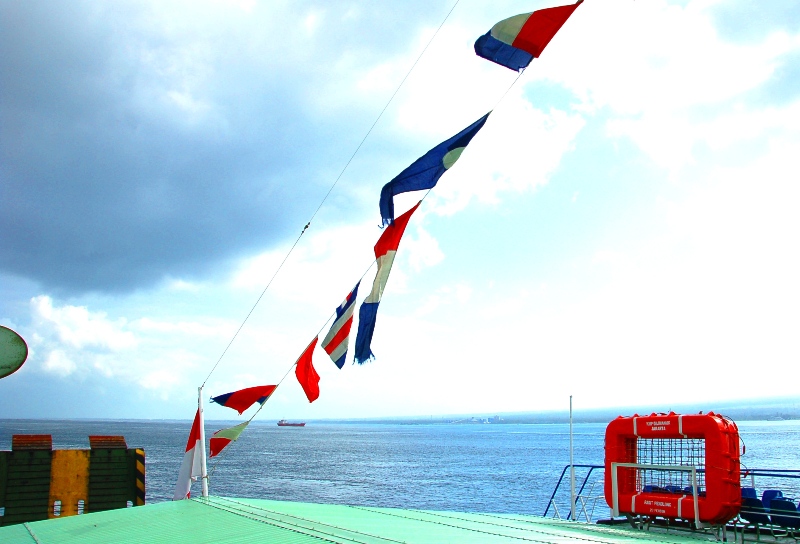 On the bright side, the scenery was gorgeous, the wind refreshing, but mostly, we were just happy to be outside instead of waiting  another few hours at the Banyuwangi airport for our connecting flight.

All in all, I’d guess the Java to Bali ferry voyage took about an hour and a half. Still, not bad! Especially considering the fact that we arrived in Gilimanuk, Bali, nearly two hours before our connecting flight was scheduled to arrive in Denpasar! Plus, we had a way better view. And all it cost us was about 11.50 USD for the taxi and ferry rides combined … and a little time posing for selfies with fellow passengers! 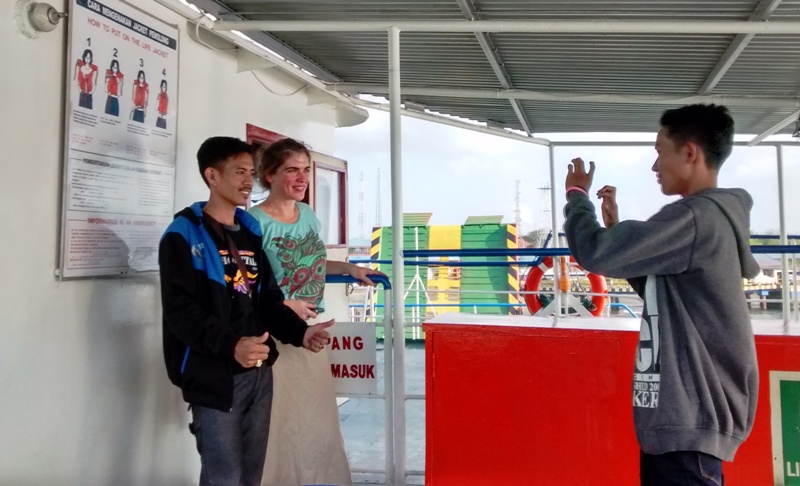 Once at the Gilimanuk ferry terminal, just follow the walk to the exit, which spits you out onto the main road. Hang a right and then take a left at the first juncture, where you will find the local bus and mini-bus (angkot) station. Normally, buses and angkots can take you to all parts of Bali for extremely cheap prices, but since it was the holiday weekend, most transport appeared off-duty. We finally bargained for an angkot driver to take us to the town of Pemuteran, which is 38 kilometers from the ferry terminal, for 150,00 Rupiah. Even though the cost is only a little over 10 USD, honestly, it should have cost us less than 20,000 Rupiah.

Even so, we ended up in Pemuteran, checked into a super-cute room and were walking on the beach surrounded by curtains of mountains in less time than our plane would have touched the runway of Denpasar airport!

Our experience on the Java to Bali ferry was the best thing that had happened to us since leaving Balikpapan, and even though it was more or less an accident, it definitely ended up being a happy one. Next up: the beautiful coastal area of Pemuteran, then on to the lush, mountain town of Munduk.

4 thoughts on “The Java to Bali Ferry: How to reach it and what to expect”