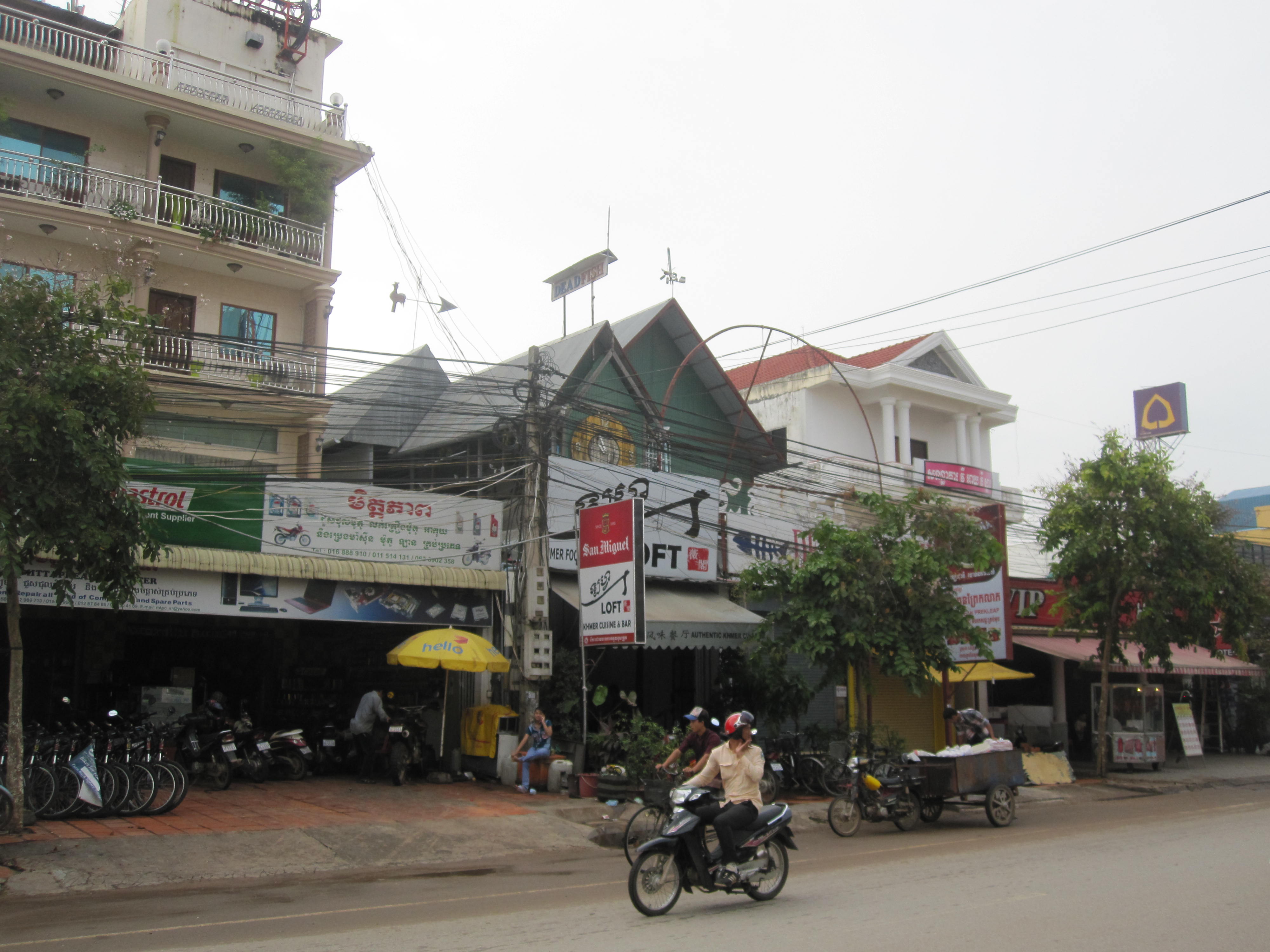 Siem Reap is a city in the Northwestern area of Cambodia, and is most well known for being the gateway to the famed Angkor Wat and the other magnificent temples comprising the Angkor Archaeological Park (more on that later).  The town itself has some highlights — it is very international in terms of cuisine — but it also has a lot I could have lived without.  Same as any place, I suppose.  There were shops and markets galore, all with repeat souvenirs, funky clothing, “silver” jewelry, crocodile leather goods and t-shirts that, judging from the labels at least, were GAP rejects.  Contrary to what one would think, I actually found better bargains at the temple sights themselves.

Vestiges of French colonization linger everywhere, but especially in the food: restaurants and food stalls sell everything from baguettes to escargot!

It was fun to walk around at night, people watching as tourists braved the “Dr. Fish Massage” and restaurant tables lined every square inch of space not already claimed by souvenir stalls.  Other highlights included walking through the Old Market (“Phsar Chas”), especially the central area where traditional food stalls sell fresh fish, vegetables and dried seafood, and riding around in the crazy Remork-motos.

NOT highlights included the constant barrage of “Yes, Miss, you buy this!”, the strange excursion to the Floating Village of Chong Kneas, and getting slapped on the butt by a ten-year-old for not giving him my money.  A first for me, at least — the butt slapping, that is.

The Floating Village just made me uncomfortable; it felt very exploitative to me, especially when the boat driver tried to take us to a “floating orphanage.”  I put my foot down on that one, but the whole experience felt kind of creepy, even though other people at the conference who went said they thought it was amazing.  I just didn’t feel like it was amazing to float through a poor village obviously set up for mass tourism.  Literally every boat had its own shop and restaurant waiting somewhere in the mangroves, where an obligatory disembarkation ensued, followed by a cage full of crocodiles piled on top of each other and some strange pit filled with catfish.  What?  No thank you.  For the price I paid to take the boat ride ($20 USD, I think), I wish I would have taken that money and purchased something at one of the plethora of NGO’s in Siem Reap geared toward actually helping people rather than exploiting them.

Okay, I’m done with that rant.

During our time in Siem Reap, we stayed at one of the big hotels/conference centers along Airport Road out of town, and although it was technically within walking distance to the Siem Reap River and Old Market area, I wouldn’t really recommend it.  If we were to return to Siem Reap on our own (as opposed to being here for a business conference) we would definitely have stayed in the Old Market area, where there are so many inexpensive, nice places to stay right in the heart of things.

Travel Tip: A strange fact I forgot to mention earlier: currency in Cambodia is in USD as well as Cambodian Riel, but most use US dollars and give change in Riel, which (at the time of this posting) is roughly 4000 Riel to $1 USD.