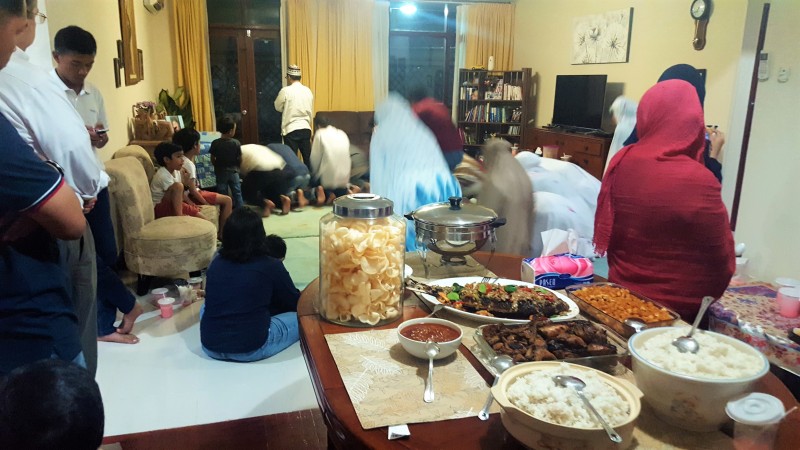 It is that time of year again: the Muslim holy month of Ramadan, where, among other things, observers abstain from eating or drinking during the day and participate in breaking the fast at sundown.

And if the curtain-obscured restaurants, department store sales, night bazaars and lack of daytime street food stalls didn’t clue us into this special time of year, then the signs lining the streets saying things like: “Be happy. Ramadan is here!” and the stores selling an amazing selection of dates (a/k/a “Palm Fruit”) certainly do. 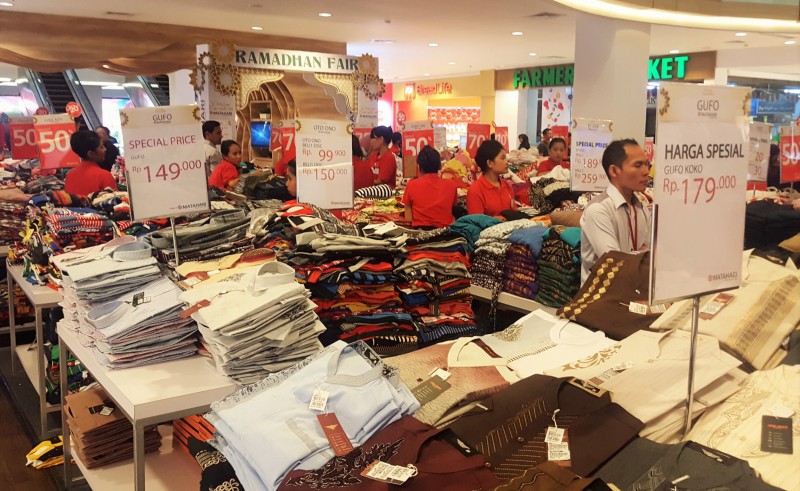 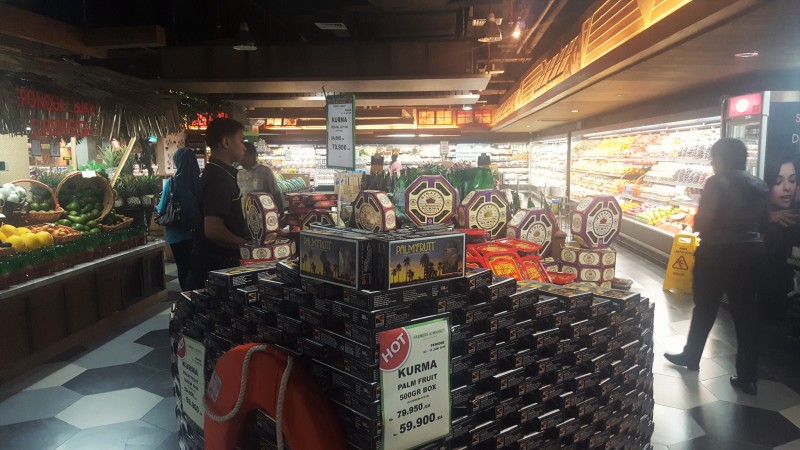 Or, even better, if you happen to be in your car at sunset, just roll down your window while at a stoplight, where you’ll be handed a breaking-the-fast snack box from a volunteer toting a big, Santa-like sack of them from an assortment of organizations and mosques!

During this holy time, we try to be sensitive to the fact that those around us can not eat or drink during the day, though we still bring water along for long walks … because we would dehydrate otherwise. And when we go on those walks after Sam’s work, it is amazing to be out as the sun sets and loud speakers burst into life, broadcasting prayers from hundreds of neighborhood mosques all around.

Last year, I wrote about our [extremely peripheral] observations of Ramadan in Balikpapan, but this year, we had the opportunity to share the experience of Iftar, or breaking of the fast, with some colleagues here on our camp.

For the uninitiated, I should explain that the practice of fasting (called “Puasa” in Bahasa Indonesia) during Ramadan applies, more or less, to all believers who have reached adolescence and who are not sick, pregnant, frail or on their period. This means that from sun up to sun down, no food or water is to touch your lips. Imagine not drinking water while working in tropical heat during the day! For an entire month!

How Iftar (Breaking the Fast) Begins

Every evening during Ramadan, families and friends gather together to share in the rite of breaking the fast, which begins just after sunset. Simple snacks such as dates, finger food (here in Indonesia, hot chilies accompany almost any kind of finger-food!), water and sweet drinks are normal staples. 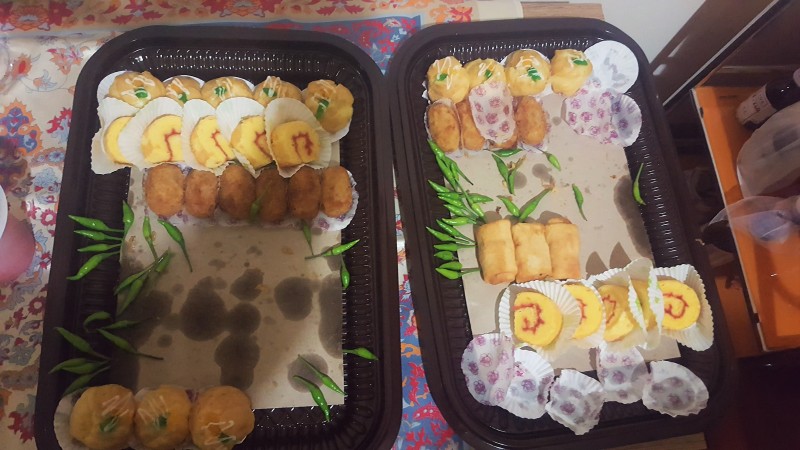 In our case, we drank coconut water mixed with shredded coconut, rose syrup and palm leaf gelatin. That combination may sound strange, but it is actually quite tasty. And the chewy gelatin squares add an interesting texture … try it first! 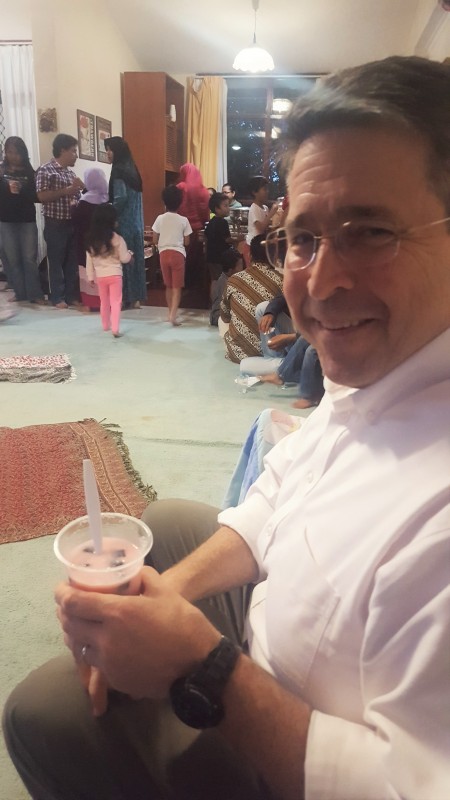 As the party partakes, men position rugs and scarves on the floor, so that the rugs point in the direction of Mecca. Sam and I observed all of this while sitting on a couch at the front of the room and sipping our coconut concoction. But after several minutes and a few awkward glances our way, we finally caught on that we needed to move as we were more or less blocking the angle to Mecca! 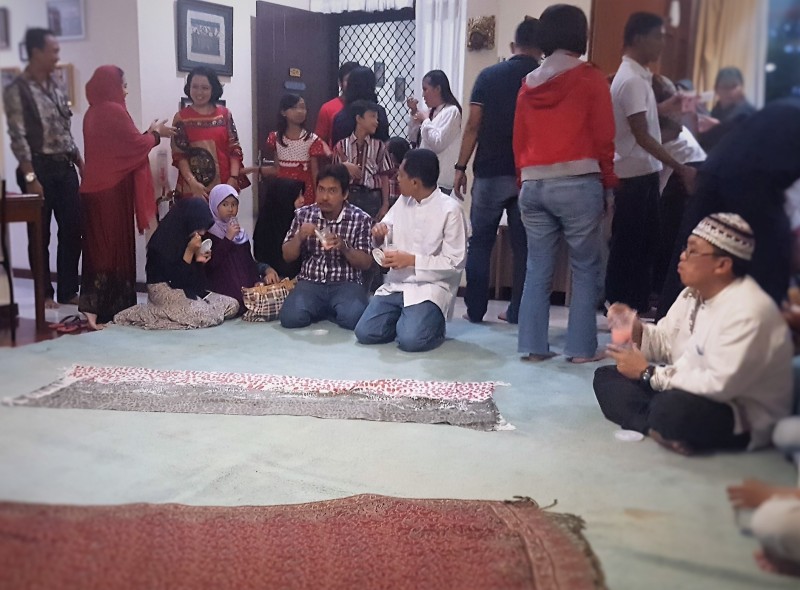 The Sundown Prayer during Ramadan

The sundown prayer starts with the men lining along the rugs to the front of the room, while the women line along the back. 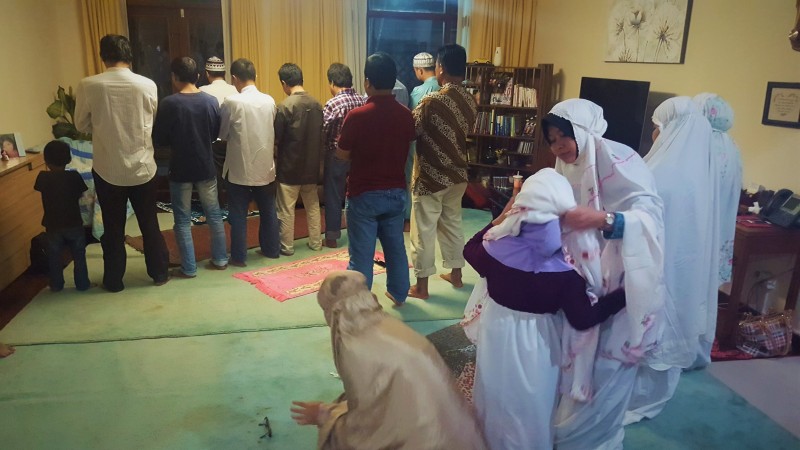 Women cover their entire bodies, with only their faces and hands showing.

It impressed me how all the women had their body-covers (jilbab) handy to slip on over their regular clothes. When I asked why most of the jilbabs were all white, our host explained that white is the color required when pilgriming to Mecca. For this reason, many Muslims have white attire for this purpose, though white is not required for ordinary prayers. Our host also explained that men are only required to cover themselves from the waist to the knees. 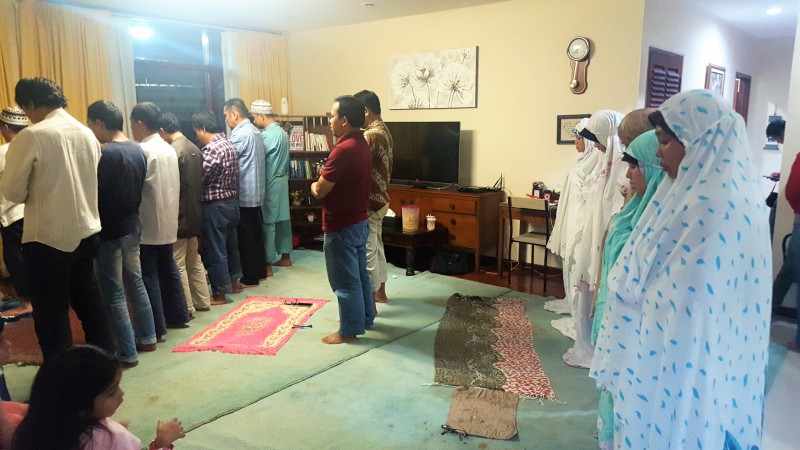 Once everyone is properly covered and lined up, a short prayer ensues. Typically this is led by the community religious leader, but if the group is a social gathering in a less formal setting, then a man from the group is chosen to lead in the sunset prayer.

During the prayer, guests of differing faiths or those not “qualified” to participate stay at the back of the room. Sam and I were of this population, and as this was the first time I’d ever participated in Iftar, I wasn’t sure what I was supposed to do. I felt nervous and fidgety — worried my presence might somehow be offensive to those observing such a solemn thing — but then, when I looked around, I realized it simply wasn’t a big a deal to be a non-participant. Nonbelievers, “disqualified” Muslims and children continued on with their conversations and snacking, albeit in more subdued, respectful tones.

Our host, who did not join in the prayer for health reasons, explained that even though she is excused from fasting due to her condition, she will still need to make up for it after Ramadan by fasting for those days she skipped. So no free passes!

She also invited me to take pictures during this time. I think I felt a little nervous doing so, even with the invitation, as I see my photos could have been better focused! 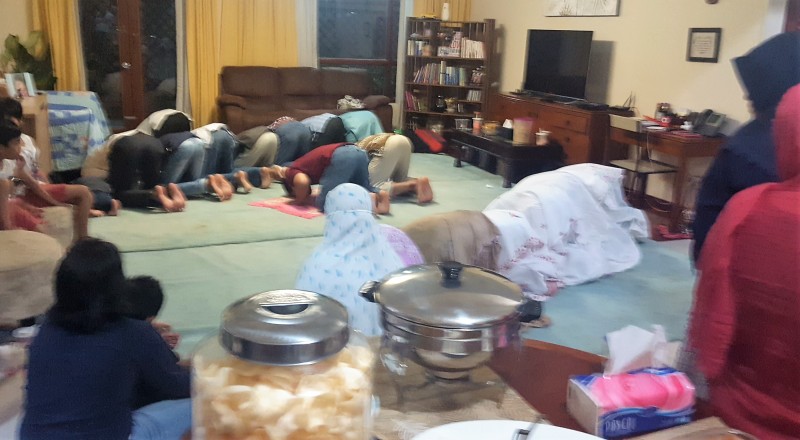 The prayer lasts five or so minutes, and immediately thereafter, the jilbabs are discarded and the feast begins.

Steamed rice, vegetable-and-tofu soup, garlic sauteed potatoes, grilled fish, barbecued chicken and the addictive crispy-fried invention that is krupuk (shrimp crackers) spill over our dishes as joking and laughter abound. And as I sit eating the most delicious snapper I believe I’ve ever had in my life (this stuff is amazing: marinated with lime leaves and lemon grass, garlic, chilies and scallions, then grilled), I realize that sharing in the breaking of the fast feels a lot like Thanksgiving. 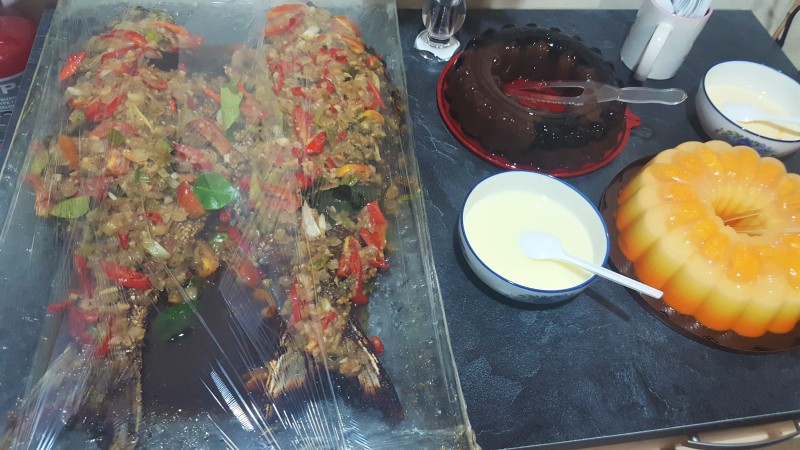 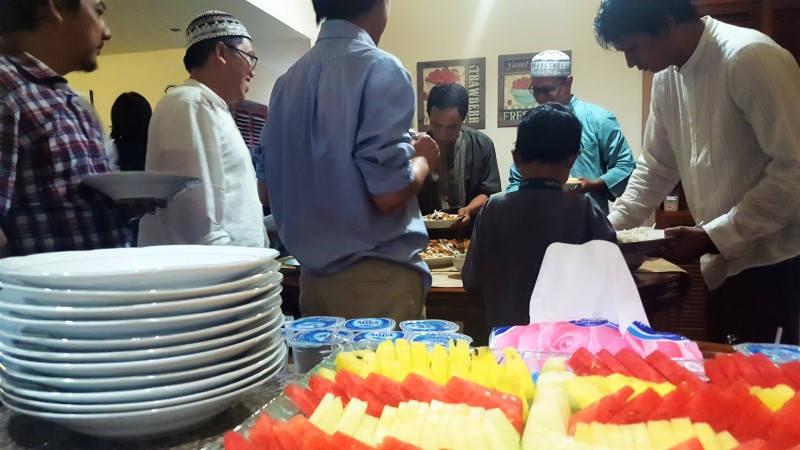 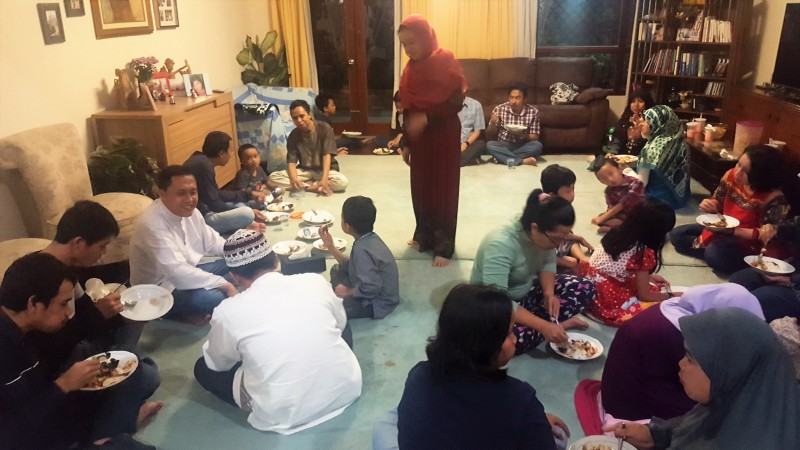 Just as we share that joyous experience — often with loved ones whom, though blood relations, are often as far away from our own life philosophy and outlook as a stranger’s — here, too, our present communal celebration outweighs any differences.  In this room, people of all job descriptions, backgrounds and religious labels celebrate an observation that is important to so many. Muslims and Christians, Hindus and Buddhists, Agnostics and whom-ever-else can come together to share in breaking the fast … even though around half of us hadn’t fasted!

It was an honor to be a part of it, and I think Sam and I are both grateful to have gained such a unique experience. 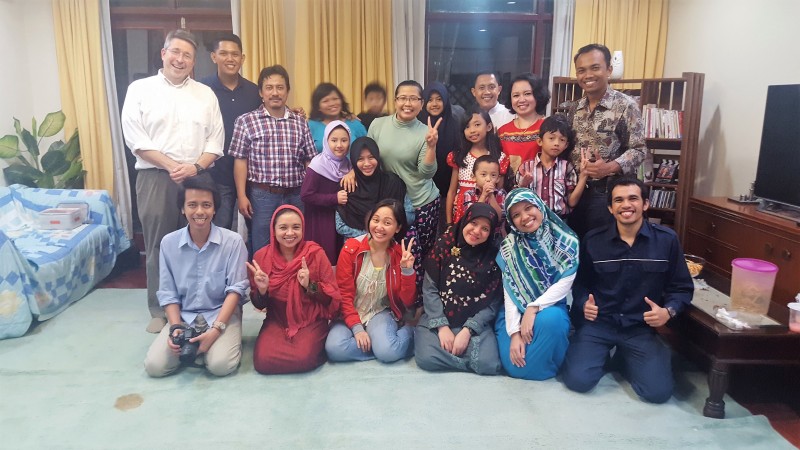