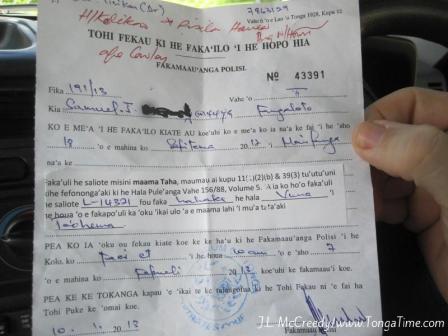 We interrupt our regularly scheduled post to bring news of one recently paroled Samuel J. (henceforth, “Defendant” and incorporated by reference herein) who, five months prior, on a dark, stormy night in mid September, committed the criminal offense of driving home along Vuna Road with only one headlight.

An unpardonable act, to be sure, but the Kingdom of T protects its denizens from this sort of thing with a police force trained to apprehend such offenders.  And so, if Defendant’s testimony is to be believed, he was pulled over by one such officer on that fateful eve, who, after informing Defendant of the non-functioning headlight, promptly presented a clipboard wielding a citation written in Faka-Tonga, and directed Defendant to “sign here.”

Defendant did so, not knowing exactly what he was signing off on, but surmising he had acknowledged through the act of subscription the offense of unwittingly driving with one blown-out headlight.  Autograph in hand, the good policeman nodded curtly and marched back to his vehicle without presenting Defendant with a copy of said citation.  Defendant returned home, informed his wife of the incident, and the next day, visited an auto parts store during his lunch break to purchase a new bulb.

Five months passed in peace and tranquility.  All was well with the world.

And then, nearly two weeks ago in late January, Defendant’s cell phone rang.  It was the police, asking for directions to his home.  Defendant provided them, painstakingly describing the right turn by Mormon church and the left turn down the dirt road by the chestnut tree.  “If you see a sign stating ‘Fangaloto, Block 8’ that stands to left of the haunted graveyard,” explained he, “you have gone too far.”

The policeman thanked him and hung up the phone.  Defendant wondered out loud to his wife whether his directions were sufficient, or if, perhaps, he should have included the detail of the Tonga Dairy selling fresh eggs and brooms just before his driveway.  Wife regarded Defendant in silent amazement.

And then, on the Sixth of February, in the Year of Our Lord Two Thousand and Thirteen, Defendant’s cell phone rang again.

“The Police!” said the voice.

Defendant looked out the window to observe a police car sitting outside of the closed gate.  He quickly ran down the stairs and opened the gate, whereupon an exceedingly polite police officer handed him a citation written in Faka-Tonga.

“Show up at court tomorrow at ten,” said the policeman.

“Where … where’s the court?” grappled the Defendant.

“Behind [the grocery store] Molisi,” replied the police.  “Just show up and when they call your number, plead guilty to pay a fine.  If you plead not-guilty, you will need to get a lawyer.”

Ominous instructions, certainly, which brought the wife from the front door to the driveway in record time.

“Plead guilty … to a broken headlight?” she clarified upon joining them.

“Yes,” nodded the policeman, and after a few more pleasant formalities, returned to his vehicle and left Defendant’s home.

It was a long, sleepless night.  The telephone continually rang from a drunken office worker somewhere in the world who had obtained Defendant’s number and firmly believed it to be that of a fax machine in need of receiving communication.  A white owl fluttered past the window at midnight.  And at four, the reliable gongs of church bells crushed any hope of slumber.  By six, Defendant rose from the bed, red-eyed and frayed-nerved, and prepared for his day in court. 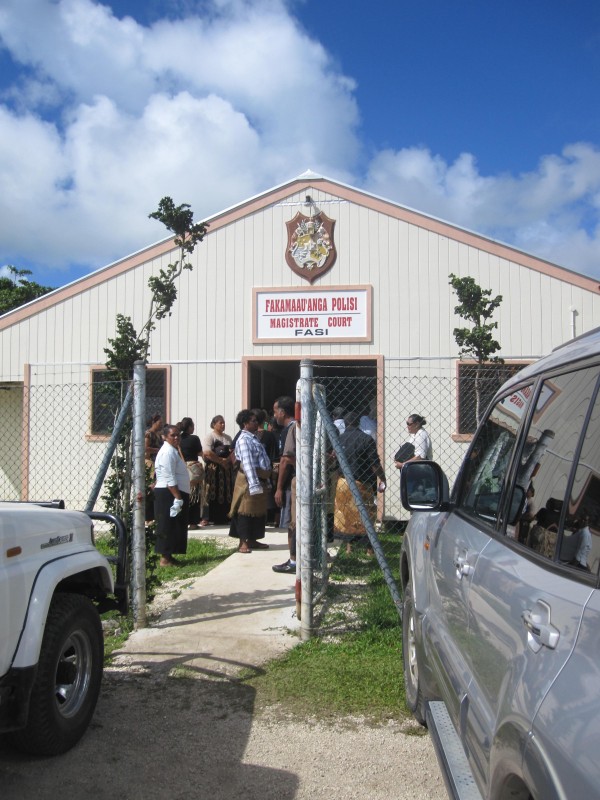 A little before ten, Defendant and Wife parked their car under the shade of a mango tree by the court building that looked kindof like one of those churches from Little House on the Prairie.  Defendant wore slacks, an oxford shirt and a tie.  Wife wore a long, black skirt and a blue, button-down blouse.  They joined the line of fellow convictees as they shuffled into the stand-alone court building, now handing their Faka-Tonga citation to the bailiff who collected them by the door.

The building was crowded, the far left side filled with backless benches for the criminal congregation, and to the far right, the judge’s platform and desk reigned supreme.  In the center of the room, a table and several chairs took up space and appeared to host a few distinguished barristers.  Just behind this, a red pulpit hovered in the shadows, waiting, we soon discovered, for the countless defendants who would stand there upon summons and plead their fate to His Honor.  To the front of the room, before the table filled with lawyers, another pulpit and desk stood just to the left of the entrance.  This was where the bailiff stood and called off the names of defendants, one by one.

By ten, the court had begun.  Defendant and Wife squeezed into the crowded room and stood in the corner, trying to appear inconspicuous   Almost immediately, a young man jumped up from a bench and offered his seat.  The wife demurred, but the young man insisted until she gave her thanks and sat down.  Shortly after, another man whom she’d joined at the bench sprang up and offered his seat to Defendant.  Not wanting to appear ungrateful, Defendant accepted and took his place beside Wife, both noting the immediate feeling of camaraderie amongst their fellow criminals.  An older man to the other side of Wife looked over and sheepishly chuckled.

“This is what happens when … break the law,” he noted. 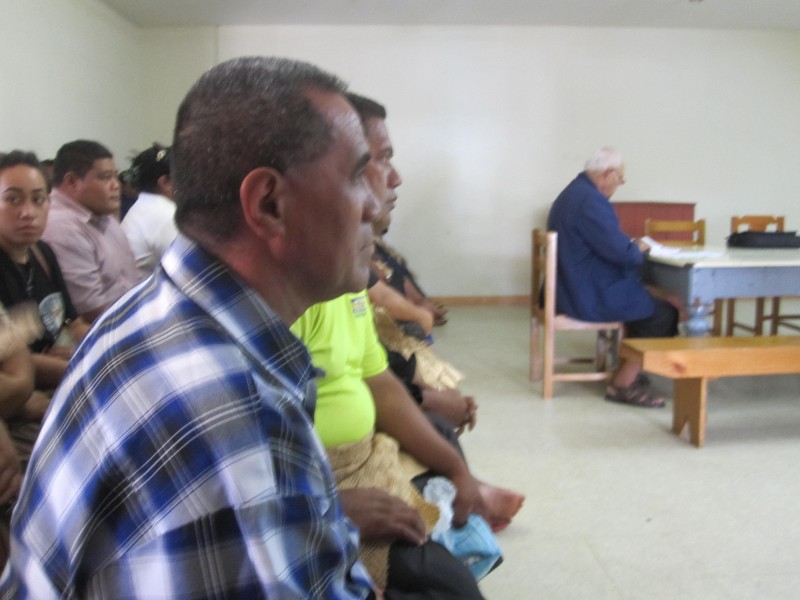 One by one, names were called, men and women rose from the guilty throngs to the left side of the room and made their way to the red pulpit where their sentence was read out loud by the judge in Faka-Tonga.  After this pronouncement, a one or two-word response was normally given by the defendant in question, presumably an utterance of “Guilty” or “Not Guilty.”  The defendants would then either return to their bench or shuffle toward the exit.  The bailiff would either crumple up the citation and throw it on the floor, or at times, return it to the guilty/not-guilty party.  Defendant and Wife watched all of this in silence, earnestly wishing they’d been better pupils at decoding Faka-Tonga during their stay in the kingdom.

A woman by the name of Lavinia was then called.  Lavinia arose — Wife remembered her as one of the women who had smiled kindly at her when she’d first taken her seat at the bench.  Like most of the convicts present, Lavinia was dressed in black but for her tan-colored kia-kia (a type of traditional belt/skirt woven from natural fibers and worn over a woman’s skirt or dress as a way of dressing things up a bit).  Wife watched as Lavinia passed her on the way to the pulpit, noticing Lavinia’s high-heeled Mary Janes — unusual footwear in these isles as most everyone simply wears sandals or flip-flops.   The lady’s got flair, Wife thought in admiration, watching as Lavinia’s long, black skirt and black shirt now made their way to their mistress’s doom.  As Lavinia’s posterior turned to Wife, she then noticed the low-cut V of her shirt back, detailed in transparent black lace.  A bright pink bra popped through lace, providing a welcomed flash of color.  Lavinia now stopped, hands on the pulpit, and bravely faced her accuser. 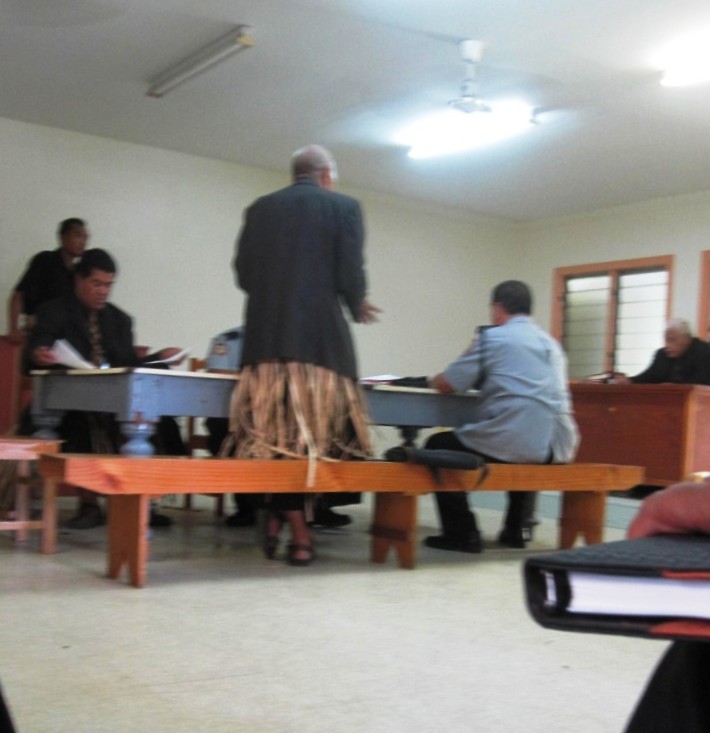 The judge read off whatever offense she had committed, just as he’d done before.  But now, instead of answering in one or two words, Lavinia surprised everyone with a well-intoned monologue that lasted for several minutes.  Even though Wife and Defendant could not understand what was said, the speech was undeniably a compelling one, with random English words such as “confused” thrown in, and by the time she paused for His Honor’s reply, the only two palangis present that day were definitely rooting for her.  But the judge did not share their empathy.

A calm, dignified response from His Honor ensued as Lavinia stood there, hands on each side of the pulpit, and this woman had spirit because even now, she interjected responses to whatever it was being said.  The judge took no notice and continued in all decorum until Wife and Defendant noticed he suddenly paused mid-soliloquy and slowly repeated the word “Confused” with an ironic tone that can only be parsed by a true professional.  The courtroom erupted in titters as the judge continued, then throwing in another word Wife and Defendant understood:

A few nervous glances were thrown our way, which did nothing to ease Defendant’s anxiety.  But whatever was said, it more or less concluded the judge’s sentence and Lavinia left the pulpit, saucily taking her place back on the bench.

A few more names were called until the name “Samuel” was announced.

Defendant rose at once and made his way to the pulpit.  The judge regarded him for a moment or two, before proceeding to inquire in English whether Defendant had been informed of his crime.

“Not … exactly,” began the Defendant, unsure of how to respond, and a little bit of sweat gathered at his temples.  “Or rather, I take it I’m here because I had a broken headlight?” he finished nervously.

“That is correct,” declared the judge.  “And how do you plead?”

An awkward silence ensued as Defendant considered his options.  The crowd at the benches waited, breathless.

“Very well,” announced the judge.  “You will pay thirty dollars.”

Defendant, in his eagerness to get the proceeding over with, and unsure if he had heard the judge’s ruling correctly (because, even though His Honor’s English was undeniably better than Defendant’s Tongan, the accent remained a thick one) leaned forward to better hear and asked, “I’m sorry?”

The judge creased his brows.

“Thirty dollars,” he repeated in a very low, very slow voice, “Or go to prison for one week.”

“Very well,” harrumphed the judge, and waved his dismissal. 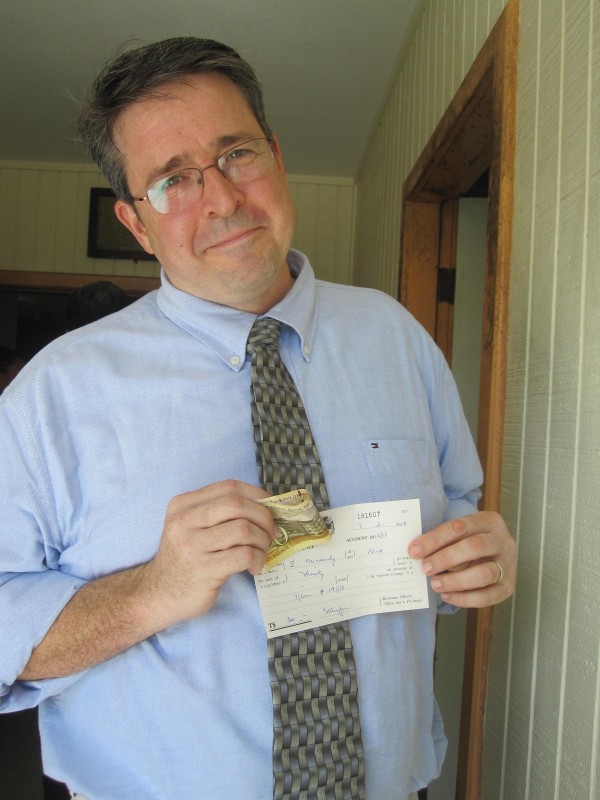 Defendant made his way from the pulpit, perhaps a little unsteady but a free man all the same.  He inadvertently cut in line to pay his fine, not knowing that the cue of twenty people outside were all waiting for their turn to pay also, but his new posse of fellow-convicts good naturedly allowed this blunder.  The bailiff even made a trip to the “Tea Room” outside and procured a chair for Defendant to sit in while he waited for the man who was currently paying his fine to finish.  He must have thought Defendant looked a little shaky.

Before long, thirty Pa’anga was paid out, a receipt given and Defendant and Wife made their way to their car under the mango tree, passing smiles and waves from their new band of rogue friends.  Defendant even paused for a photograph evidencing his parole. 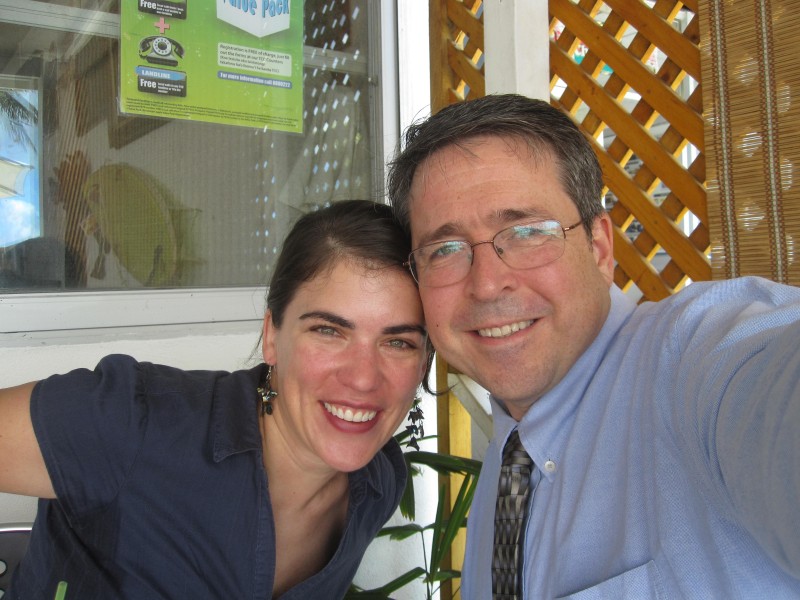 And this is how justice prevails in the kingdom by the sea.  To some, “freedom” may  be just another word for nothing left to lose, but here, it’s a fiscal bargain.  Where else would thirty bucks provide an opportunity to befriend illicit comrades while being entertained by a snappy lass in Mary Janes and a hot pink bra?

Thank you, Lavinia, for an awesome day in court.

2 thoughts on “Breakin’ the Law, Tonga-Style”