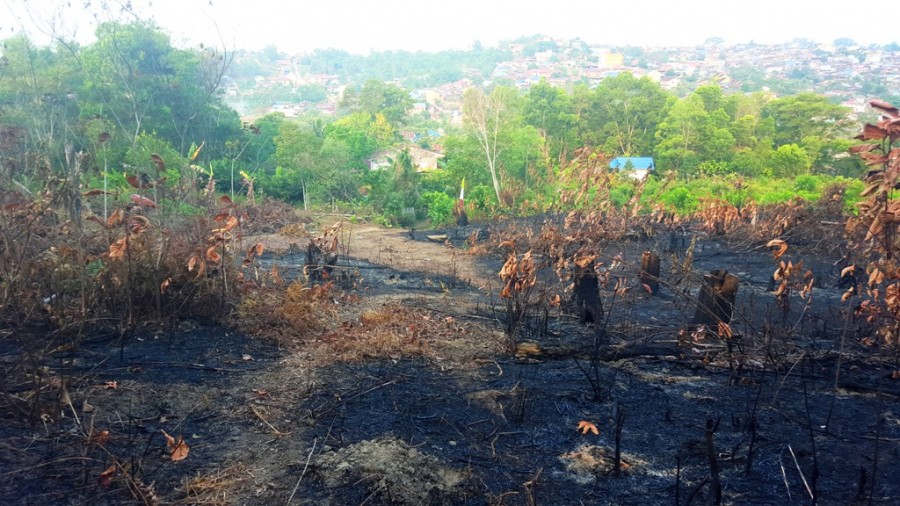 Indonesia air pollution is a major topic this year, especially for those of us living under the smoky clouds. Unlike countries such as China or the USA, where air pollution is caused largely from coal factories and automobile exhaust, here in Indonesia, the major air pollution culprit is slash and burn farming.

Slash and burn farming remains widely practiced in Indonesia, especially in the forested or agricultural areas of Sumatra and Kalimantan (a/k/a Borneo). In addition to agricultural pursuits, land development is booming — much like China, where acres of land are cleared for housing and commercial developments, many of which remain vacant after construction is completed. In China, these developments are often called Ghost Towns; aptly named as swanky high rises, shopping malls, parks and four-lane highways lie empty for years after construction, slowly declining from disuse.

In Balikpapan, Kalimantan, housing complexes and mixed-use developments aren’t nearly to China’s scale, but downtown, half-built, abandoned shopping malls compete with sparkling new ones only a quarter filled. And as one drives from downtown to the outskirts of Balikpapan, housing complex after housing complex dot the carved-out earth with raw, muddy landscapes and rows of town homes no one buys. (If for no other reason, than because no one can afford them — a small town home in one area where I inquired sells for around 200,000 USD! Here, where minimum wage stands at about 8 USD a day.)

I have been informed by several Balikpapan locals that, even ten years ago, most of Balikpapan beyond the airport area was heavily forested. Now, the natural landscape on the outskirts of town looks largely like this: 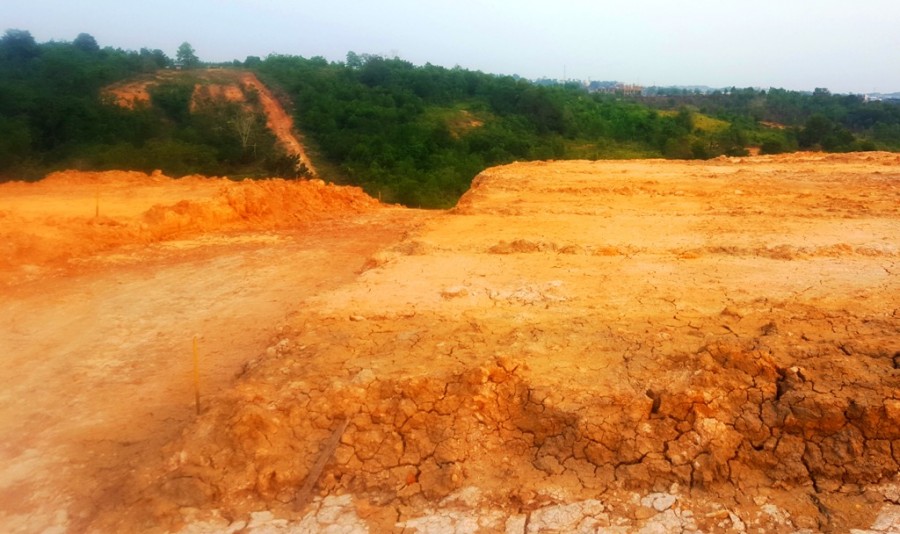 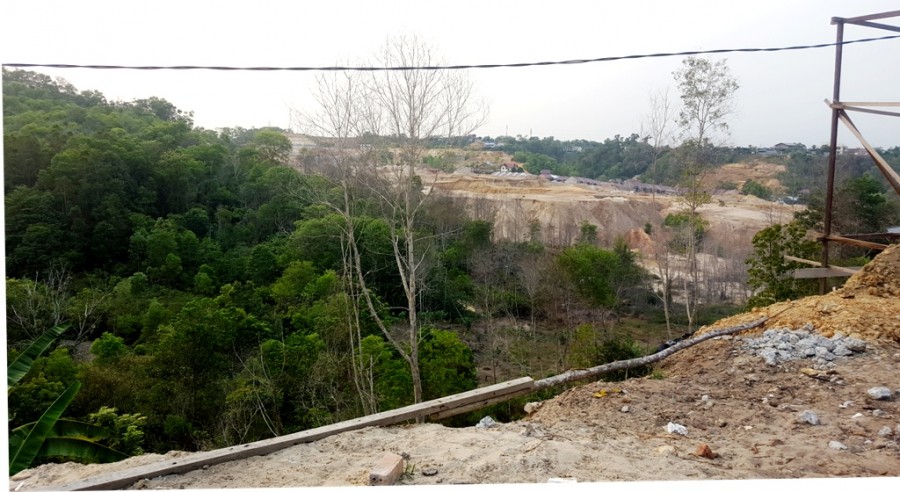 That is another debate on environment and economics altogether, but for purposes of Indonesia’s air pollution problem, land clearing isn’t just about empty town homes and ghost multi-use developments. Here, another problem is the agricultural industries that require clearing pristine forest to make way for plantations. For some, it is a matter of clearing one’s humble hectare of land in the most efficient and economical way so that their family can plant a crop of dragon fruit. For others, it’s an opportunity of a lifetime to sell inherited land to an eager developer of palm oil plantations … or yet another housing complex. And who could blame them? The problem is that, no matter who is doing the developing or farming, the land needs to be cleared of those pesky trees first.

How slash and burn farming has affected Indonesia air pollution

The results of slash and burn farming have … clouded the air, so to speak. It’s become so bad this year that airports have shut down and schools have closed. For example, a much-anticipated flight to Derawan (a small island a bit north of Balikpapan, off East Kalimantan) that Sam and I had planned for a weekend trip was cancelled because of this smoke. The airport didn’t even bother to open.

That same day, I saw flights to Jakarta and Surabaya cancelled as well. That was about three weeks ago.

Although we didn’t look up the PSI  (Pollutant Standards Index — basically the predecessor of Air Quality Index, which is used elsewhere)  that day, we’ve checked on it since. And while the smoke tends to clear off by mid-afternoon (or at least somewhat), every morning for a month now, we’ve woken up in a room that smells like ash. On Wednesday, the PSI at 9:00 am was at 500 — the maximum our camp meter goes to. To provide perspective, a PSI of 201-300 is considered Very Unhealthy and 301 or more is considered Hazardous. Since that day, the PSI has often registered at around 300.

I actually went on a bike ride that PSI-500 Wednesday morning, and though it was obvious that the air quality was terrible, a fellow cyclist made the comment, “Well, at least here, you know what you’re breathing.”

She then explained that while living in Mongolia, the air was so bad all winter long that one could hardly see a few inches in front of them, and that the air smelled of burning plastic and other chemicals. “Here, it’s organic matter, so it’s a bit of a comfort,” she concluded. 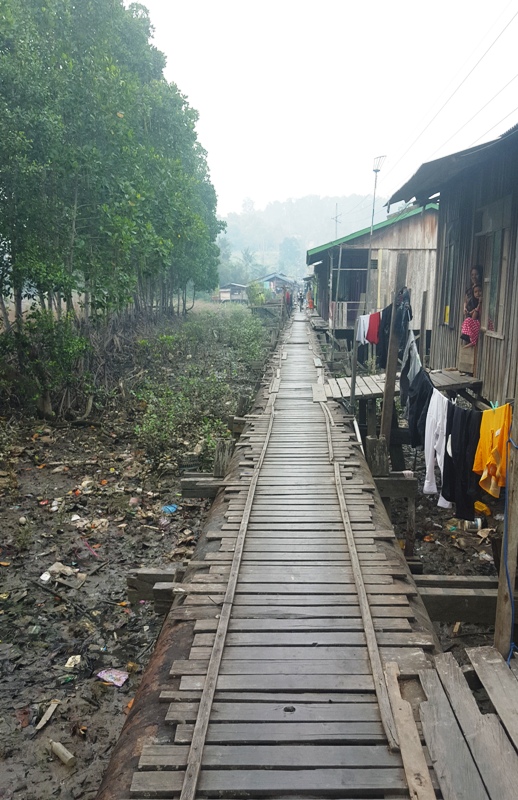 Sam and I lived in Tianjin, China for a year and experienced a less-severe version of toxic air as well, so I guess I’d have to agree with her. That said, the picture directly above shows a village we cycled through that Wednesday morning, with the smokey haze in the horizon. It is hard to represent the real-time experience as the picture insinuates perhaps a small fire in the distance. In reality, the air looks like this everywhere you turn; you can’t get out of it. To exacerbate the issue, it is now the dry season, so the smoke just hovers with no way to clear the air but a strong gust of wind, and even that only pushes the smoke inland for a while until it seeps back out to the coast.

Someone texted me the other day from the neighboring island of Sulawesi, asking what the government is doing about this problem. It’s been on the news a good bit lately — including a spotlight in Forbes –, and some crack-downs have occurred on the more visible offenders. But Indonesia is a developing country of over 17,000 tropical islands and a growing population of over 250 million. There are a lot of farms and plantations and forests going up in flames.

Yesterday afternoon, Sam and I took a bike ride through an area that, days before, was forested. I’d actually seen the wooded hill from a distance on Wednesday when we’d stop for a short rest. This is what we found: 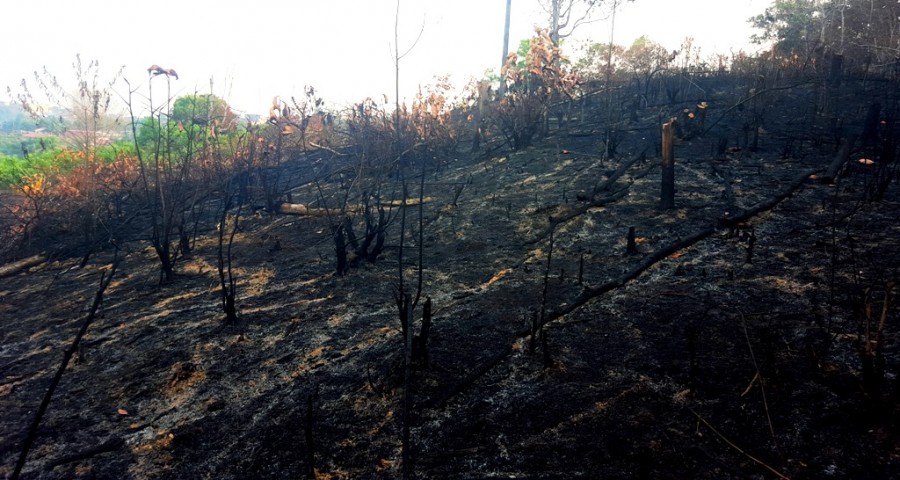 One thought on “Balikpapan Haze: The Indonesia Air Pollution Problem”