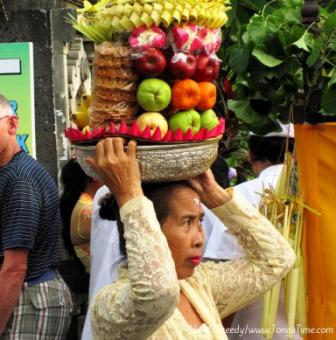 My previous post on the Jatiluwih rice fields and their interlinking water temples made me think of all the beautiful Bali temples and holy sites Sam and I have visited over the past few years — some before we ever came to live in Indonesia. Our list is still super sparse when compared to the huge range of temples here, but we’ve seen most of the Must See if You Are in Bali ones and a few more obscure holy sites in between.

I thought it would fun to collect them all in one place as a kind of compare and contrast … strictly from a secular, visitor’s perspective, mind you.

The only thing is, I’m not sure if it will be a fair comparison. Looking back, I think our favorite destinations are mostly those we rode bicycles to as a sort of do-it-yourself temple bike circuit, or just stumbled upon by chance. So was it the sites themselves or the experience getting there that made the impression? I’m not sure, so in an attempt to be equitable, I’ll make mention of how we approached each site, along with what struck as most or least favorable, starting with places a bit less on the tourist radar. In follow-up posts, I’ll cover Bali’s super-hyped sites as well as some that are, to us at least, downright marvelous. 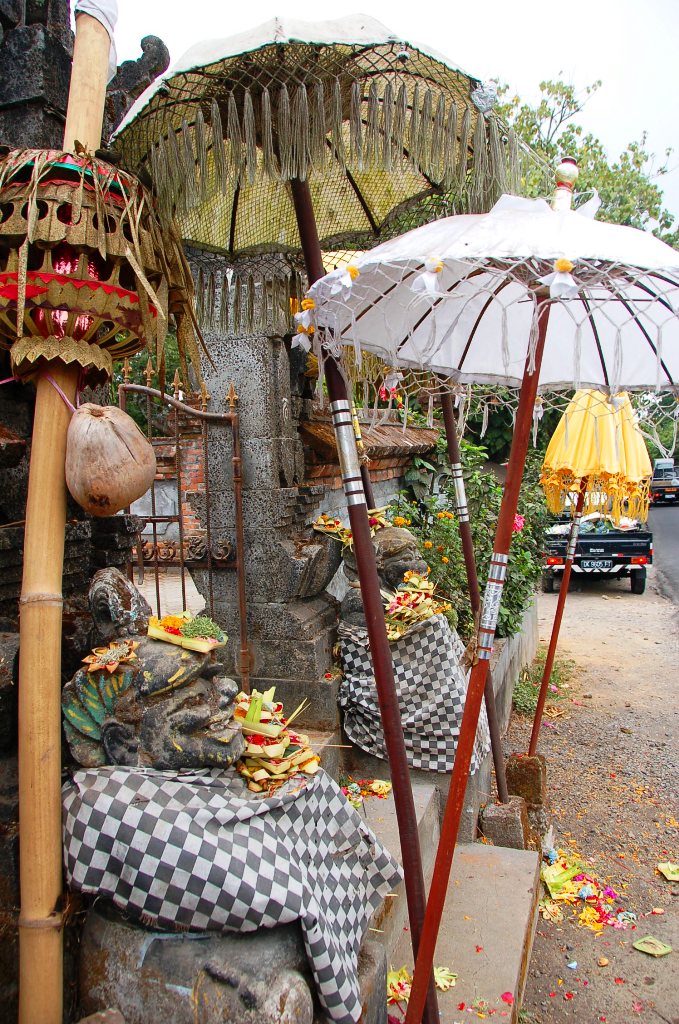 Starting with the most recently visited, this tiny temple (whose name I don’t know) overlooks the twin lakes Danau Tamblingan and Danau Bayan. The temple itself is a small, open-area affair right off the main road, surrounded by a tiny parking lot hosting vendors who, for a small fee, will let you pet their … lizard.

Maybe even a bewildered-looking fruit bad. 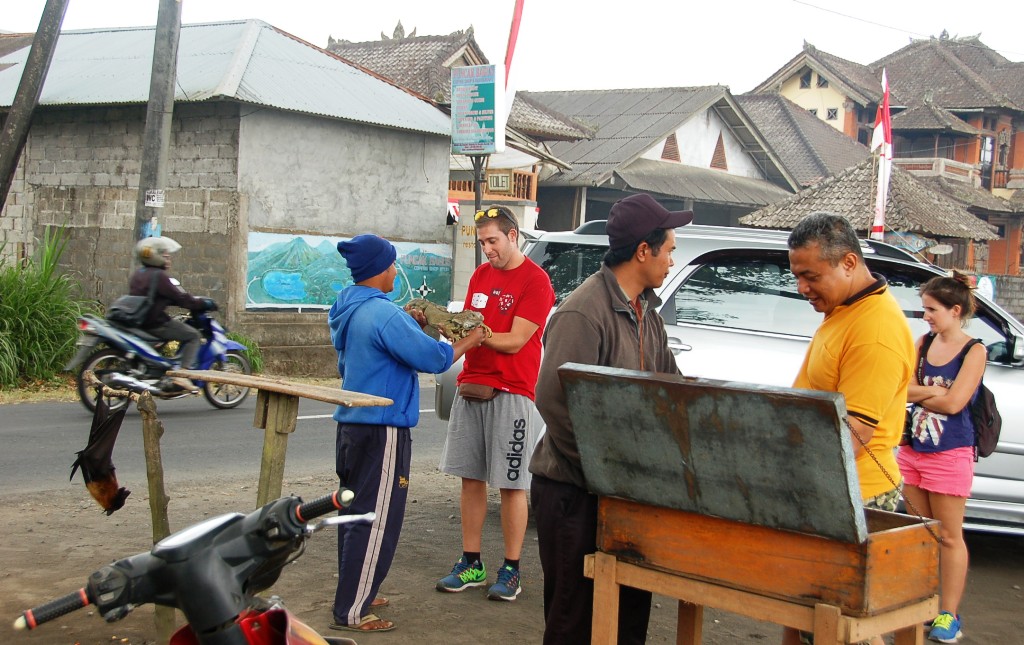 This area offers a scenic rest stop for travelers going between the mountains near Munduk and the rice terraces of Jatiluwih (or vice versa), and what makes it interesting is the view mostly. Unlike Pura Ulun Danau Beratan, no mention is made of this humble holy site in my guidebook, so maybe it’s just that it is one of those random, unexpected things that I like about it. Also? The offerings looked pretty groovy. 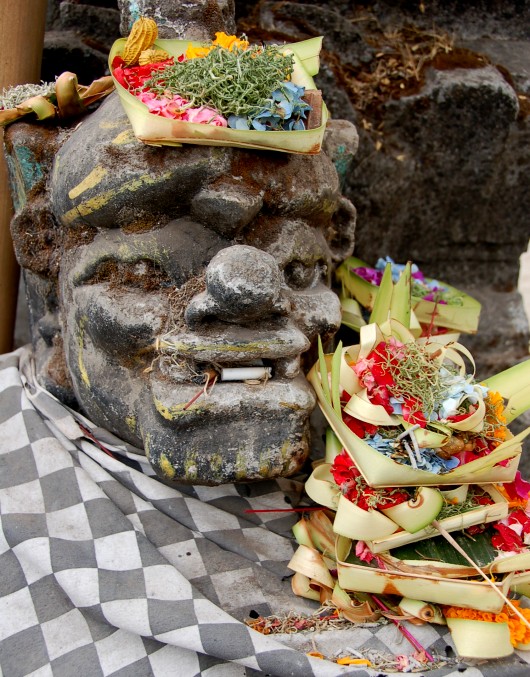 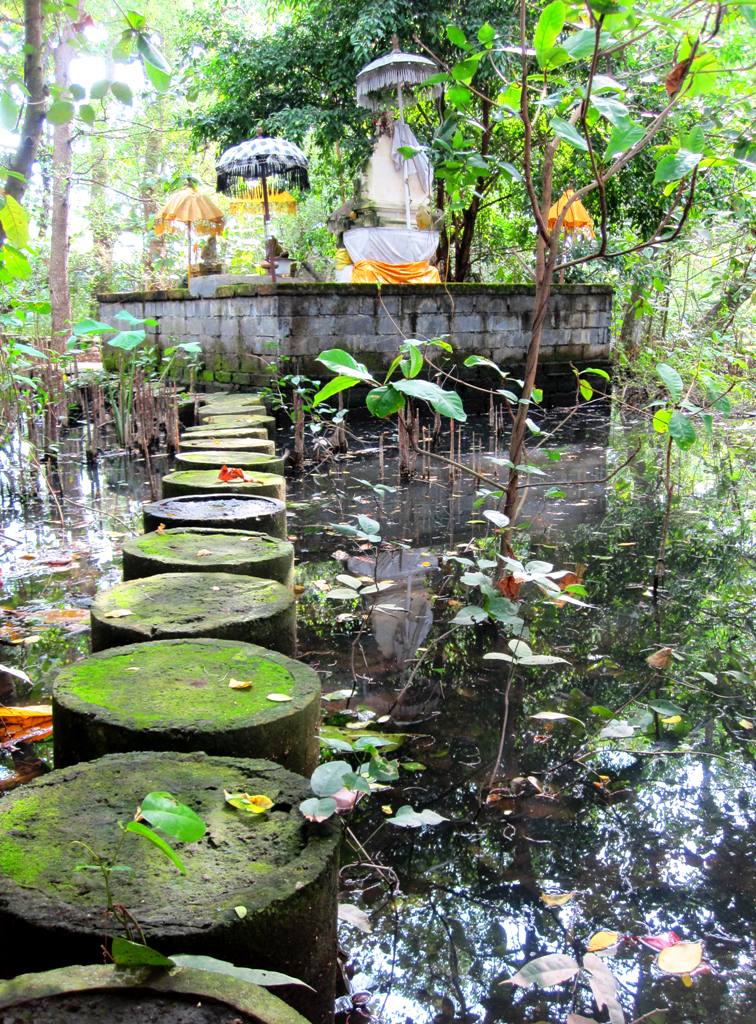 Sam and I discovered this place while strolling around the Sanur area. We were in what I think is Pakraman village, where the landscaped grounds surrounding the mangroves showcase bizarre statues that, despite their gruesomeness (or maybe because of), kind of caught my photographing fancy. 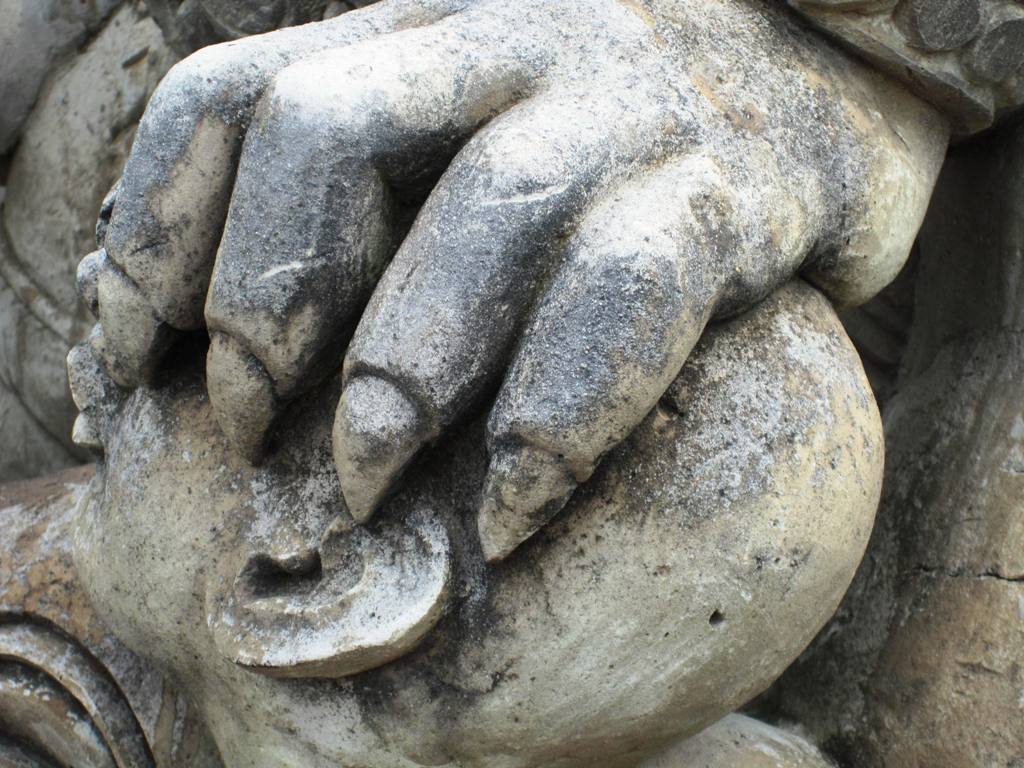 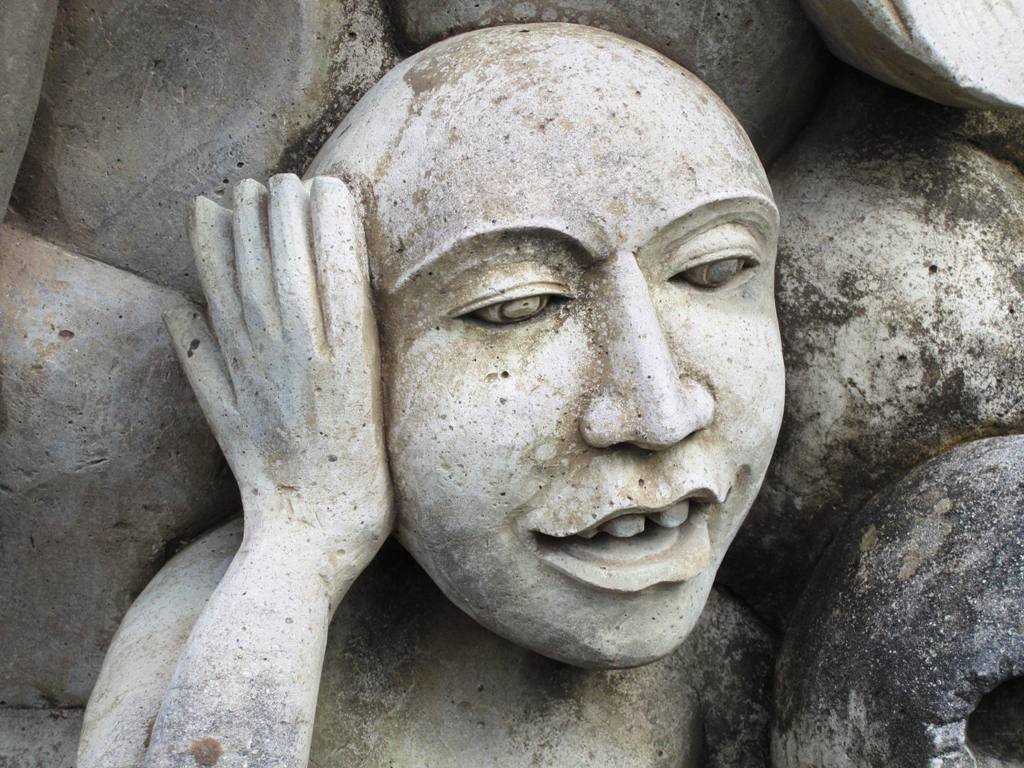 And then, we saw a little opening in the cement perimeter separating the grounds from the mangrove forest, where round, moss-covered pavers led to a floating temple! There was something magical about “discovering” this place; probably because we were able to visit it without another soul to be seen. 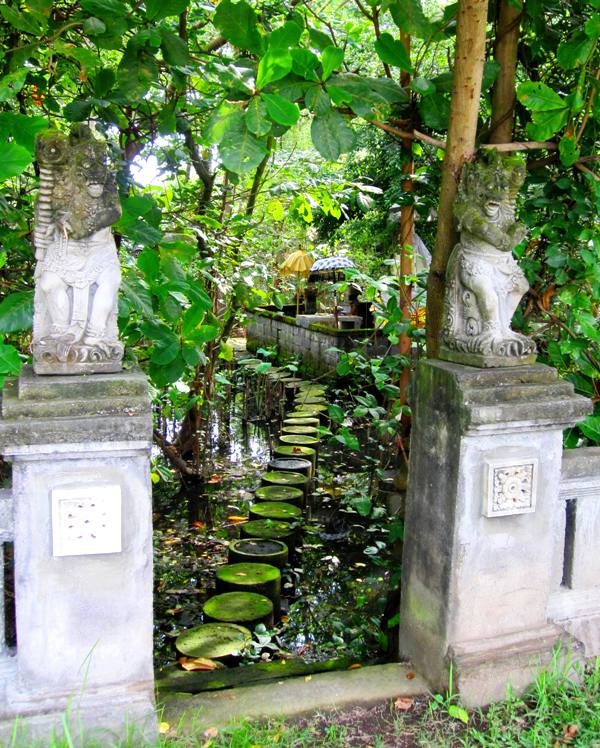 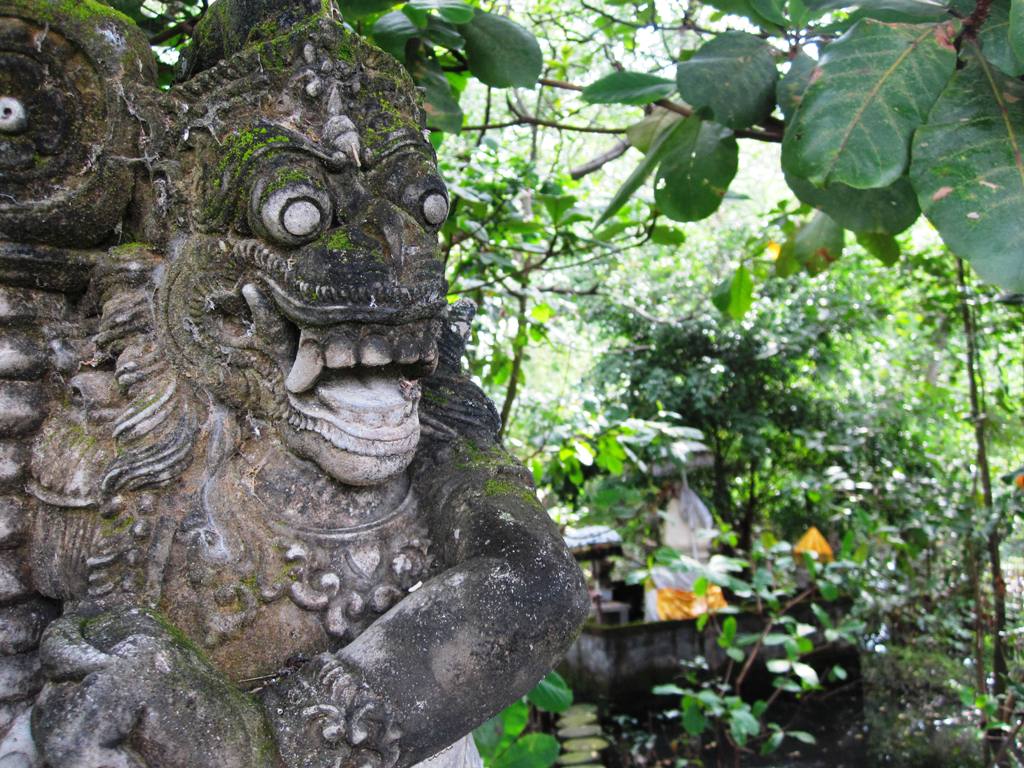 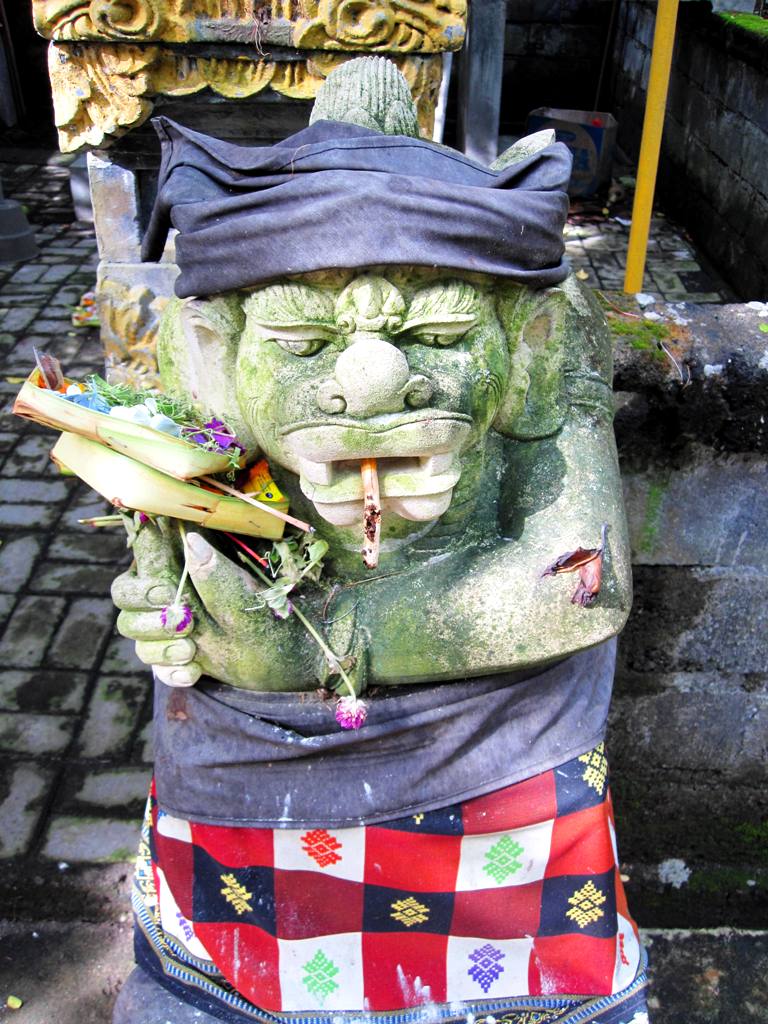 (In the town of Bedulu, just outside of Ubud) 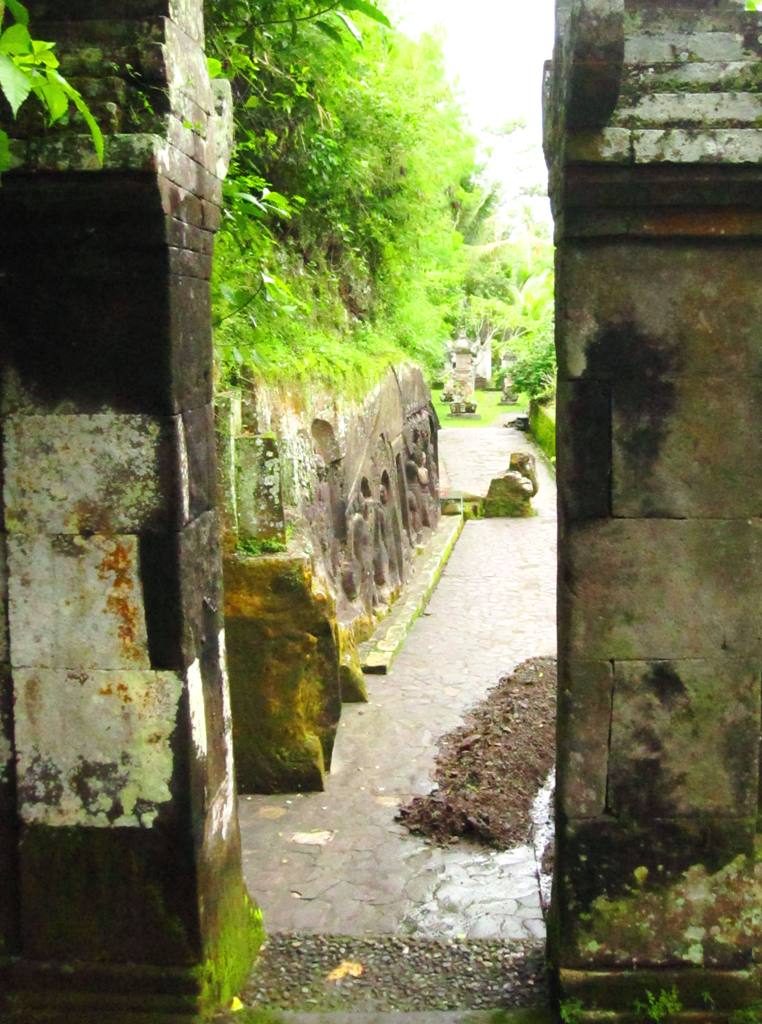 We read about Yeh Puluh in our guidebook while taking a DIY bicycling tour of the Ubud area. Yeh Puluh is an ancient cliff side facing verdant rice fields, where eroded Hindu reliefs from the [estimated] 1300s are colored by patches of moss and algae. The walk along the reliefs leads to the tiny ruins of what is believed to have been a hermitage. 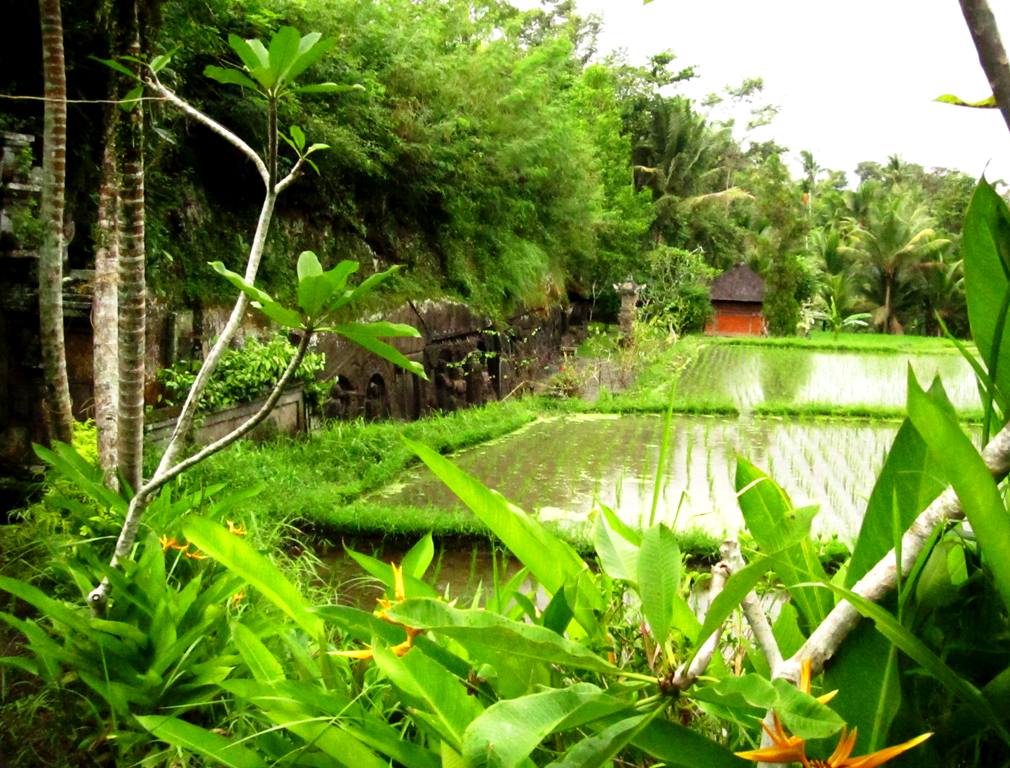 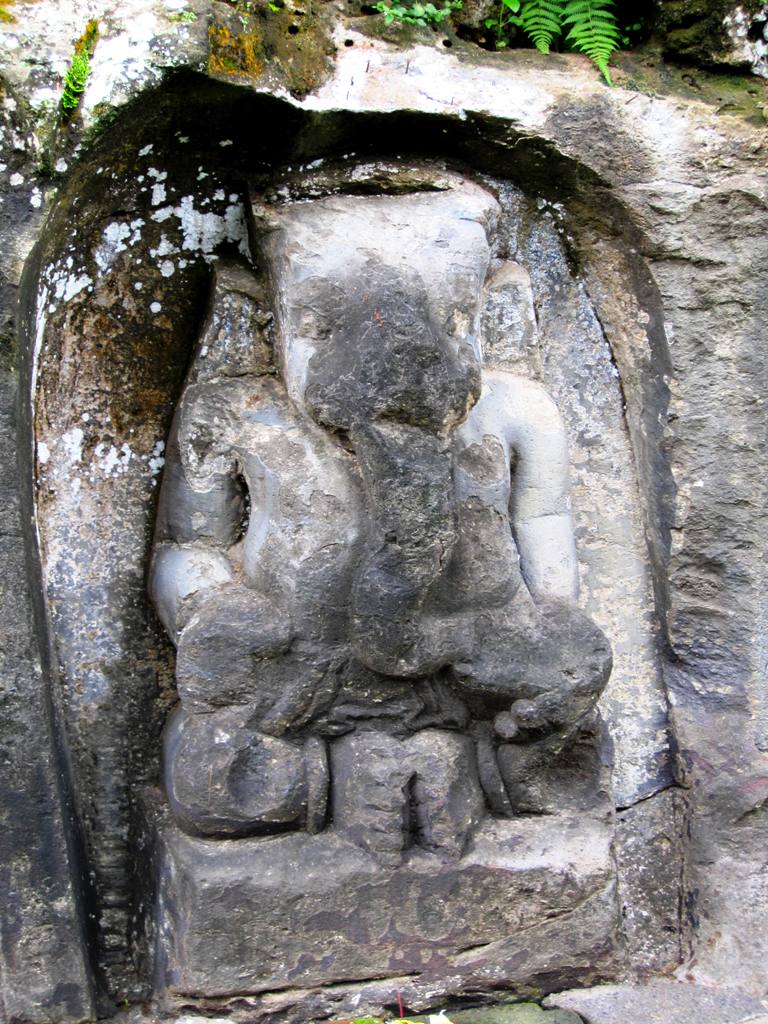 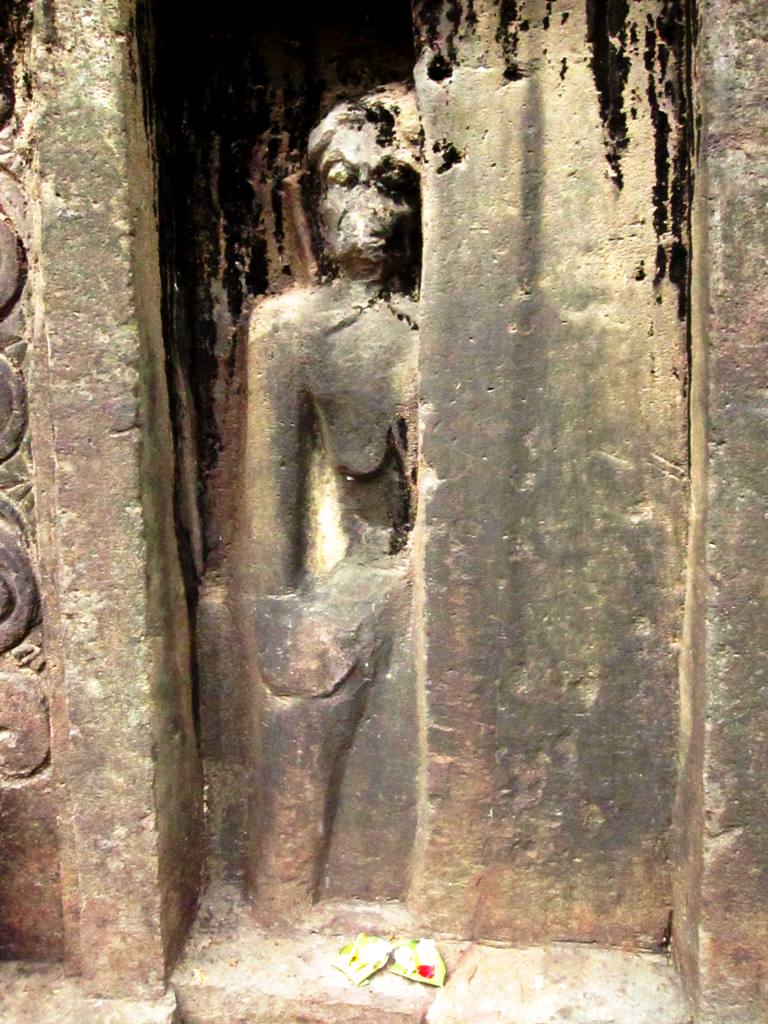 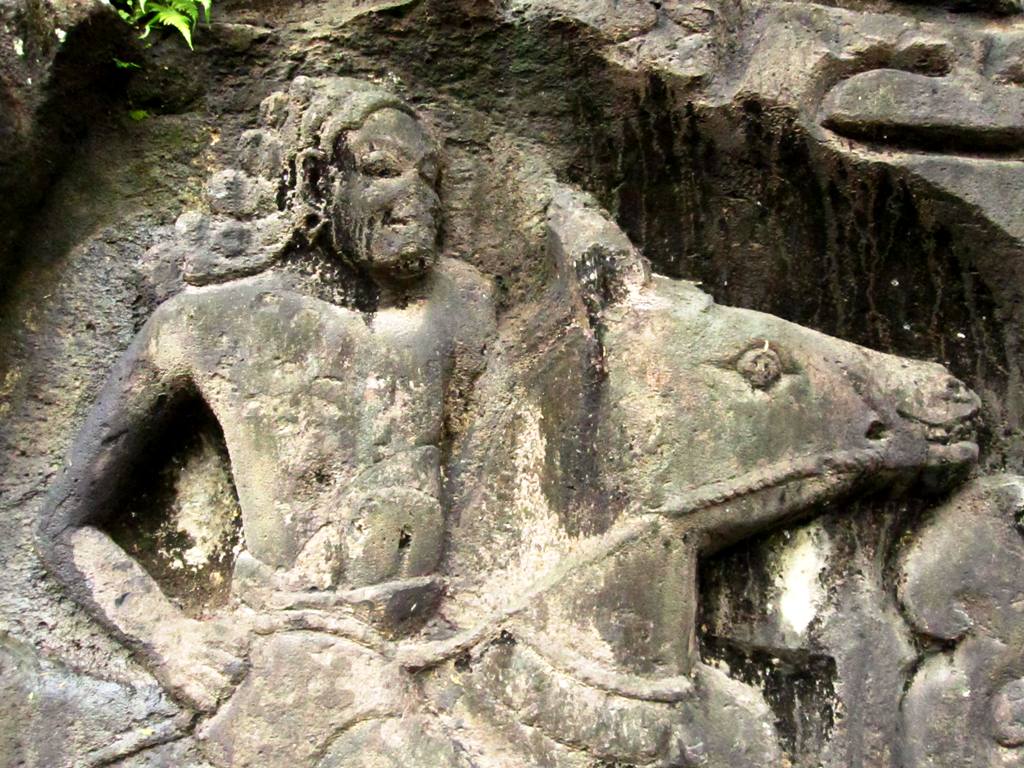 The ambiance really makes this place, and it certainly helps that, like the mangrove temple in Sanur, we were the only ones there.

Yeh Puluh is in the Bedulu area, and is just under five kilometers (under three miles) from Ubud central. We stopped here after taking in the holy site of Goa Gajah, but as that is a far more visited site, has interesting photo opportunities and is definitely not obscure, I’ll save that for the Magnificent! 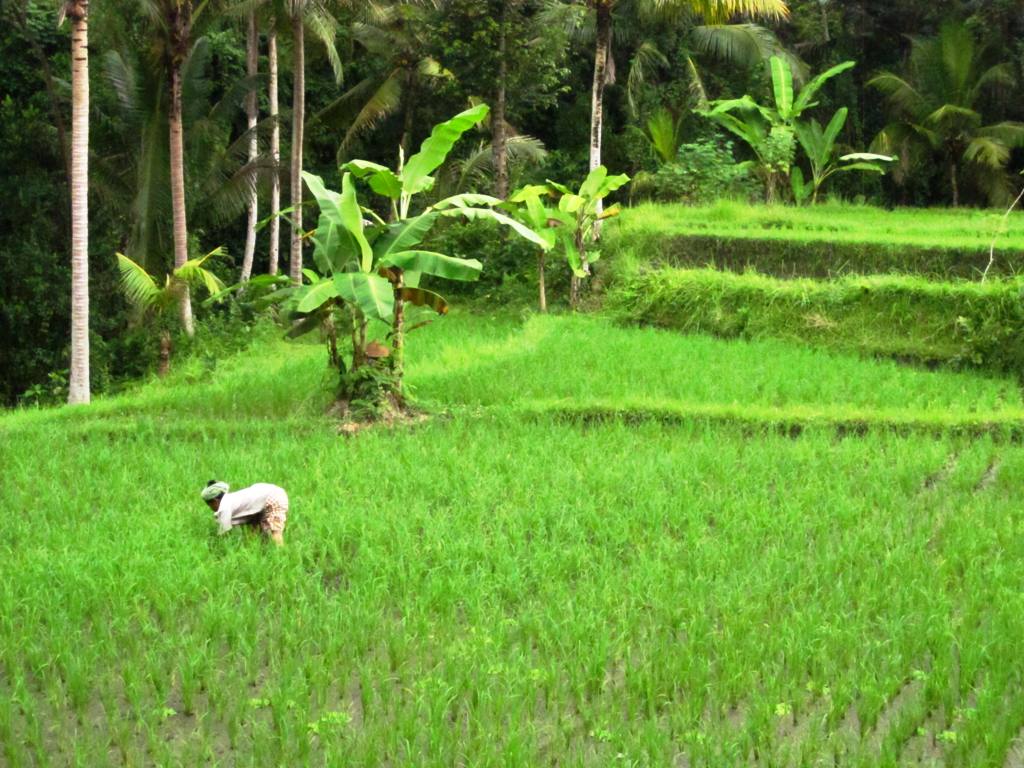 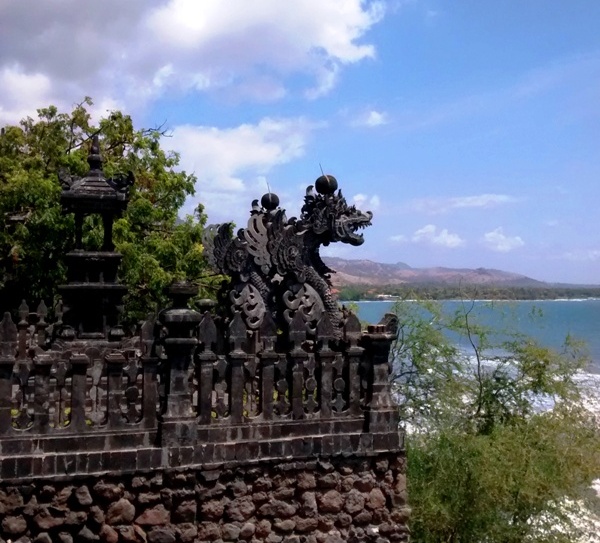 This temple is perched above the sea near Bali’s north coast town of Pemuteran. Pura Pabean isn’t hard to find — its downright conspicuous, in fact — but I’ve got it under Obscure simply because it is rarely mentioned by guide books or sites discussing Bali temples. I’ve done a whole post about the Pemuteran area — including the temple Pura Pabean, which you can read about here. But my favorite thing about this place is the strange statues at the bottom of the curved staircase, leading from the the main temple grounds. The scenery surrounding the temple is stunning, with its arid, terracotta mountains rising above black sand beaches, making it completely unlike anything south or central Bali has to offer. 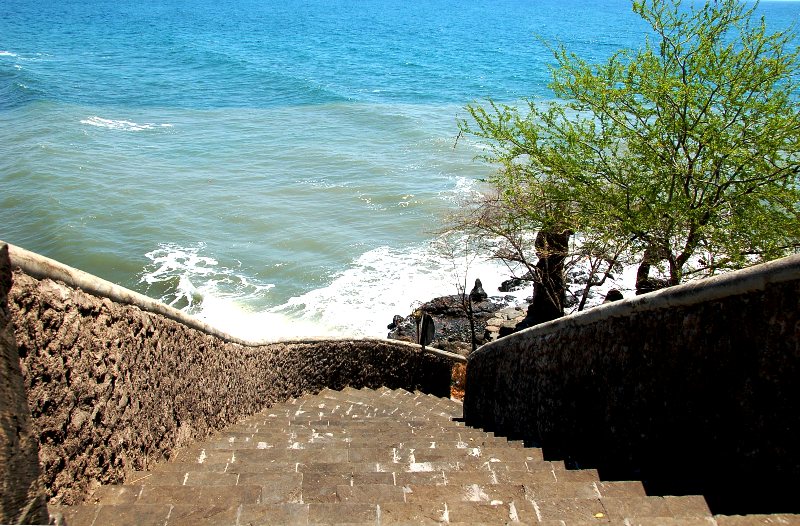 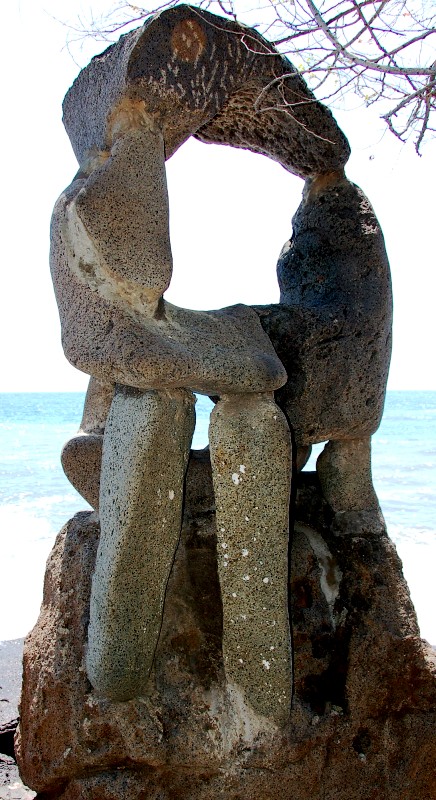 Map of Bali Temples and Holy Sites below: The Obcsure, the Hyped and the Marvelous