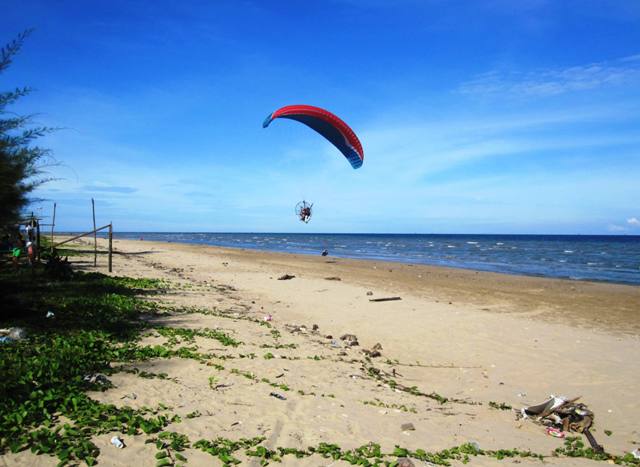 Manggar Beach lies about 21 kilometers east of downtown Balikpapan, East Kalimantan, and though it isn’t even close to the white sand and crystal blue waters of one’s dreams, it’s got something else to offer that’s completely unique.

Try visiting on a Sunday afternoon when bizarro homemade, self-propelled paragliders weave treacherously between picnicking families, girls dig for mussels amongst watery tree roots, and farmers tend to their zucchini and tomatoes in the pretty garden plots that outline the area. At high tide, you can walk (or even better, ride your bike!) along the beach until a canal and the sea force you up into the fields. No worries about that, because riding along the tiny paths snaking between vegetable gardens, fish hatcheries and the random dirt-bike circuit is tons of fun — mostly because everyone you pass has nothing but a grin to offer … except the random farmer who will ask if you want to pick vegetables from her garden! (Which we thanked her profusely for, but declined.)

And at low tide, you can travel on the packed sand from Manggar all the way to Lamaru Beach (yellow indicator in map below), and if you are lucky to return to Manggar by sunset, keep traveling along the beach, past the starting point, until you reach the mouth of the Manggar River. There, fishermen chug out to sea in brightly painted boats as the orange glow of the setting sun spills over the water. The air smells like fish and salt and seaweed. Strange things like washed-up jellyfish and stranded hermit crabs lay on the sand. Groups of kids play soccer, the sound of their laughter mixed with the cawing seagulls swooping overhead.

In short, Manggar Beach is full of life, and the kind of life that only Balikpapan has to offer. So here’s a photo tour of one of our favorite places to go:

Starting at Manggar Beach, where stalls sells everything from grilled corn on the cob to beach wraps, we encountered a relic from World War II. According to a friendly man who chatted with us a bit, many Japanese bunkers and sections of tanks are still being unearthed in the area. 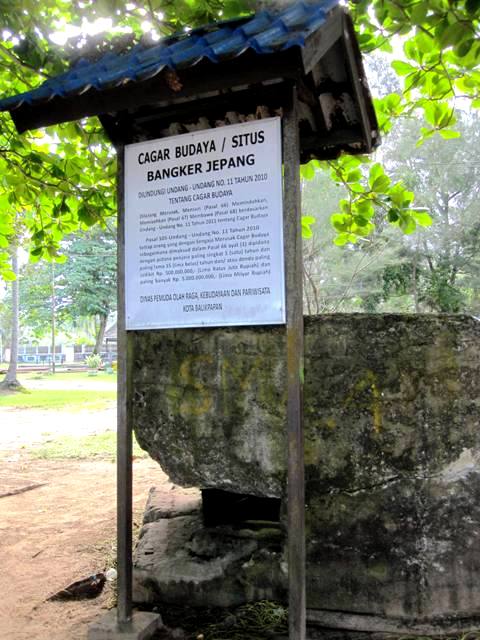 And while we didn’t see any WWII excavations taking place, we did spot several people excavating fish… 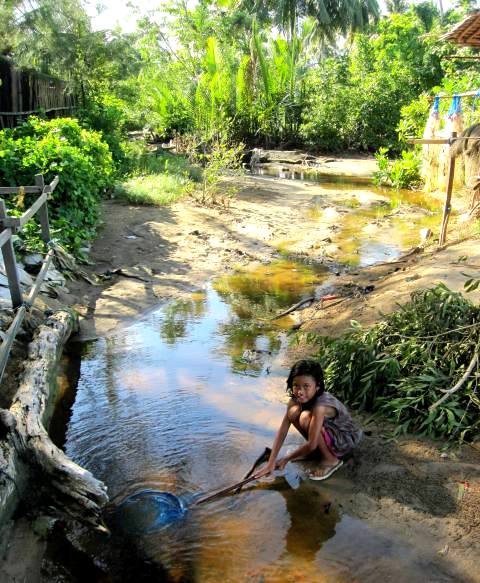 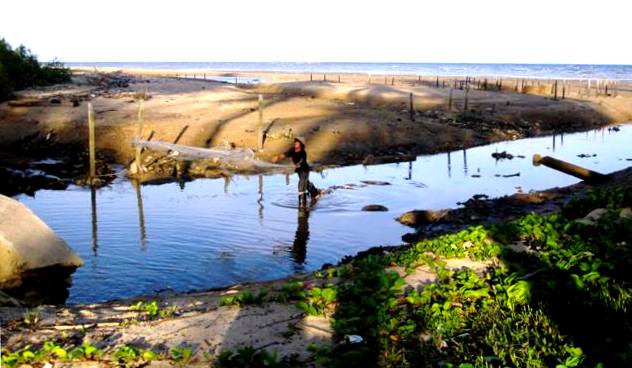 Riding on Manggar Beach at low tide is the flattest ride you’ll ever find in Balikpapan. The sand is quite firm, and provides popular Sunday riding for scooters and motorcycles as well. Following the beach northward, a canal intersects, forcing you off the beach and into the pretty fields. Just follow the canal until you find a wooden bridge spanning over  the canal to your left. Cross that and you’ll find yourself riding through fields of vegetables shaded by coconut trees, fish farms, ramshackle dirt bike trails and highly questionable bridges that you must cross to keep going and reach Lamaru Beach. 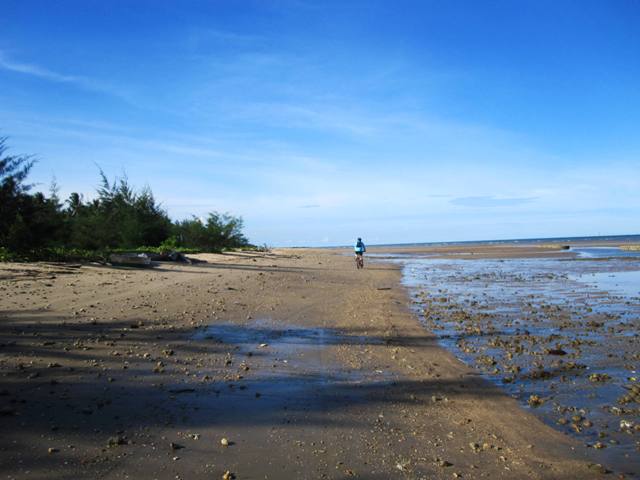 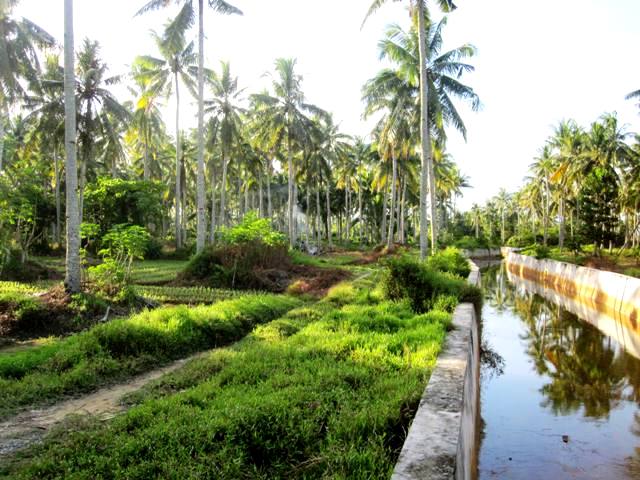 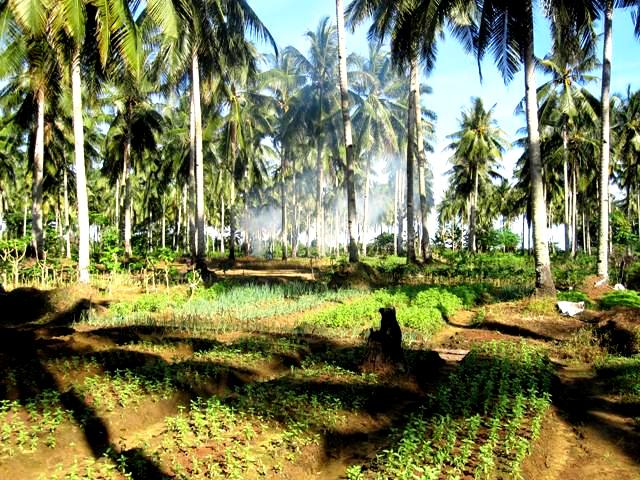 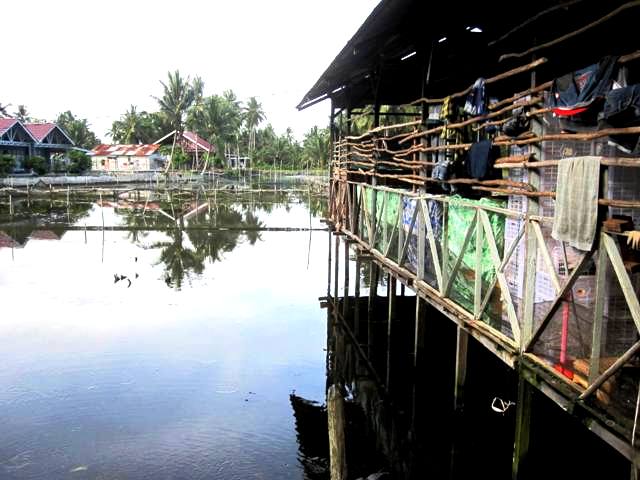 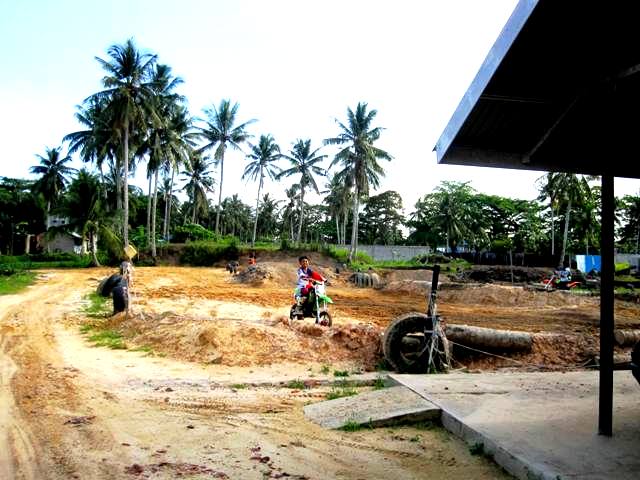 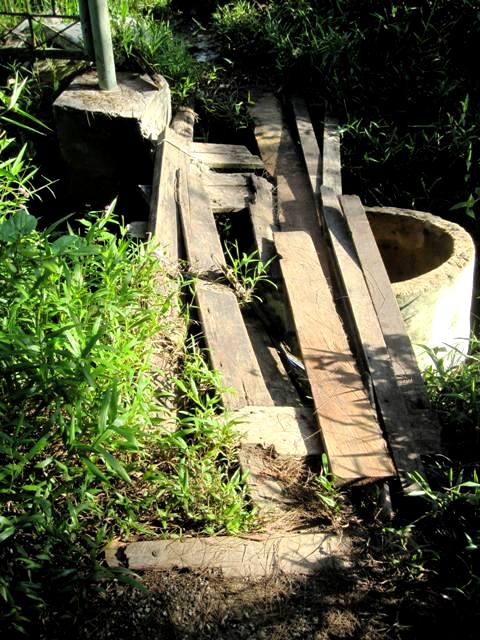 And should you need to use the facilities, never fear. The stalls along Manggar and Lamaru beach have lots of public toilets such as this one (but bring your own toilet paper!). It’s actually quite clean, but if a shed isn’t your style, the bathrooms at Lamaru beach are much nicer (though still squat-pots). I actually found using this bathroom quite amusing and a bit touching. Though the sign by the stalls asks for a donation of money for bathroom use, when I asked to use the toilet, the nice lady just smiled and waved me forward. Her husband was doing something with coconuts just outside the bathroom shed, which made me a little self-conscious, but as soon as I closed the door, I heard foot steps and then, the next thing I know, the guy is watering some plants with a hose outside to give me some privacy! Now, where else in the world would you find such consideration? Seriously. 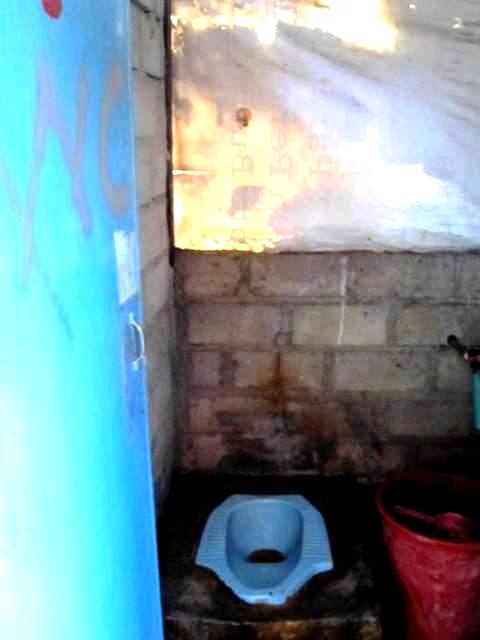 Nearing Lamaru Beach, we came across two friends, Siut and Siti, looking for mussels (kerang) at low tide. We passed them on the way from Manggar to Lamaru, and I had to ask them what they were doing. When I took this photo, she was still digging around in the tree roots. I left feeling worried that I’d annoyed them with all of my questions and picture-taking. 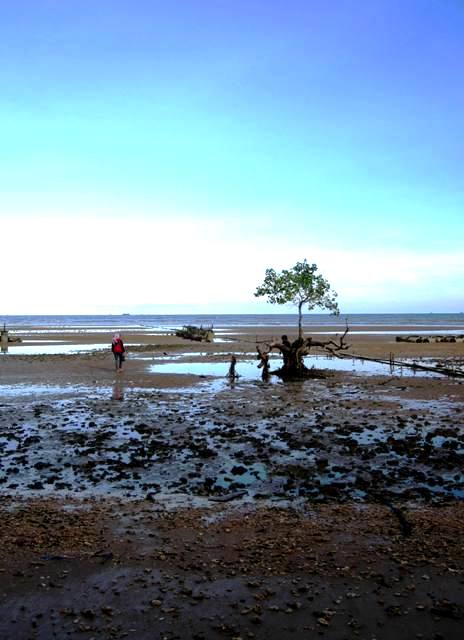 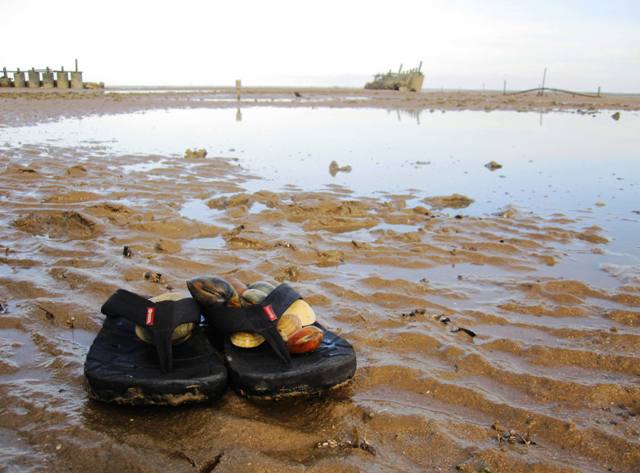 But then, on our return from Lamaru to Manggar, we rode our bikes past where Siut was smoking her mussels with a fire made from palm branches. To our surprise, she called us over to try them! This was especially kind of her since she only had a handful of mussels, but I was too curious to refuse the offer. Sam and I tried a portion of one and we both agree, it was absolutely delicious! Smoky and a little salty, a little like smoked salmon. So good; I could eat an entire bowl. She said they are especially good with white rice and kangkung. I believe her. 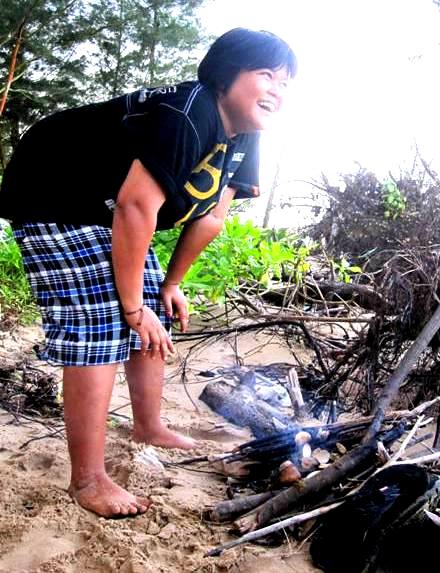 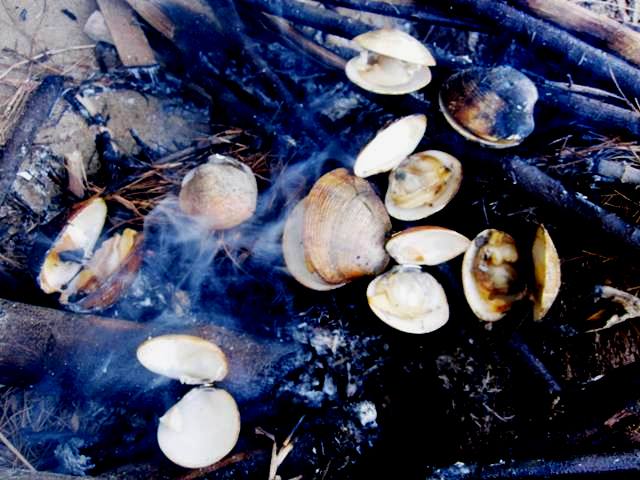 We also encountered a young man digging for koa koa. Poor guy. I kept trying to figure out what a koa-koa was, exactly. Some sort of mussel? Perhaps a crab? This, he finally displayed after some effort, is a koa koa! Apparently, these strange white worms (that is a single worm wrapped around his hand by the way) make excellent fish bait. 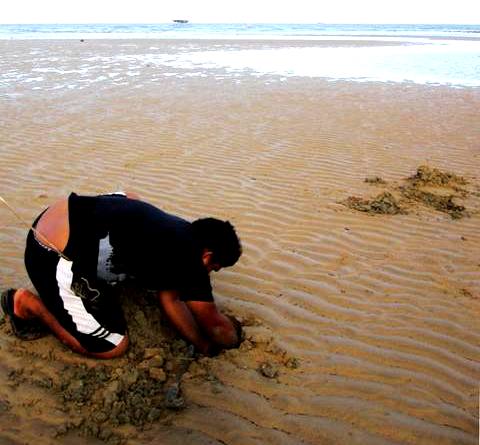 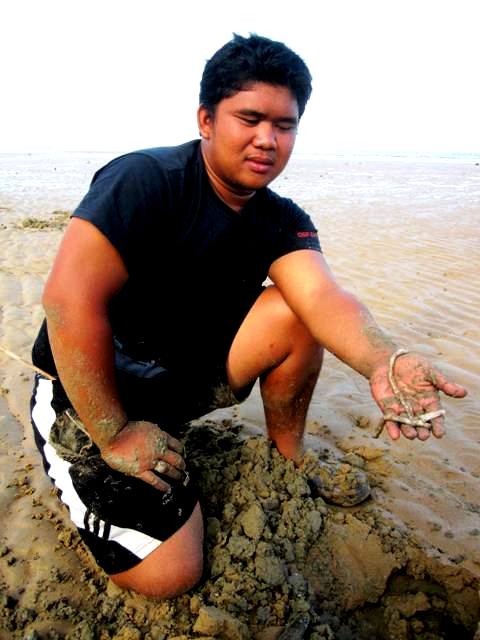 And then, of course, there are the random scenes such as this abandoned hut where one can update one’s Facebook status (the guy against the wall has an iPhone), or finding a happy group of kids lounging on a hammock and a bright aqua vinyl couch under a grove of trees. These kids called me over while we were riding along the beach, and when I approached, they offered me a coconut! Then the one in the hammock told me that she recognized me from the week before when Sam and I had ridden bikes in the area. When I apologized for not recalling meeting her, she said, “That’s because I was in a tree, and I yelled at you but you didn’t hear me!” 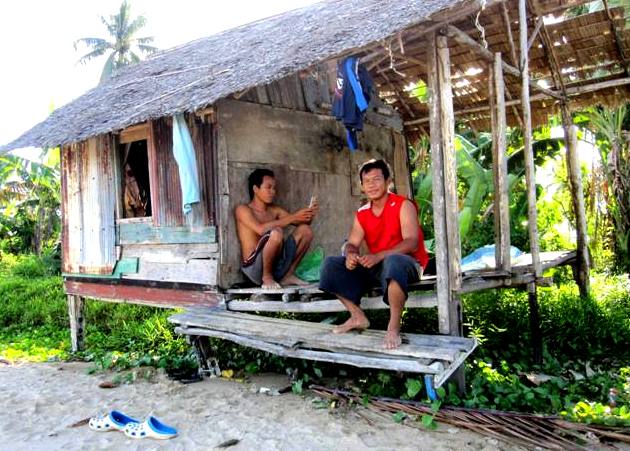 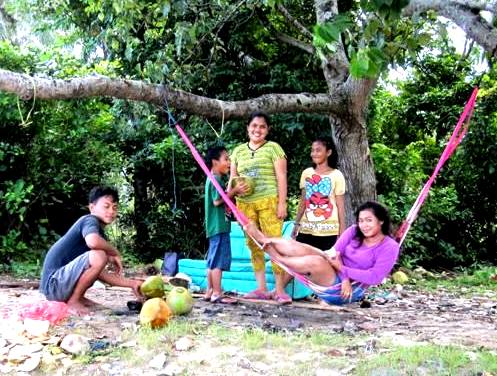 Turning from the beach, we wound through tiny villages (kampungs) and more vegetable gardens of water spinach (kankung) and tapioca (tapioca). The sweet lady in the photo immediately below offered to let us pick some veggies for our supper. The farmer with the amazing smile worksacross the street from the woman. He’s got a President Jokowi T-shirt on. Lots of the Jokowi-themed posters and whatnot are decidedly Obama-campaign-art oriented. 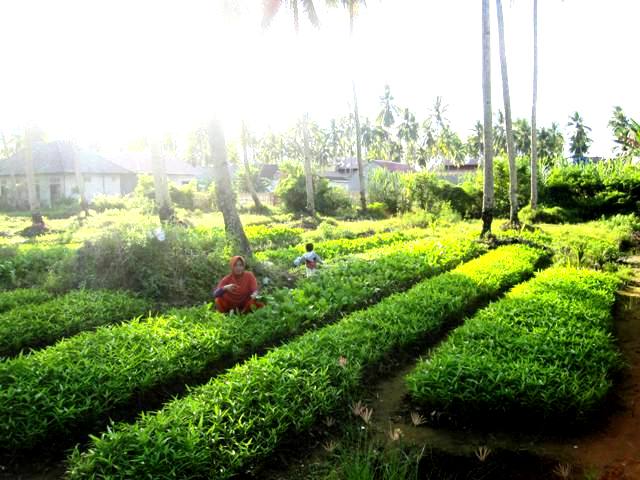 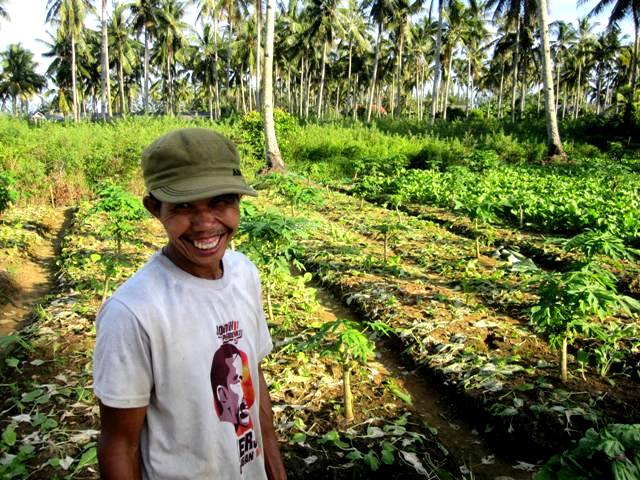 Once back at Manggar, we road toward the mouth of the Manggar River to watch the sunset, dodging washed-up jellyfish and the strangest boat anchors we’ve ever seen in our lives along the way. 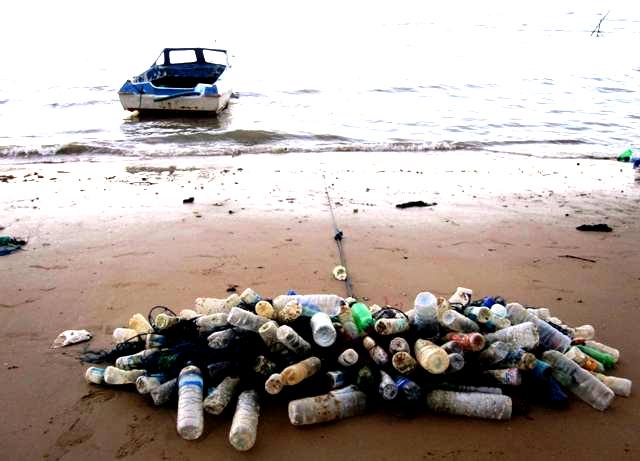 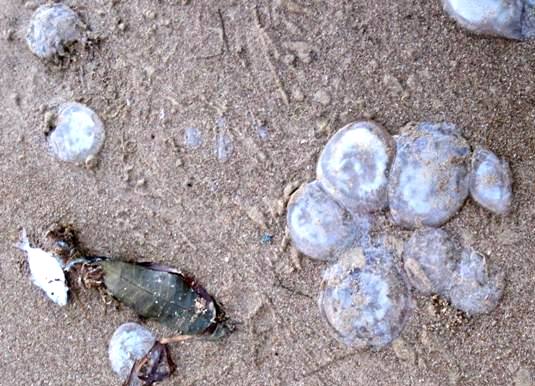 At the mouth of the river, a fishing village spills over the sandy shore where elevated beds of fish dry in the sun. The man whom we encountered, Ambo, explained that the fish dry on these tables overnight and then for two full days before the process is completed. We were fascinated that the fish could stay out so long without being eaten or otherwise absconded, especially with the cats walking about, but as far as we could tell, Ambo had those animals extremely well trained! 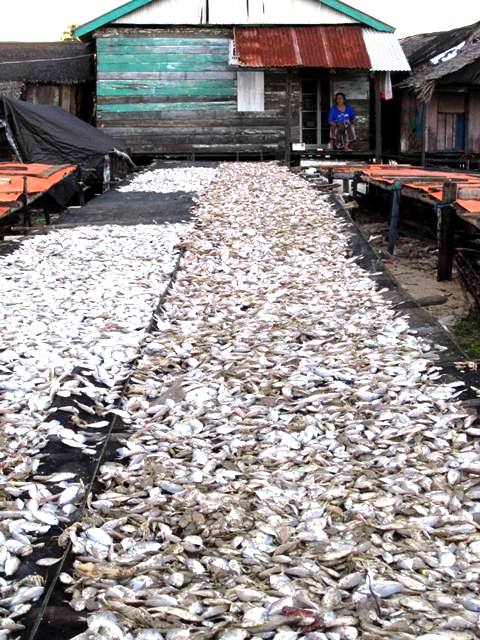 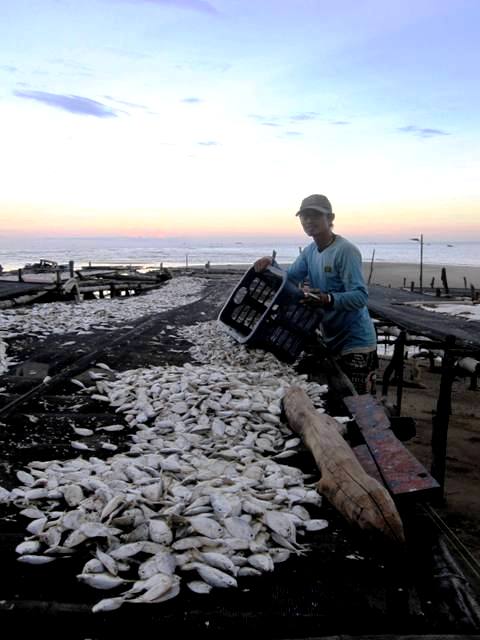 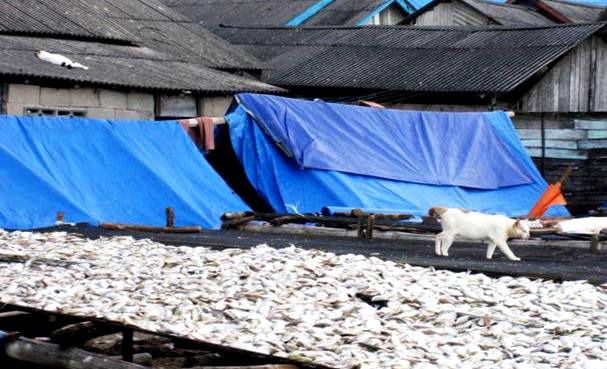 So that’s our Sunday ride at Manggar Beach. We didn’t get any swimming done (not because of the low tide, but because of the icky water), but the friendly people and interesting activities made up for the rest of it. And where else in the world would I learn what a koa koa is? 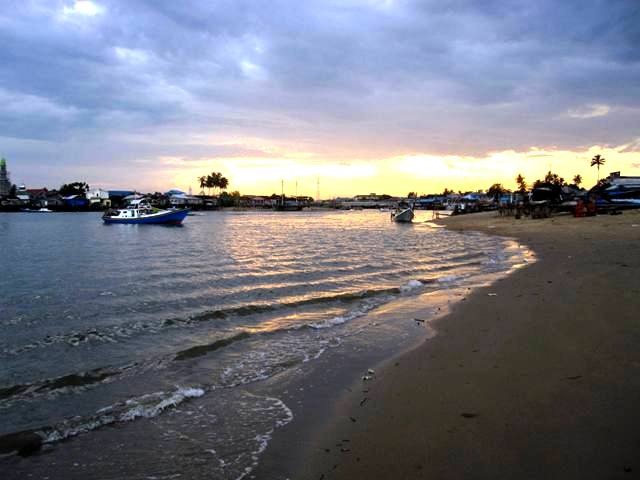