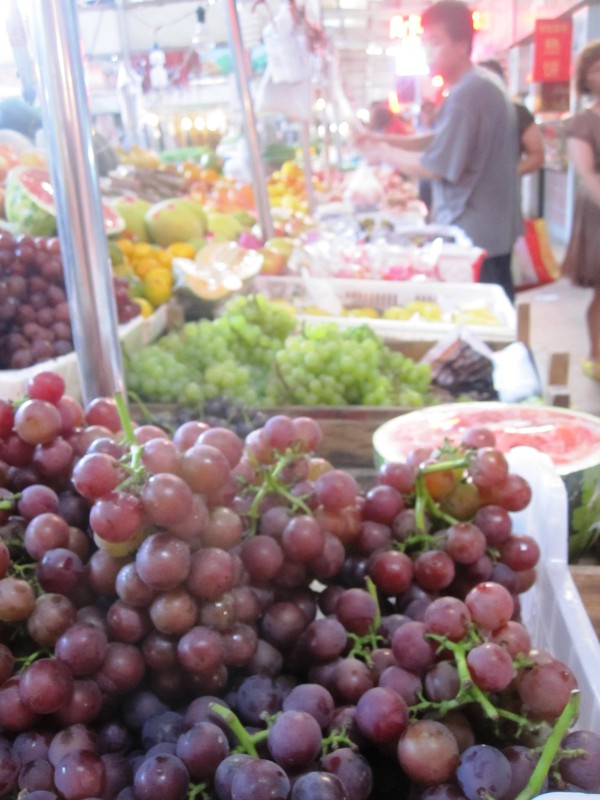 In this episode of culture shock in China via silly-expat-speaking Mandarin gone awry, the fresh markets of Tianjin set the stage.

I love the fresh markets in Tianjin, actually.  I never thought I’d find a place to rival what Tonga’s Meketi Talamahu had to offer, but I’ve got to say, the fresh markets (also called “wet markets”) here are probably winning.  It isn’t entirely fair.  A city with a population of 13 million or so can hardly be put in the same league as an island of about 30 thousand total.

Still, Tianjin continues to surprise with its huge selection of fresh fruit, vegetables, fresh eggs, seafood, meat, bean and grain products, sausages, etc.  And, it seems there is one of these fresh markets around every mile or so.  My favorite, up until this weekend, was a smaller one about three blocks up and two blocks over, just before the crossroads of Youyi Nan Lu (“Friendship South Road” in English) and Zhujian Dao (no idea about that one).

Not only is this market the closest one to our apartment that I’m currently aware of, it also has a shopette at one end (that actually stocks Coke Zero!), kiosks about the side selling fresh pork and ground beef that Sam swears make the best burgers ever, and another kiosk that offers decent dark beer selections at really good prices.  Enough said.  Oh, except this: outside, there is a great little stall that steams delicious mini baozi’s for take-away.  I can get a bag of eight for one USD!  I rest my case.

The Befuddling Culture Shock of Pinyin

So I set off for this market over the weekend to stock up on supplies.  I hit the Coke Zero’s first, because they always run out, and grab a bag of eggs, too.  The cashier is a young guy who always smirks at my Coke Zero hording, but I try to ignore that.  I cash out of the shopette and make my way over to the vegetable vendor whom I really like, but whom I also really, really wish would make a bit more effort when enunciating his prices.   This conundrum, I realize, is difficult to empathize with unless a person has also endeavored to understand the linguistic terror that is Chinese Pinyin.  To the good people who created Pinyin as a way to supposedly phonetically represent Chinese words with Latin letters:  Pinyin annunciations sound nothing like the way they are spelled.  Nothing.

In any case, I’ve done enough Pimsleur and practiced enough with locals to have a loose command on my number system.  But this all goes out the window when I encounter my veggie vendor.

His “shiyi” [eleven] sounds like “sa,” his “shiwu” [fifteen] sounds like “sue” and his “sanshi” [thirty] sounds like … I don’t know.  It’s worse than discerning French.  I try, I really do, but inevitably, he gives up, punches numbers into a calculator and then thrusts it at my face.  I pay and move on to the fruit stall.

And here’s when my Saturday goes south.  I pick up some apples and bring them to the scale.  Looks like its two apples for ten Yuan, not bad, so I ask about a small cluster of grapes.  The scale announces those to be thirty or so Yuan, which isn’t horrible, but five bucks USD for a tiny cluster of grapes isn’t that great, either, and we’re on a budget.  So I try to ask him if they are good.

“Hen hao, ma?” I smile, pointing to the grapes.

The man looks at me like I said inappropriate things about his mother.  But I’ve used this phrase before with much success, and feel confident I’ve got it close enough to be understood at least.  I attempt again, this time trying out my “to be” verb with it:

He glares.  I try to look apologetic and mumble a “sorry” in Mandarin.  I glance over at the bananas, contemplating the addition, but then I realize the vendor has gotten up and is placing the grapes back into the grape cart.  Now, he’s walking to the apple box and is placing my two apples back as well.  I look from him to the box, confused.

“Keshi, wo xiang mei,” I say, pointing to the apples.  This is supposed to mean, “But I want to buy.”

He glares and shouts something that I take to mean, “But I do not want to sell them!”

Business chatter freezes at the market place.  Some people glance over, curious.  At this point, I should just say sorry and walk away or something.

Alas, to my great mortification, I do not choose this option.  I do not know if it is the heat, the general state of confusion in which I have found myself for the past two months, or the polluted air that has most likely contributed enough carbon to my lungs to qualify my body as fossil fuel, but somewhere in recesses of my culture-shocked brain, I think it’s a good idea to keep trying.

“Go away, you blight upon humanity!” he shouts in Mandarin.  Or something along those lines.

I don’t even know how to ask what is happening – I haven’t gotten that far in my Pimsleur yet – so I look around and ask the young guy who sells me Coke Zeros if he can speak English.

He shakes his head and looks away.

Even I realize by now that I need to just go.  So I do, fighting the swell of emotion that is suddenly overcoming me.  The man I buy beer from says something to the fruit vendor, but the vendor just scowls and shouts, pointing at me.  I head to the door, humiliated, but the beer guy stops and brings me another plastic bag, insisting I place my goods into it for fortification.  I’m too dazed to know how to respond, so I just stand there and fumble with my things as he double-bags them.  His kindness to me is more than my fragile, sunburned, Mandarin-screwing-upping self can handle.  The tears begin to well.  I can only nod a thanks and then hop-to out of there before I dissolve into idiocy.

I walk to my bicycle and stuff my things into the basket.  I didn’t get my beer or my boazi, but I do wobble off as fast as I can.  I nearly run into a pedestrian, but I swerve just in time and offer my Dui bu qi.

The whole way home, tears leak down my face and it is so humiliating.  I can’t help it.  And I don’t know why I’m so upset.  But it doesn’t stop the crying.

Workmen stop and stare.  And that doesn’t stop the crying.

I get home, haul my bike and my things into the tiny elevator and make it to my apartment on the ninth floor.  I’m still blubbering as I unpack my groceries and realize I’ve smashed half the eggs.  This, for reasons I can not justify, makes me laugh.

So, it is now a few days later and I think at some point, I will stop being embarrassed about it.  It’s the crying part that really gets to me, but I’m sure I’ll get over it.  I’m sure.  But most importantly, I realize that even if I do get refused service and publicly humiliated by a fruit vendor for no understandable reason, I would still rather be having this experience than not.

But most importantly?  I need hit that Pimsleur like my life depends on it … or at least my dignity.  As in, xianzai!

2 thoughts on “Culture Shock in China: The Grapes of Wrath”